Tonight, one of the most surreal seasons of reality television will reach a fever pitch as Bachelor Chris decides whether or not to bed three women, including one secret virgin, on broadcast television. Verge editors Emily Yoshida and Chris Plante discuss what has made this season of The Bachelor so perversely momentous.

Emily Yoshida: So Chris, I think you and I agree that Chris Soules' season of The Bachelor was not one we would have predicted to Go Weird. And master of rose ceremonies Chris Harrison (too many Chrises!) has become a little bit of a host who cried wolf — when every season is "unlike anything we've ever seen," doesn't everything just become uniform in its lack of precedent? Here in the 19th season of one of the longest-running reality TV franchises, what does it mean to be shocking anymore?

But something really bizarre has been afoot in these last several weeks. It's almost as if the producers anticipated audiences' lukewarm reaction to the shrug-inducing "Prince Farming" premise of Iowa farmer Soules' search for love, and wildly overcompensated by throwing in a higher-than-usual concentration of virgins, moms, widows, and women of questionable mental health.

what does it mean to be shocking anymore?

But it's more than just having a bunch of wild personalities on hand. Somehow on this turbo version of The Bachelor, the show has become itself super hard (even on a season with a distinct lack of the show's signature exotic locales). It almost feels like a series finale: all the themes Bachelor fans have come to know and expect, run back and turned up to the point of distortion.

I don't even know where to start. Ashley S.?

Chris Plante: Maybe we should have seen this coming.

I’m a sucker for reality television Wikipedia, an information spiderweb that covers most of the globe, with particularly sticky bits in the US, the UK, and the Netherlands. Spend some time there, and you see everything is derivative — any US reality show can probably be traced back to some niche, Swiss, made-for-TV documentary about husbands and wives that hate each other.

One of my favorite wikis is for Farmer Wants a Wife. What was originally a British reality program about a farmer who, as you might guess, wants a wife, has now been remade in more than 25 countries. The show was broadly well received, despite being the most boring romantic premise imaginable. I have a theory about its success: when reality television producers are stuck with nothing — an emotionless farmer, an endless patch of land that makes every shot look like the one that came before it, and a gaggle of female hopefuls eagerly dropping their lives like litter on the curb to move onto a farm in the middle of nowhere — they’re forced to get weird.

this is dogme 95 bachelor

What I’m saying is, this season of The Bachelor, which, until tonight's episode, has managed to stay entirely within the United States, and which is burdened by a Bachelor with a low saving throw for empathy and personality, has been forced to be creative. This is Bachelor by way of Dogme 95.

Imagine the prep meeting: No charming lead. No exotic locales. Very few helicopters. How do we make this work?

That’s what we’re watching: a handful of the best producers in reality television making it work. For the first five episodes, the editors digitally blurred one woman’s butt, whether it was a revealing shot or not. In the last episode, they interviewed a woman’s hand puppet, then layered her face over a B-roll shot of a full moon.

This is a sweat act. Which leads us to my one big problem. Because the show seems even more self-aware than usual, I’m not convinced half of the women aren’t actresses in on the joke. You mentioned Ashley S., who I worried was a person with mental issues being exploited by the program. But now, I don’t know. I look back on that video, and I see a Kristen Wiig character.

Am I just jaded? Speaking of, remember that time Farmer Chris dumped front-runner Jade because she posed in Playboy, several nights before he was scheduled to sleep with three women provided to him by a national television network? 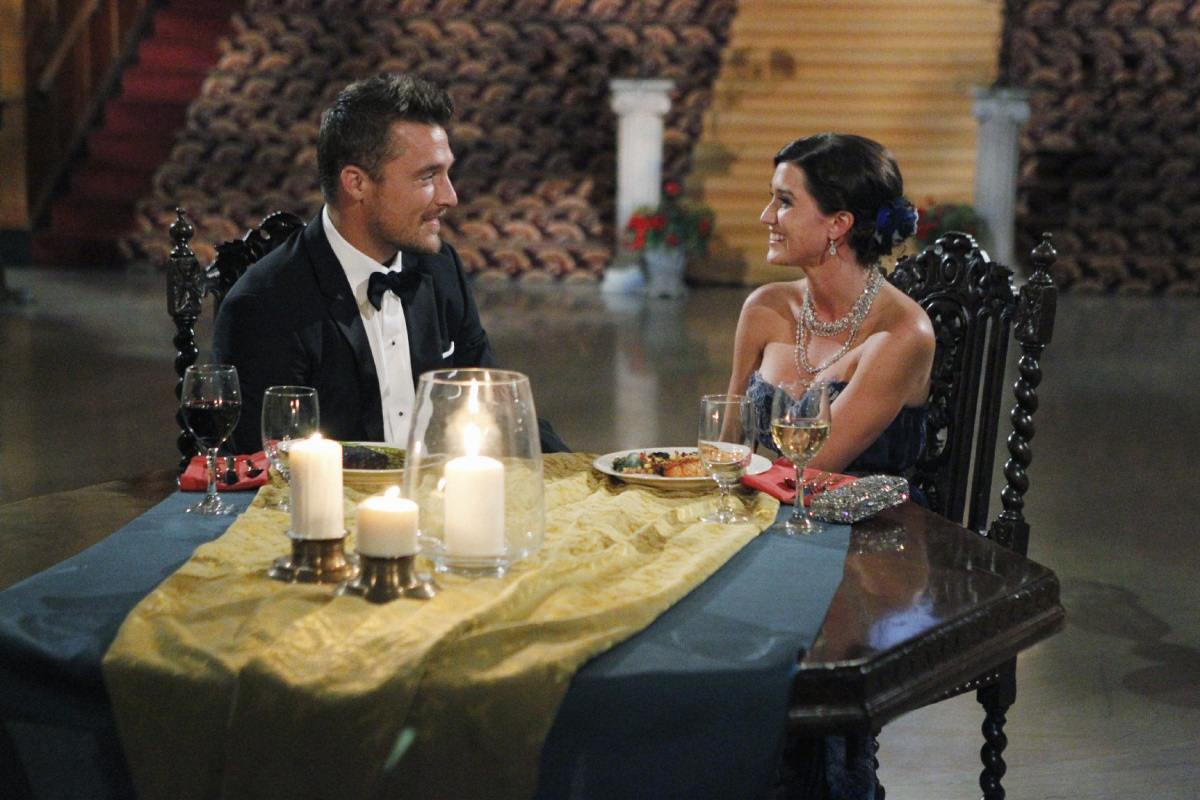 Yoshida: A "sweat act" is a great way to put it. And that kind of mania can become a crap shoot — sometimes desperation just looks desperate, and sometime it leads to the sublime. Somehow, in the midst of all this two-way, multilateral cynicism, I think this season of The Bachelor has landed in the latter category. (I was also an Ashley-S.-is-an-improv-comic truther from the beginning, if for no other reason than I would have to stop watching this show if it was exploiting an actually mentally ill person for a bit of lighthearted humor.)

But back to poor, poor Jade. The gender double standard in this franchise is a part of the product. If it's your first season as a viewer, it can be shocking, but the more episodes you allow to pass through your eyeholes, the more it becomes like oxygen. In Bachelorland, it's a red flag when a woman is upset that the man she's "dating" is making out with another woman 20 feet away, rather than patiently waiting for her own "time." In Bachelorland, it's ground for dismissal if a woman is revealed to have a boyfriend (or even an "it's complicated") back home, despite the fact that the Bachelor has 17 "girlfriends." The game asks for 19th century virtues of the women — patience, temperance, modesty, emotional availability — but the show rewards those who stray from those guidelines.

All of The Bachelor distilled into one moment

That's why I was so beside myself after last week's Jade debacle. So much of what The Bachelor is about culminated in that rose ceremony. After issuing the coveted Fantasy Suite roses to Whitney and Kaitlyn, Chris was left with two women: Jade, the aforementioned former Playboy model, and Becca, the virgin. I repeat: Chris had to choose between a (literal) virgin and (metaphorical) whore.

Everything about this is fascinating. Look at the way the two women are dressed, for example. Jade, after showing Chris what comes up when you Google her name, went for a full-length black dress with one long sleeve — dressing herself with the Bachelor equivalent of sackcloth to atone for her two-year-old moment of indiscretion. Becca, meanwhile — whom Chris does not know is a virgin yet, but whose family made him well aware that she has never had the urge to be "intimate" — is wearing a standard-issue flouncy minidress, still allowed to dress provocatively because she has not yet demonstrated her sexuality in a practical way. She can get away with it.

Sorry to go on so long. All this is to say that tonight a virgin could potentially wind up in the Fantasy Suite. And if that isn't what The Bachelor was put on this earth to accomplish, I don't know what is. 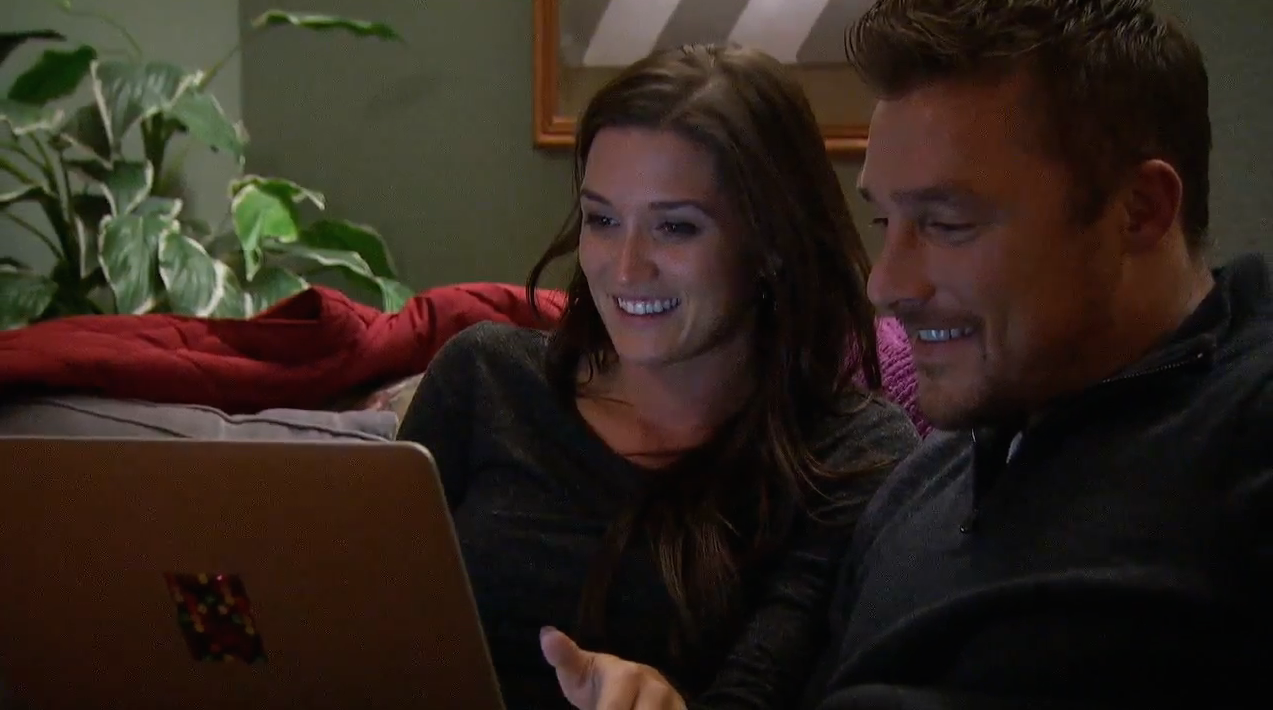 Plante: Before I get stuck in the reality television honeypot that is the Fantasy Suite, I have to circle back to Jade’s dress.

Like you said, it’s almost as if the producers were punishing this young woman for revealing her sexuality. The brooding music, the lingering camera, harsh black fabric and the concealing sleeve: it’s like she was preemptively mourning her own departure.

And then you notice a peek-a-boo cutout running from her waist to her shoulder, revealing some serious sideboob. The producers may have control of the edit, the sound cues, and the narrative, but Jade’s outfit selection was defiant. She pulled that shit off with a confidence rarely seen at rose ceremonies.

i wouldn't wish this scrutiny on anyone

I will miss her, though I fear if she came back as The Bachelorette, we’d have another Desiree: a winning personality as a contestant who can't quite stand up to the pressure of being the human prize. But honestly, I wouldn’t wish that objectification and scrutiny on anyone, let alone someone freshly shamed on national television for doing something as banal as nude modeling.

Okay, the Fantasy Suite. The "pimping problem" is well documented by far more eloquent writers than myself, but I will say it feels particularly egregious this year as producers nudge a virgin into a room with a man who assumes that the mere act of keeping her around this long will guarantee him sex. Doubly uncomfortable is the question of performance expectations. All contestants on The Bachelor and The Bachelorette are trying to portray a romantic ideal; diligently aware of their image even when bringing up emotional scars, tragic histories, or even personal gripes with the person they’re competing for. Imagine this need to please in the bedroom, and tell me you don’t need to chew on a pack of Tums.

the whole season has been a fantasy suite

Let’s be real. This entire season has been one long Fantasy Suite. Just eyeballing it, I’d wager Bachelor Chris has made out with more contestants and done so more shamelessly than any bachelor before him. From the first night, we’ve seen him make out on solo dates, on group dates, in the privacy of an empty restaurant, in the not-quite-privacy of a stranger’s wedding, and time and time again in front of the other women. What happened with Ashley I. in that tent? And what happened with Britt in that hotel room? Neither of them are around anymore. Here's where I remind you again that the comparatively demure Jade showed Bachelor Chris her Playboy pictorial and got the boot.

This is the truth: Bachelor Chris will choose Becca the virgin to be his bride. Because if there’s one consistent rule in a season where up is down and rose ceremonies start episodes instead of ending them, it’s this: never ever ever be sexually intimate with Chris Soules. I imagine the dude makes one hell of a "get the hell out my apartment" Pop-Tart breakfast.

Yoshida: I gotta say, I’m less interested in how this season ends than what the next season looks like. The franchise has flirted with all-out debauchery-filled chaos, first in the ill-fated Challenge-esque spinoff Bachelor Pad, and then in last summer's frankly brilliant Bachelor in Paradise. But it was always contingent on a set of unspoken commandments being abided by on its flagship series: no sex, at least when production’s watching (last season’s universally loathed Juan Pablo was an eager pioneer in that department.) Right Reasons whistleblowers and fakeness watchdogs would be offered protection and anonymity by The Bachelor, at least until air time. And most importantly, despite all the high-jinks, salacious innuendo, and schadenfreude, we need to come away from a season believing in love — or at least believing that The Bachelor believes in love.

After this season, I’m not sure The Bachelor believes in love anymore — it’s talked itself out of its own myth. Maybe it felt left out not being in on its own joke, but that feigned lack of self-awareness was what made it special. It was bound to lose it eventually, and it held out longer than most shows (see: The Jersey Shore) but still, I’m pretty surprised that all it took was Prince Farming to break the spell.