The Xiaomi Mi Note is the best phone you can't have

You can't get it in the US, but it's a sign of things to come

The smartphone business is notorious for eating companies alive. Even giants of industry have fallen: Sony is on the cusp of throwing in the towel on its phone division, Nokia is now out of the game entirely after having been the largest manufacturer of phones in the world as recently as 2011, and even smartphone-centric companies like HTC are struggling. Yet somehow, there are a few upstarts that are navigating these treacherous, Samsung- and Apple-infested waters — sometimes with enormous success.

Somewhere in this technological New Wave lies Xiaomi, a Chinese firm founded in 2010 that has become impossible to ignore. That’s driven partly by its unapologetic Apple mimicry: its marketing, product strategy, and design aesthetic all borrow elements from Cupertino’s playbook. It’s also driven partly by the high-profile hiring of former Android boss Hugo Barra from Google. But increasingly, it’s driven simply by the fact that Xiaomi is making genuinely interesting products. And at a valuation north of $40 billion, it’s apparently doing something right. 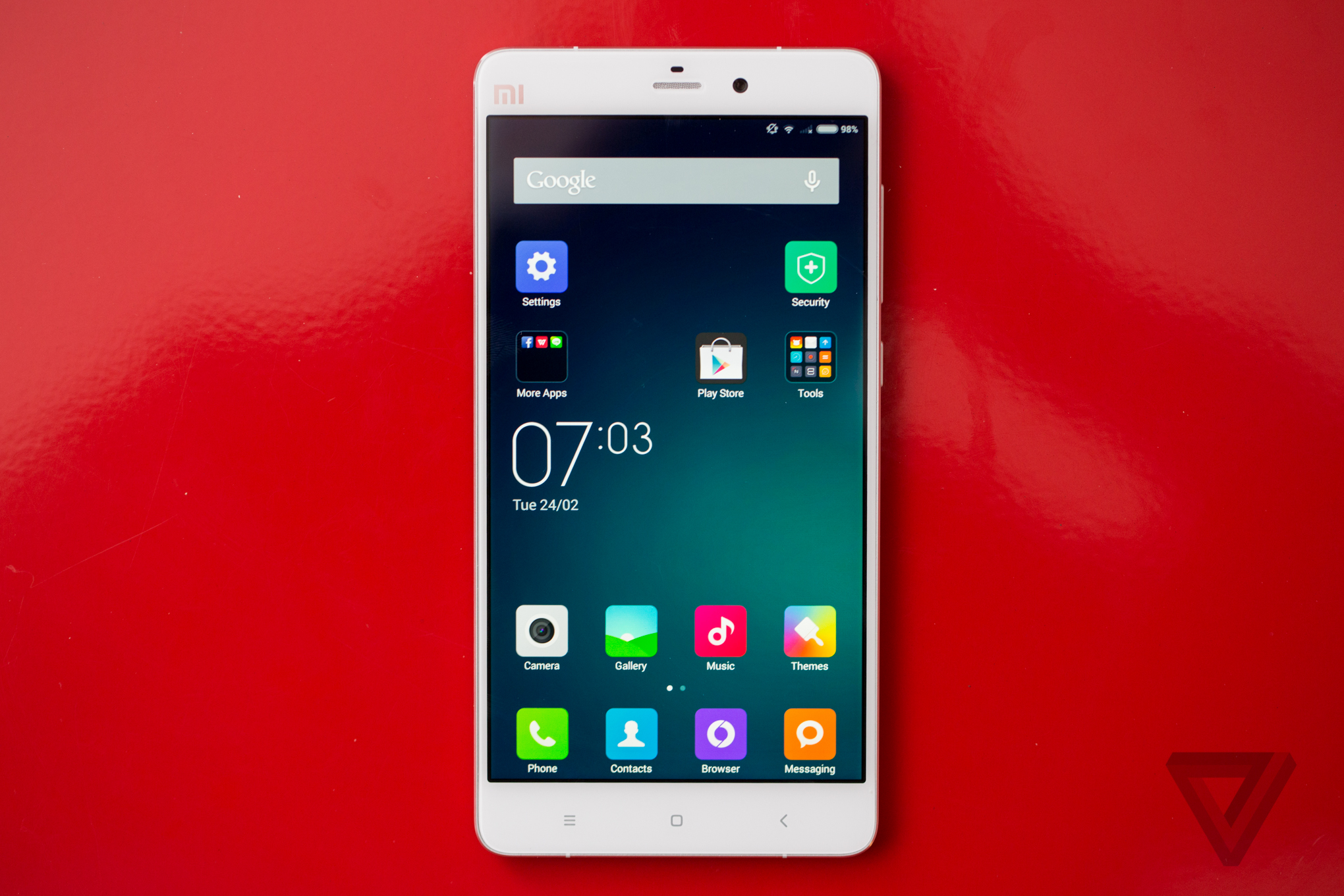 Xiaomi must think so too, because it has just embarked on a US media tour handing out the Mi Note, the company’s 2015 flagship, a phone that isn’t even intended for US sale. Specifically seeking out grizzled US tech journalists to check out your phone — journalists who grind through pitch-perfect iPhones, Galaxy Notes, and HTC Ones all year — shows a certain level of bravado.

The company will open an online store in the US later in 2015, but it’ll only sell accessories like headphones and fitness bands; in the lead-up to that, the Mi Note is intended to be a showcase of what this five-year-old company is capable of. And, yes, if the Mi Note is well received, perhaps it foretells an American phone release down the road. For now, we’re just getting a taste. (In fact, the model being distributed doesn’t support US LTE bands, so I wasn’t able to do a full-on review; there’s no battery test here, but I’ve been able to compile some thoughts on the hardware and software.)

I’d describe the design of the Mi Note as an amalgam of the iPhone 5 and the Galaxy Note 4, with a little bit of Xiaomi originality mixed in. That’s not a knock — it really works quite well, marrying large glossy surfaces on the front and rear with a thin metal rim along the edges. On the back, the left and right sides slope abruptly, which gives the phone something different from the bog-standard "thin, large rectangle" profile. The volume rocker on my unit is a little fidgety, and the metal edges are too sharp, but otherwise, there’s absolutely nothing about the Mi Note that screams "low-end," "knockoff," or any other derogatory term that you might hurl at a brand you’ve never heard of. It’s solidly built; there’s no creaking. Seams where glass meets metal are tight and even. I’m surprising myself by saying this, but if Samsung or LG had released this phone, I wouldn’t bat an eye — it’s that good. It looks and feels like a device from a company that’s been doing this for a long time. 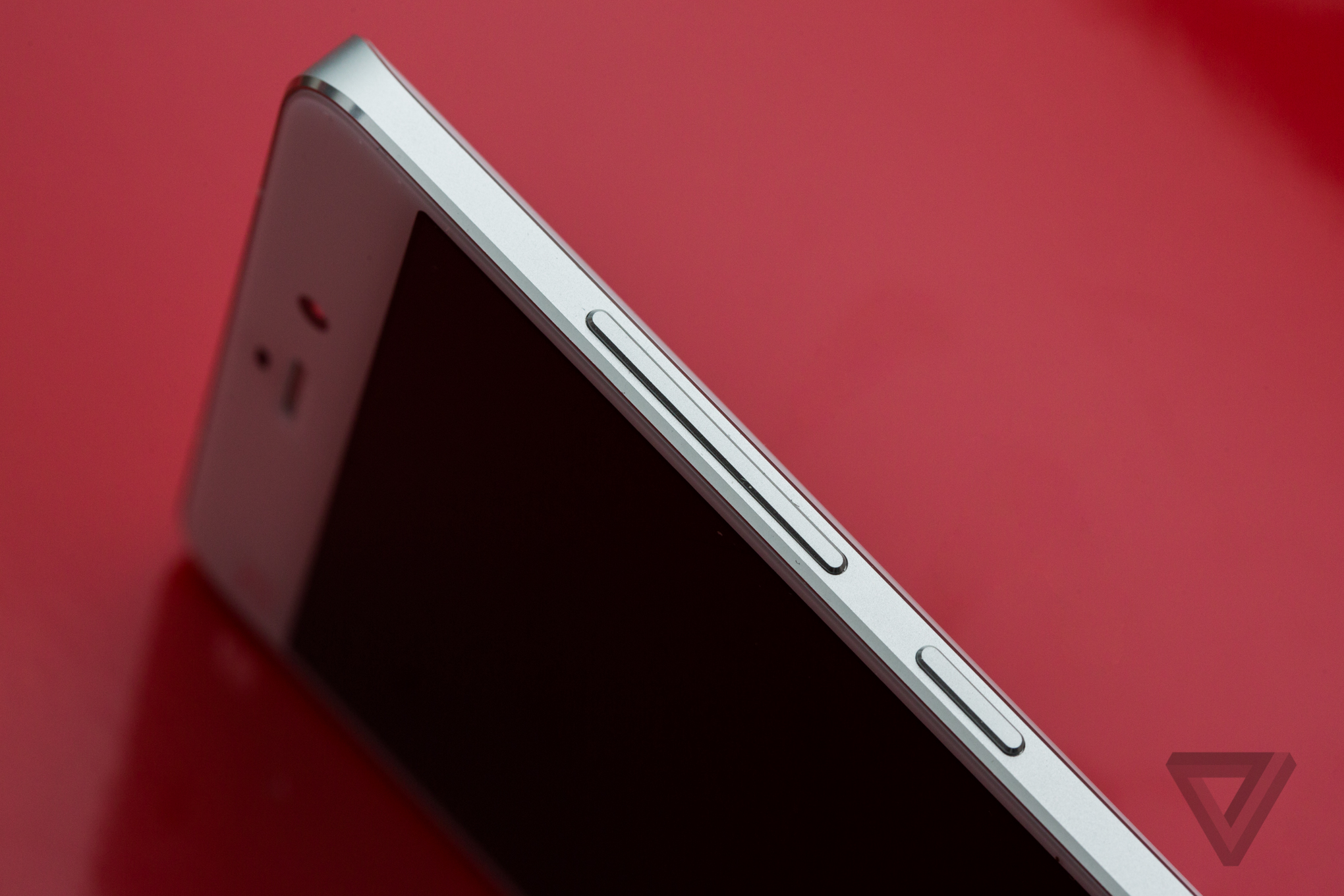 That’s not to say it’s perfect: the Mi Note’s design lacks the je ne sais quoi that bumps a design from good to great. When I think back to the phone designs that have truly dropped my jaw — the original RAZR, the original iPhone, perhaps the iPhone 4 — the Mi Note lacks that kind of unmistakable originality that moves the needle. Xiaomi borrowed the best of everything, rather than creating it: the laser-drilled speaker grille, the glass / metal sandwich, the corner-mounted rear camera with dual-tone flash. Certainly, two or three years ago the Mi Note would’ve dropped jaws, but today, it’s generic and sterile. It’s impressively sterile, granted, but it’s sterile nonetheless.

The same argument applies to the display, a 5.7-inch LCD with 1080p resolution that works out to 386 ppi. My middle-aged eyes are far from perfect, but the time has long since passed where I can tell the difference between the best and the fifth-best phone screen on the planet. To me, the Mi Note’s display looks just about as perfect as a display can: it’s laminated so that the screen looks flush with the glass, viewing angles are basically 180 degrees, and the colors are so vibrant that they have an almost OLED quality to them. And unless you have superhuman vision, there’s no way you’re going to be making out individual pixels. One area where the Mi Note falls short is brightness: with the slider maxed out, it’s still a little dim in bright daylight. 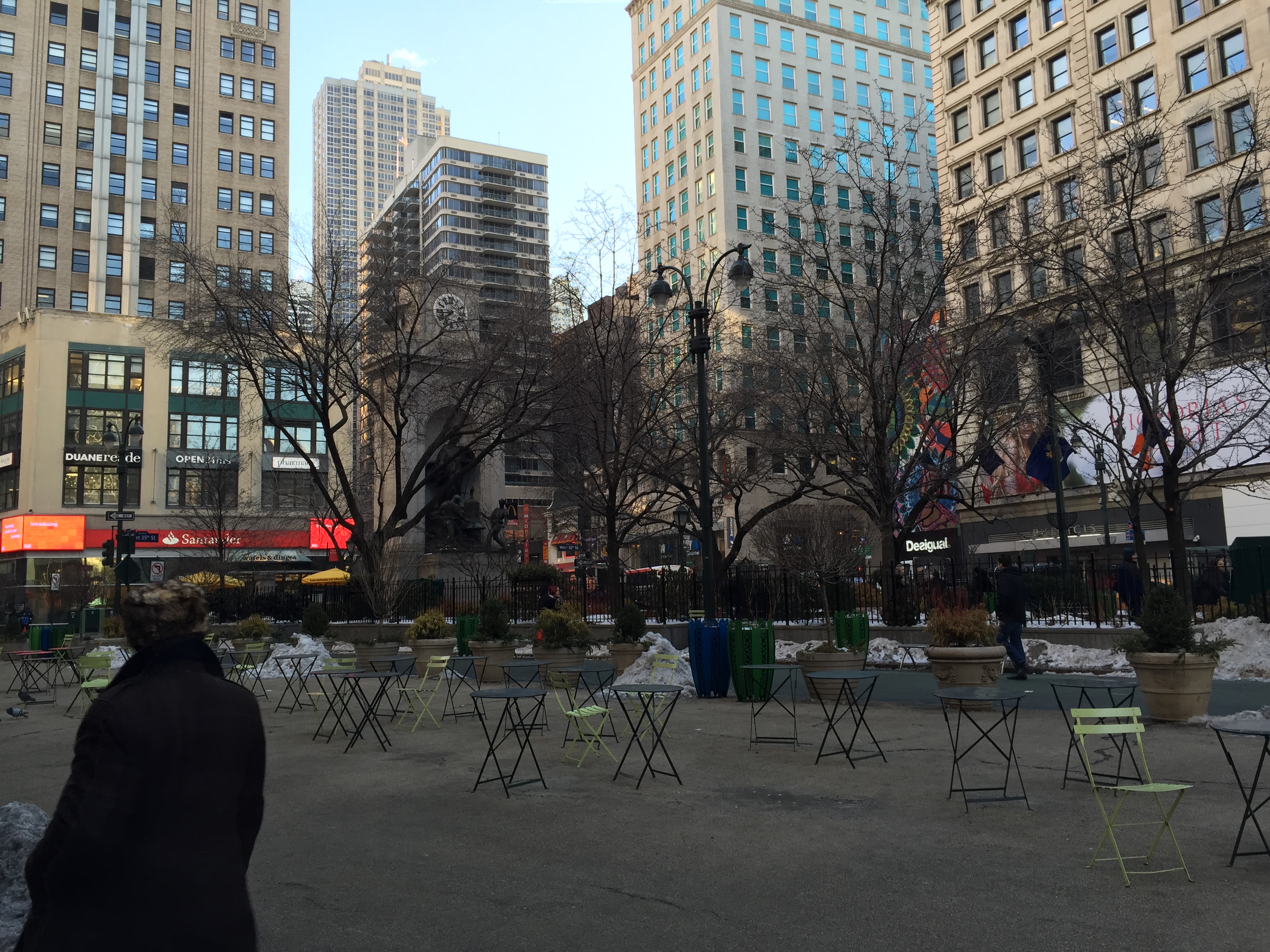 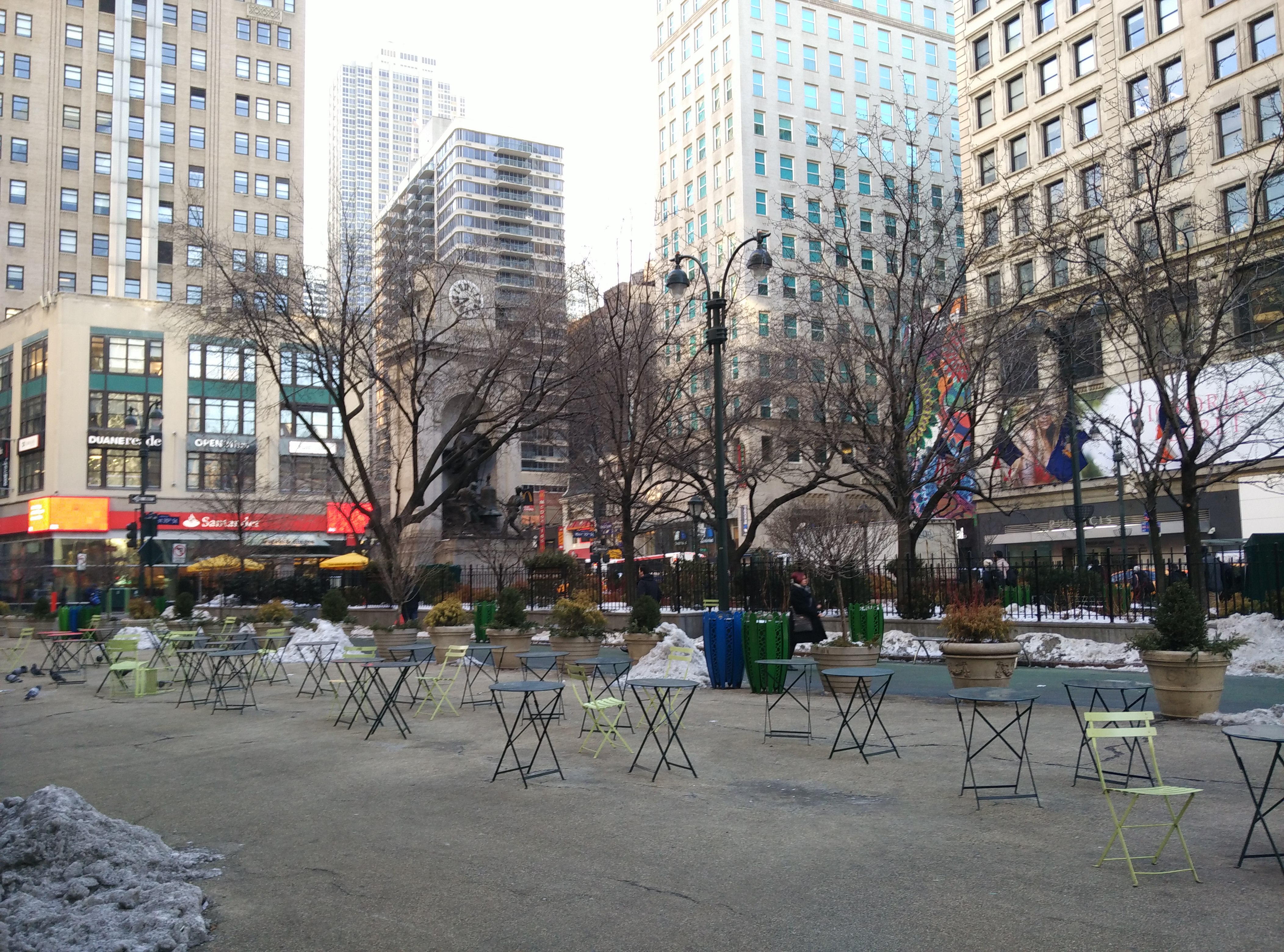 There are a couple tricks on the screen worth talking about, though: for one, the Mi Note has a glove mode that lets you fumble through the UI when you’re wearing gloves. (A number of modern phones have started incorporating this ultra-valuable feature, but not the iPhone.) There’s also a mode that will automatically lock the phone when you drop it in a pocket, saving yourself from the specter of a butt-dial, or worse yet, a butt-text. With my thick leather gloves, I found that I could get by — it probably only registered 60 or 70 percent of my taps, but when it’s 10 degrees out and you just need to check your email or dial someone, it’ll get the job done.

I wasn't impressed with the camera

I wasn’t as impressed with the camera. It’s not bad by Android standards, but pictures looked a bit blurrier (perhaps thanks in part to noise reduction) and more washed-out than those taken with an iPhone 6 Plus. The Mi Note features a Sony-sourced 13-megapixel sensor — I suspect it’s the same component used on many Android phones over the past couple product cycles — along with optical image stabilization, HDR, and a burst mode that absolutely rips when you hold down the shutter button.

The 2.5GHz Snapdragon 801 and 3GB of RAM seem to keep things moving along at a nice clip, though I was underwhelmed with MIUI’s built-in web browser — it stuttered and lagged through a variety of sites that I visit on a regular basis. Needless to say, you’re going to want to use Chrome. 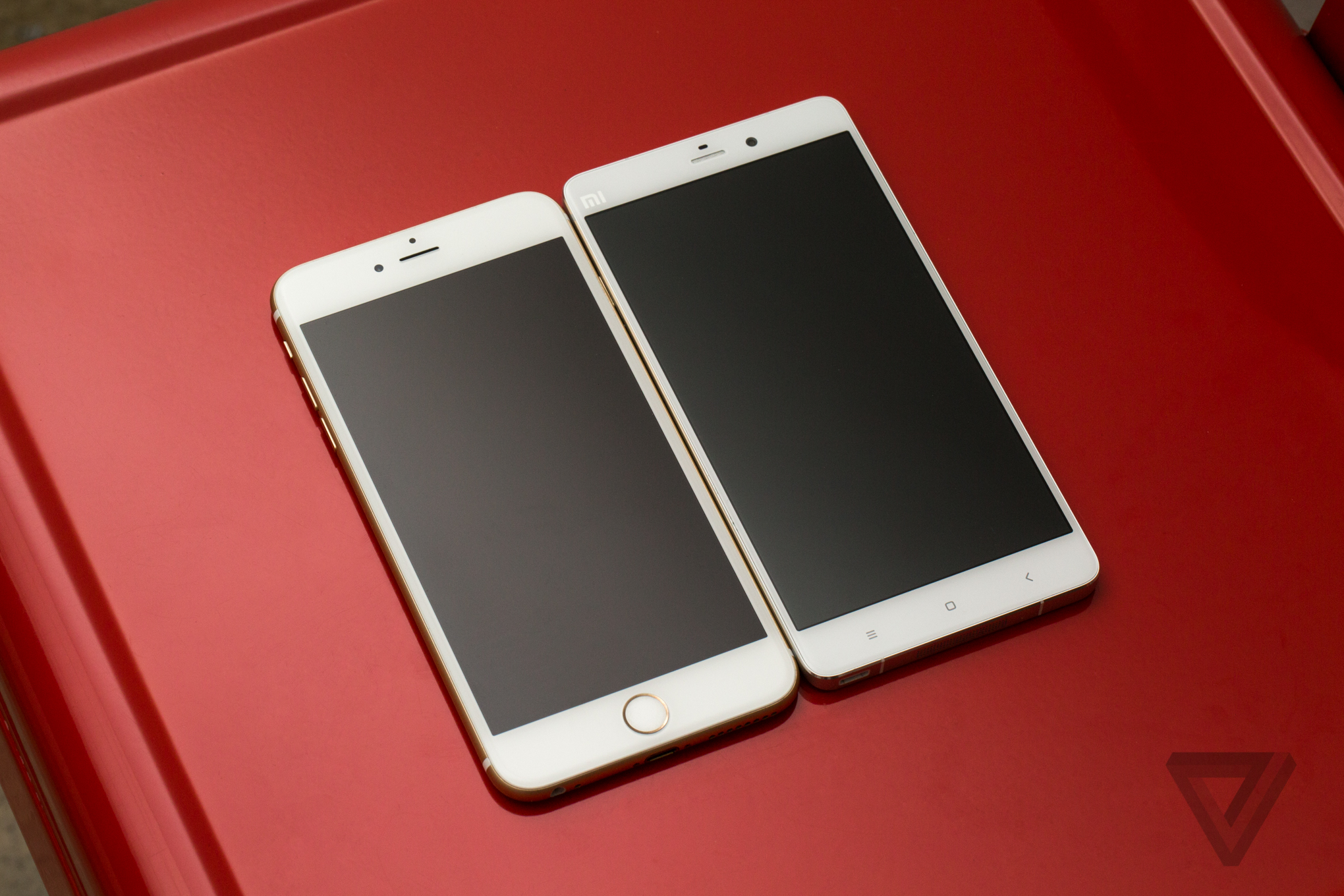 Speaking of Chrome, an important point: "Chinese Android phone" conjures visions of vast gray-market app stores, but Xiaomi is very much on the up-and-up, at least on exported models. Google services and apps are fully supported on Mi Notes sold outside of China, as is Google Play. That’s critical for a device maker that wants to be relevant on the global stage. Even Amazon has trouble getting around Google Play — just look at the monumental failure of the Fire Phone. (Admittedly, the lack of Google Play support is far from the Fire Phone’s only shortcoming.)

But this isn’t a pain-jane Android phone. It’s heavily altered with something called MIUI, and it’s kind of a form-fitting analog of the hardware: it’s clean, simple, befitting a flagship device, and it borrows many elements from other devices you’re probably familiar with. It’s heavily skinned, but at least in this case, that’s not a slam. (It's running KitKat, but Xiaomi says that Lollipop is on the way.) The solid colors and primarily two-dimensional interface elements keep pace with the mobile UI vogue, and the animations and transitions are smooth and tastefully short. 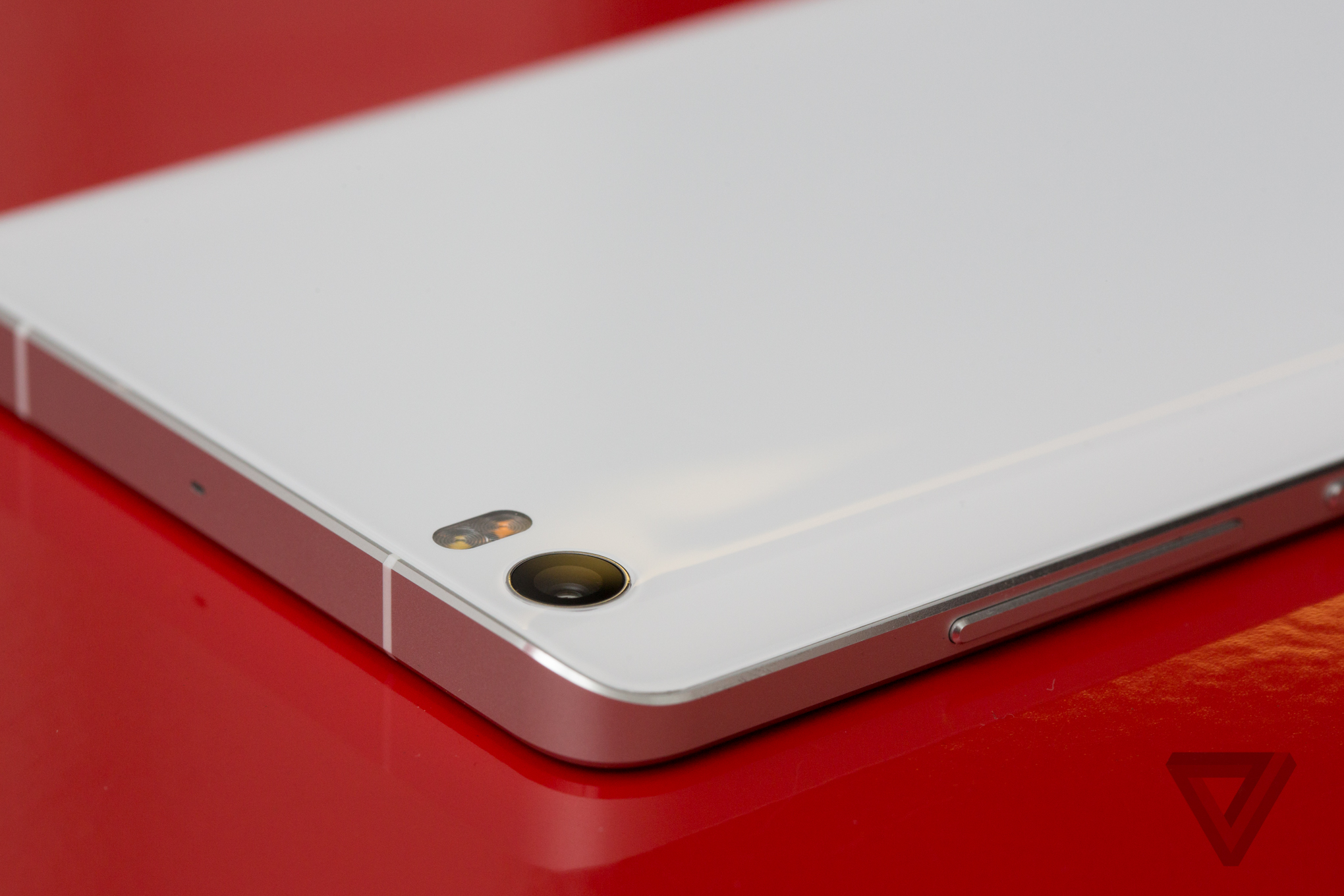 MIUI was immensely popular even before Xiaomi’s phones were, and I can see why — out of the box, it feels quite a bit simpler than stock Android, but it still offers tons of customizability. A theme store lets you skin everything from the lock screen to individual UI elements, and it seems to be populated with hundreds of choices. (Admittedly, I like the stock setup enough so that I wouldn’t change it, but choice is good.) Xiaomi has warmed over the notification curtain, typefaces, and menus as well, giving everything a softer, gentler look. Strangely, the default keyboard is Google’s, which looks weirdly out of place on a phone where virtually every other corner of the UI has been given a fresh coat of paint.

And, yes, let’s not overlook the fact that there are some very blatant homages to Apple here: the folder icon is basically identical to the one found in iOS. Numbered red badges get attached to apps with notifications. Dots at the bottom of the home screen indicate your current page number. But if the world needs "an Apple of Android" — and this phone is convincing me that maybe it does — then Xiaomi is certainly in a good place to fill the role.

If the world needs "an Apple of Android," then Xiaomi is in a good place to fill the role

I like the Mi Note; I like it a lot, actually, a lot more than I thought I would. Still, I think Xiaomi’s taking a smart, measured approach by showing it in the US without selling it here, because let’s be honest — it’d be murdered in the marketplace today. Carriers would be reticent to carry a brand that’s unknown to Americans as anything other than an also-ran, but the Mi Note isn’t priced that way: a 16GB version goes for 2,299 RMB in China, which works out to something like $367. As good as this phone is, I’d be hard pressed to recommend it over an unlocked Moto X at a similar price.

But now that we’ve seen it, we know what Xiaomi is capable of. We’ve heard of the company, we’re following its progress. That sets the stage for the future — sometime when the market is perhaps more favorable to launch an upstart smartphone that people will actually want to buy.

In the meantime, China has access to one of the most interesting tech companies on the planet right now. I’m a little jealous.