“If we could actually be in your bedroom and help you with this, we would,” says Dr. Chris Donaghue. The tattooed, slick-haired sex therapist stares past the camera with a knowing smirk about what comes next.

Donaghue continues: “But we can’t. That’s where the Sex Box helps us. Because after sex, the oxytocin’s at its highest, so you’re going to feel the most open and vulnerable and honest. And that’s when we can best really, really help you guys… So, Elle and Brandon: are you ready to go into the Sex Box?”

Elle and Brandon are ready. They are the first victims of Sex Box, a reality television program adapted from the UK original on Channel 4, premiering tomorrow night on WeTV. Over the course of an hour, two therapists and a pastor provide couples relationship advice before and after the partners have sex in a box on a stage before a live studio audience.

'Are you ready to go into the sex box?'

The hosts are the sort of health experts-cum-wannabe celebrities that have been staking their territory across daytime television for the past decade-plus. Dr. Donaghue is joined by Beverly Hills therapist Dr. Fran Walfish and pastor and counselor, Dr. Yvonne Capehart. The trio share the confidence of a Tarot card reader, the vocal projection of a musical theater major, and the glamour of a West Hollywood central casting director. 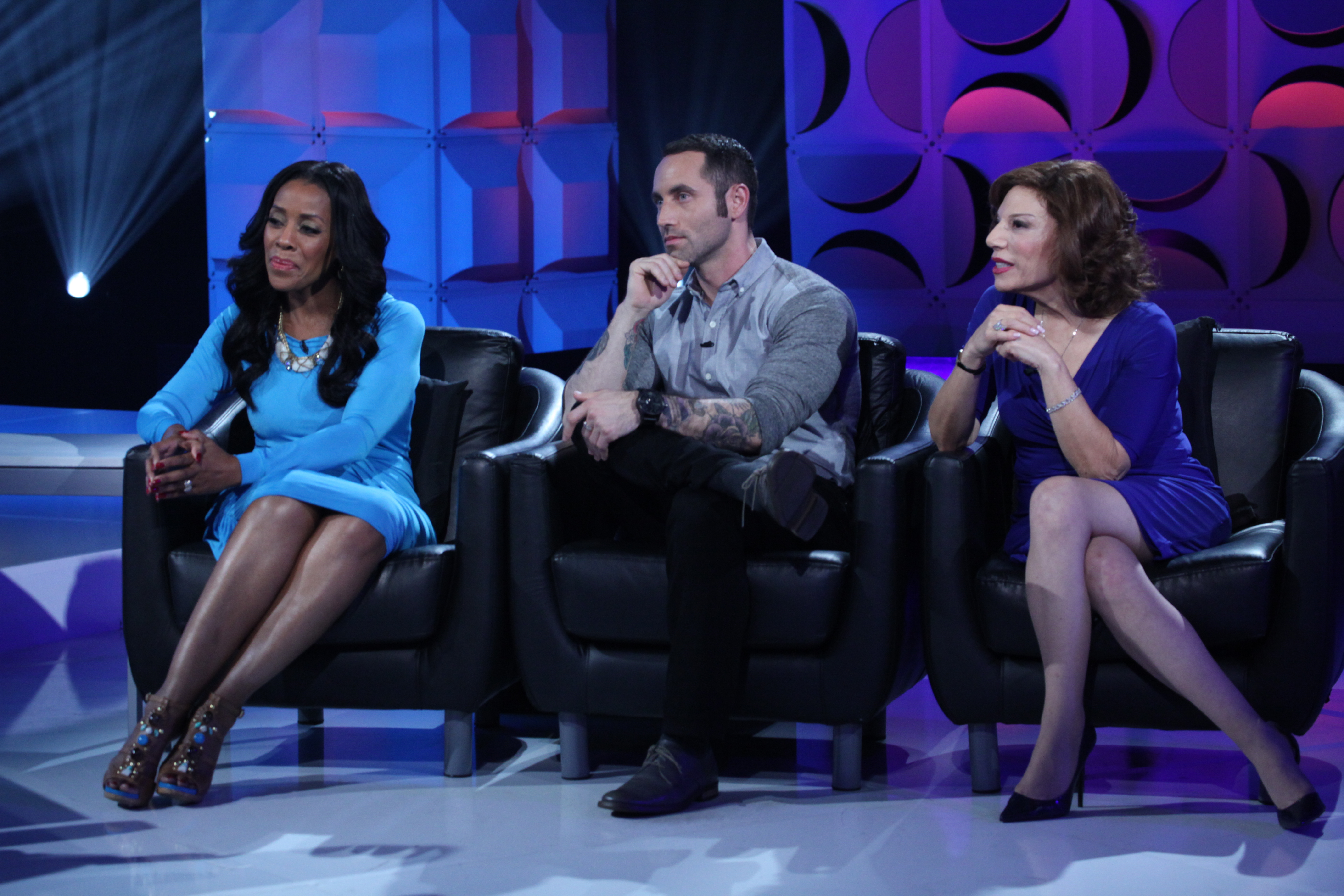 The couples (read: specimens) range from newlyweds to established parents. All have that "people you’d expect to see on Jerry Springer" swagger, but only Ellen and Brandon have the particularly bad fortune of going first, not grasping what exactly they’ve agreed to.

The two musicians — together for a year, married for six months — have a relatively straightforward problem. In Elle’s words: "He has an orgasm, and I don’t." Says Brandon, "I guess I kind of knew it, but it’s never been said out loud."

Imagine going to sex therapy with three counselors, and all of them taking your partner's side. And it’s on national television. You might have empathy for Brandon, who approaches the show with reasonable guard and humor, given the apartment-sized Sex Box looming behind him, and is reprimanded and humiliated for not taking the charade seriously. 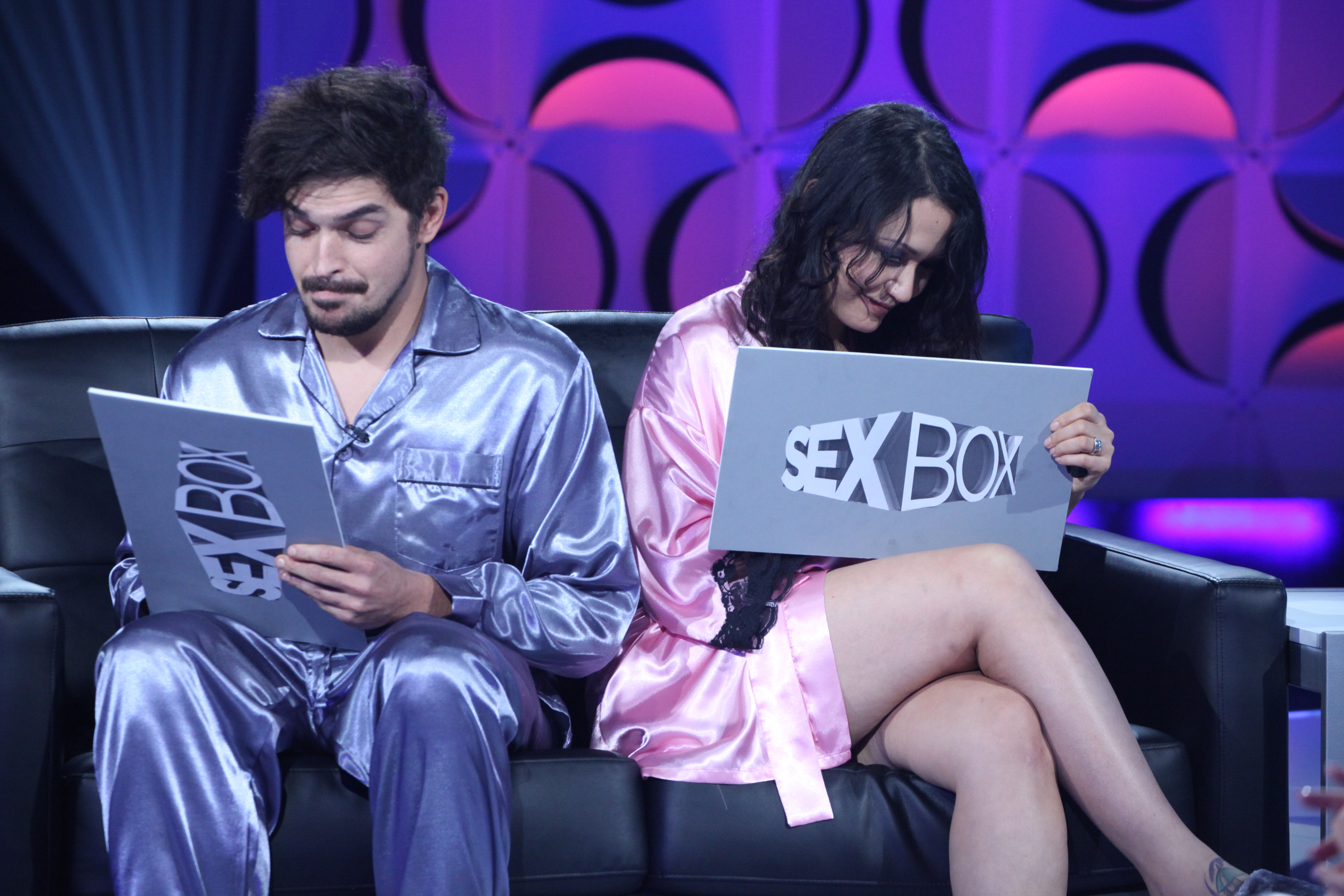 Brandon is instructed with the blunt and obvious advice to fulfill Elle’s needs, and like that, they’re off to the Box, and we’re left to imagine something happening in the Box. Meanwhile, the three hosts gossip about the health of a relationship they know nothing about, while a clock measures the amount of time the couple has been having sex, a metric that exists presumably for the sole purpose of cruel judgement. Brandon and Elle hit 17 minutes, a middling amount of time that none of the hosts really know what to do with.

The duo emerge in silk robes and flushed faces, and the hosts demand they both rate Brandon’s performance. Brandon gives himself an 8.8; Elle awards a 7.9. The therapists clap and Donaghue shouts, "That’s pretty good!"

Brandon responds with a befuddled, "Is it?"

We learn Elle orgasmed first, and Brandon exhales with relief. The five strangers share a few more pleasantries, Brandon agrees to be good at sex, and the couple departs.

The remainder of the show is a play on this scenario over and over again, intercut with a segment that rips off of HBO’s Real Sex. Woman-on-the-street Danielle Stewart asks normal folks to share juicy morsels about how they get freaky in the bedroom. These segments are frequently charming and refreshingly sex-positive — just like the show it shamelessly cribs. 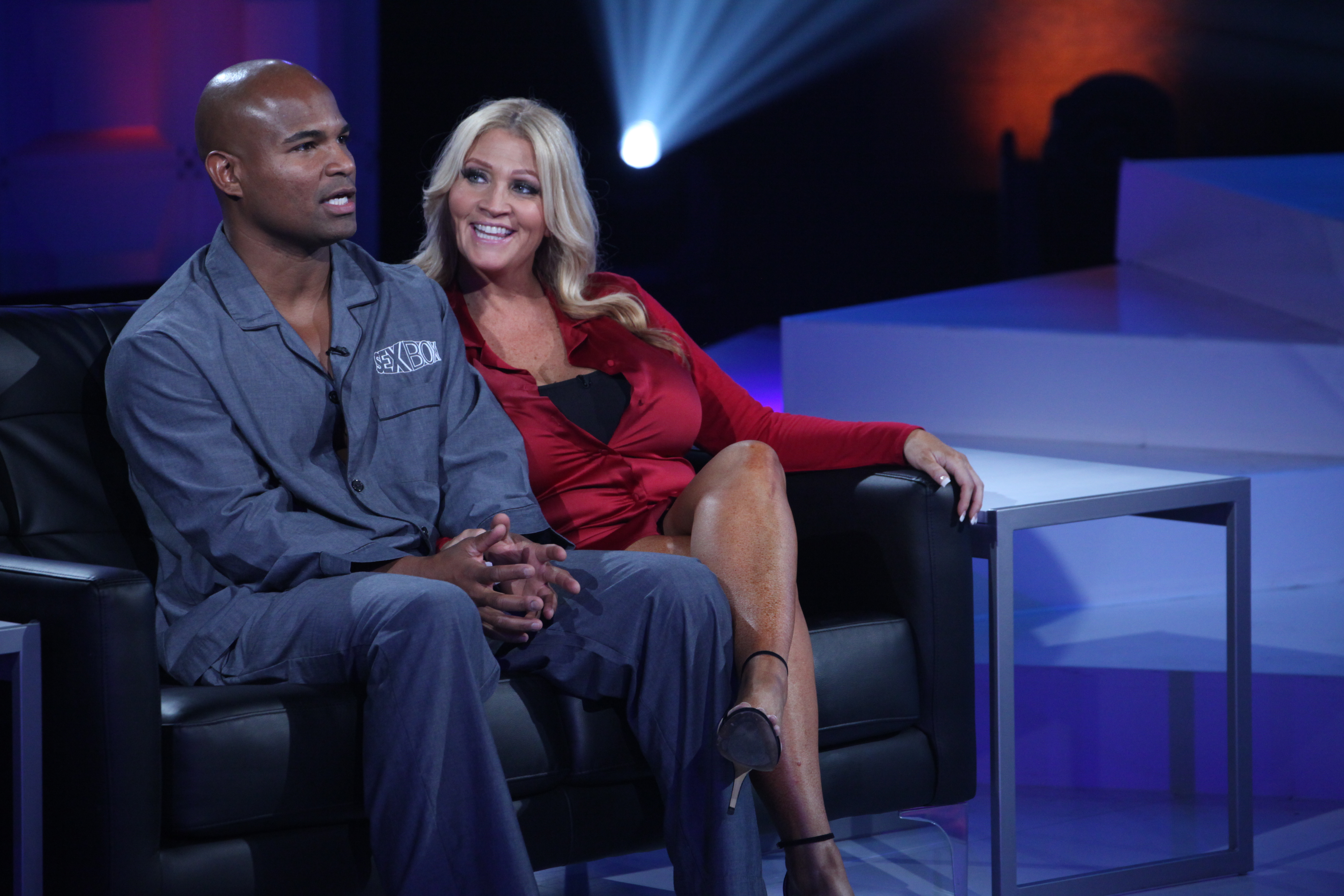 But the majority of Sex Box is structured around three people giving impossibly confident snap judgements to couples who are supposedly trying to solve some of their most complicated and intimate problems. The second couple, Rebecca and Dyson — together for 17 years, married for 10 — have "had threesomes, foursomes, moresomes," says Rebecca. They’ve also had kids.

Now Dyson wants to invite another woman into their relationship, not just as a sexual partner. Dyson wants a "thrupple." And Donaghue offers the go-to solution: "We’d love to go home with you guys," he says. "But we can’t do that. That’s why we have the Sex Box."

Roughly 25 minutes later, Rebecca tells us Dyson "actually spent some time in the southernly region." Turns out that while Dyson wants another woman, he doesn’t spend much time sexually fulfilling the one he’s already with. ""I’ll be the first to admit that I’m lazy," says Dyson. "I take my clothes off and lay there like a starfish."

How can you not hear these complaints and think, Yes, this couple has a real emotional and sexual roadblock that would benefit from therapy? And how can you not cringe when all five people celebrate Dyson’s brave decision to put his thrupple plan on hold for a year? 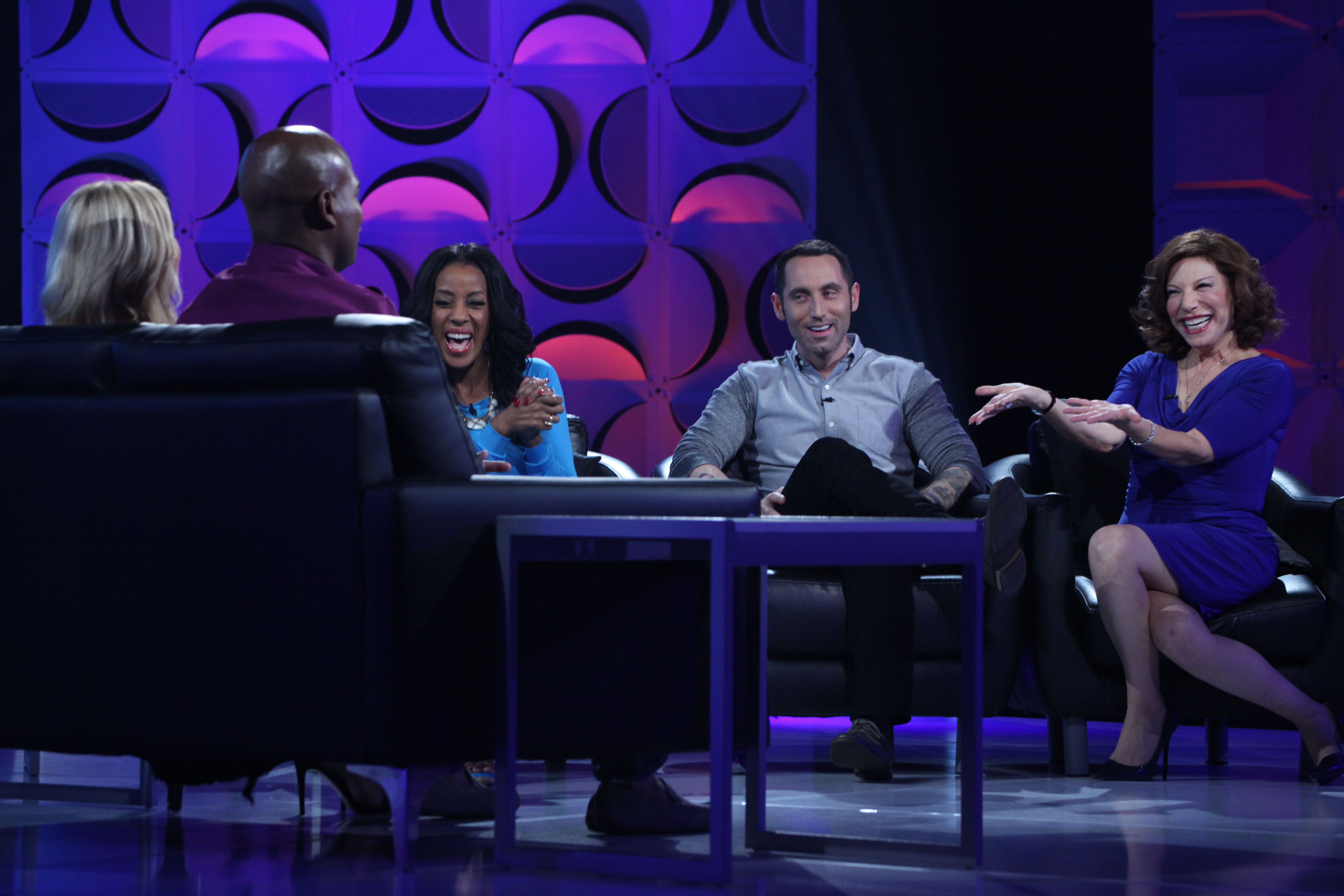 I love plenty of morally dubious reality television, because despite its flaws, shows like The Bachelor and Survivor and Keeping Up with the Kardashians feel paradoxically human to me. There’s a sort of assumed celebrity of the stars of those shows; we know that they’re willing participants on a game show or a very strange, very long documentary. But shows like Sex Box, that claim to provide some sort of guidance to normal humans, trigger an existential depression.

There's a good reality television show idea somewhere inside the sticky confines of Sex Box, a show where a panel of helpful therapists provide guidance to couples about universal problems. On that show the guests would serve as audience surrogates, and Sex Box itself would be a metaphorical safe space for viewers to think, feel, and learn about sex in new, healthy ways. Sincerely, television needs that show.

Sex Box, obviously, isn't what television needs. If at their best, The Bachelor is about finding love and Survivor is about overcoming adversity, then Sex Box is about talking trash on people you just met while they fuck in a box. With any luck, I will forget I ever watched it.

But two questions will stay with me: Does anyone actually get down in the Sex Box? And does it even matter? As with any mystery box, the only way to know is to step into the Sex Box yourself.