Truth is subjective. One plus one equals three, the sky is green and the grass is blue, there are five lights.

The dress is white and gold.

The dress is black and blue.

The dress in question was posted on Tumblr earlier today by user swiked, who noted that her friends were unable to agree from a picture whether the frilly number was white and gold, or black and blue. They were, in swiked's words, "freaking the fuck out." Discussion quickly leapt to Twitter. Some users quickly made up their minds, their reality locked in place by their first viewing.

Others saw the dress change in front of their eyes, from blue with black bands, to white with bands of gold. And some users, angry and confused by a world in which colors could change at will, invented elaborate explanations to cushion their mental falls.

I am glad everybody mutually agreed to troll each other about the color of a dress. You are all wonderful liars. Now whatever I don't even.

The internet needed an explanation for The Dress. Buzzfeed collected the evidence, but it was inconclusive. Computerized color correction could prove that the garment was either bright white with gleaming gold bands, or dark blue with bands as black as midnight. It turned, instead, to the source of the nightmare — the dress itself. It found what appeared to be the same item on sale at Roman clothing, a body-hugging creation in a very distinctive dark blue. But still, the internet wasn't sated. Other dresses could be dark blue, sure, but why was this cursed dress, born to be blue, appearing as white? So we did what we do when we need an answer to one of life's mysteries — we consulted celebrities. But even our brightest minds were defeated by The Dress.

I don't understand this odd dress debate and I feel like it's a trick somehow. I'm confused and scared. PS it's OBVIOUSLY BLUE AND BLACK

What color is that dress? I see white & gold. Kanye sees black & blue, who is color blind?

If that's not White and Gold the universe is falling apart. Seriously what is happening????

So we turned instead to our other gods: brands. Adobe tried to explain the situation; Sesame Street just mocked us.

Me think cookie is chocolate chip but @Elmo think it oatmeal raisin. We no can decide! Help! pic.twitter.com/KLKsqsl5ap

The Dress had transcended understanding on a meteoric rise to memehood, from garment to international rallying cry in a few short hours, on a day when escaped llamas and the FCC had already given the internet something to be cheerful about.

do u ever feel like no one is really looking at u for who u really are pic.twitter.com/UnoIaiq0Ie

Science explains that our eyes have more difficulty seeing blue light than warmer colors, and that low light situations can make us see things in different shades. Xkcd weighed in on the science side, with the comic below illustrating how the "different" colors people are seeing could be the result of a white-balance optical illusion. 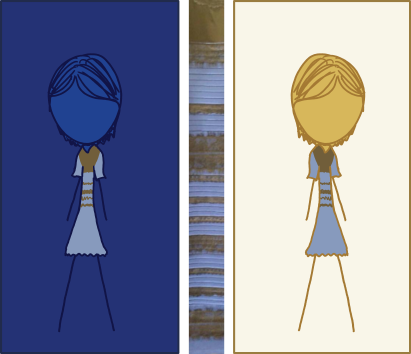 Essentially, this is when our eyes are tricked by the context of what we're looking at — a similar thing is happening in the famous 'checker shadow illusion.' And if you don't believe the colors on the two dresses above are the same, try opening up the comic in an image editor of your choice and use the color picker. They. Are. Identical.

However, what physics doesn't explain is why on Earth the internet has reacted in such an overwhelming way to the color of a dress. Perhaps it's to do with truth itself — if our eyes tell us something is blue when more than half of humanity sees it as white, how can we trust our understanding of existence? Or maybe, just maybe, The Dress is super-haunted or something.