Throwing some tampons at sexism in the tech industry

There’s no known antidote to the toxicity of Gamergate, but one good way to recuperate is by directing your attention to the teenage creators behind a game called Tampon Run. Sophie Houser, 17, and Andrea Gonzales, 16, met during a summer program run by the non-profit Girls Who Code. For their final project, the New York City high school students built a game to try to de-stigmatize menstruation by letting players shoot tampons (not guns) at their enemies. The game brought so much attention to its precocious creators (and the taboo subject) that the pair is launching a new-and-improved mobile version in the Apple App Store today.
Not convinced getting your period is all that taboo? Try walking through your office carrying a tampon in plain sight. Stop and chat with a male colleague on your way to the restroom, while you're at it. Then imagine the middle school version of that exchange. "Something most women get for a majority of their lives is embarrassing, crude and shameful," Houser explained in a TEDx talk about gender and tech from December.

Their equality agenda also includes a game about catcalls, built at a Stanford hackathon

But the duo’s equality agenda doesn’t end there. After launching Tampon Run, Houser and Gonzales were named finalists at a Stanford hackathon for a game called Catcall Run. In that rapidly strung-together version, the player flings "tools of empowerment" like pencils, computers, and notebooks at oncoming catcallers, who then switch over into "graduation garb because they had been educated," Houser told The Verge.
In fact, a shared interest in women’s issues is what brought the pair together. When it came time to find a partner for the final project at Girls Who Code, "I was in the social activist corner, and Andy was in the art corner," said Houser. Gonzales pitched a project about "the hyper-sexualization of women in gaming," and Houser "made a beeline" for Gonzales because she loved the idea of using code as a creative tool for activism. 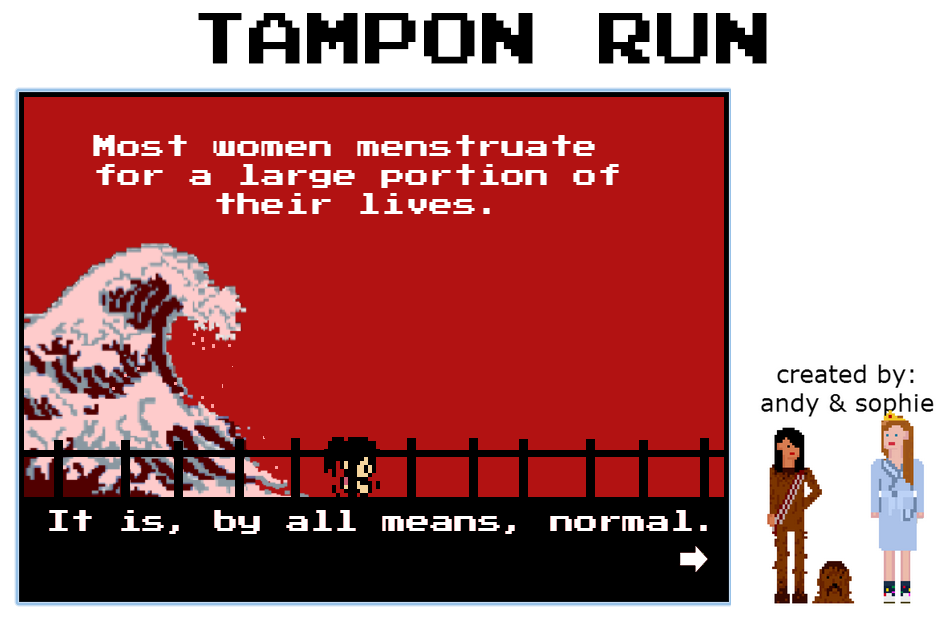 They eventually settled on Tampon Run, an old school 8-bit online game. In it, the girl character throws tampons to destroy her enemies, who will confiscate the tampons if she lets them pass by. The notion of weaponized tampons is a reference to a 2013 incident where Texas state troopers confiscated tampons (as potential projectiles), but not guns, from visitors who were trying to get inside the Texas State Capitol to observe a controversial vote on abortion restrictions.

The online version of Tampon Run is simple, literal, and light-hearted, but that's what they were able to do with limited training and time. The iOS version of Tampon Run gets more challenging over time and includes a flying enemy and leaderboard.
In the TEDx talk from last month, Houser and Gonzales said their larger goal was to encourage more girls to experiment with coding. "I don’t think a guy would have made Tampon Run, and I don’t think Andy or I would have made it if we were in a co-ed computer camp," Houser told the crowd, lighting up when she described how great it felt to get the character to jump after two frustrating days of coding. Continually overcoming those difficulties is what makes you feel successful, she explained.
The iOS version of the game, which launches today, was built with help from Pivotal Labs, which volunteered its expertise pro bono for seven weeks. Pivotal, a development consultancy, typically works on projects for clients like Twitter, Groupon, and Best Buy.

Houser readily admits that she and Gonzales have caught some lucky breaks. For example, they were introduced to Pivotal through investor and entrepreneur Nihal Mehta, the husband of Girls Who Code founder and CEO Reshma Saujani. Mehta is a member of the non-profit's "Brain Trust." Houser thought they were going to Pivotal for a "scoping session." The girls answered questions about what they wanted to build and how long that would take. "We couldn’t be at Pivotal all day. High school," Houser said, with what sounded like a shrug. Pivotal decided to offer up a dedicated team for seven weeks. In a statement, Catherine McGarvey, NYC Office Director at Pivotal Labs said: "Pivotal values diversity and enjoyed supporting an initiative that fosters inclusiveness in the tech industry."
All the good-intentioned attention hasn't yet translated into traffic for the game, which has had 232,000 unique visitors since it launched last September. Houser said the numbers were "surprisingly low based on the media coverage." (They've been featured everywhere from Fast Company to Teen Vogue.) Perhaps "people were sharing the news articles and maybe not clicking and playing the game." If the app doesn’t get traction, there's a chance a book will fare better. Houser and Gonzales are talking to agents about writing something "that would encourage girls to code."

Houser, who only learned to code this summer, is committed to majoring in Computer Science. She and Gonzales pay close attention to the gender gap in the tech industry and have been carefully observing women harassed by Gamegate. "It's definitely scary, and we were very lucky," she said, that Tampon Run has only received "some hate mail from people who were anti-gun control because we had a little message about violence in video games."
Watching Gamergate unfold "was horrible to see and to hear about," said Houser. "But it strangely made me want to be here more. I want to stand here like a woman. I want to hold my ground."