Previous generations of parents viewed video games as time-wasters, but the medium has made recent inroads thanks largely to tablets and educational games like Metamorphabet and Minecraft. Video games have also inspired a generation to spend more time than ever on screens. A new app called Biba, from Vancouver incubator Zeroes 2 Heroes, hopes to find a healthy compromise that uses mobile gaming to motivate outdoor play.

“We’re basically trying to use mobile devices to get kids mobile again,” says Biba product designer Dr. Nis Bojin. The app looks like a parenting fantasy — an easy-to-use tool for getting children active and healthy. But can it keep children's' fickle interest?

A child uses Biba indirectly. A parent or guardian opens the app, choose from its themed mini-game collections, and then serves as both an instructor and smart device-operating surrogate. For example, a game might turn the child into an imaginary car. The app would send the child running across the playground, returning to get refueled by the parent tilting the smart device over the child’s head. Or maybe the child-car need repairs, so the parent taps the device against her elbows and knees.

A parent controls the biba app

All the while, the app collects data, like the child’s time, so that the software can incentivize more play with a leader board, not unlike how a traditional racing video game does. Biba also delivers immediate and long-term awards and rewards; one session might give the child a badge and a small piece of a rocket ship that can be constructed over many visits to the playground.

Biba’s team likes to compare the game to Wario Ware, a collection of wacky mini-games, and that makes sense. The short interactions with the screen are Wario Ware-esque and do a good job of keeping the child’s time at the screen to a minimum. It’s easy to see a child eventually giving up on the digital charade all together, as the device primes their imagination enough to launch them into a fantasy world free of support. 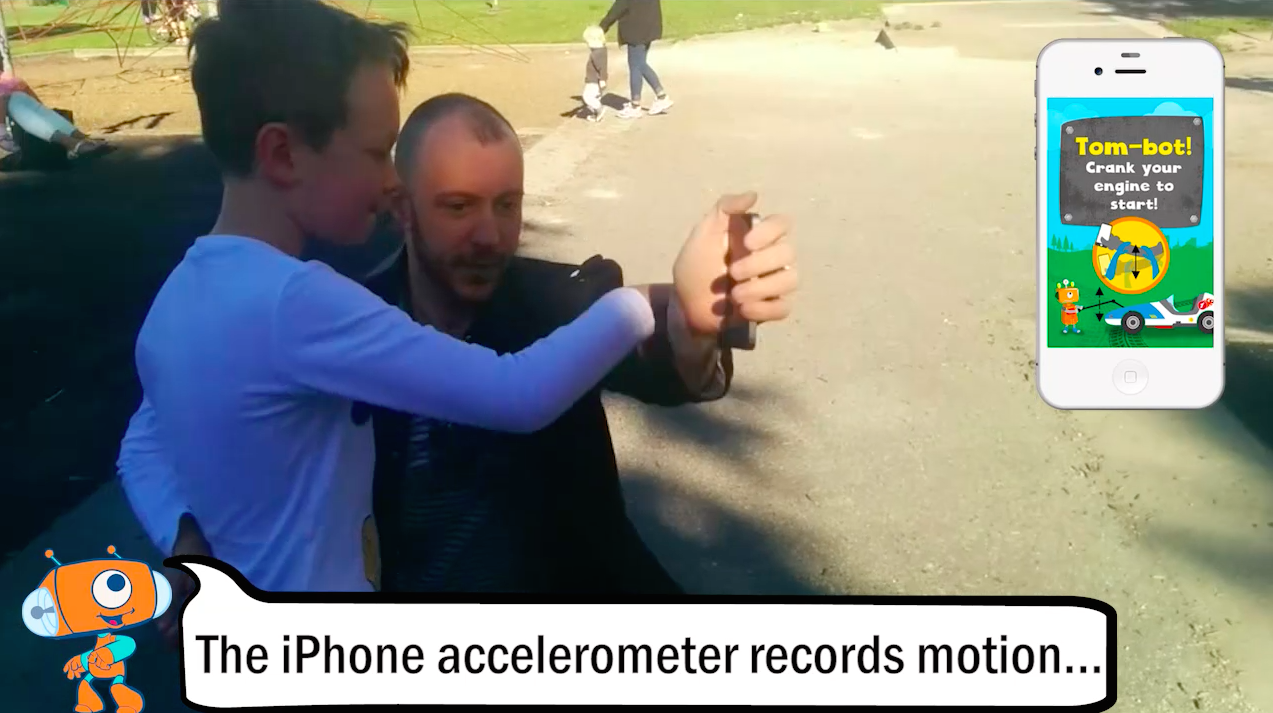 In that way, the game most resembles the classic pen-and-paper game Dungeons & Dragons, with the parent serving as Dungeon Master. As Bojin explains, kids are actualizing the gameplay by becoming the character in the physical world. They’re role-playing.

Biba’s app serves as instructions to kindle the imagination of both parent and child. It’s a starting point, but hardly a restrictive interface that must be obeyed by either party. It’s a refreshing about-face from apps designed to retain users' attention at regular intervals of every day.

Lynne Vandeveer, the chief marketing officer at PlayPower, Biba's hardware partner, notes research by University of Michigan claiming children spend considerably less time outdoors as they did 20 years ago and almost seven hours a day on average in front of screens. In Biba, there is a sort of expectance of this shift in regards to what holds a young person's attention, an "if you can’t beat them, join them" mentality. And so the screen is embraced as an ally and a motivator

Of course, kids aren’t the only ones addicted to screens. Even though playgrounds are safer than they’ve ever been, and children go outside less, playground accidents have gone up in recent years. Bojin attributes these incidents to more parents watching their smartphone instead of their child. Biba’s designers, Bojin says, are looking into ways to suppress notifications while parents use the app so their attention remains on the kid rather than their inbox. They’re also considering using notifications outside the game to remind parents to visit the playground. 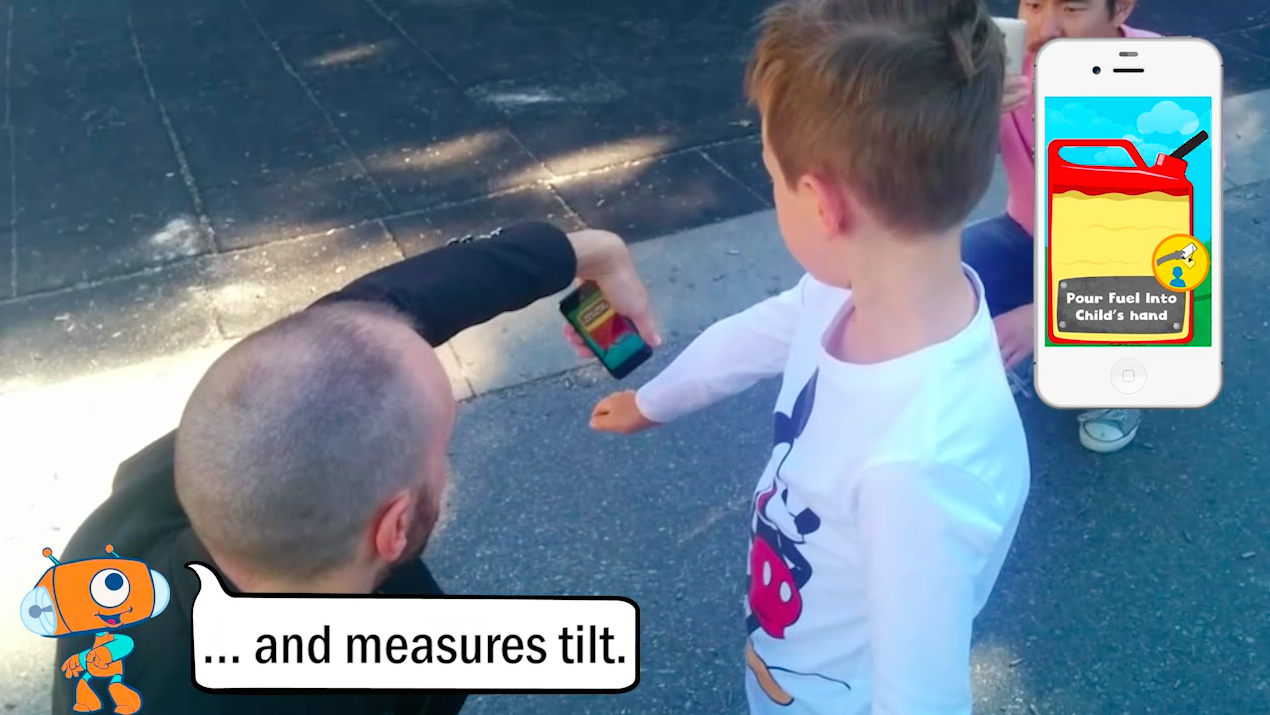 But how do you keep kids attention with a single app when a $60 game can wear out their welcome in weeks? Even if children enjoy the positive in-game feedback, they can get as much from practically any substantial video game. In the games industry, novelty has become king, with large developers outlining audience retention plans months, if not years, before a game’s release. Biba plans to expand the game with additional content, but they also see the playgrounds themselves as uniquely novel. The same Biba game will play differently on each playground because each has outdoor space its own design.

how do you keep a child's attention?

The app works with any playground, but PlayPower playgrounds — the partnership mentioned earlier — will have augmented reality features and special digital awards. Over 100,000 PlayPower playgrounds exist in the US alone, many in the company's big name fast food partner, McDonald's. With the app installed, parents will be able to scan a Biba logo stationed at each playground to unlock the custom stuff.

Biba's reps know the game will be free-to-play, but how it monetizes beyond that decision is still being fine tuned. It's possible additional games and items will be available for purchase on top of the free ones. Vandeveer mentions that custom app "skins," essentially custom redesigns, could be made available through PlayPower's partners, like McDonald's or Chuck E. Cheese's.

For future expansion, the Biba team has also begun looking at health monitoring for children. "It’s not there today," says Bojin, "but I think it will be there pretty quickly […] We’ve already started messing around with some wearable stuff internally, just to shake out some of the bugs and the kinks. We think when parents and families start to move into that space, we think we can be right there besides them. That’s why, in a sense, this year’s important for us to get out there, get engaged with audiences … so when wearables pop, I think they probably will for health reasons, we’ve got a Biba plug-in that works well."