With a new album, a high-profile MoMA retrospective, and a slew of concert dates, it feels like you can't throw a rock without hitting something Björk-related this month, especially in New York City. Unless, of course, you're chucking it in the direction of Spotify.

“I don’t know why, but it just seems insane,” the musician and performer told Fast Company earlier this month, about her decision not to put her ninth album, Vulnicura, on Spotify. The album had already been co-opted by electronic means; a leak in January, months ahead of its scheduled release date, forced her team to release it early on iTunes (a physical version, complete with new, anatomically innovative cover art, will be released sometime this month.) Björk has described that involuntary change in plans as serendipitous, later telling FastCo, “I was dying to get this album out and over and done with. So I think in a way it was a strange kind of blessing.”

That kind of quick-pivot, unfussy embrace of certain technological realities, should not be surprising to anyone who has followed Björk for any amount of time, but her reputation as a swan-wearing, back-to-nature, Icelandic fairy queen still endures. So when she decides to forgo Spotify for this album cycle — a particularly emotionally fraught one, if it matters — it's easy to write that off as a relic of the ‘90s, pushing 50, unwilling to adapt to the unceremonious whims of the all-consuming internet. There's a certain level of availability expected from any new release by a contemporary artist, and failure to capitulate to that means you're "behind the times." Never mind that the rest of Björk's catalog — that's eight albums, five live albums, two soundtracks, and a greatest hits collection — are all available on the streaming service. (And never mind that dictating which platform or medium an artist releases their work on is pretty much the opposite of progressive.)

Björk in New York has always made a strange, delightful kind of sense

Her resistance to Spotify is one thing Björk has in common with Taylor Swift, though there are plenty more I can name off the top of my head: the figurehead / tyrant double duty they both pull, their very personal opinions about the role music should play in people's lives, and of course, their adoption of New York City as a second home. Björk moved to Brooklyn Heights in the early 2000s with her then-partner Matthew Barney. (Vulnicura is largely a documentation of their brutal separation, or if you like, Swift's Red a decade and a child later, wrapped in frozen butterfly wings, and sunk to the bottom of a fjord.) The occasional candid paparazzi photos of her out and about in NYC make a strange, delightful kind of sense: the ever-adaptable fairy queen transplanted to a noisy, colorful cityscape, not dissimilar to the one she was in the video for "Big Time Sensuality," riding around on a flatbed truck like a precious import from another planet. 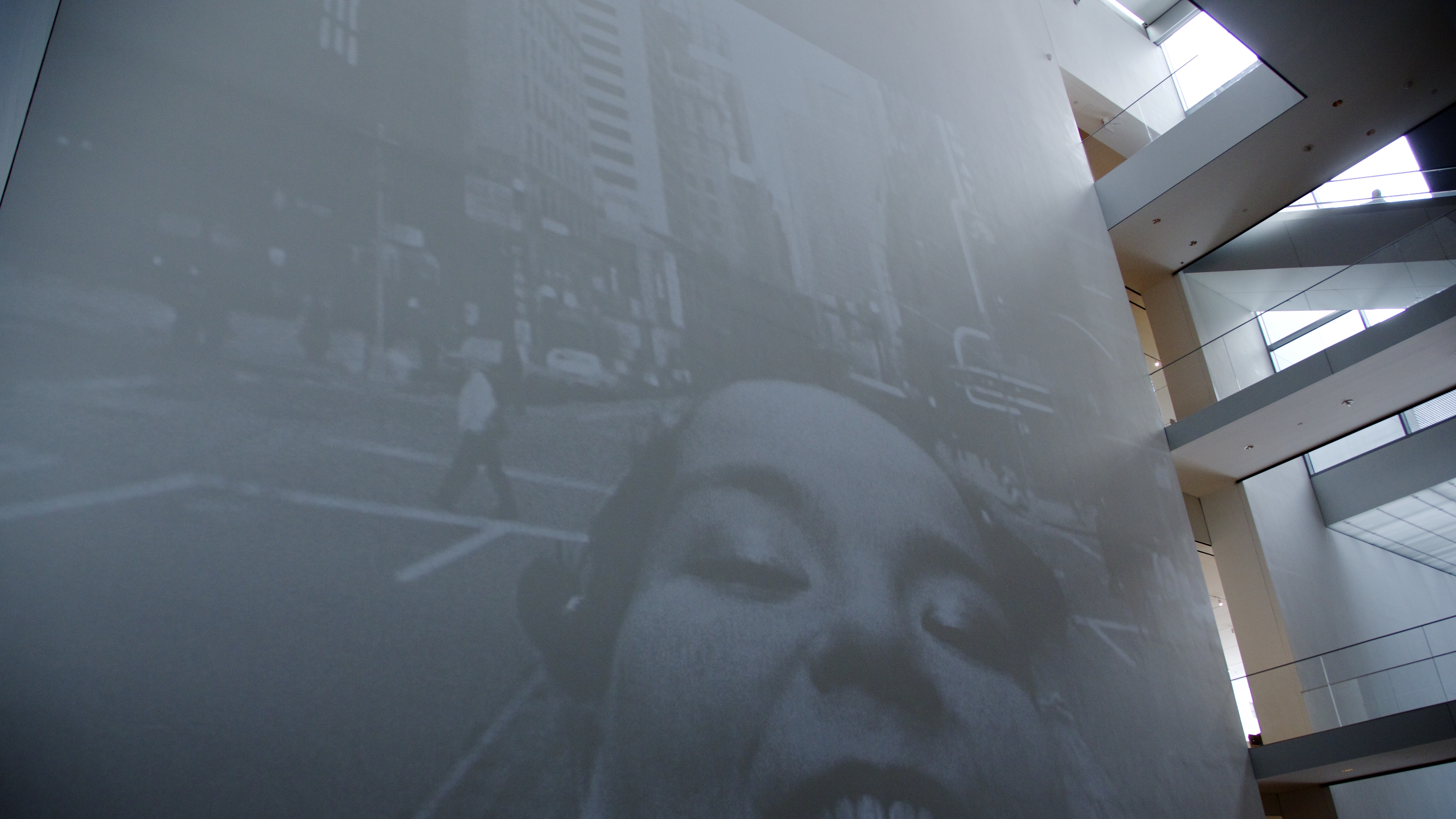 A projection of that video now spans an entire wall in the atrium at the Museum of Modern Art in New York. From multiple levels inside the museum, you can watch the then-28-year-old, skipping around anarchically and pushing her face up in the wide-angle lens. It's a jarring sight, both for Björk obsessives and museum snobs — it's also the most visible evidence of Björk's MoMA takeover for her much-ballyhoo'd retrospective exhibit, which opened this past weekend. Even in an airy space like this, it feels strange to take an artist — who, for all her idiosyncracies and trailblazing, is still a popular musician — trap her, and prop her up on a wall with a gallery tag. Down on the ground level, without the museum-issued audio accompaniment, she's oddly silent. 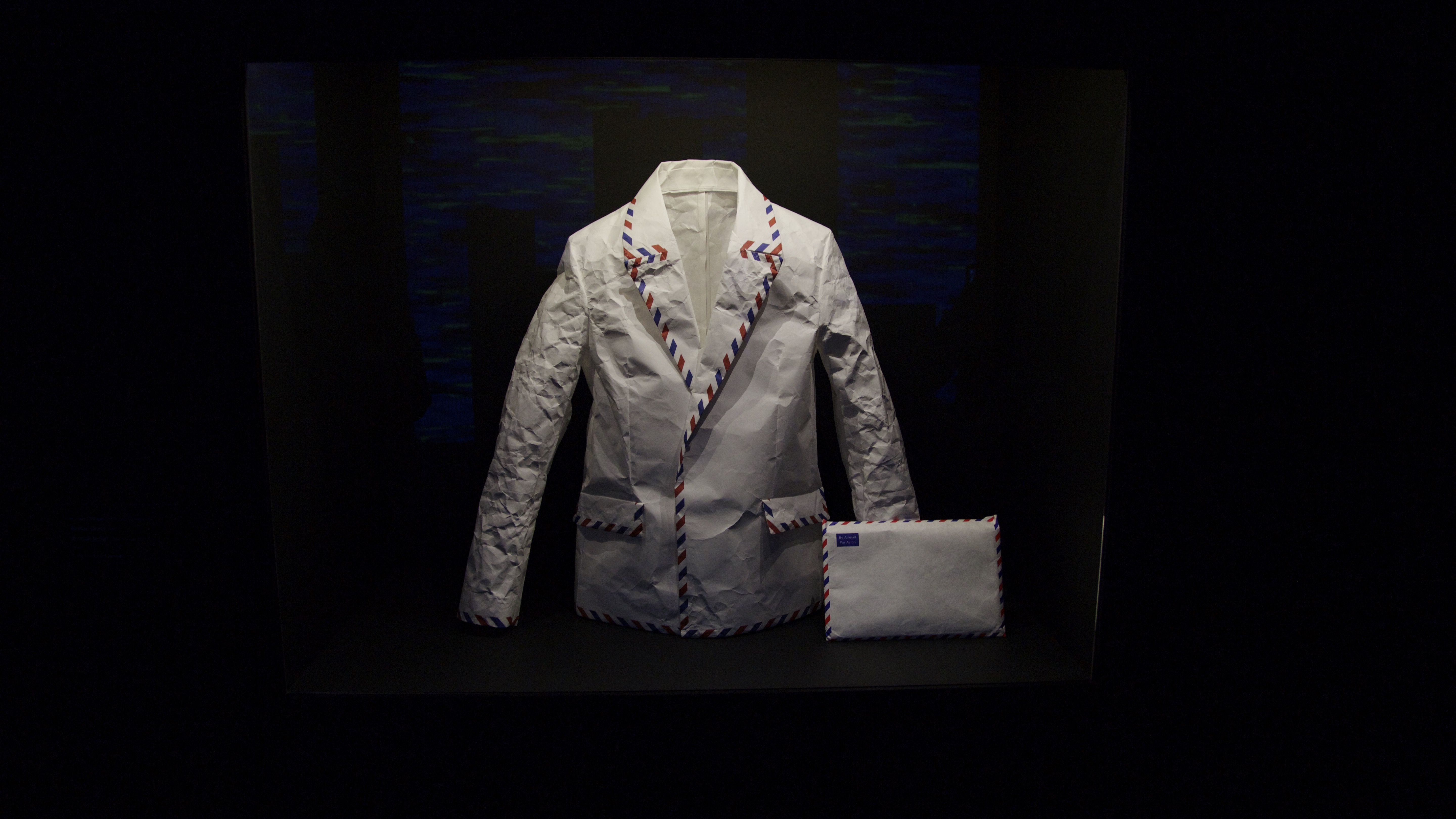 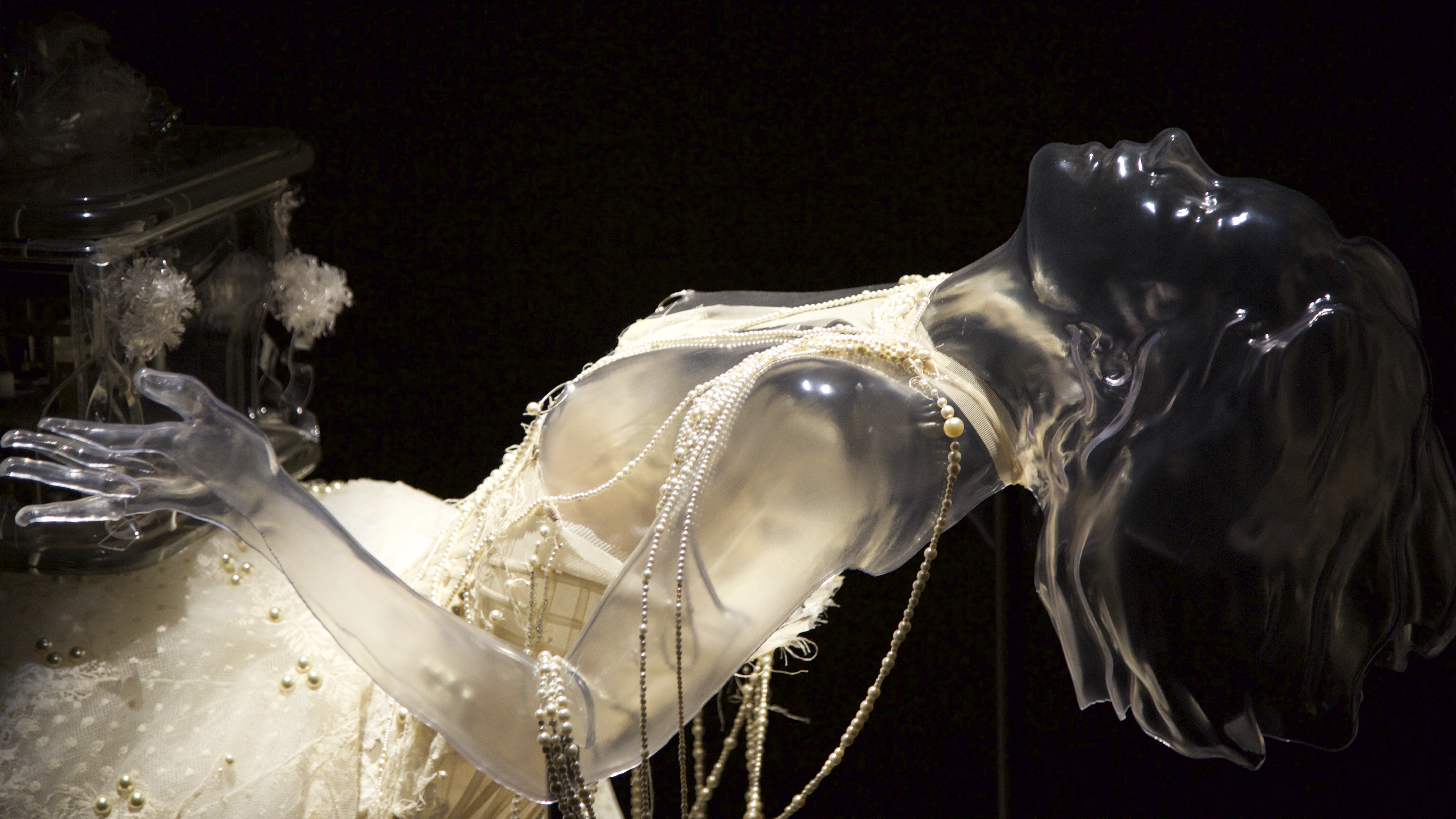 The retrospective is getting destroyed in the press

The retrospective is getting destroyed in the press. It's not hard to see why: in execution, it's convoluted, its small maze of darkened galleries especially inconducive to the throng of journalists packed in last Tuesday (and on Wednesday evening, distracted revelers stumbling upstairs from the Armory Party). In intention, it's less offensive — there is some version of this show, with its modest, but impressive collection of costumes and props, and with such a multifaceted creator at its center, that makes sense for an art museum. There's some version, at the very least, that doesn't end up being so curiously fans-only. (Why is there a framed, slightly animated image of the Homogenic album cover? Why is that girl Instagramming it?)

Walking through Songlines, the central retrospective darkride (seriously, doom buggies would make this thing go much more smoothly), one kind of understands what Björk might have been afraid of when MoMA curator-at-large Klaus Biesenbach referred to the long campaign to get Björk to agree to an exhibit at all. Since he first approached her in 2000, she had continually been resistant to anything that would spend too much time dwelling on the past; Biesenbach eventually sold her on the idea of a "future retrospective," whatever that is.

She might have done well to listen to her gut. As adeptly as Björk has trafficked in spectacle (she was the singer, after all, who once wore a dress big enough to cover an entire Olympics opening ceremony), the Björk Machine has mostly stayed light on its feet, always more interested in its next iteration of the project than its last. She "changed looks" with purposeful fluidity long before Gaga and Katy. (She's more a contemporary of Madonna's, which simultaneously makes all and none of the sense.) Her atavism is outweighed by her futurism; either that or she finds a way to make them harmonious, never more perfectly exemplified than in her lyrics on Post's "The Modern Things," released in 1995: 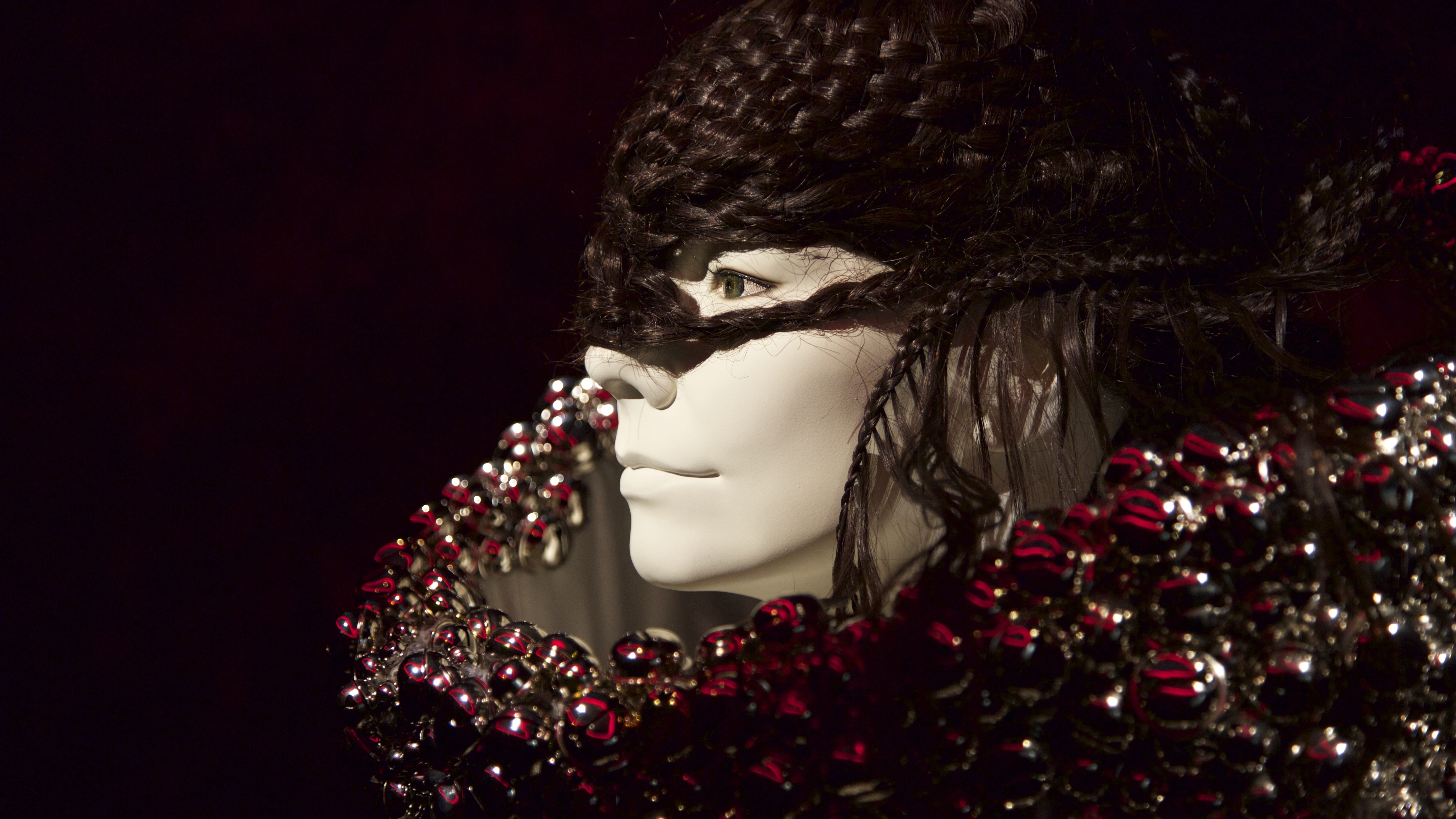 Biesenbach conceded that a 2000 retrospective would have primarily been focused on her music video collaborations (and, I imagine, would have been even more of an art critic troll). But even in 2015, it's still her videos that shine brightest in a museum setting — in the whole exhibit, I was most at peace lounging on a soft foam block in the nearly empty theater where her entire video catalog was screening on loop. I walked in during a particularly good era: starting with "Possibly Maybe" and "I Miss You" (the latter animated by Ren and Stimpy's John Kricfalusi) and ending with Michel Gondry's enduringly gorgeous "Joga" video.

Sure, you can watch all these clips on YouTube — I suspect that's why the theater was empty — but there was something special about seeing them in a museum setting; focused, towering, with great audio. It's not at all how they were "meant" to be seen, but unlike other aspects of the show, they stand up wonderfully to that kind of institutional, reverential hindsight. Shown in chronological order, they also do a better job conveying her constant, cohesive evolution. (Oh, the brief, glorious reign of Ginger Björk.)

Björk also debuted a new film at the retrospective, and it's the strongest element of the show by far. It feels a little dismissive to refer to Black Lake as merely the music video for "Black Lake," the 10-minute centerpiece of Vulnicura; not because it's especially complex or anything — it's literally just Björk wandering through a ravine — but because of its scale, both emotional and cinematic. While the rest of her videos showing in the other theater still feel oriented to television, Black Lake justifies the use of two anamorphic screens and surround sound, because not much else could contain Björk's heartbreaking, intensely physical performance. Björk beats her chest, falls to her knees, keening on a desolate rock bed, and finally strides with arms outstretched across a sunny, mossy plain, a "glowing, shiny rocket, returning home." Black Lake is an epic; personal, specific, universal. And like the rest of Vulnicura, the most emotional parts are not the gory details of what seems like a truly hellish breakup with Barney (not sure how Barney's reputation survives this album, to be honest), but rather its resolve to keep moving forward. 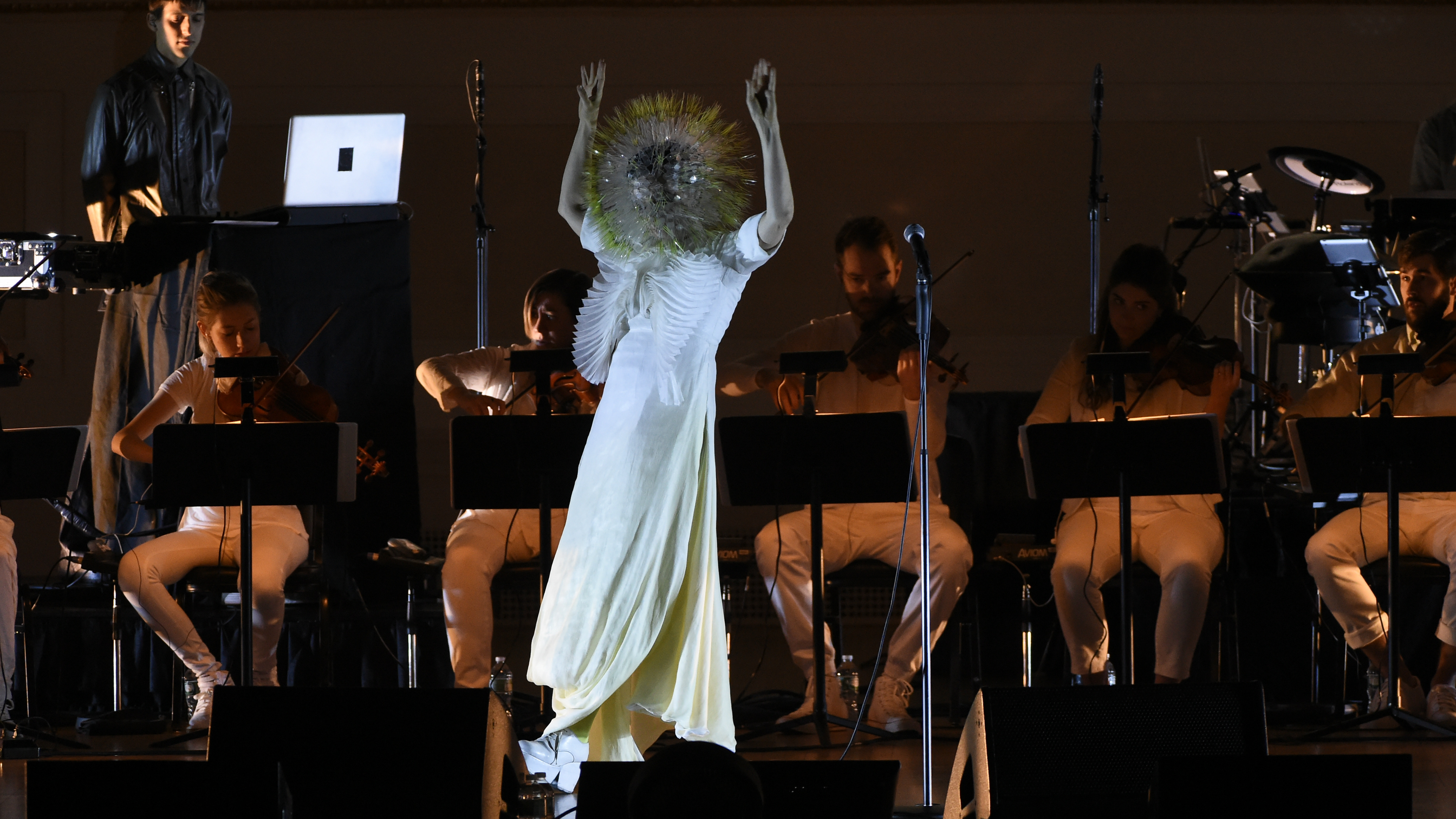 Nowhere was this more felt than three days later, mere blocks from her retrospective, at the first of two Carnegie Hall concerts scheduled in conjunction with the opening. Here in this history-saturated gilded age temple, Björk easily could have done the concert version of the MoMA show, a stroll down memory lane, the definitive setlist any fan would construct were it up to them. Instead the majority of the set was from Vulnicura, the first time most of the tracks had been performed live. Björk closed out the second half with "Mouth Mantra," an agonized, discordant track in which she talks about being silenced, "separated from what I can do, what I'm capable of." When the song reaches its hard-fought climax, in which Björk thanks her mouth for all the "thousands of sounds" it has enabled, the house burst into spontaneous applause.

It was more than fandom, it was gratitude

I've seen Björk do solid Post / Homogenic / Vespertine cuts live and actively bawled for a half-hour; overwhelmed by a life with her music crystallized in a performance. But the emotion in Carnegie Hall at that moment was different; rows and rows of people informed by whatever past associations they have with this ever-changing artist, now going through something completely new and heartbreaking and triumphant with her. It was more than fandom, it was gratitude: an outpouring of love and appreciation for whatever small joy she'd given us over the course of her career. That was the retrospective, as far as I was concerned. And it was a success.