Going through airport security is a miserable experience, but airports are at least starting to figure out ways to get you through the line quicker. Cincinnati/Northern Kentucky International Airport says that the median wait time in its security lines has dropped by a third, going from 13.2 minutes to 8.9 minutes, after installing a system that tracks travelers' phones to estimate how much traffic each line has. The system allows the airport to display to passengers how long the wait in each of its security lines is. It also allows the airport to adjust its resources to respond to demand.

The airport's tracking system, made by Blip Systems, looks for devices over Wi-Fi and Bluetooth. Blip Systems says that it collects each device's unique identifier (MAC address) and then uses that information to determine how many people are present in a given area. There are certainly some security concerns related to tracking like that, but the information it's collecting can only show so much — that your device is present — and, theoretically, that's increasingly little. Blip Systems also says that it anonymizes all data. Plus, everyone is already going through airport security, so it's not like the system would be breaching some bastion of privacy. 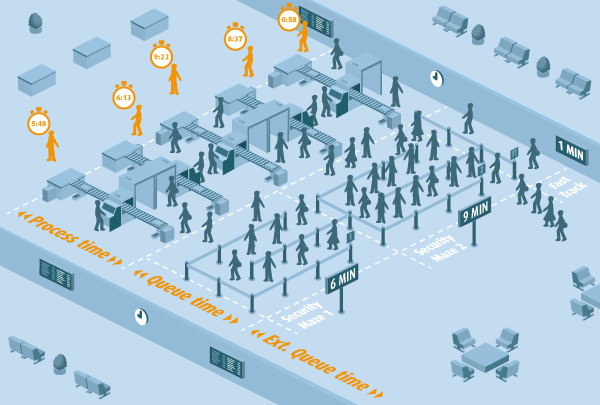 The calculations determining airport wait time were all made by Purdue University, the airport says. Purdue is said to have taken the initial measurement in 2011 using proof-of-concept tracking tech. It then used Blip Systems' measurements to determine this latest calculation during the same time period late last year. If the technology hasn't changed in that time, the measurement should be consistent.

Cincinnati/Northern Kentucky International Airport installed the system over the summer, supposedly becoming the first airport in the US to do so. It isn't the first airport with the system worldwide, however. In an article last June, Bloomberg noted that it had already been installed in 20 airports, including in Amsterdam, Dubai, and Toronto. And improving security lines may be just the start. Bloomberg reports that Blip Systems believes its trackers could eventually be used to determine how many people are in different airport stores and restaurants, potentially even tracking movement around a terminal. That may be less appealing to travelers, but it's hard to argue much with cutting down security lines.