It turns out $149 can buy a lot of smartphone

Crunch. That’s the sound of glass doing a belly-flop on concrete. A couple of months ago, I heard it for the first time. After a long night of Dungeons & Dragons and bar-hopping, I got to my front door, reached for the keys in my pocket, and instead fumbled a Nexus 5 to the sidewalk. I thought I’d be bummed out — but then, a day later, I was fine. The phone still worked, and even though the glass had been shattered, it was totally usable. I even felt morbidly relieved; now that my Nexus had a one-way ticket to the island of misfit toys, I had one less precious object to fret over. Since then I’ve been ready for a cheap, but competent smartphone — one I don’t have to worry about — and I found it in Motorola’s new $149 Moto E. 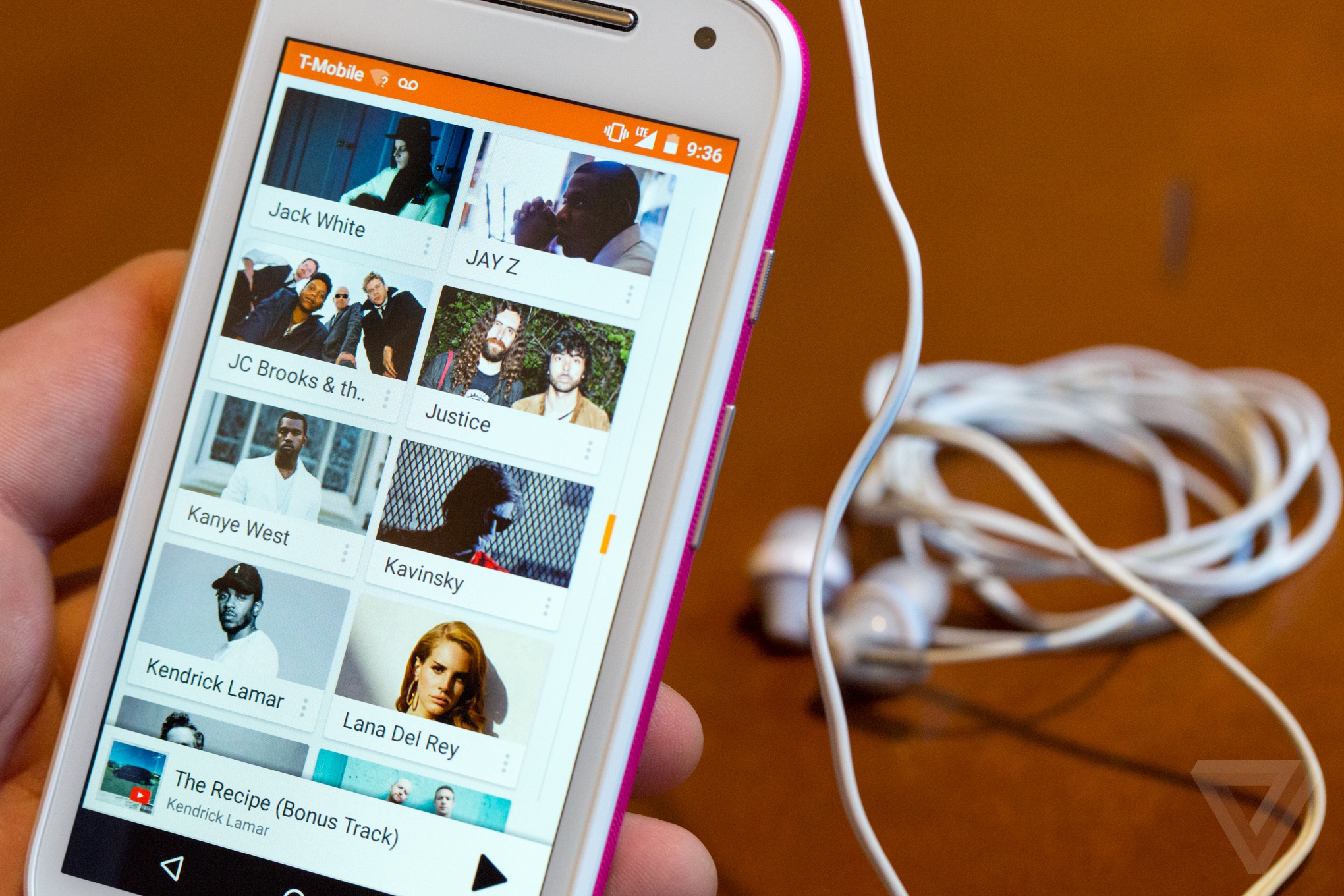 The new Moto E is $20 more than its shockingly cheap predecessor, and this time around it’s got LTE, a bigger battery, and a slightly larger screen. It’s a small bump up in price, but that’s probably okay; it handled streaming shows on Netflix, running Crossy Road and Monopoly, giving me real-time navigation, and everything else I wanted it to do without the sluggish performance I’d expect from a phone this inexpensive. Text on the screen looks a little fuzzy compared to the best displays out there, but I quickly stopped noticing it after a day. 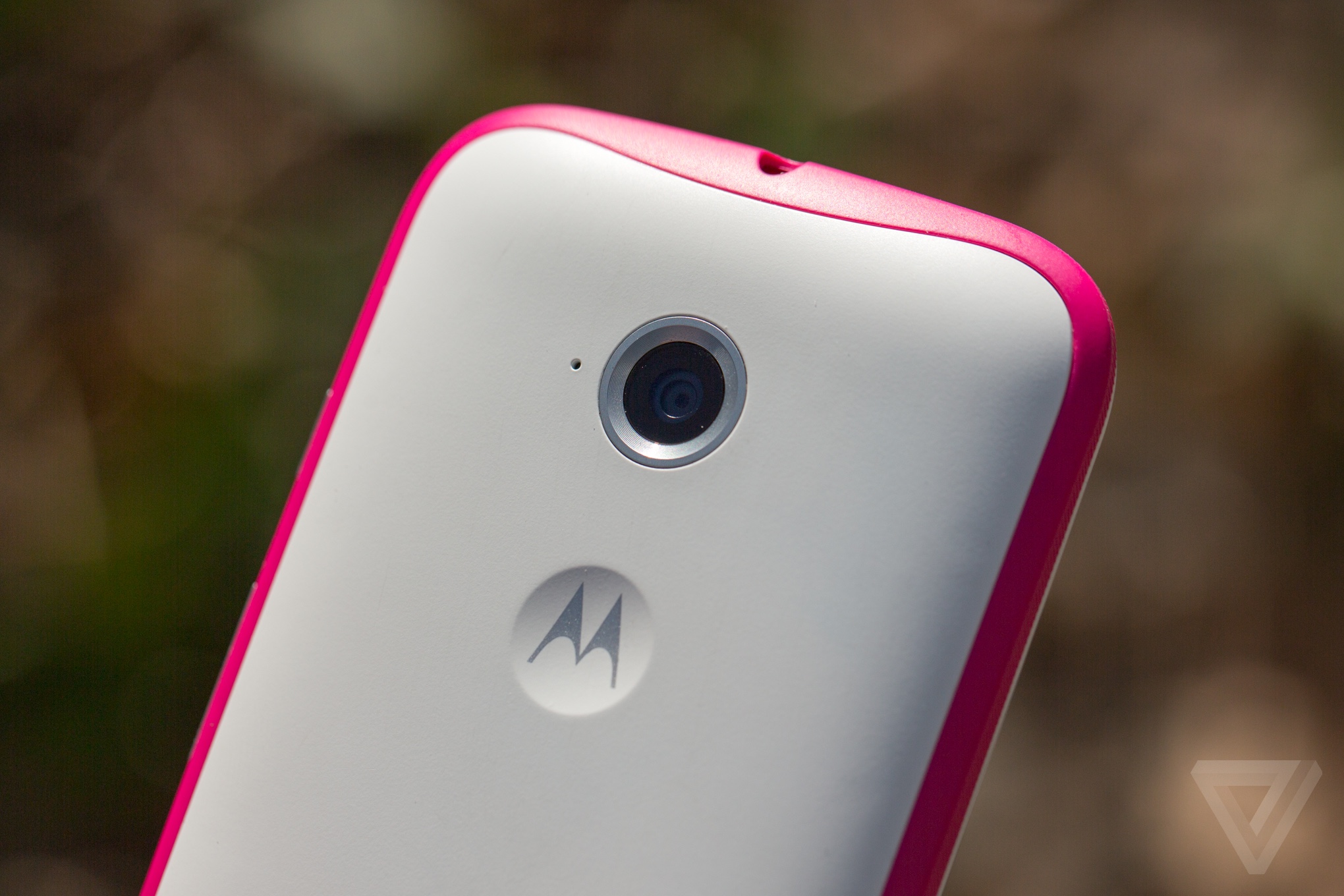 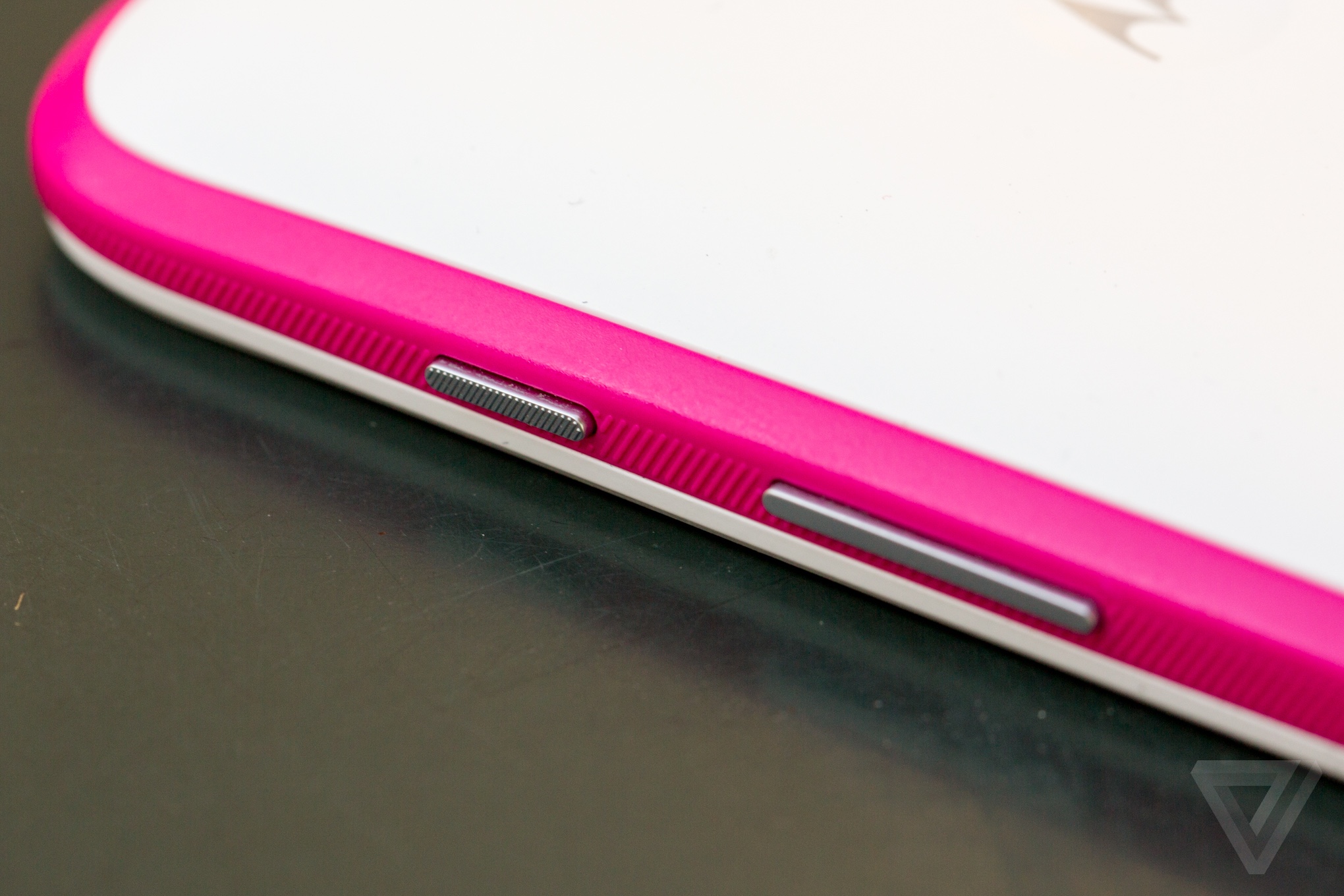 The Moto E's camera is its weakest point

The E is pleasing to look at and hold. I would even call it beautiful. Its curves and lines are utilitarian but friendly, its 4.5-inch screen rests comfortably in my hand, its weight is balanced, and its design is clean of cruft. There’s even a little genius in small details, like the smooth circular depression on the back of the phone with Motorola’s logo in it. When I use the phone with one hand, the bottom landing on my pinky, my index finger naturally rests in the nook. It’s a pleasing sensation, and it makes my grip feel secure when I’m thumbing a tweet or a text message. You can also customize the phone’s look a little bit with swappable colored bands that wrap around its edge. I chose pink.

Thankfully, the software is just as clean as the Moto E’s appearance. It runs a lightly customized version of Android 5.0 Lollipop, and I mean lightly. It mostly feels like stock Android except for a few unobtrusive Motorola apps and quirks. One of the quirks I unexpectedly found myself loving is Quick Capture: a feature that lets you twist your wrist to open the camera app. Sadly I can’t recommend that you ever use the Moto E’s camera. 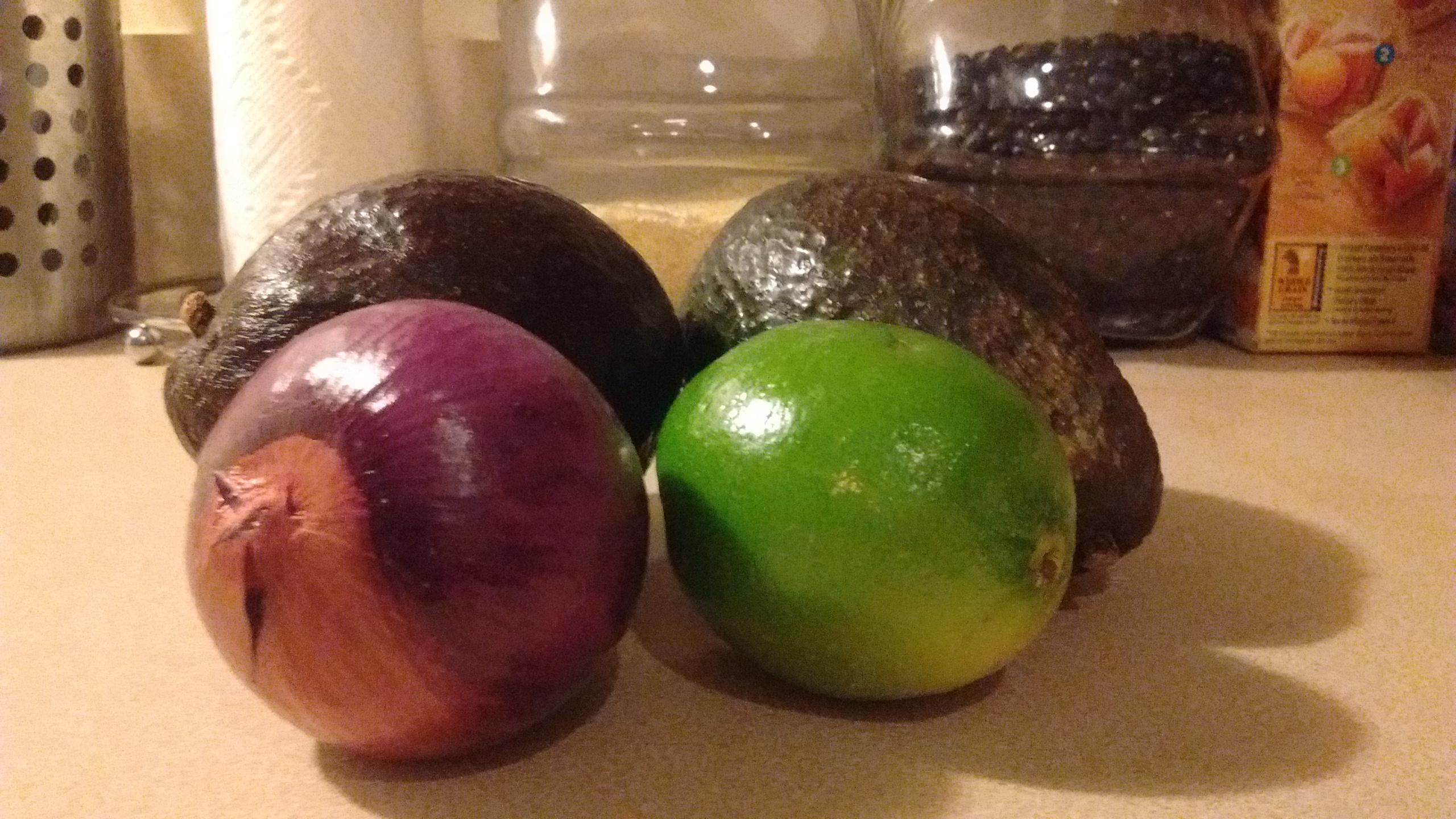 Still, I could see myself using the Moto E every day as my only smartphone.

I’ve been working at The Verge since 2011, and I’ve spent a lot of time with smartphone enthusiasts. I’ve been ribbed by my colleagues on more than one occasion — even laughed at — for having an unfashionably "old" phone in my pocket. But I guess that just makes me like a lot of people out there — unwilling (or more likely, unable) to drop hundreds of dollars on a whim every six months to buy the newest, shiniest smartphone. I think smartphones are marvelous machines, but you’ll probably never see me camp in line for the privilege of spending $800 on a new one.

Fortunately, that thrifty instinct doesn’t keep me from enjoying everything I love about smartphones anymore. (Well, everything except a decent camera.) The difference between last year’s top phone and this year’s top phone is a crack in the sidewalk compared to the chasm between, say, the Motorola Q and the first iPhone. In his review of last year’s Moto E, Vlad Savov called it "the people’s smartphone — the smartphone that makes all others look stupidly expensive." The same is true for Motorola’s latest attempt, and it’s a refreshing counterpoint to the maelstrom of hype that just came out of Mobile World Congress. 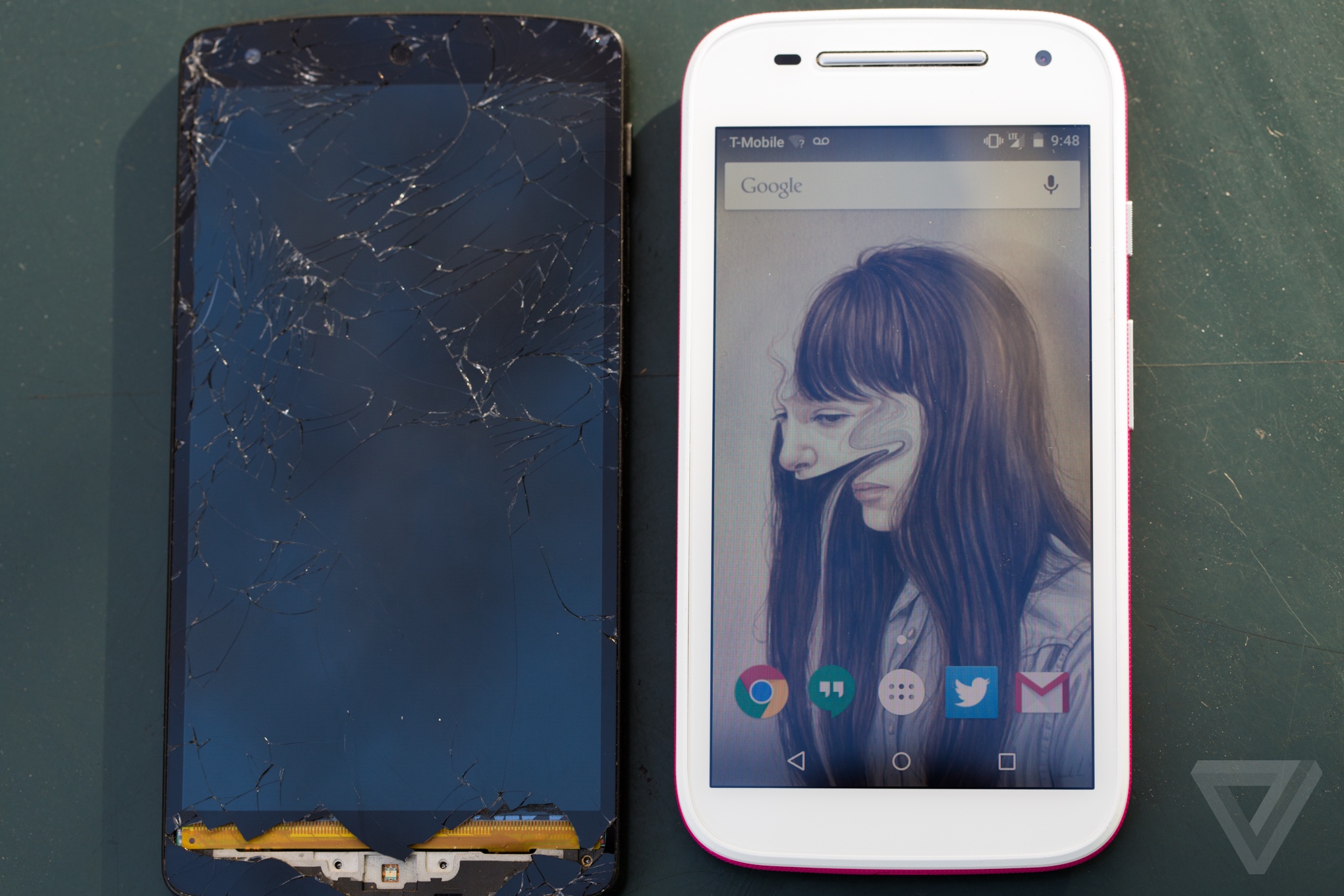 I didn’t grieve for my shattered Nexus 5, but I did agonize for the phone that came before it: an HTC One I bought from T-Mobile at full price in 2013. Last year, a week after its one-year warranty expired, I woke up and found that my One died overnight. It was really upsetting! I couldn’t afford to replace it, and I’m still paying T-Mobile $20 a month for a broken phone. It turns out there’s a huge emotional gulf between dropping a $180 phone on the ground and losing nearly $600. So the best part about a competent, affordable smartphone like the Moto E? It doesn’t control me. I won’t worry as much about losing it, or having it stolen, or dropping it on concrete. That peace of mind is something the newest iPhone or Galaxy can’t offer.