Toy Story, 20 years later: how Pixar made its first blockbuster

At SXSW, Pete Docter and others remember the early days of computer animation

Pete Docter took the stage at Pixar's SXSW panel to rapturous applause, the kind of reception you’d expect for a movie star or rock god. But here at SXSW, where movies, technology, and music swirl together in a multimedia stew, he’s pretty much the same thing. He waved at the crowd sheepishly before settling his lanky frame down into one of the overstuffed black chairs, where he and his colleagues were gathered to look back on Toy Story, the first computer-animated feature that Pixar made 20 years ago.

Docter was a writer on that film and a key part of Pixar’s original brain trust: a core group of writers, animators, and directors that steered the company’s creative direction. He went on to direct Monsters, Inc. and Up and told the audience that he just finished his latest film — the surreal mindtrip Inside Out — last Friday. He smiled with obvious relief, and one got the sense that things get a little crazy at Pixar as they wrap up a film; co-founder Ed Catmull, who had originally been scheduled to be part of the panel, wasn’t in Austin after coming down with the flu last week.

Pixar started as a division of Lucasfilm, and then became a hardware company, making shorts to show off the capabilities of its hardware. But Catmull’s goal was always to make a computer-animated feature, Docter said, and after after Pixar won an Oscar for its short film Tin Toy, it decided to make a half-hour holiday special as its next step forward. "It was a road picture," Docter said of the planned special, in which a ventriloquist’s dummy would team up with the small, one-man-band toy from the award-winning short. 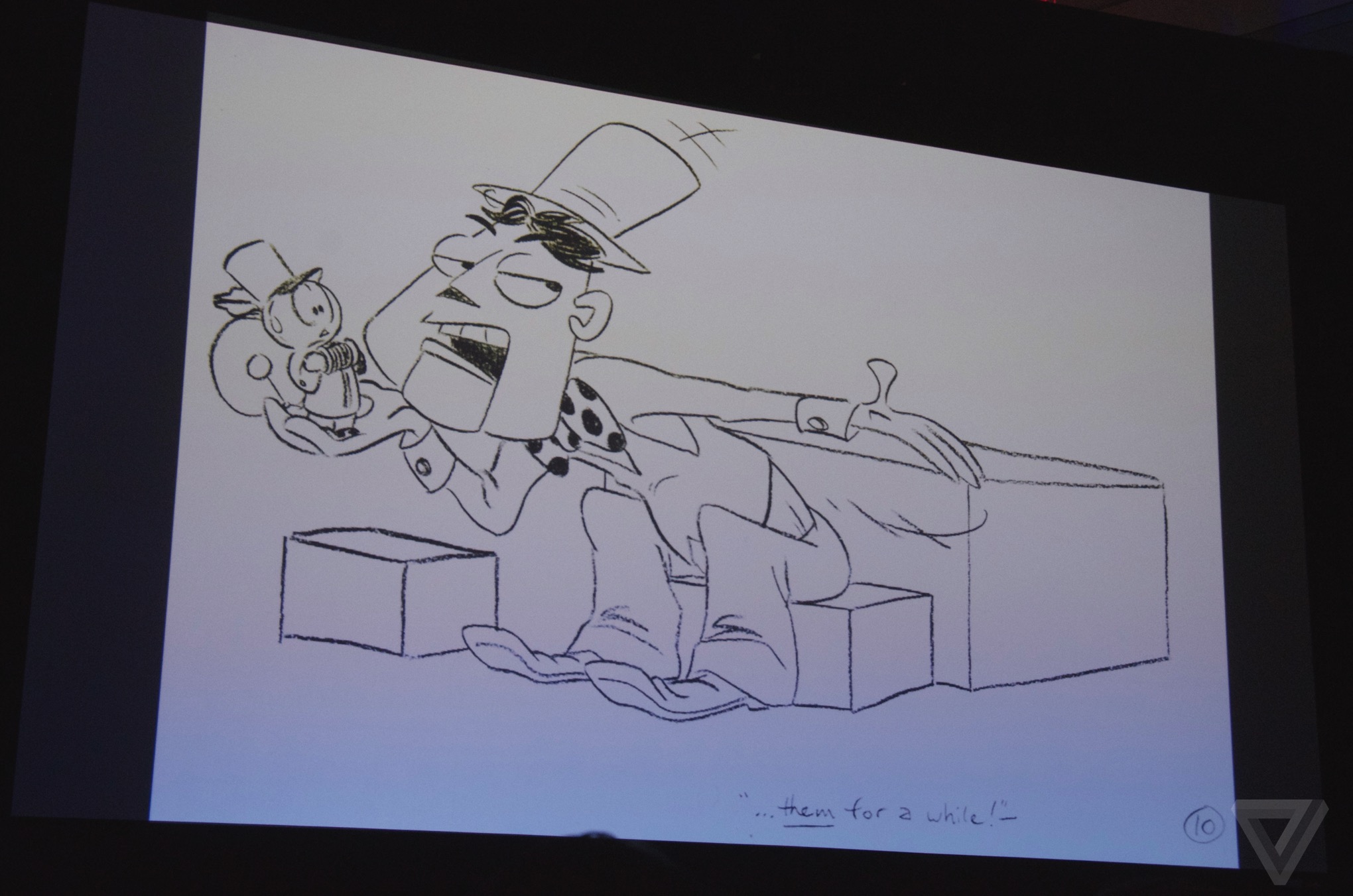 A concept drawing from the original story idea.

That project never came together, but the company then brokered a deal with Disney to make several feature films. "We had a deal in place, but no ideas," he said, so expanding the story of the failed special was the logical move. Brainstorming sessions between Pixar’s creative team — which included Docter, Toy Story director John Lasseter, Andrew Stanton, and Joe Ranft — led to swapping out the tin toy for a "karate-chop action"-style action figure, which became Buzz Lightyear. The ventriloquist’s dummy character was changed at the request of Disney’s then-CEO Michael Eisner, who found the dummies "creepy," and instead became a pull-string cowboy doll: Woody.

"We thought that we would be able to animate the entire film with eight animators."

While Pixar had been making commercials and shorts for years, producer Galyn Susman said that the young studio drastically underestimated the resources needed to pull off a full-length feature. "We thought that we would be able to animate the entire film with eight animators," she said. "That didn’t happen. We ended up with 33." The same went with staffing across the board, from editorial to those working on lighting and the computer models — but the most dramatic gap was in raw computing power.

According to Susman, the Pixar team initially thought they could render the film over 20 months using 53 processors. Each of the machines in the render farm was named after an animal, and when it completed a frame it would play the corresponding animal’s sound. The number of machines eventually grew to 300, but even that pales in comparison to the computing power Pixar wields today. Susman said that the company now has 23,000 processors at its disposal — enough to render the original Toy Story in real time. 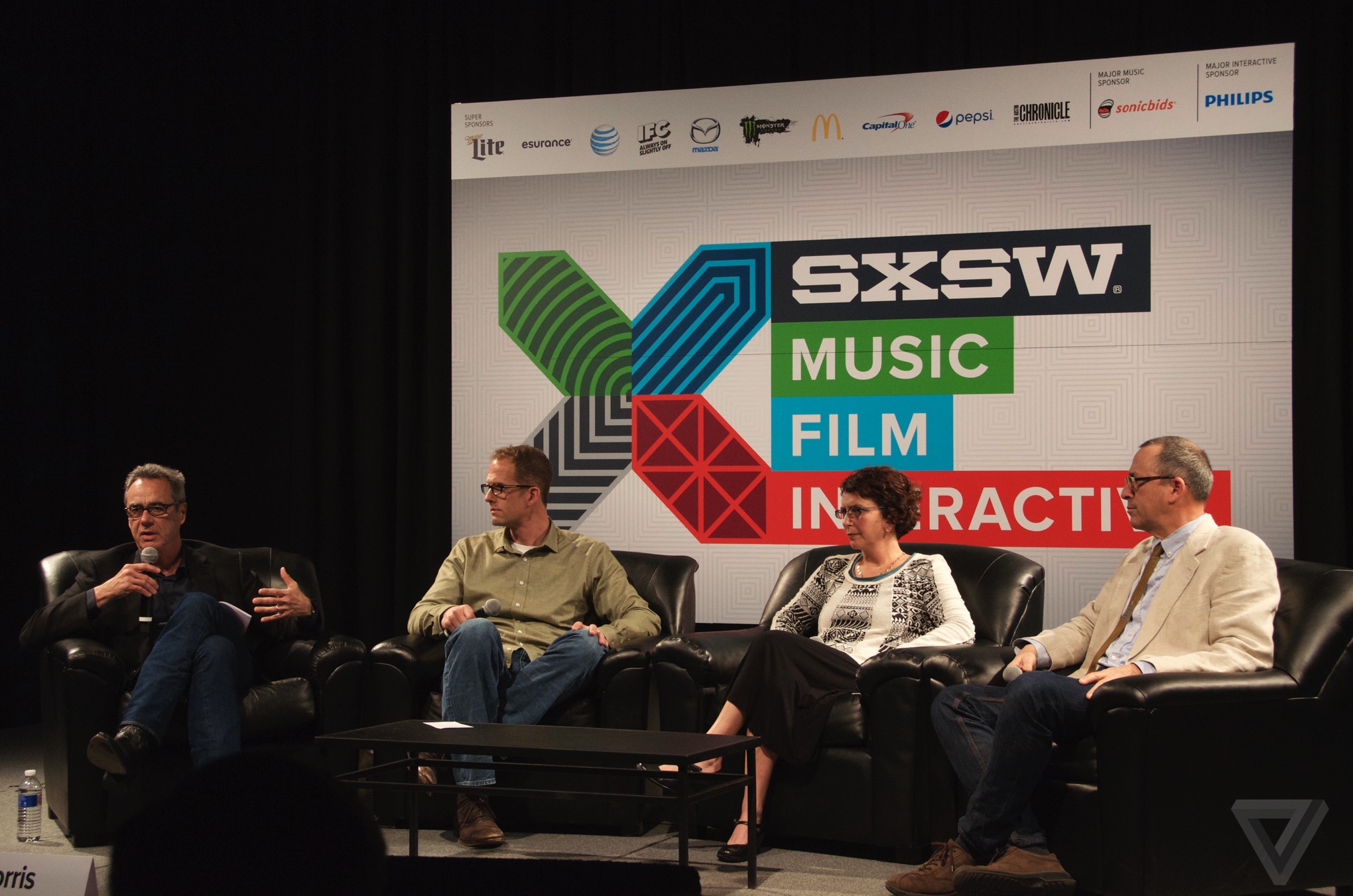 Pixar’s first run of films were nearly universally acclaimed for their attention to story and character — so much so that the studio has endured some warranted criticism in the last few years for a decline in quality. (Catmull and Lasseter began splitting their time between Pixar and Disney Animation Studios in 2006, and subsequent projects like Cars 2, Monsters University, and Brave haven’t been held in the same high regard.) But as Docter told it, the now-lauded writing instincts of the original team nearly led to Toy Story being cancelled outright.

During the writing and storyboarding process, Disney executives were concerned that the characters were too wholesome, leading to a reimagining that made the Woody character "a bit of a jerk." After a disastrous storyboard reel screening, Disney executives wanted to call the movie off and move the Pixar team to LA.

"If we’re gonna go down, let’s at least go down doing what we believe in."

"Ed or John or somebody said, ‘Give us three months and we’re just gonna go for broke,'" Docter recalled. "'If we’re gonna go down, let’s at least go down doing what we believe in.' And so we took three months and boarded like the wind. I don’t think we actually finished the whole film, but we did re-board it to [the point] that they saw a little potential there and didn’t shut down the project."

As we all know now, the movie did move forward, and got a boost with the addition of A-list actors like Tom Hanks voicing the characters. ("He basically got the job because of Turner & Hooch, where [he freaks out about the dog eating the car]," Docter said. "We were like, ‘Okay, that’s the guy.’") Clearly bullish on the long-term prospects of computer-animated films, CEO Steve Jobs took Pixar public one week after the movie’s release, and Toy Story ended up making over $191 million in the US alone.

Soon after, Pixar was purchased by Disney and runs out of its own impressive complex in Emeryville, California. But everyone on the panel — the line-up also included Pixar technical director Eben Ostby — recalled a loose, collaborative environment in the early days, with scooter races and regular games of laser tag after hours. And despite changes in Pixar’s team, criticism about recent films, and an increased number of movies on its slate, it’s clear that the team clearly feels they’re following the same creative process that worked for them in the first place.

"we were part of the first of something. And that's pretty special."

"We still don't know what the hell we're doing," Docter said. "You think I'm joking, but we don't. Every one of these [movies] has the weird ability to completely scramble your brain and fool you into thinking it's working, until you show somebody else." It’s only through their process of creative collaboration, Docter said, that the filmmakers are able to bring their movies together.

"We were always aware that we were making the first film done on computers, but I don’t think any of us really realized that it was a first, like starting a new way of doing animation in any kind of real sense," Susman said. "Even to this day, just thinking about doing this talk, it was like, 'Whoa, we were part of the first of something.' And that's pretty special."

Pete Docter shows off the puppet the Pixar team built to better understand the way Woody's body would move. The face was just a placeholder.
Most Popular
From our sponsor
Advertiser Content From

More from this stream The films, music, and brands of SXSW 2015