Share All sharing options for: Acer Chromebook 15 review: the big Chromebook has arrived

Say the word “Chromebook,” and the image that comes to mind for most people is a small, cheap, basic computer. That’s exactly what most Chromebooks are. The best Chromebooks you can buy have 11- or 12-inch displays, are priced well under $400, and do basic web browsing and not much more.

But the reality of the matter is that most people looking for a cheap laptop don’t want an 11- or 12-inch model. The vast majority of computers purchased in the $400–$600 range have big 15.6-inch displays. And they run Windows. Even though Chromebooks have long been billed as the computers for “everybody,” they haven’t been the computers for most people.

That’s starting to change, however, as Google’s Chromebook partners are beginning to embrace the larger Chromebook. Last year, one of the most popular models on the market was HP’s Chromebook 14, an arguably terrible option with poor build quality and a lousy display whose only saving grace was that it was big. Now Acer is launching the Chromebook 15, the first Chromebook with an even bigger 15.6-inch display. It goes right for the heart of the cheap Windows laptop market: the giant hulks of laptops priced around $400–$500 that fill Best Buy and Walmart’s shelves.

The Chromebook 15 actually starts at $249, a significantly lower price than most Windows laptops. But that rock bottom price comes with a low-res 1366 x 768 pixel display, 2GB of RAM, and 16GB of storage. For the past couple of weeks, I’ve been using the $349.99 model, which steps up to a 1080p display, 4GB of RAM, and 32GB of storage. It’s powered by a dual-core Intel Celeron processor — a real laptop chip, as opposed to the lower-power mobile processors used in other Chromebooks. I strongly recommend ponying up for the more expensive model; the increased screen resolution and added RAM make for a much better experience. And even with those upgrades, the Chromebook 15 still falls under the price of the average entry level Windows notebook.

The Chromebook 15’s most defining feature is its most obvious

The Chromebook 15’s most defining feature is its most obvious: it’s big! In fact, it’s bigger than the 15-inch MacBook Pro I use as my daily workhorse. It’s kind of clunky, kind of chunky, pretty ugly, and the white textured finish on my review unit doesn’t do any favors to hide its bulky dimensions. (Acer is also selling a black model, which is definitely more pleasing on the eyes.) That makes it difficult to use on the go: it barely fit on my lap during my commute on the train to the office, and forget about fitting this thing on the seatback tray of an economy seat on an airplane. The all-plastic Chromebook 15 also weighs nearly five pounds, which is practically an anvil in the Chromebook world and is even heavier than my aluminum MacBook Pro.

But none of those things really matter if your computer sits on a desk for the majority of its life. Instead, the big dimensions of the Chromebook 15 prove to be an asset here: the screen is 27 percent larger than a 13.3-inch Chromebook, the keyboard is full-sized and spacious, the trackpad is the biggest you can get on a Chromebook, and there are two big, loud speakers on the deck that pump tunes straight up, instead of to the side or off of another surface. It doesn’t skimp on ports or connectivity either: there’s a USB 3.0 port, a USB 2.0 port, an HDMI port, a full-size SD card slot, a headphone jack, and support for 2.4GHz and 5GHz Wi-Fi networks. For someone that’s going to buy a basic computer for simple tasks and leave it on a desk the vast majority of the time, those are all attractive features.

The 1080p display won’t impress anyone used to the color-rich, high-res panels on MacBook Pros or high-end Windows ultrabooks. But it’s adequately bright, has acceptable viewing angles, and has a matte finish with virtually no glare, which is really easy on the eyes. It also doesn’t suffer from the graininess or harsh colors often seen on other Chromebooks. Aziz Ansari’s latest Netflix special didn’t look great — his black suit and the dark backgrounds on the stage were various shades of dark grey instead of black — but the jokes were no less funny on the Chromebook 15 than they were when I watched it on my plasma TV. The extra screen real estate afforded by the 1080p resolution also lets me put two browser windows side by side, proving that you can actually multitask with a Chromebook. It lacks a touchscreen, but Chrome OS’ support for touch is still nascent, and I don’t miss having one.

The chiclet keyboard is quiet and comfortable to type on, as opposed to the slippery and noisy keyboards on other Chromebooks I’ve used. Its travel is shallower than my MacBook Pro’s, which isn’t much of a surprise, but it isn’t fatiguing to use. The only thing it’s missing is backlighting, but you’ll have to step up to the thousand-dollar Chromebook Pixel to get that on a Chrome OS computer.

Like the keyboard, the spacious trackpad is actually a joy to use. For some reason (Google says it’s thanks to the Pixel), Chromebooks have been racing ahead of their Windows counterparts in trackpad performance, and the Chromebook 15’s trackpad is fast, responsive, and arguably the best trackpad you’ll find on a computer in this price range. It’s got just the right amount of friction to make multi-touch gestures like two-finger scrolling work effortlessly, and it never caused my cursor to jump around erratically. Its low-cost roots are betrayed by the cheap clacking sound it makes when you depress it, but that didn’t hinder its functionality in any meaningful way. To beat this trackpad, you pretty much have to step up to a MacBook Air (or the aforementioned Chromebook Pixel). It’s that good.

The worst part of most cheap computers is their laggy, slow performance when you’re just trying to check Facebook or pay a bill. A lot of Windows laptops and a number of other Chromebooks (especially models with fanless, mobile processors) are frustrating in this regard. The Chromebook 15 doesn’t have this problem: as I’m typing this review, I have 22 tabs open across two windows, plus another window running the Sunrise calendar Chrome app, and it’s not breaking a sweat — the fans aren’t even on. It’s actually disheartening to say that Chrome OS on this $350 computer runs as well as the Chrome browser does on my $2,500 MacBook Pro, but performance has not been an issue the entire time I’ve been using the Chromebook 15. (It also demonstrates how badly Chrome runs on OS X, but that’s a complaint for another time.) Pages load quickly, scrolling is smooth even on resource-heavy sites like ESPN’s front page, and there’s no lag when moving windows or tabs around. Chrome OS is still mostly just a browser, but it sure feels like more than that when I think of all the things I’ve been able to get done on the Chromebook 15.

It’s obvious that the Chromebook 15’s main purpose is to sit on a desk and stay there, but if you do need to move it around and work unplugged, the battery life is actually pretty great. It lasted 11 hours and 32 minutes on our rundown test — significantly more than the 9 hours that Acer claims. In real-world use, it consistently goes for 7 to 8 hours between charges, which is well above the usual 3 to 4 hours you get from entry level Windows laptops.

For years, I’ve been recommending Chromebooks to people looking for a simple, inexpensive computer to do day-to-day tasks, only to be shut down when I suggest a model with an 11- or 12-inch display. There are other reasons stopping people from picking up Chromebooks: networked printer support is abysmal, and if you have a large library of music, the tiny SSDs and 100GB of Google Drive storage aren’t going to get it done. But the Chromebook 15 addresses the number one roadblock for most people: screen size. It also offers many of the features that make other Chromebooks so desirable: fast, simple operation, a great trackpad, and a low sticker price.

I rely too much on desktop apps to make the Chromebook 15 my main computer, but for a lot of people looking for an inexpensive machine to pay the bills, do the occasional video call, and browse Facebook, it’s more than sufficient. And it has the big screen that so many of them are looking for.

The Chromebook 15 is pretty much the exact opposite of Apple’s new MacBook or Google’s new Chromebook Pixel: it’s big, chunky, has more than one port, and is pretty ugly to boot. It’s also about a quarter of the price. But if the MacBook and the Pixel — expensive, technological tours de force with golden and aluminum finishes — represent the future of laptop computers, the Chromebook 15 represents the computer of today. It’s the laptop for the average person that values price over design or portability, but also doesn’t want to put up with the lousy, frustrating experience so often associated with cheap computers.

It may sound counterintuitive, especially if you focus on the bleeding edge of laptop technology, but the biggest Chromebook yet arguably had a real chance of becoming a success in the mass-market, entry-level laptop world. It’s not the computer for people who work all day on a laptop, or for people who are constantly on the road. But for a lot of other people, the Chromebook 15 offers the size they are looking for without the headaches of entry-level Windows computers. There’s your revolution.

Our review of Acer Chromebook 15 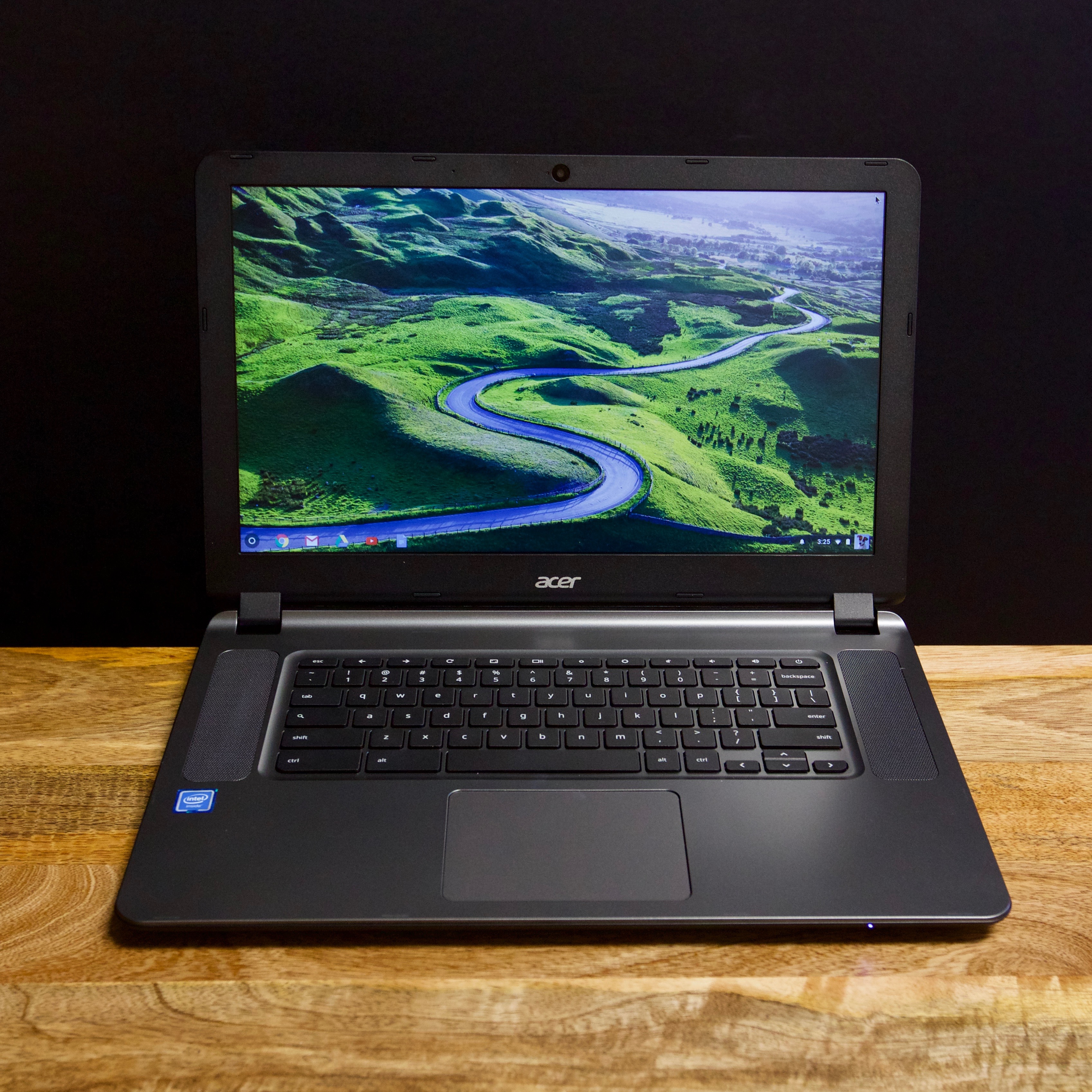