Hellboy creator Mike Mignola is stepping deeper into the world of Gothic horror with his new miniseries, Frankenstein Underground. Fans of Mignola’s particular breed of monster should be excited; as an writer and artist, Mignola has been penning stories about demons and paranormal entities at Dark Horse Comics for more than 20 years. Hellboy, which follows the misadventures of a gun-toting half-demon in the mid-20th century, got its start in 1994 before spawning two cult classic movies directed by modern-day master of horror Guillermo del Toro.

Frankenstein’s monster — the same Mary Shelley unleashed onto the world in 1818 — is now going to have to find his way in the Mignolaverse. After last being seen facing off against Hellboy in a Mexican luchador match, the creature is now lost and alone on a journey that takes him literally underground, as he faces the kind of ancient races you might see in Burrough’s At the Earth’s Core or Lovecraft’s At the Mountains of Madness. I sat down with Mignola to talk about the book, which just hit stores today, and the monster’s place in pop culture.

This is Frankenstein At the Earth's Core

Starting just generally, what is Frankenstein Underground about?

It’s kinda started out as, What if I took the Frankenstein monster and threw him into a Edgar Rice Burroughs sort of underground series. Just banging around monsters and subhuman underground people. And once I started digging around in the plot, and started bringing in more of the elements from the Hellboy universe, then the book took on a really different shape.

You introduced the monster in Hellboy: House of the Living Dead. This is going to be an extension of that?

It departs from Hellboy entirely. I mean, Hellboy appears in one panel in a flashback, but House of the Living Dead took place in Mexico, so it’s just picking up [with] that monster in Mexico, probably just a few weeks after that graphic novel took place. And then the book is entirely about Frankenstein, and things happen that drop him into this underground world. It touches on and develops certain ideas that are in Hellboy and the BPRD [Bureau for Paranormal Research and Defense] books as far as this history of these prehistoric civilizations, and a lot of the stuff I had going on with the various Victorian characters. It fleshes out some of the history of the Hellboy world, but stands entirely on its own.

"It fleshes out the 'Hellboy' world, but stands entirely on its own."

How are you balancing Mary Shelley’s original work with your own style?

Well, that was a trick. I didn’t realize it was actually the Frankenstein monster [at first], so there was no attempt at all to make him like the Mary Shelley character. In fact, the Frankenstein monster that’s in my head is always the Boris Karloff Frankenstein. So the biggest trick with this book was to take this kind of dumb brute monster I’d started with in House of the Living Dead and kind of rationalize how the Mary Shelley character could have become this character. And then really just finding my own voice for the character, which is not as eloquent as Mary Shelley, but a little bit more conversational than the Karloff Frankenstein. I definitely had to find my own version of this character, even though I reference the Shelley novel and I think I’m faithful to the Shelley novel. There are a couple of scenes that are flashbacks to the Shelley novel, so it’s rooted in the Shelley novel. But the whole point of this book is not really to chew over who the monster is or where he’s come from. It’s to throw him into this particular story, and who he is kind of colors his reactions to things, but his origins [aren’t] the focus of the book.

So he’s striking a balance between the more brutish Karloff version and the poetic Shelley version.
Yeah, he’s definitely more thoughtful than the monster was in the first Karloff film, but Karloff, in Bride of Frankenstein, is a little bit more thoughtful. He’s definitely sadder. He speaks. And that’s the Karloff Frankenstein that’s always in my head. My version of Frankenstein is extremely sad. He feels terrible about a lot of stuff he’s done. He’s got some justifiable anger from the way he’s been treated, which is, I think, all very neatly in Bride of Frankenstein. It wasn’t that big a stretch to say the Shelley character, which is from 1816… if the monster has been around for that long, and been abused and beaten and hunted and blah blah blah, after all these years, by 1956, he’s kind of run down and brutish and doesn’t talk very much. As I script this series, I find as he gets further into this book, he does speak a little bit more. He does articulate more. But for the most part, at least in the early part of the book, he’s not a dumb brute, but he’s not used to having a conversation. 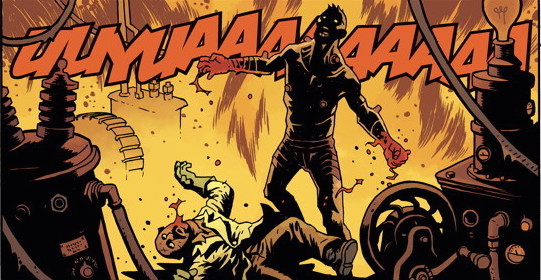 For you as a writer, why Frankenstein in particular? You obviously have a very deep love for the Universal Monsters.

Writing House of the Living Dead, that book was just a parade of different monsters. It’s got the Frankenstein Monster, it’s got a vampire, it’s got some female vampires, it’s got a hunchback, it’s got a Wolfman. It was such a nod to those old Universal movies, like House of Dracula and House of Frankenstein. I needed to have a Frankenstein-type creature in there. The reanimated corpse with the bolts. It’s such an iconic horror image. I needed him in there. But, not until I wrote the back cover copy for the book did I name it the Frankenstein monster. I never would have intentionally said, "Oh now I’m gonna use the Frankenstein monster." It’s just I had this monster who could be Frankenstein, and when it came to writing the back cover copy, the funniest phrase was "...and the Frankenstein Monster!" So, that’s how I ended up having my own version. But once you have him, you kind of file him away and go, "Yeah, that’s one of the dozen different things that we could expand on someday." It’s always good to have six or seven of these different projects that you could do. The original idea was actually to do a series of books about him exploring around underground, and then once I brought this other stuff into it, it really did turn into just one book. There’s no plan to do a second volume. I don’t want to put a number on the spine. It doesn’t mean we couldn’t do another one, but it felt like a one book story.

Do you think it’s timely to come out with something like this now, with I, Frankenstein and Dracula Untold both coming out last year?

I mean, I would think anytime’s a good time for the Frankenstein monster. It’s always something in the works. That didn’t influence me, as far as the timing of the book. If it’s good timing, that’s great. I’ve never looked at what current trends are for why I do stuff. For me, the Frankenstein monster is so timeless, and there’s never a time when people don’t know who that character is. If it helps, that’s great. I will say I have I had not seen the TV series Penny Dreadful before I started the book. And when I watched that show, I realized I probably would not have done this Frankenstein book, because that was such a beautiful handling of the Mary Shelley-type Frankenstein monster that I was would have been intimidated to go anywhere near this character. Fortunately, the series was already half done when I watched Penny Dreadful, so it was too late to put on the brakes.