Microsoft is looking to Office to tempt consumers to buy a Windows phone. At Mobile World Congress in Barcelona today, the software maker is unveiling two new low-cost Lumia smartphones complete with a free version of Office 365 Personal (worth $69.99) for a year. The Lumia 640 is the successor to the popular Lumia 630, and the Lumia 640 XL replaces the larger Lumia 1320. The XL naming marks a move by Microsoft to move away from the, often confusing, numbering scheme across its range of Windows-powered Lumia smartphones.

The Lumia 640 is the smaller of the pair, and includes a 5-inch 1280 x 720 screen with what Nokia used to call its Clear Black Display. I had an opportunity to get an early look at the Lumia 640 and I was impressed that Microsoft hasn’t put a poor display in this low-end device. It’s using Gorilla Glass 3 and Microsoft is even bringing its clever Glance user interface to this model. Elsewhere, there’s 1GB of RAM and 8GB of storage. That’s a small amount of storage for a modern smartphone, but at this end of the scale it’s on par with similarly priced devices. As this is a low-end device, Microsoft is using a 1.2GHz Qualcomm 400 quad-core processor. 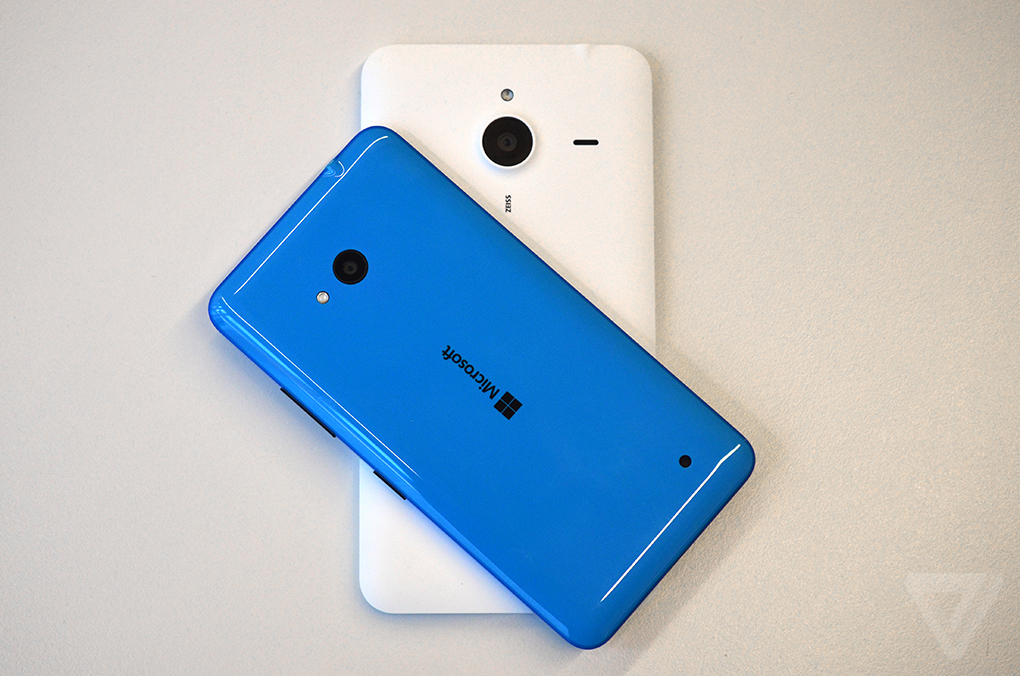 Perhaps surprisingly, Microsoft is using an 8-megapixel camera with LED flash at the rear. Such a camera would have been found on most high-end smartphones only a couple of years ago, so it’s encouraging to see this tech pushing down to more affordable price points. Microsoft isn’t skimping on the front-facing camera either, with a 1-megapixel shooter with wide angle lens. Perfect for all those selfies you know you secretly take. Even more interestingly, Microsoft is bringing its Lumia camera software to the Lumia 640, so you get all the great flash adjustments that we were particularly impressed with during our testing recently.

The Lumia 640 XL is the bigger brother
The Lumia 640 XL is the bigger brother in the family. While its predecessor, the Lumia 1320, featured a massive 6-inch display, Microsoft has scaled back slightly this time. A 5.7-inch display can be found on the Lumia 640 XL, running at 1280 x 720 resolution. Most of the internals are the same as the smaller Lumia 640, but Microsoft has decided to upgrade the camera on the Lumia 640 XL. A 13-megapixel camera with LED flash and Carl Zeiss optics is available at the rear, and at the front there’s a 5-megapixel camera with wide angle lens. That’s an impressive camera combination for a device that will retail at 189 euro ($211).

During my brief testing, I found both phones were rather basic and, dare I say it, a little boring. That’s not a bad thing, because for the vast majority this is simply a low-end device that’s a bargain for the price. Microsoft needs more people to use Windows Phone to convince app developers to create apps for the platform, and devices like this help that situation. If you’re looking for a high-end Lumia, then prepare for disappointment. Microsoft says it’s not bringing a flagship Lumia device out until Windows 10 is ready. That means the wait for a high-end Lumia will continue until later this year.

Microsoft is planning to release the Lumia 640 in April with LTE and 3G variants. The 3G version will start at 139 euro ($155), and the LTE variant will be priced at 159 euro ($178). The larger Lumia 640 XL will debut this month priced at 189 euro ($211) for the 3G version and 219 euro ($245) for the LTE variant. If you’re interested in dual-SIM versions, then both the Lumia 640 and Lumia 640 XL will be available in 3G dual-SIM, and LTE single- and dual-SIM. Both will be available in cyan, orange, black, and white, and the Lumia 640 has glossy removable covers with the exception of a matte black version. The Lumia 640 XL has matte removable covers with the exception of a glossy white version.