Where Chi stands for compromise

Take a look at the side profile of your laptop. Chances are, it's anywhere from a half an inch to an inch thick, replete with a handful of USB ports, a power plug, headphone jack, and maybe an SD card slot. I can all but guarantee that it's thicker than the laptop I'm currently using to write this article, Asus' Transformer Book T300 Chi. The $699 T300 Chi ($899 as tested) is a sliver of a computer, closer in size to the average tablet than a full-blown laptop.

In fact, the T300 has a lot more in common with an iPad than an ultrabook. As with many Windows 8.1 machines, it's a convertible laptop, with a detachable keyboard and full touchscreen. But unlike many other convertibles, the T300's tablet portion is only 7.6mm thick and it doesn't have any full-size USB ports, HDMI ports, or SD card slots. Like Microsoft's Surface Pro 3, all of the T300's major components are crammed into the tablet area, including its 12.5-inch, 2560 x 1440 pixel IPS display, Core M processor, 8GB of RAM, and 128GB SSD. The Core M processor lets the T300 do away with the fans (just like Apple's upcoming new MacBook) and gives it that tablet-like profile. When attached to its Bluetooth keyboard, the T300 is still only 16.5mm thick, though the combined 3.14lbs of the two parts is more laptop-like than tablet-like. 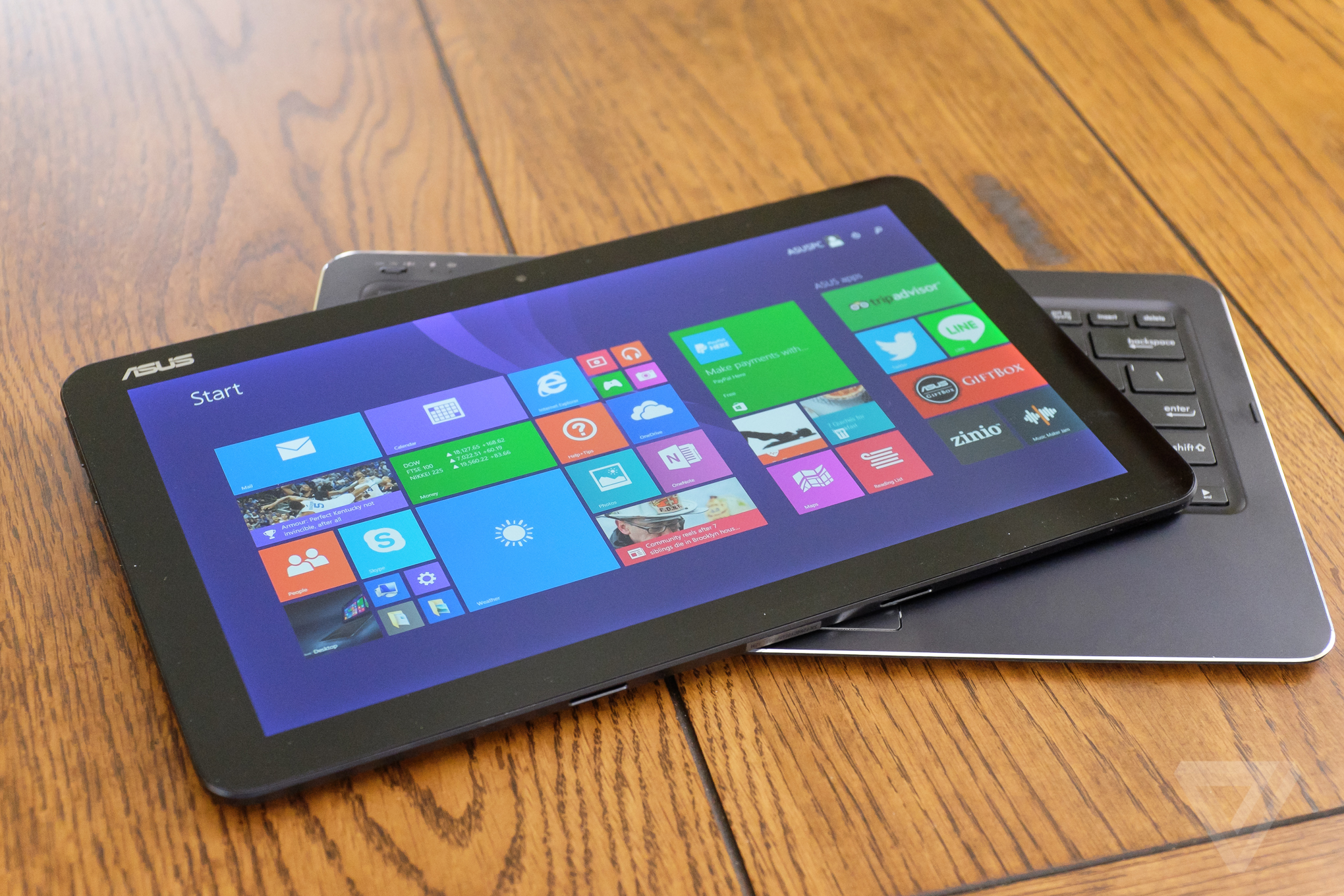 In place of the standard ports you might expect to find on a laptop, the T300 has one Micro USB port, one Micro HDMI port, and a microSD slot hidden on its bottom edge. That means connecting any peripherals requires the use of adaptors, whether you just want to plug in a standard thumb drive, output video to an external display, or use a wired mouse. Those are the compromises that come with such a thin computer, and Apple's upcoming MacBook will require jumping through many of the same hoops. 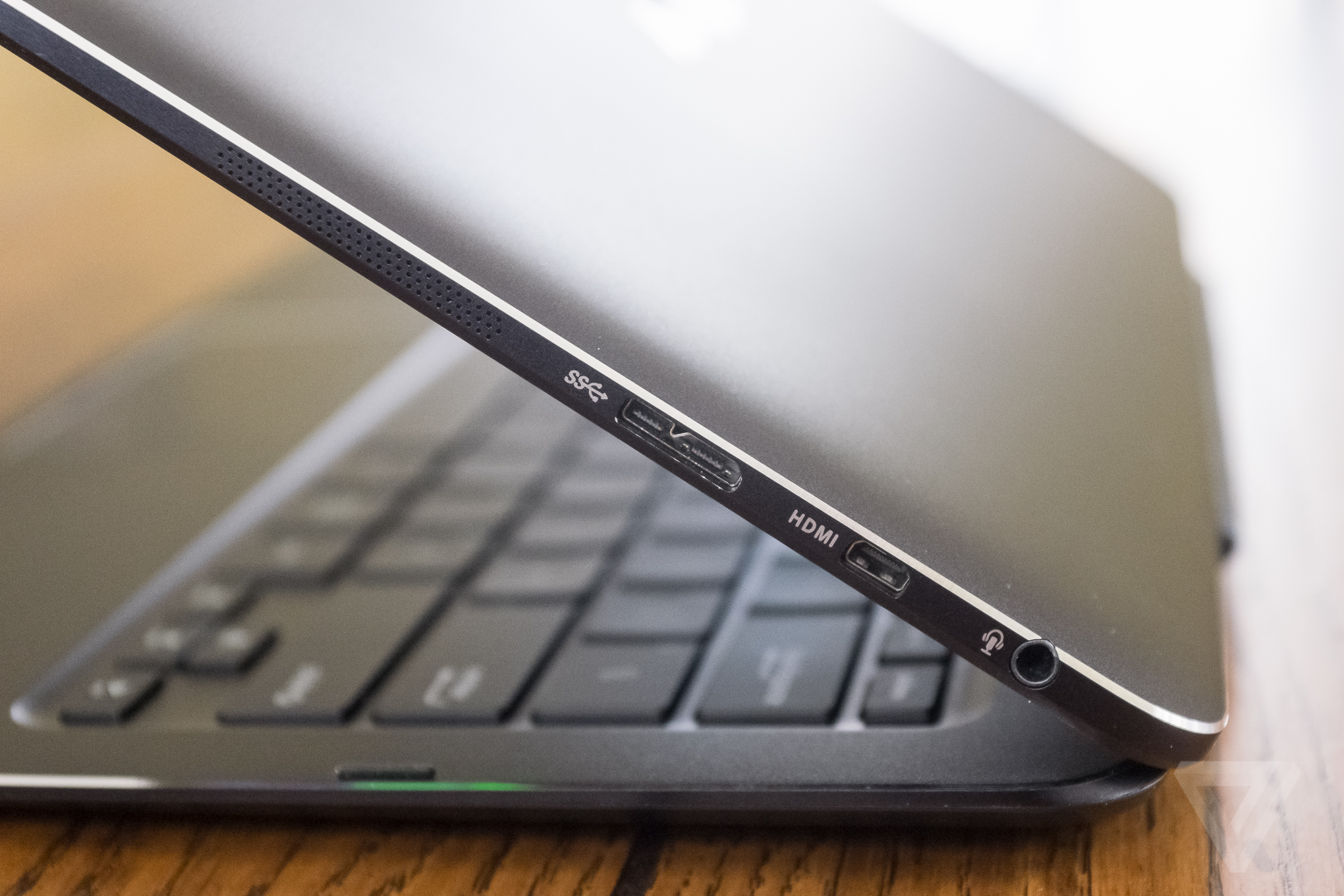 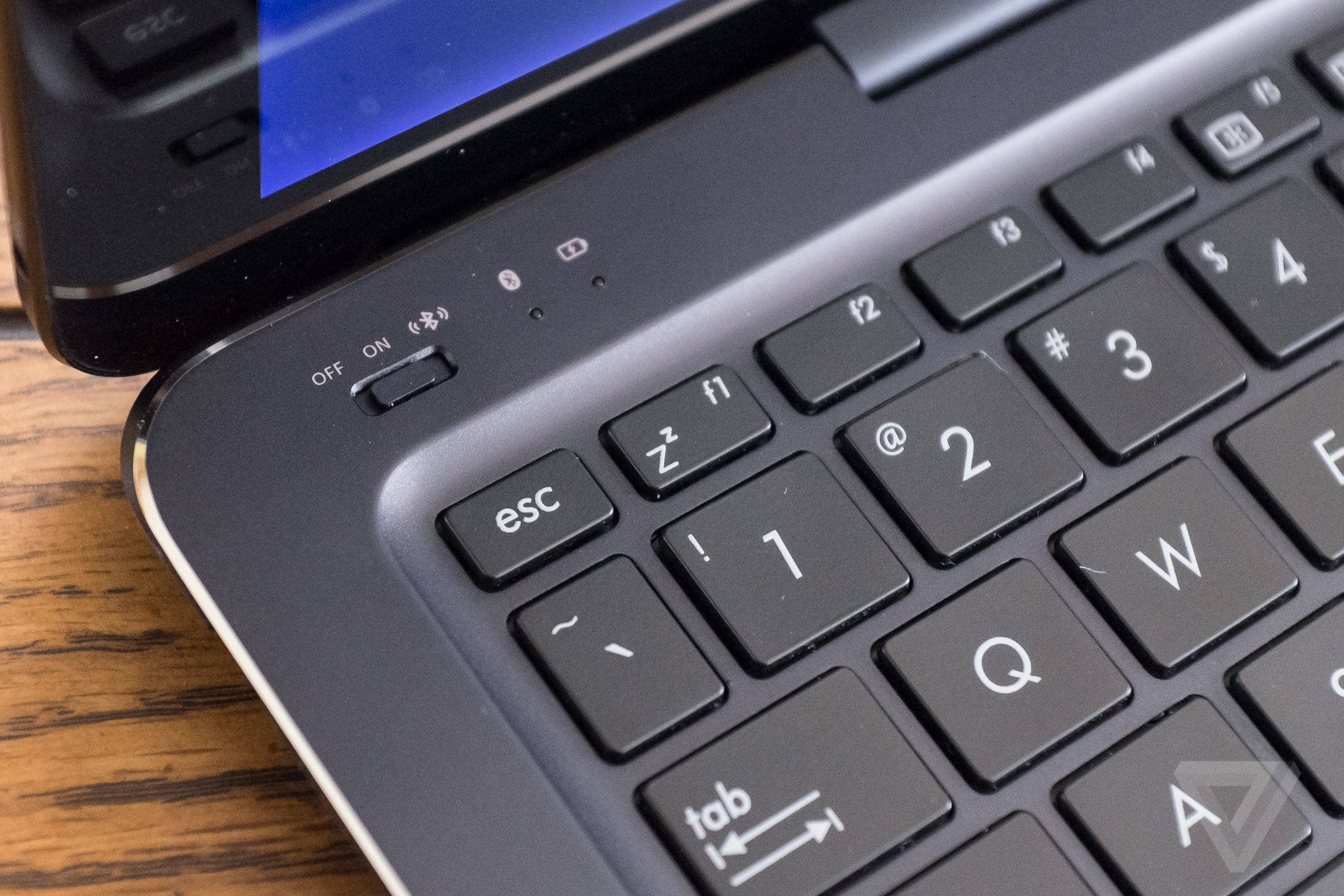 But there are other compromises with the T300 that make it tough to use as a daily machine. The Bluetooth keyboard (which is included and matches the main computer's attractive, but fingerprint prone sapphire blue finish) offers a large layout, but the keys are shallow and don't have backlighting. The deck below the keyboard is very short and isn't enough to support my hands for long periods of time. And the trackpad, while responsive to both single and multi-touch gestures, is very small and tedious to use. The two halves of the T300 connect with magnets, but unlike the Surface Pro 3, they don't talk to each other through the attachment point. The keyboard communicates with the main tablet part strictly via Bluetooth, which means there is often an annoying delay as the keyboard wakes up and pairs with the tablet when I open the computer and type in my password. Further, the T300 Chi has a slight wobble when it's on a flat surface and the screen is tilted all the way back (which isn't very far).

The T300 Chi is a study in compromises

Like so many other Windows 8.1 convertibles, the T300 is also rather awkward to use as a tablet. It's over one and a half pounds without the keyboard, and its large display combined with fat bezels make it much more clumsy to use than an iPad Air 2. The 12.5-inch, 16:9 screen works best in landscape mode, and while it has lots of resolution and wide viewing angles, there is uneven backlighting that's distracting and hard to ignore. Combined with the fact that Windows 8.1 is better suited for desktop environments than as a tablet interface, the T300 is best thought of as a laptop that can work as a tablet in a pinch, not the other way around. 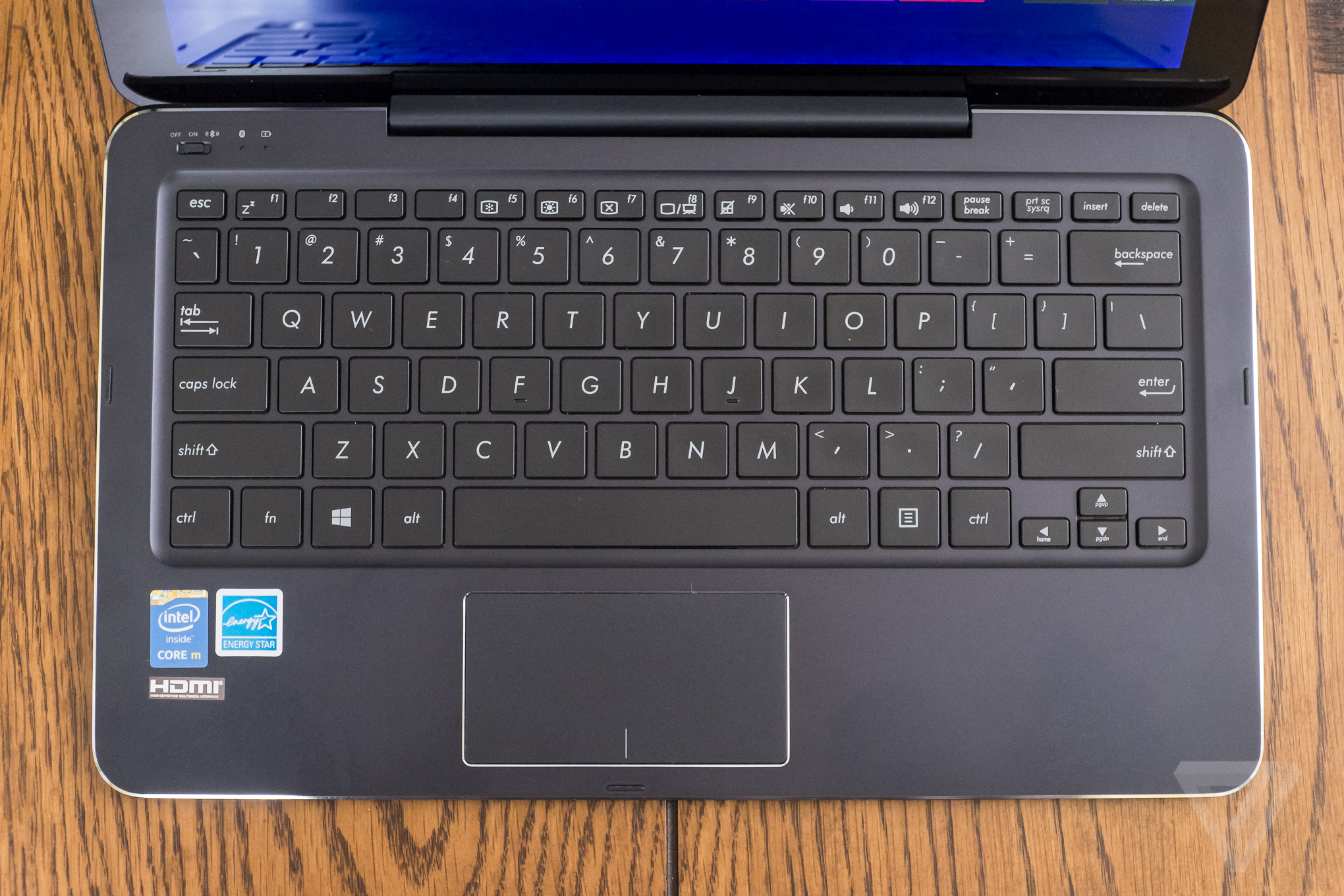 The Core M processor in my review unit is clocked at 1.2GHz and combined with the 8GB of RAM on tap, has no trouble handling most basic computing tasks. It surely won't play any modern 3D games, but working in Chrome, Word, and other Windows 8.1 apps is no issue. I'm able to have as many tabs open in Chrome as I need without the system grinding to a halt, and switching between apps is quick and painless. I often forgot that I was using a computer that was more tablet than laptop, though the heat from the back of the T300 was enough to remind me that this is a full-blown Windows 8.1 machine and not a crippled charlatan faking the role.

In addition to the heat, the speed and power in the T300 Chi come with less battery life than you'd expect from a tablet or even a modern ultrabook. The T300 lasted for 6 hours and 38 minutes in our rundown test, and in normal usage of browsing the web in Chrome, chatting with coworkers in Slack, and typing in Microsoft Word, the battery would kick the bucket in about five hours. That's a lot less than the iPad Air 2 musters, and it's far behind what you can get with the Surface Pro 3, which might be the T300's closest analogue in terms of performance and design (if not price). The T300 could be the ultimate road warrior's computer, but its average battery life make it hard to go all day away from an outlet. 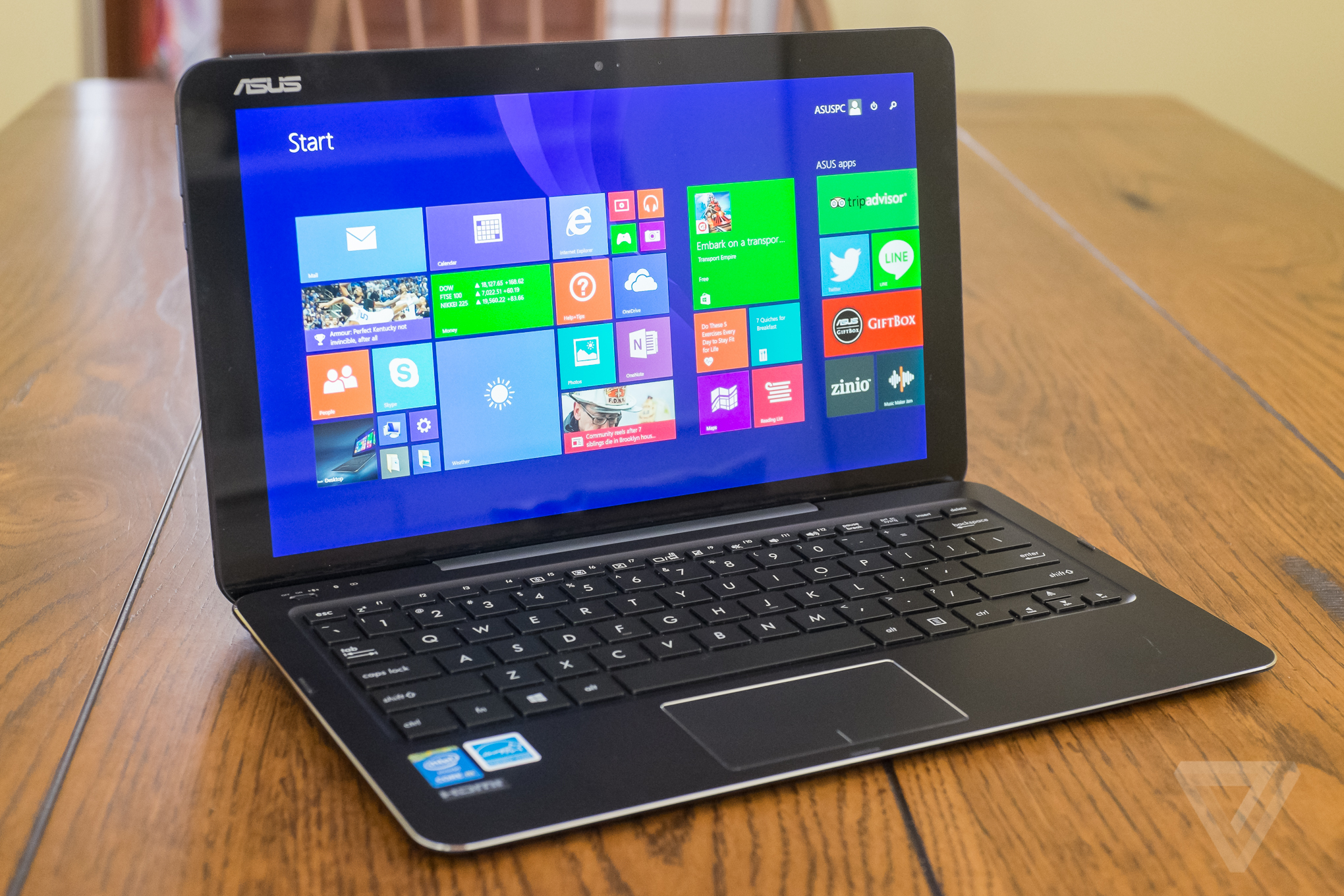 Many have looked at Apple's upcoming MacBook as the future of laptop computers, even if it's too forward-thinking for where we are today. The T300 Chi is very similar to the MacBook in many respects: it's incredibly thin, solidly built, and attractive to look at. It also comes with many of the same compromises as the MacBook, namely a lack of port options. But the T300 does things differently than the MacBook will, and its attempt to be both a laptop and tablet at the same time don't do it any favors.

I'd love to have a Windows ultrabook that's as thin and powerful as the T300, but doesn't pretend to be anything else. Give me a full laptop chassis in place of the detachable keyboard, longer battery life, and a slightly better display with the bezels of Dell's XPS 13 and I'd have a machine that I could easily use all day. The T300 is close, and as a taste of the future, it's pretty cool, but it's not quite there yet.