“It’s like Smash Bros.,” my teammate muses between Heroes of the Storm matches. “Except with DotA. And fan service. And ...”

He hesitates. “And silliness.”

Blizzard has been long overdue for a foray into the fiefdom of Defense of the Ancient-esque titles, an offshoot of real-time strategy games that sees two five-person teams fighting down three lanes to be the first to overrun the other’s base. (Otherwise known as MOBAs, short for multiplayer online battle arena.) Heroes of the Storm is the company’s big attempt to take on the massive successes of League of Legends and Dota 2, titles that command huge, rapt audiences, making them among the most popular — and lucrative — games in the world. The irony is that the company was inadvertently responsible for grandfathering the original Dota, a mod for Warcraft III, which was in turn inspired by a custom-designed map in Starcraft, Blizzard’s seminal sci-fi real-time strategy game.

That said, the World of Warcraft developer is making up for lost time with incredible exuberance and no small amount of cartoony style. Heroes of the Storm takes characters from franchises like Diablo and Warcraft and puts them together into what Blizzard calls a "team brawler", essentially a more approachable take on the often daunting sub-genre of online action-strategy games. 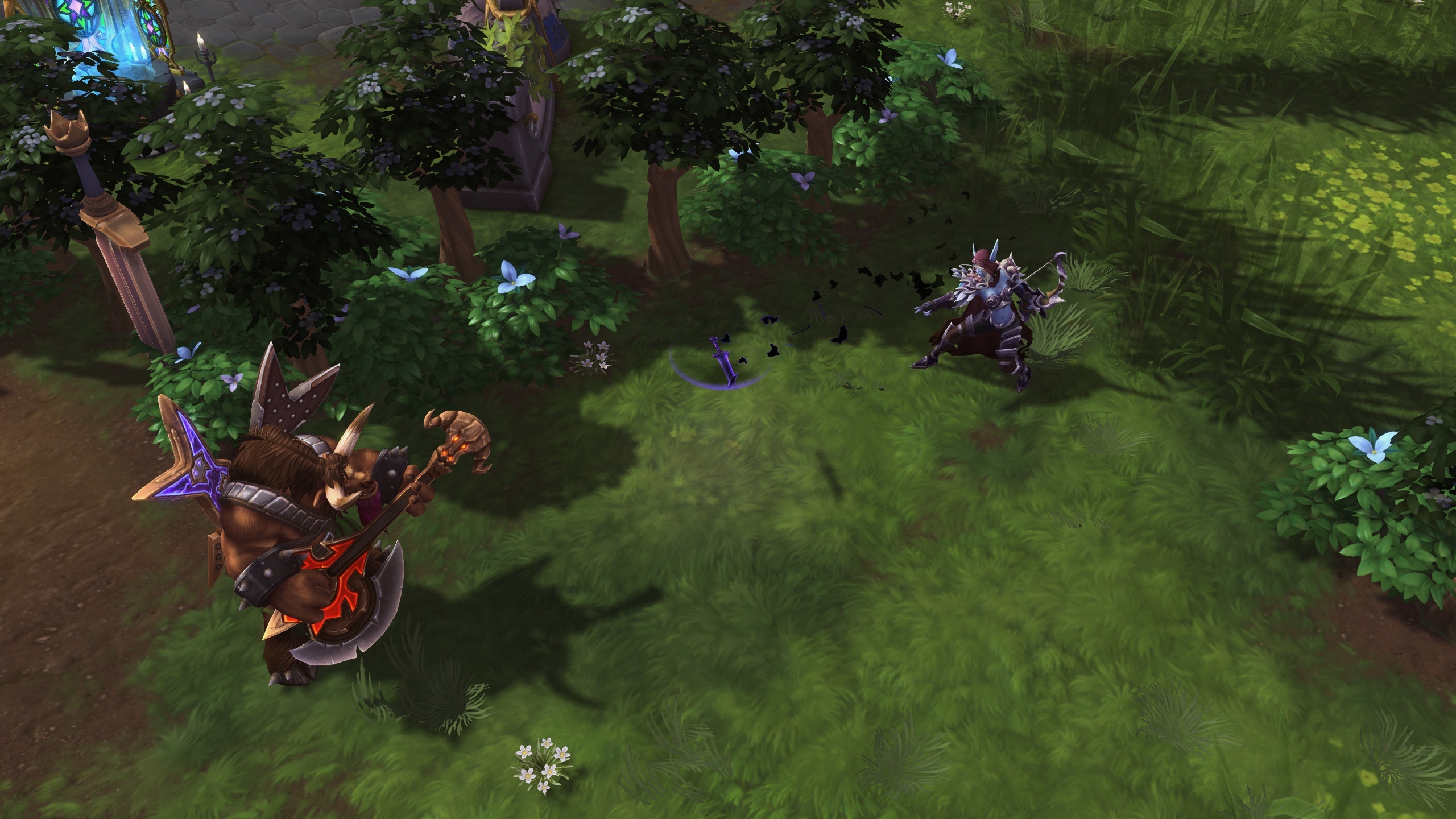 It’s sometimes hard to take Heroes of the Storm seriously. The game, which is currently in closed beta, does things like dress Abathur — the spidery Zerg Evolution Master from the Starcraft universe — in adorable onesies, and turn dwarven heroes into lollipop-wielding lords of confection. The games are short; 10- to 20-minute bursts of frenetic activity, at most, a paltry time span compared to the 40-minute average of a League of Legends or Dota 2 match. The growing stable of maps are also bright, outlandish, and populated by over-the-top narrators.

As for dying, that’s mostly an inconvenience measured in seconds.

Juxtaposed against heavyweight names like League of Legends and Dota 2, Heroes of the Storm can come across as a little rudimentary, perhaps even a tad shallow. Tonally, it’s most reminiscent of Ronimo Games’ Awesomenauts, a 2D sci-fi battle arena with the aesthetics of an ‘80s cartoon show. But that’s not a bad thing.

Dying is mostly an inconvenience

Heroes of the Storm straddles that knife edge between competitive sports and the "one more round" compulsiveness of simpler games, like Angry Birds. There is no earnest requirement for cat-like reflexes or encyclopedic knowledge of team synergies, although both are never bad to possess. No demand to memorize buy orders, or what item suits which character best in what situation. You don’t even need to learn how to deliver the killing blow. Heroes of the Storm jettisons many of the genre’s staples — gold and items being the obvious examples — in favor of a brisker, more arcade-y feel.

Which is also what makes Heroes of the Storm so interesting. In a congested landscape of clones, Blizzard’s upcoming title feels incredibly distinctive. Part of this can be attributed to the roster of playable characters. Every Blizzard aficionado in history has, at one point or another, wondered if Kerrigan could take on Diablo and how a dialogue between Raynor and Uther would resolve. Heroes of the Storm fulfills that curiosity and then some, reimagining inside jokes (Elite Tauren Chieftain is a real band comprised of Blizzard employees) and non-combat pets as battle-hardened combatants. It’s like fan service turned into a game. 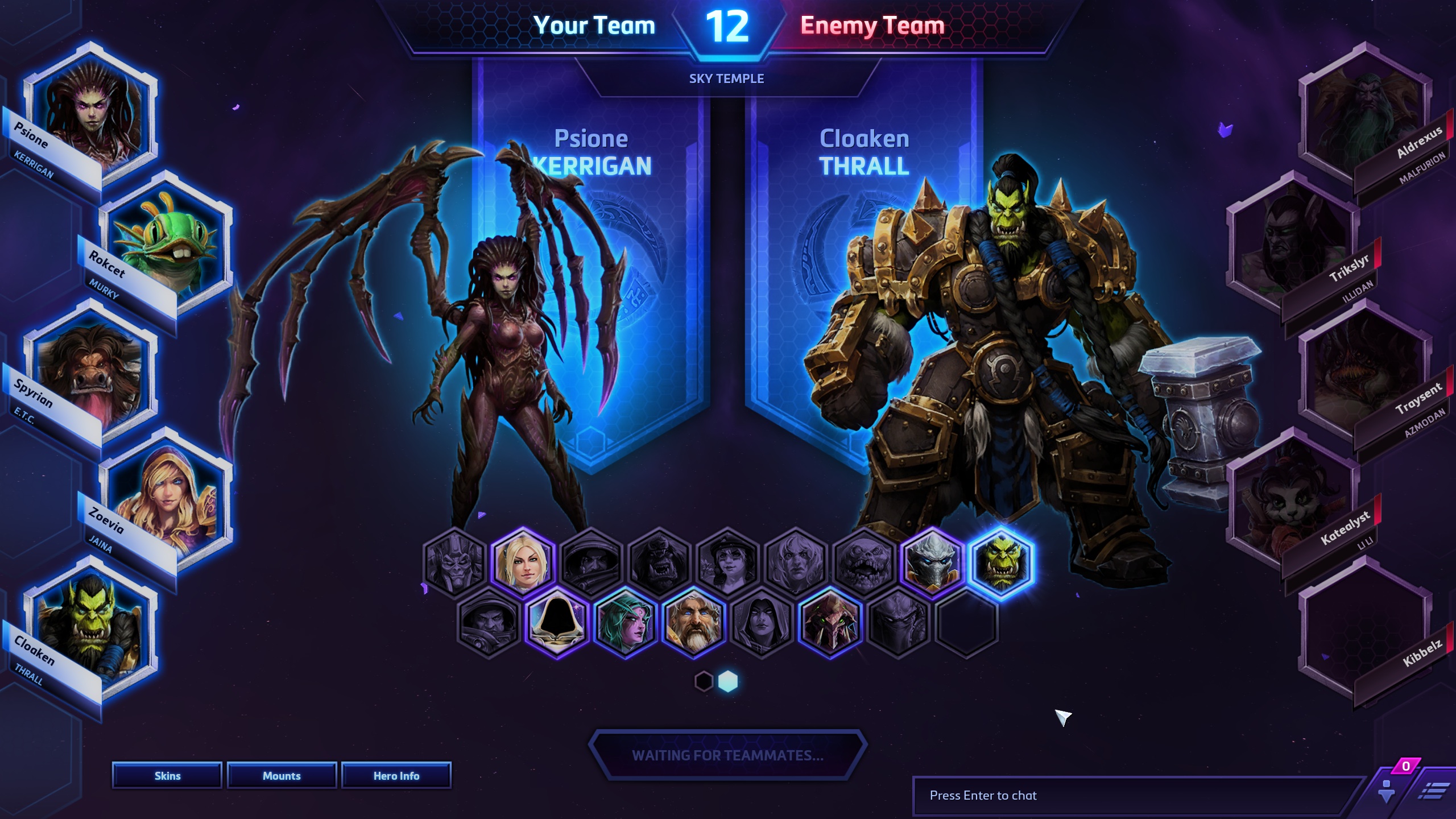 There is no thematic coherence to the cast either, which might initially come across as jarring if you’re used to the tenuous narratives that string together most of the genre. But this allows the developers the freedom to gleefully introduce ridiculous costumes, and characters that fall way outside of the standard RPG trifecta. (Abathur fights primarily by attaching symbiotes to his teammates while the Lost Vikings, who can be controlled manually, each have an attack corresponding to a different button.)

The other half of that equation is tethered to the game’s approachability: it plays like it’s meant to be fun right out of the box. Dota, and all of its derivatives, are complex beasts filled with esoteric systems. These are games intended to be learned over the course of months and years, rewarding diligence with incremental advances in skill. Great, if you’re willing to put in the time. Less so, if you’re leery of vitriolic communities or spending more than a thousand hours learning the ropes.

Even the greenest newbie can provide value to their team

Certainly, these intricacies exist in Heroes of the Storm, but there’s also a sense that such masteries are optional. You’ll undeniably benefit from committing the nuances to muscle memory, but even the greenest newbie can provide value to their team by breaking treasure chests and ferrying the contents to a ghost pirate. In that respect, Heroes of the Storm comes across as a curious hybrid of Dota and the old Warcraft III custom maps, the latter being unique playing fields that use assets from the main game. These varied from tower defense variations to role-playing games based on the iconic Final Fantasy series.

The inclusion of map objectives is a subtle way of keeping matches snappy. Cursed Hollow, for example, not only requires players to beat a path to the enemy’s stronghold but also to collect Tributes for the menacing Raven Lord. Gather three of these trinkets before your adversaries can, and their defenses will take a massive hit. Similarly, control over places of worship in the Sky Temple will cause laser beams to tear through your opponents’ fortresses, speeding their destruction. Consequently, it’s impossible to turtle — a notoriously ineffective strategy involving heavy defense with little to no offensive play — the way you might in a game of Dota 2 or League of Legends.

Heroes of the Storm differs from the competition in other areas as well. In-match gold and items have been replaced by talents, which can be selected on-the-fly to change your loadout. Many of these adjust how existing skills and attacks function, while others introduce new variations — panda girl Li Li can choose between an area-of-effect heal or a damage-dealing dragon, to give an idea. All of this lends wonderfully to the fast-paced tempo of the game. The only caveat? You need to earn access first.

Similar to League of Legends, Heroes of the Storm features a persistent leveling system of sorts where you can advance both the heroes you’ve purchased and your account itself. Leveling up the former allows you to unlock new tiers in their talent trees, amass gold, and even new cosmetic variations. Leveling up the latter grants you more general advantages: additional slots for daily quests, gold, and more free heroes to try.

All of this feeds elegantly into the cycle of covetousness that Blizzard has installed. You don’t have to finish the daily quests, nor do you have to level individual heroes. But if you do, you earn opportunities to experiment with new ideas, new characters, new looks, new ways to play the game. It’s a formula that Blizzard has been working on for years now — World of Warcraft and Hearthstone both boast similar systems — and it is being used to great effect here. 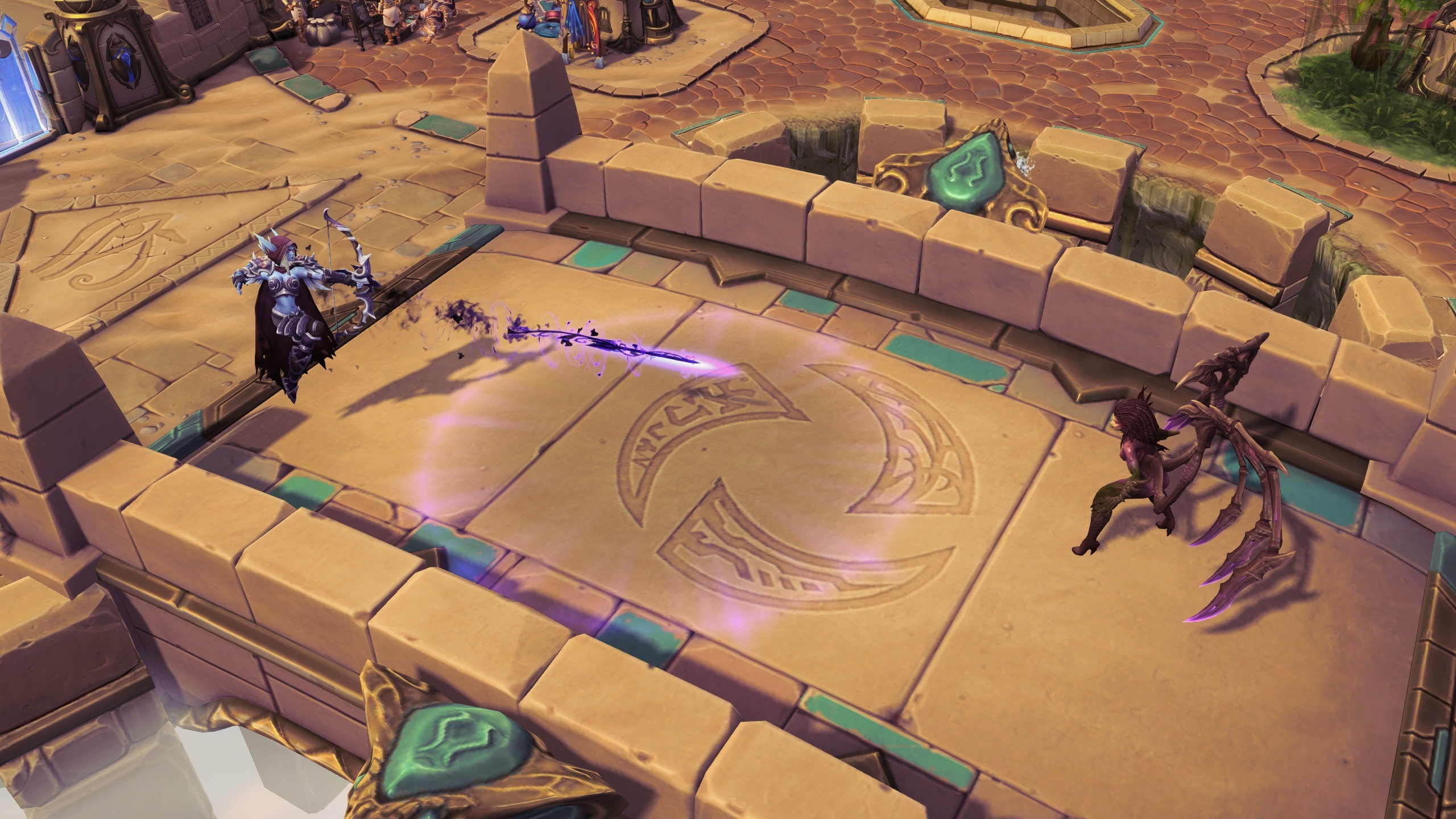 What’s even more intriguing is how the developers seem to be working to minimize what is the worst part of the genre: the toxicity of its communities. Anyone who has spent any time playing Dota 2, League of Legends, or any of the other variations that currently exist today, can probably attest to the snarling fury that subsumes these games. People get angry when they play. Extremely angry. Racial slurs, sexist insults, personal attacks, and threatening behavior all mix together in a noxious stew of pure hate.

This isn't a 'League of Legends' killer

Heroes of the Storm mitigates some of this by cutting off communications with the opposing team, reducing interactions to, at most, a last-minute "good game" at the end of the battle. The design choice parallels Blizzard’s controversial approach with the free-to-play card game Hearthstone, which completely eliminates conversation in favor of emotes, a decision many seemed happy to see. The limited dialogue between teams can help to reduce even intra-team griefing; it’s harder to lose your temper when you can almost pretend that the opposing side are just extremely clever AI characters.

There are other smaller touches, too. Kills are team-based affairs; Heroes of the Storm makes no distinction between who contributed damage and who dealt the final blow, preventing arguments about stolen glory. Likewise, multi-kill announcements are player-agnostic, declaring only a team’s achievements instead of one person’s skill. And while Hero League lets players carefully pick their perfect team composition, Quick Matches allow players the freedom to choose their heroes without external scrutiny, or anyone bullying them into decisions. The result is a game that enforces the notion that the team should overshadow personal vanity, a conceit often woefully missing from other similar games.

Heroes of the Storm isn’t a League of Legends killer, not even close. To be honest, I hesitate to even describe it as a gateway drug to the massively popular genre. Although Heroes of the Storm could serve as an excellent introduction, it feels like Blizzard might be trying to do something more than capitalize on a trend. Instead of a replica, it’s almost like the developer is trying to build a new entity over the same bones — the same way modern RPGs riff on their bygone predecessors, and how first-person shooters still carry Wolfenstein 3D in their genetics.

And that is definitely a good thing.

Heroes of the Storm is currently in closed beta, with a full release on Windows and Mac expected later this year. You can sign-up for the beta right here.