Looking for the perfect camouflage? Have you tried wearing squid stickers?

Looking for the perfect camouflage? Have you tried wearing squid stickers?

Squid are mysterious, underwater mimics. They can change their skin's patterns and colors to blend into their surroundings, hunt prey, and potentially communicate with other squid. For the past several years, researchers at UC Irvine have been trying to use these unique squid abilities to disguise soldiers on the battlefield. At a meeting of the American Chemical Society this week, Alon Gorodetsky of the school's Department of Chemical Engineering and Materials Science presented his team's latest research on harnessing the power of cephalopods for futuristic camouflage.

The core of the project is reflectin, a protein that squid and other cephalopods can use to manipulate light and color. In the lab, Gorodetsky's team can manufacture large quantities of reflectin in E. coli bacteria. "You could collect thousands and thousands of squid and extract the protein from them, but that might be animal cruelty on some level," he joked during a press conference. That reflectin gets painted onto an ordinary roll of tape, creating specific colors by varying how thickly it's applied.

"You could potentially shimmer."

By itself, that's not much better than existing camouflage. But once it's been painted on, changing the thickness will also change the color. Squid can do this by flexing to expand and contract small, reflectin-filled cells in their skin. Gorodetsky's team used a simpler version of this method: they stretched the tape to switch colors, then applied heat to pull it back into shape. With a lot more research, this could turn simple tape into versatile, flexible camouflage stickers. Soldiers would cover themselves in strips of reflectin, fine-tune it to a specific color or pattern, and be able to change it on the fly.

By itself, this isn't a new idea either. Cephalopods' shifting skin has unsurprisingly proved fascinating to researchers. MIT scientists, for example, created squid-inspired color- and texture-changing panels last year. But Gorodetsky says his team is specifically interested in the colors humans can't see. "Most people focus on the visible, we care about the infrared," he says. If they can create stickers that successfully reflect or obscure infrared light, the possibilities for camouflage are clear. A makeshift tape-suit might look almost transparent under normal light, but would shine under infrared — then, with a little stretch, the stickers would go dark. Just like traditional camouflage, this could break up the wearer's outline, letting them blend in with their surroundings. "If you have these stickers all over you and you're moving around, you could potentially shimmer," Gorodetsky says. "If you're in the forest, and everything's reflecting in the infrared, you'll be much, much harder to detect." 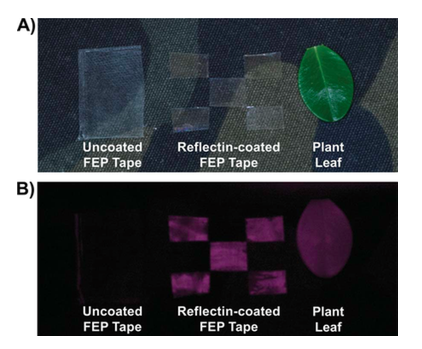 Fabric that can change how it reflects heat or light might also have applications outside the military. The Department of Energy's research wing recently awarded UC Irvine a grant to create "tunable thermoregulatory fabric," which could help the residents of a large building "harness their own individual radiant heat" and let the managers keep a consistent, more energy-efficient single temperature. In practice, it ends up sounding like hyper-advanced sweater technology, where people could adjust their temperature with clothing that changes how much it reflects or absorbs heat.

Right now, there's still a great deal of work to do. For one thing, stretching a whole uniform's worth of stickers into a consistent pattern isn't easy. "You'd really need each one of them to be integrated with some sort of stretching device or electrical trigger," he says. "Conceptually, given how modern electronics and networked control systems work, it's definitely feasible. The devil's in the details." Turning a single set of clothing into its own little network would drive up costs and defeat the whole purpose of the stickers — that they can be quickly configured, used, and thrown away when needed.

And there's another, more fundamental problem. In order to really thwart infrared cameras, the camouflage will have to hide body heat, something that Gorodetsky's latest strips can't do — they can only hit near-infrared wavelengths. He cautions against saying that his strips can defeat infrared cameras, at least right now. "These probably aren't bright enough to be game-changing applications yet," he said at the conference. "But it's a very, very nice demonstration of what you can do by drawing inspiration from these amazing animals."