Cancer: the Emperor of all Maladies is a thorough, touching look into the history and science of a family of diseases that most people consider unbeatable. Interviews with scientists, historians, and people battling disease bring the viewer into a world of scientific triumphs, and devastating failures — all of which are punctuated with colorful animations, and archival photographs that help Siddhartha Mukherjee's Pulitzer-winning book come alive.

We spoke with the documentary's director, Barak Goodman, about the making of the PBS documentary, which will air in three parts, starting Monday. The following is a lightly edited transcript of that conversation.

How much did you know about cancer before starting this documentary?

I knew very little. I knew what most people know, that it is a disease of unrestrained growth of cells, and I had the feeling that very little progress had been made in the fight against cancer, and that it was still nearly as deadly or as deadly a disease as it had been — all of which are wrong.

Cancer is "our Malevolent evil twin."

So it looks like your perception of cancer changed. How exactly did it change?

Well, in every way. First of all, I learned that it is many diseases, not one disease. It's a family of diseases, and not all are nearly as fearsome as the rest. There are many kinds of cancers that are now highly treatable, and many others that will be treatable and containable within the forceable future. So, in general I think it became much less scary than it had been.

I think, also, as I learned about the science of cancer — Sid talks about this in the book — [I realized that] it's really our malevolent evil twin. It's so much "us," and not "other." It's not a pathogen that comes from the outside. In a twisted way, cancer is a perfection of our own drive to survive and to live. That was a very big surprise to me. It explains why it's so difficult to treat. It's so close to who we are.

The final thing is about progress. Contrary to what I thought, there has been incredible progress made against cancer, especially in the last 10 years. That was a real surprise to me, and something that I hope we can get across to our viewers.

One of the big differences between the book and the documentary is the importance of contemporary cancer stories. Why did you decide to emphasize people's experiences with cancer in the 21st century?

Well, it's partly about the difference between television and books. What Sid has the ability to do in his book is write himself in and out of stories and take large digressions into other stories. A book allows you to do things that television, within the confines of time, doesn't allow you to do. On the other hand, what television can do that books don't do as well is press your face right against the glass of cancer.

I wanted to avail myself of the power of television, to put people right into these stories. We knew how challenging this would be, trying to interweave history, contemporary stories, and the science — nothing like this had ever been really tried before. And it really ended up working so much better than I imagined.

A big chunk of the documentary is spent telling stories about families battling cancer, and to do that, you had to follow them around for quite some time. How did that play out?

We made a decision right upfront that we wanted the film to invest heavily in contemporary cases studies, more so than in Sid's book. And we decided that rather than going around the country cherry-picking stories here and there, we would imbed ourselves in two hospitals and really become a part of the ecosystem of these hospitals, so that we could get very close to the doctors and nurses on the front line, and through them, to their patients. We thought that this was the only way that we would get close enough to get beyond the surface of these stories.

"our camera was like the IV pump next to them, and the machine in the corner. It was just another feature of their world there."

So, we got wonderful cooperation from two hospitals, Johns Hopkins in Baltimore and The Charleston Area Medical Center in West Virginia. We sent field producers down to live in those places, and to be in the hospital hallways every single day. And that really paid off hugely. When we did meet families, those families knew that the doctors and nurses approved of us, that we had been there for a long time, and it just made everyone much more comfortable with the whole thing, and I think you see that with the final product.

You see how intimate these stories are, how close we got to our subjects, and how unguarded they are in front of the camera. And that's because our camera was like the IV pump next to them, and the machine in the corner. It was just another feature of their world there. 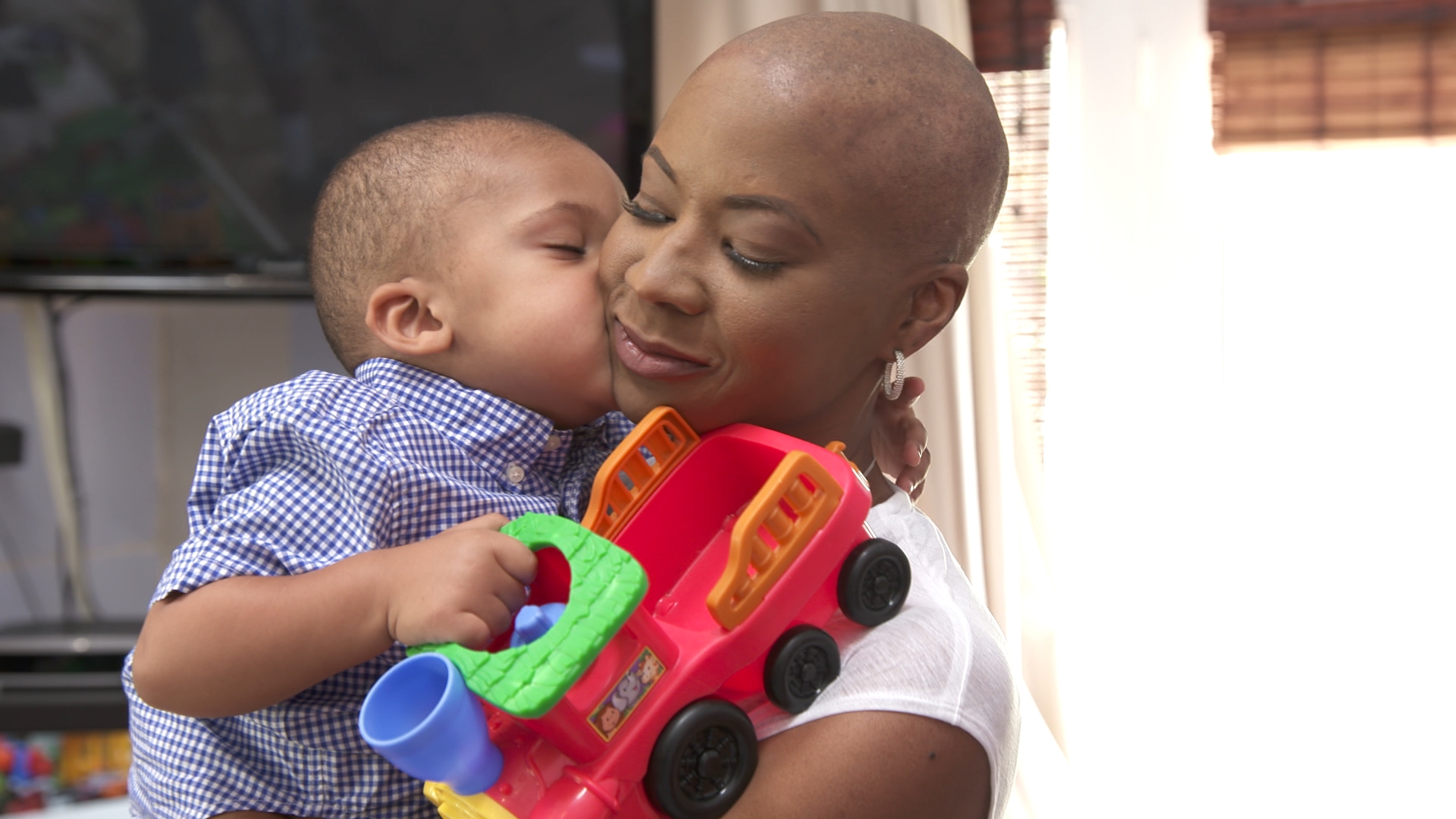 Did you encounter any problems with families saying, "hey we don't want to participate anymore?"

Inevitably. There is always that moment where the sort of initial rush of it has worn off, and sometimes it happens when things in their lives aren't going well. That presents a dilemma for us as filmmakers because we want to respect the wishes of our subjects. On the other hand, sometimes these things pass very quickly. So, it requires a lot of tact.

There was precisely one moment — the story of Lucas, the boy we were following who gets very sick — where we struggled with whether or not to follow him as he got sicker and sicker. We discussed the possibility of him dying and [whether we] would be there. Ultimately, we decided that wasn't a line that we wanted to cross. I had seen other films that had those kinds of scenes, and I always found them incredibly distasteful and over the line. And, you know, we knew that the family was uncomfortable at that point, but we didn't even need to know that. We ourselves were uncomfortable intruding on those kinds of moments. So, we took it to a point where we saw Lucas when he was seriously ill, but we did not film any of the last several months of his life, when he got sicker and sicker. That was a very conscious choice on our part.

"We discussed the possibility of him dying and [whether we] would be there."

In the first episode, the documentary recounts the first time researchers realized that you could use a chemical to treat cancer. The treatment was used in a three-year-old boy with Leukemia, and you got the boy's twin brother, Elliott, to talk about that experience. How do you make that story as vivid as possible?

Well, fortunately he made it quite vivid. The fact that he could remember with such clarity events that happened so long ago... I guess it's evidence of how scalding they were. So the first thing is just to use Elliot's own memories, which were so powerful.

But then we brought in every other technique. We had wonderful archival [materials] of the young [scientist] Robert Sandler, and then we availed ourselves of certain animation techniques. We created a sort of whimsical animation to capture their childlike view of their childhood in Dorchester, Massachusetts. Then we kind of turned that on its head, when Elliot describes the corridors where his brother laid ill. Instead of the colorful whimsy of the first part, you have this cold black and white, with these ghostly images of the hallway, of parents and of doctors.

"The basic research dollars have to come from the Federal government and they're not."

That was very consciously the before and after of a child getting sick. And then we turned to animation again to show [the boy's] death. We used every tool in the tool shed.

What do you hope viewers will get from this documentary?

I hope that they will get exactly what I got in making it. First of all, a more nuanced understanding of what these diseases really are. And how the word isn't as terrifying anymore. It may be as terrifying, but it shouldn't be. Something like 60 percent of newly diagnosed cases will be "cured" or "contained," and people will live a normal live. That's a pretty encouraging statistic, and it's getting better every year. So first and foremost hope is what we hope will happen.

And secondly, we hope that the film will help to galvanize a national conversation about cancer, so that the federal government, which has cut funding for basic research in the last few years, will restore it. Because until the last few years there was a bipartisan consensus that basic research for cancer should be funded fully. And that has stopped for the first time as we've gotten involved in these budget wars in Washington.

It's really so tragic because it is the moment in time right now when we need funding for basic research. We are right on the cusp of many breakthroughs, and what we need is just to get over the hump, and that requires the partnership of the federal government. No one else will do it. Pharmaceutical companies won't do it. Private philanthropy tends to focus on results, so they tend to focus on therapies. The basic research dollars have to come from the Federal government, and they're not. So we hope that this will help people get on their politicians and correct that problem.