Pulling past the guard booth of Sony Pictures Studios in Los Angeles, I had the strange, recurring sensation that I first had nine days earlier: I felt sorry for Justin Bieber. The reason I was here on a sunny Saturday afternoon in March was the taping of the Comedy Central roast of the 21-year-old singer and multi-multi-millionaire, but I didn’t feel sorry for him because I was going to spend the next several hours watching him being brutally teased, mocked, and insulted. I felt sorry for him because I wasn’t sure he had any friends.

For years, the targets of the Comedy Central’s roasts have tended to be celebrities past their prime (Roseanne Barr, Pamela Anderson, William Shatner) or show biz adjacent oddities (Flavor Flav, Donald Trump). But last year, the network somehow convinced James Franco to be the center of this bizarre ritual’s cruel attention. Most of the roasters — like Jonah Hill, Bill Hader, and Aziz Ansari — have connections to Franco or are considered his peers, and the roast master was Seth Rogen, his pal and frequent costar. By contrast, the list of participants for Bieber’s immolation, which had been announced a little over a week earlier, just seemed off.

Bieber has become something of a toxic asset

Chris D'Elia is Bieber's favorite comedian, so I guess his involvement made sense (though Chris D'Elia being your favorite comedian, not so much), and Ludacris contributed the guest verse to Bieber's sticky sweet breakout hit "Baby," which means that the two of them will both have to reckon with its legacy in the afterlife, but beyond that pair, there was no discernable reason guiding the lineup. Standup Jeff Ross was there, because as many of the other participants noted that night, Comedy Central roasts are all that the 12-time veteran is known for these days. The hired assassins for the evening were two comedians who largely made their name working alternative rooms: Natasha Leggero, who has cultivated a persona of an effortlessly cruel party girl, and Hannibal Buress, whose comedic style is more likely to be compared to cerebral spaceman Mitch Hedberg than Don Rickles. (Not coincidentally, both Leggero and Buress have new series coming soon to Comedy Central.)

The others filling out the dais may have been chosen by Comedy Central talent bookers playing a game of free association: Justin Bieber likes basketball, so get Shaquille O'Neal; Shaquille O'Neal is a tall black man, so get Snoop Dogg; Snoop Dogg has been arrested, so get Martha Stewart. As for roast master Kevin Hart, it's not unfair to assume he probably just picked the hosting gig that aired closest to the release date of Get Hard.

It's no surprise that contemporaries like Drake or Miley Cyrus or Lil Wayne, who all could probably deliver the digs and take the hits required of them, didn't get involved. The reality is that despite the millions of devoted fans that Bieber still has, he's become something of a toxic asset. In the three years since Bieber turned 18, he has yet to release an album, but here are some of his greatest hits: adopting a monkey named Mally and then leaving him at a German zoo; pissing in a bucket and yelling, "Fuck Bill Clinton" at a picture of Bill Clinton; egging the home of his Calabasas neighbor and causing tens of thousands of dollars in damages; smoking so much weed with his formerly estranged dad on a private plane that the pilots had to put on oxygen masks; being punched by Orlando Bloom at a club in Ibiza; getting arrested for a DUI after racing his yellow Lamborghini in Miami.

Now that Bieber has confessed, the roast would be his public penance

After this rough stretch (for him, for humanity), he began 2015 on an apology tour, first releasing a video in January on his Facebook page after an awkward appearance on The Ellen DeGeneres Show to say he wasn’t proud of how he acted in the recent past, telling his laptop’s camera, “I’m not who I was pretending to be” and “I want to make the best impression on people and be kind and loving and soft.” The next week he went back on The Ellen Degeneres Show to further explain the feelings he expressed in the video. Now that he's confessed, the Comedy Central roast would be his public penance, a place to take his lashes and then hopefully move on. 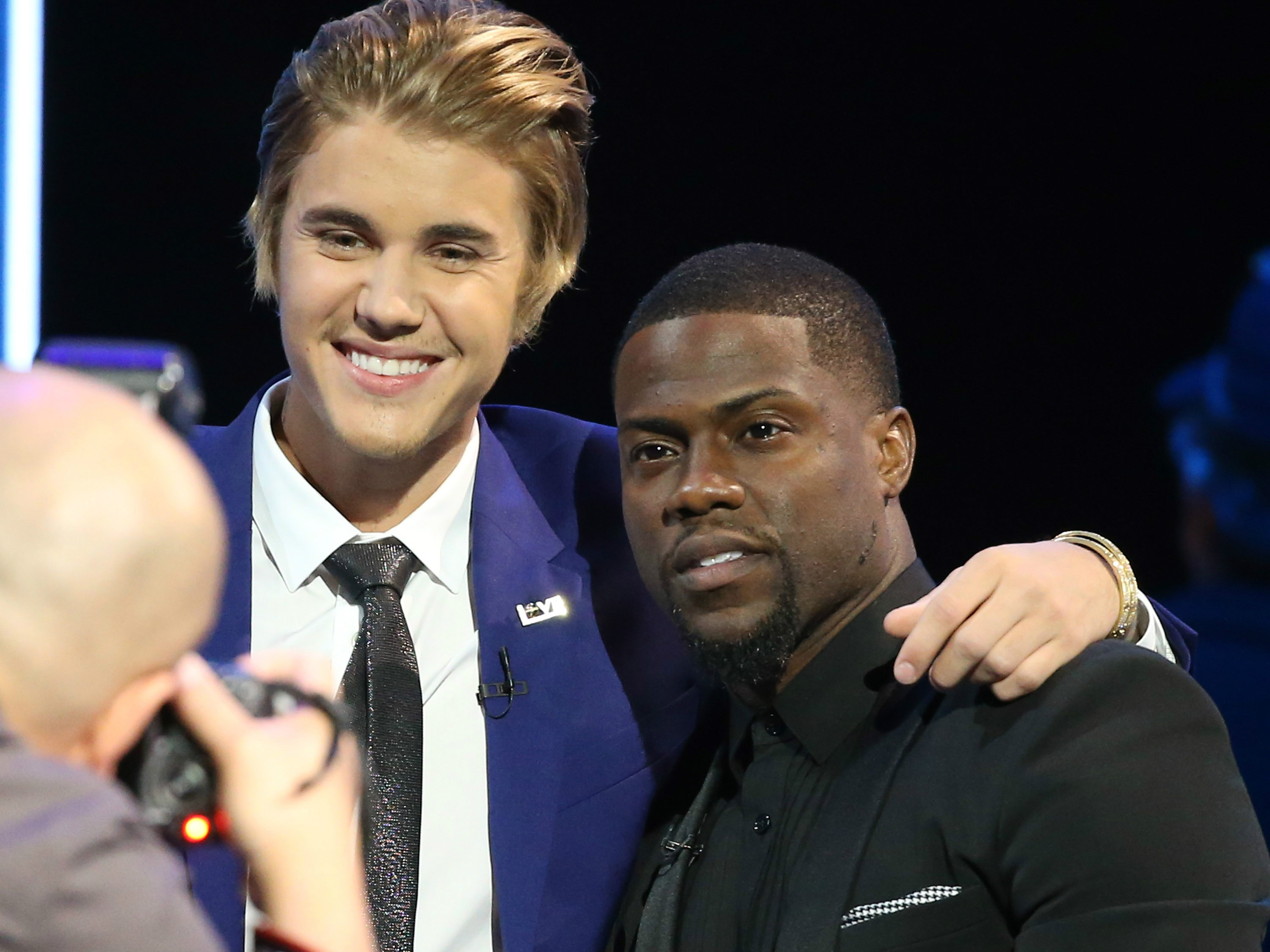 The roast was filmed at a soundstage on the Sony lot, and the press watched from a makeshift tent inside another soundstage, where two flat screens showed a live feed of the proceedings. Before the taping began, my neighbor for the night wondered, "Do you think he's going to cry? He seems like a little bitch boy."

Hart introduced the roast as "possibly the beginning and the end of Justin Bieber," and after the star eventually arrived on stage in a royal blue suit and with an imitation of a mustache, Hart asked him, "Why would you do this? This is like suicide." Later, D'Elia, the seemingly closest person to Bieber involved, told him what many people watching must have been thinking, "No one likes you bro, we're just here to help our careers."

"No one likes you bro, we're just here to help our careers."

Any possibility that Hart would turn down the famous raunchiness of celebrity roasts in deference to Bieber's young fan base ended quickly when he made the first joke I'm aware of about titty-fucking Martha Stewart. In fact, it only took Hart three jokes until he got to one about Bieber and sucking dick. According to my unofficial scorecard, over the course of the night there were 15 jokes about Bieber being gay, transgender, or a hermaphrodite. In comparison, there were 13 about him wanting to be black, five about his abandoned monkey, three about his relationship with Selena Gomez, and three involving his fans or his longtime manager Scooter Braun being pedophiles. There were no jokes about his recent Calvin Klein ad that was supposedly Photoshopped to make it look like there was a bigger bulge in his underwear, but apparently with these things, the roastee is allowed to make some topics off limits, and maybe that was one of them.

The most popular subject of the night actually was how short Kevin Hart is, with at least 25 jokes referencing it. There were also six jokes about how big O'Neal's penis is. Pete Davidson started off his set by managing to combine these two tropes, telling the crowd, "It's an honor to be at a roast hosted by Shaq's dick." 21-year-old Saturday Night Live freshman Pete Davidson's lead-off set was a bit of a revelation. Though he's showed promise on SNL, on this night he was vicious and willing to make use of his own darkest moments. Davidson, who is the son of a New York firefighter who died on September 11th, addressed Hart and Snoop Dogg, telling them, "Soul Plane was the worst experience of my life involving a plane."

Unexpectedly, some of the most inventive jokes were about how bad Snoop looks these days:

For his part, Snoop spent much of the night openly getting high on stage next to Martha Stewart. 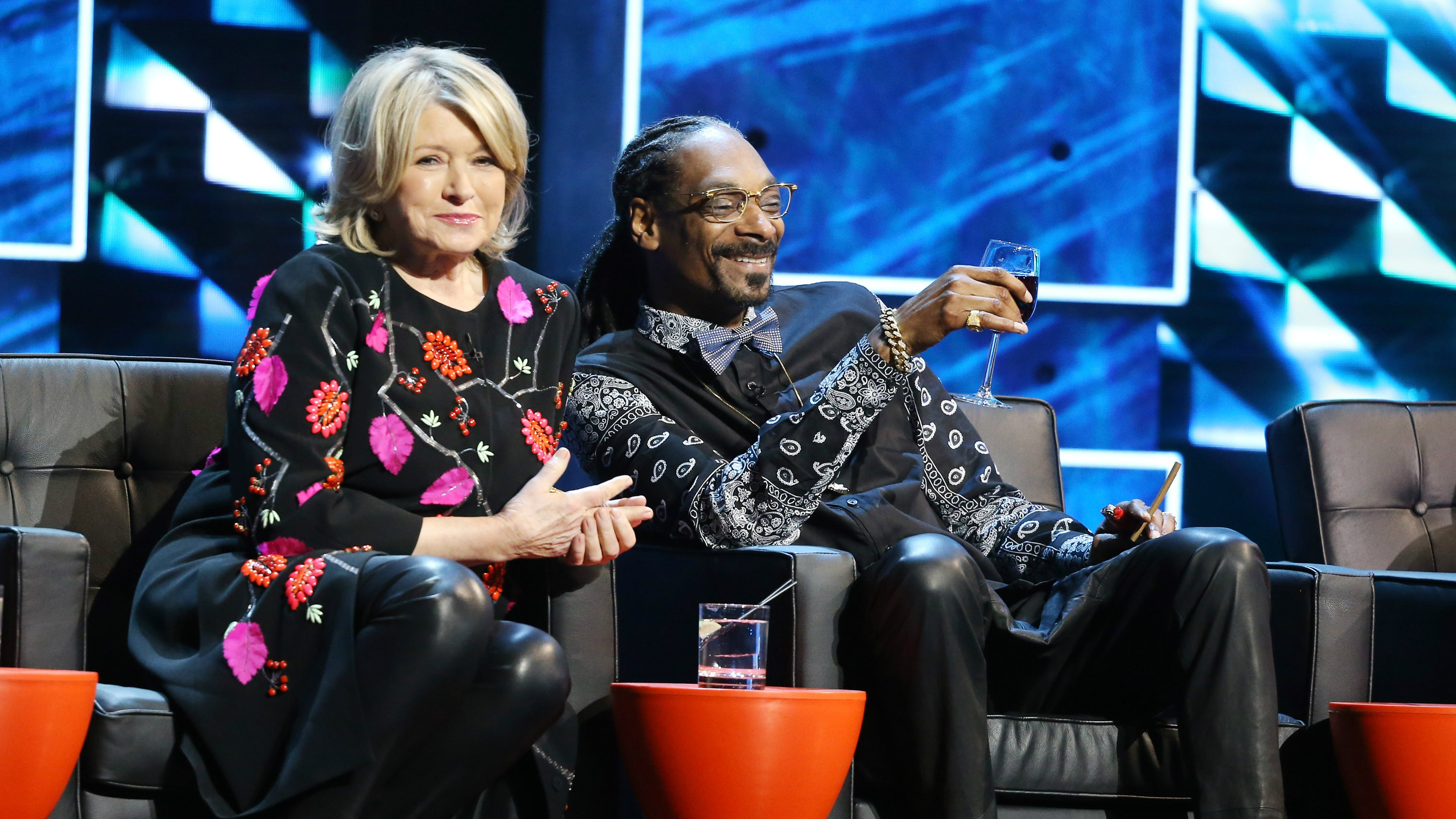 As the evening went on, talk in the press tent turned to what lines probably wouldn't make it to broadcast. Leggero's line about how Bieber learned to dance by dodging the coat hanger while in his 17-year-old mother's womb was a contender, as was Ross's crack, "If Anne Frank heard your music she'd have Übered to Auschwitz." The Monday after the taping, Comedy Central announced that it wouldn't be airing the few Paul Walker jokes that were made, none of which were as good as Ross' response when his one about the late actor bombed: "Too soon? Too fast? Too furious?"

Midway through the night, Will Ferrell (again, not coincidentally Hart's costar in Get Hard) made an unannounced appearance in character as Ron Burgundy, working the angle that Bieber's bad behavior should be commended, not condemned. "This kid has spunk, moxy, and few other STDS," he said. But the biggest surprise of the evening might have been Dave Chappelle's presence in the audience, considering that the network that put the whole shebang together is the one whose $50 million he famously walked away from. I'll try not to read too much into that fact and just assume that like the rest of us, Chappelle wanted to hear jokes about Bieber being a little shit.

Like us, Dave Chappelle just wanted to hear jokes about Justin Bieber being a little shit

For the most of taping, Bieber seemed to be enduring and often enjoying the abuse he was taking. As the custom goes, he took the last turn at the podium to get his revenge, asking, "What do you get when you make $200 million? A bunch of has-beens calling you a lesbian for two hours." Of course, by the time he got to take his shots at the roasters, concepts like Jeff Ross not being famous or Ludacris not using birth control were already well-tread.

At the end of his time, Bieber abruptly switched tone and solemnly asked for forgiveness. It was so boring, such a departure from the tone of event, and so nakedly self-serving that I didn't bother transcribing it. Maybe listening to hours of jokes about Brazilian prostitutes and Martha Stewart's racism will turn your heart cold.

Afterwards there was a short press conference with some of the night's participants. The comedians praised Bieber for being willing to do what he went through. "Here's a guy I would never know, never really understand, never really respect, but now I've grown to like him, because he's fucking cool," said Jeff Ross. Still he could barely remember the words to any of Bieber's songs.

When Bieber took the microphone, at first he remained in his sincere mode, saying, "This was a moment for me to show people where I am at in my life right now. Right now I'm in a moment of change. As I said, I've done a lot of things I'm not proud of, but we're turning a new leaf here." Later when he was asked how Comedy Central approached him to do the roast, he nailed a legitimate impromptu zinger, "I actually approached them years ago, but they said I didn't have enough material."

As they were leaving the tent, I heard Ross asking Bieber if he was really about to get on his jet and head to Vegas as he'd told the press. Bieber said he was, and asked if he wanted to come along. Ross said he'd love to, but there was something else he had to do.