Samsung is back atop the Android throne with its new Galaxy S6. The hotly contested title for Android’s best was more open than ever last year, with credible contenders from Sony, Motorola, and HTC, but 2015 is starting out with Samsung clearly in the ascendancy. And the Korean company is doing it with not one, but two phones: the Galaxy S6 and Galaxy S6 Edge. The two share a nigh-identical spec sheet, a new (for Samsung) metal frame construction, and an all-glass back and front. However, they are definitely not the same. The Edge’s screen wraps around its sides, giving it an instantly recognizable, futuristic look and the potential to do a few things that flat-screened phones just can’t match.

For the comprehensive account of how and why Samsung’s new phones are the best that Android has to offer today, make sure to read our full Galaxy S6 review. I spent the past week getting to grips with the Galaxy S6 Edge as my primary phone and can now recount the specific quirks of using it and what they might tell us about the direction in which smartphone design is headed. 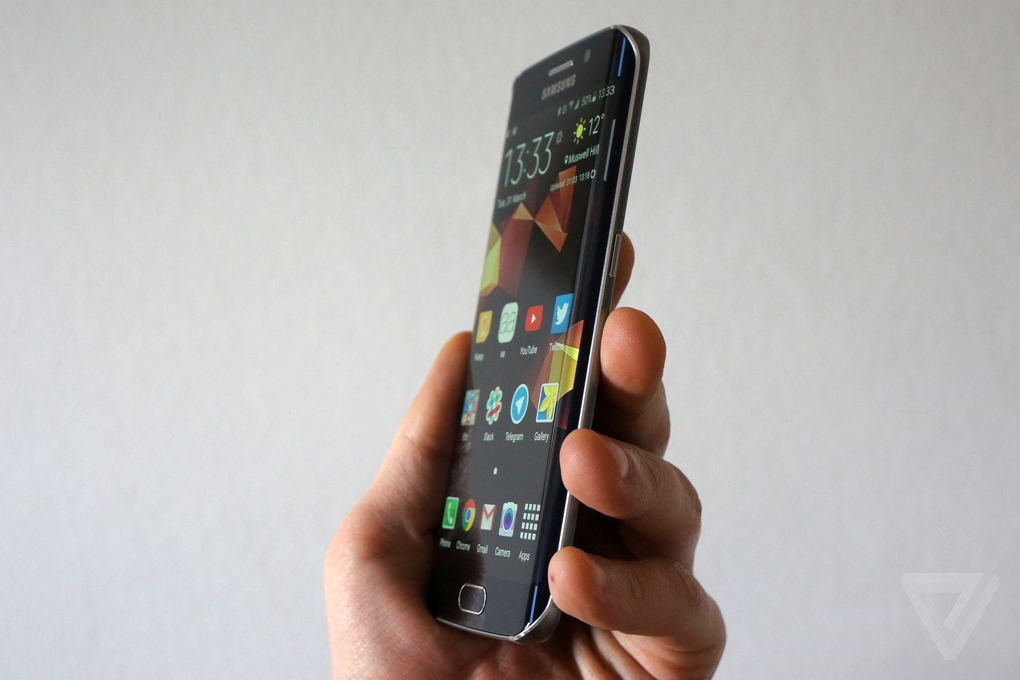 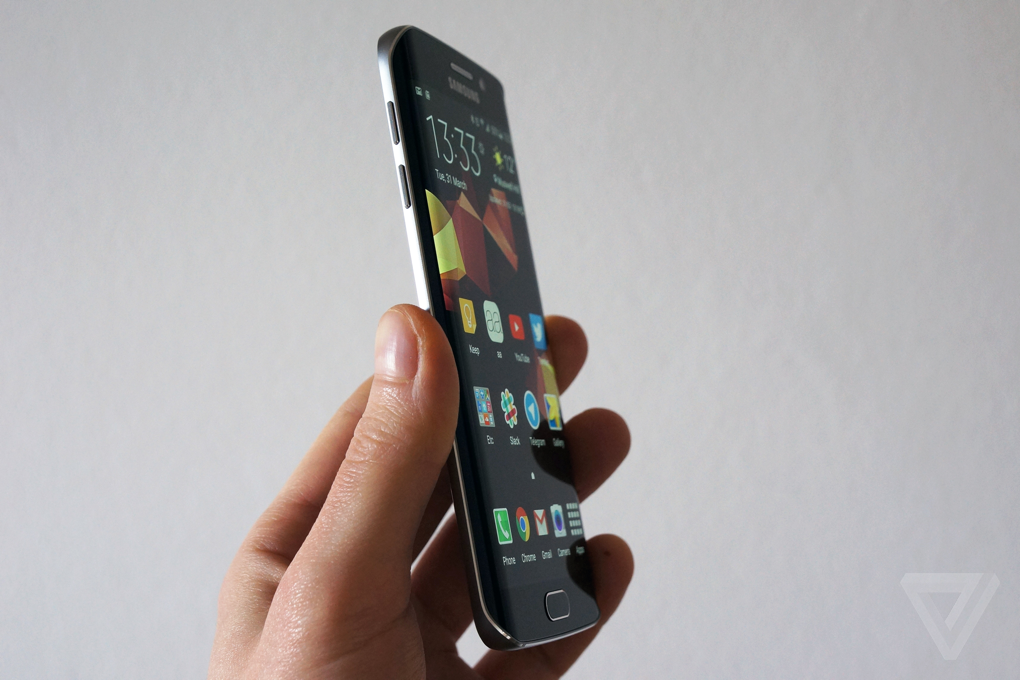 My first contact with the Galaxy S6 Edge came on March 1st, during its official unveiling at Mobile World Congress in Barcelona. Immediately following Samsung’s presentation, I took an S6 Edge into my hands and my first impression was unequivocally damning: the curve is on the wrong side! Every instinct I have tells me to turn the rounded front to my palm and the flat back to my face — because nearly every smartphone to date has been thus designed. Even before smartphones, feature phones were colloquially known as soapbars because they all adhered to the concavity of the human palm.

Samsung sacrifices ergonomics at the altar of sci-fi aesthetics

No, this phone isn’t about ergonomics. The appearance of the Galaxy S6 Edge is its raison d'être. This is a pure expression of form over function, which Samsung can get away with because it already offers the regular Galaxy S6 for the less adventurous among us. Those who wish to go on a wild ride into the screen-bending future, that’s who the S6 Edge is for.

Like LG’s G Flex 2, which has a different sort of curved screen, the S6 Edge is designed to immediately stand out. I don’t have to explain the appeal of this thing to anyone: it’s obviously different and in a way that makes it alluring rather than merely alien. With the Galaxy S6 Edge, I’m collecting compliments about my phone’s stylishness and quirky techno-futuristic looks. Compare that to the typical experience of using the latest Android phone, which is usually characterized by subtle and incremental internal improvements.

I’ll never forget trying to justify my excitement about the LG G3 to a friend who’d seen it all before: high-res screens, fast performance, good camera, etc. By contrast, the S6 Edge exudes an air of advanced technology without needing to speak of it. It looks rather like the future we’re conditioned to expect, one where regular shapes start to transmogrify into weirder, typically curvier forms.

I am not, however, convinced that the S6 Edge is the future. Despite my best intentions and great excitement, I have not been able to shake the initial impression that the Edge is ergonomically busted. In my time using the handset, I’ve consistently pressed on-screen buttons with my holding hand — because the metal sides are so thin they are almost nonexistent — and found myself growing anxious about holding it just the right way. Yes, it’s very much like the iPhone 4 Antennagate debacle, though unlike that hardware issue, there’s a software fix that Samsung could perform to rectify things: just make the side screens insensitive to touch input when the display is on.

The Galaxy S6 Edge also doesn’t play too nicely with Google’s Material Design. Samsung has my eternal appreciation for following Google’s lead in moving to a cleaner, more minimalist interface, but Material Design emphasizes flatness and geometric regularity, which the Edge’s warping side screens disturb. They create a sort of vignette effect on white pages and are a hindrance rather than a help when editing photos.

Material Design consistently places navigation buttons in the top left corner of the screen, which are actually harder to press on the Edge because they sit just on the brink of its curving left edge. Where you usually have a flat landing pad for your thumb, there’s now a convex shape. Small items around the periphery of the screen are, as a result of the S6 Edge’s curves, harder to hit intentionally and easier to activate unintentionally. Some users might prefer the rolling edge for swiping gestures, however I’m not among them. I find edge-swipes harder because the actual edge is further away.

The above tradeoffs would be worth it if Samsung had lived up to its promise of unique functionality in the S6 Edge, but that’s the one part of the company’s 2015 overhaul that’s unfortunately close to its old gimmicky ways. You can color-code your favorite contacts so that your sister can be orange, your best friend green, and your doctor red, which then illuminates the phone’s sides in the appropriate hue when you receive a call from them. This effect is best experienced when you have the phone lying upside down, which is ironically when you’re least likely to want to be disturbed, whether by color or noise.

If there's any utility to the edge screens, Samsung hasn't yet figured it out

Samsung provides the option to add a clock and a quick notification checker to either of the side screens, but the gesture to activate that function is odd, rarely works on the first attempt, and takes too long anyway (when compared to just turning on the phone briefly). I know of no sane human who’d want an RSS reader on the side of his or her phone. Convex screens are harder to read than flat ones, which is why TV manufacturers went crazy with the Flatscreen branding as soon as they could move away from the traditional bulbous tube.

In sum, the grand total of functional improvements resulting from Samsung’s doubly-curved screen is nearly zero. When the Galaxy Note Edge was introduced last year, Samsung talked up the idea of cleaning up clutter on the display by devolving things like camera controls to the side screens, but it’s done none of that with the S6 Edge, which is very simply a Galaxy S6 with a less conventional display.

That doesn’t mean the S6 Edge is completely without merit. Its downsides, while tangible, are not deal breakers, and even as a compromised version of the best Android phone, it’s still among the very best in its class. The camera, the performance, the ridiculously detailed display, and the perfectly rigid and solid construction of the regular S6 are all present and accounted for with the Edge variant.

A solution to the ultimate first world problem: boredom

I wouldn’t pay an extra 100 bucks just to have a unique-looking phone, but I know many people who would. The S6 Edge represents a strain of smartphone design — certainly not its overall or mainstream direction — that is growing in importance and recognition. It’s the same impetus that drives companies like Nokia (now Microsoft’s mobile division) and HTC to issue multiple colors of each new smartphone and to always try to stand out with their looks.

Phones are no longer mere functional implements that condense and consolidate utility into a portable package. They’re now expressions of style and personality, a chance to assert a little bit of uniqueness in a globalized world that’s growing increasingly homogenized. Sure, boredom with the typical black slab is a first-world problem, but then again, isn’t that what premium smartphones are for solving anyway? The S6 Edge is a concentrated, exaggerated expression of the techno-vanity of modern phones. It exists because we want it, even if we don’t need it.