Suicide rate among young men has gone down, but the rate for young women is rising

Suicide rate among young men has gone down, but the rate for young women is rising

17 percent of US high school students have considered suicide

Young men between the ages of 10 and 24 are taking their own lives less often than they did 20 years ago, according to a report released by the CDC today. Unfortunately, the suicide rate among young women is slightly higher than it was in 1994. And young people in general are resorting to suicide by suffocation more often than they did two decades ago. 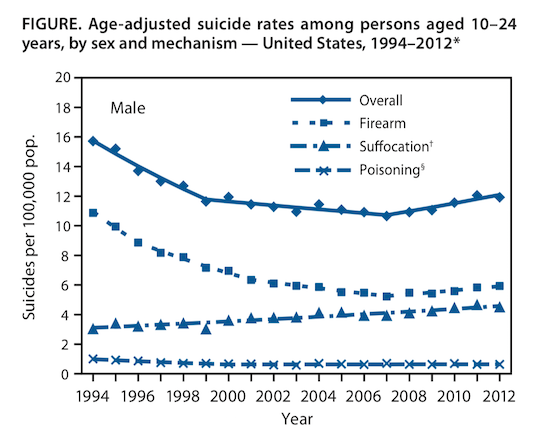 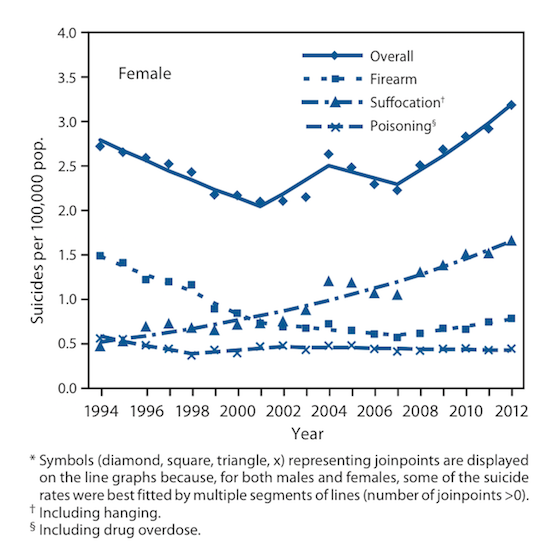 The fact that suffocations are on the rise is concerning because that method is very efficient, the CDC authors write. On average suffocation kills between 69 and 84 percent of people who use it. Suicides by firearm, on the other hand, are about 81 percent successful, whereas poisonings are only successful in about 2 percent of cases, according to data from 2010.

The reasons for an increase in suicides by suffocation are unclear

The reasons for an increase in suicides by suffocation are unclear, the CDC researchers write. More research is needed to look into perceptions of suicide by hanging among teens and young adults. In the meantime, the CDC recommends that clinicians, hotline staff, and various other interventionists pay attention to "current trends in suffocation suicides." Doing so may help them educate families and assess risk when talking to young people who might be considering suicide.

Here are some suicide warning signs, and treatment options. If you or someone you know is considering suicide, please call the National Suicide Prevention Lifeline 1-800-273-8255. Calling is free and the lifeline is staffed around the clock.

Feed refreshed Sep 25 • Not just you

Apple Music’s set to sponsor the Halftime Show next February, and it’s starting out strong with a performance from Rihanna. I honestly can’t remember which company sponsored the Halftime Show before Pepsi, so it’ll be nice to see how Apple handles the show for Super Bowl LVII.

The Elon Musk-owned satellite internet service, which covers all seven continents including Antarctica, has now made over 1 million user terminals. Musk has big plans for the service, which he hopes to expand to cruise ships, planes, and even school buses.

Musk recently said he’ll sidestep sanctions to activate the service in Iran, where the government put restrictions on communications due to mass protests. He followed through on his promise to bring Starlink to Ukraine at the start of Russia’s invasion, so we’ll have to wait and see if he manages to bring the service to Iran as well.

Must Reads
Must Reads
E
Emma RothSep 25
We might not get another Apple event this year.