Hands-on with the new 12-inch MacBook with Retina Display

The Mac has bucked the trend of declining PC sales for quite awhile now, and Apple is showing no signs of slowing down in the category. While questions swirl about the future of the iPad, Apple's oldest business is going strong and showing clear signs of innovation. There's no better example than the latest Macbook, just announced today at Apple's "Spring Forward" event. It's a MacBook (just "MacBook") with a Retina Display, a laptop many have been clamoring for, but more importantly it's a vision into the future of what laptops can and should be: untethered from power cables, devices whose battery life just lasts and lasts.

The new MacBook is just ridiculously thin and so light I literally didn't believe it when I picked it up. It's 13.1mm thick and weighs just two pounds, but since it's distributed over the full 12 inches of the laptop, it feels even lighter (especially when it's open). I'm very sad to see the SD card slot go, but I won't be sad to have a laptop that lasts this long and weighs this little.

To make it that thin, Apple had to make some adjustments, starting with the keyboard. It takes a little getting used to, since it doesn't really feel like any standard MacBook keyboard I've used. Although Apple says that it has created an all new butterfly mechanism to make typing feel great, the keys felt fairly stiff to me, with such little travel that I wasn't sure if I was really typing. It's as close to typing on a glass tablet screen as you'll get with physical keys, and you have to rely on autocorrect just as much when you're going really fast. I imagine I could get used to it with just a little bit of time, though. 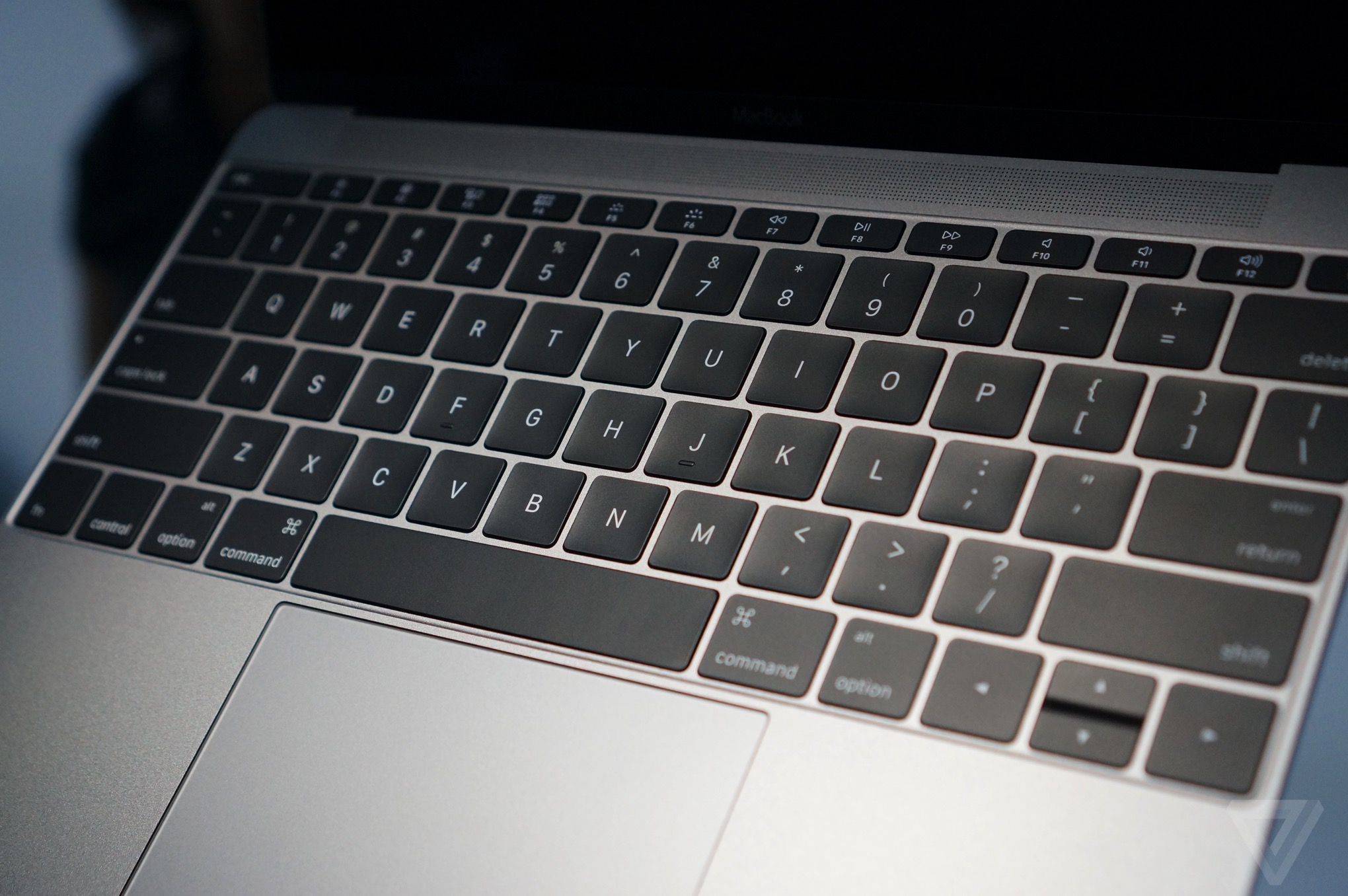 The new trackpad is accurate, and kind of wild: it doesn't actually move or click, but the haptic feedback works so well it feels like you're clicking. It's great. On the other hand, the Force Click action is very far from intuitive — at least for me. (Nilay thinks it's way more intuitive.) It's like a second click past the first; you press down hard and keep pressing through the click, as though you were karate chopping with your finger and trying to hit a target behind the trackpad. Do that, and you'll feel a subtle second click happen, and ta-da! you've activated force click. In apps that support force, like QuickTime, there are actually multiple clicks — the harder you hold down the trackpad on the fast forward or rewind buttons, the faster the video scrubs. It's interesting, but it's out of character for the company that famously refused to put more than one button on the mouse. Putting an extra interaction like this on the trackpad seems weird.

I went back for a second go-round with Force Click and while I do believe I could eventually get it, it's going to take a while. One of the demos has you fast-forwarding through a video at variable speeds depending on how hard you're pressing down. It took a lot of very nuanced control not just to jump straight through to 60x, but after a minute or so, I was able to step through the speeds. As an update: I've spoken to a handful of people here in the room and they all tell me I'm crazy and it's amazing, so maybe I need to try it again with different sensitivity settings.

The MacBook comes in three colors, and I fully expected to hate the gold option. But in person, I don't. Of the three, though, my favorite is the Space Gray option — I've been wanting that on a MacBook for a while now. All of them look ridiculously thin.

As for performance, we'll need to do a lot more testing to give it a real judgement. But after a few minutes, at least in these controlled circumstances, I'm impressed. The laptop was able to move pixels around on this beautiful Retina display without any noticeable lag in scrolling. Also the fans never came on — because there aren't any. It's a 2304 x 1440 screen and also insanely thin, with the black bezel I've been waiting for on a laptop this thin since I first saw it on a MacBook Pro.

Force click is far from intuitive for me, but everybody else loves it

Although we've all been waiting for higher resolution and higher-quality screens to finally come to Apple's thinnest MacBook, the screen actually isn't the most important part of this new MacBook. No, instead it's the small port on the side, a USB Type-C port that serves as the power jack, a do-anything USB port, a display port, and essentially anything else you could imagine using a cable for.

Although it's not as trip-resistant as Apple's traditional MagSafe power adapter, the new port is well worth the tradeoff. For one, the battery life on this new MacBook means that you won't need to have it plugged in as often in the first place. For another, this plug is the future: it's the one-plug-for-everything fantasy that has hovered over the entire computer industry since serial and parallel ports spawned on the back of personal computers 30 years ago. It's always been an impossible dream, but we finally have a jack that might actually pull it off — and one that have more than just Apple backing it.

For now, though, it means carrying around an awkward mess of adapter cables. But if the tide goes the way I hope it will, the uptake on this new universal charging / syncing / connecting USB port will be faster than usual, and those adapters will be a short term solution.

The new MacBook will be available starting April 10th. The 256GB base model will cost $1,299, and an upgraded model with more storage (512GB) and faster processor can be purchased for $1,599.

More from this stream Apple Watch and new MacBook announcement: all the news from Apple’s ‘Spring Forward’ event