An Attack on Titan game is coming to the Nintendo 3DS

An Attack on Titan game is coming to the Nintendo 3DS

Get ready to fight huge, people-hungry giants on your handheld — a video game adaptation of manga Attack on Titan is headed to the Nintendo 3DS this May. Called Attack on Titan: Humanity in Chains, the new game is headed to both North America and Europe. The third-person action game will feature both a single-player campaign where you fight off towering giants, and a co-op mode for up to four players. And for those with the New Nintendo 3DS XL, it will support the new C-stick for camera control. 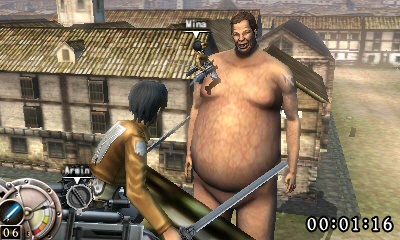 The game is actually a localized version of an adaptation already available in Japan, subtitled The Last Wings of Mankind, which originally launched in 2013. Publishing duties for the Western release are being handled by Atlus, the same company behind cult favorite Japanese games like the Persona and Etrian Odyssey series.

Attack on Titan tells the story of the few surviving remnants of humanity, who live in heavily fortified cities in order to defend against near-invincible giants who really seem to enjoy eating people. The manga has been adapted into multiple formats, include an anime series and an upcoming live-action movie, due to launch in Japan this summer. To get people up to date with the series, Nintendo is making the first two episodes of the anime completely free in its eShop digital store.