The iPhone revolutionized video games, opening up the medium to a whole new audience of designers and players. But it's not clear if the Apple Watch will have anywhere near the same impact. Apple hasn't made gaming a big part of the smartwatch's impending release, and mobile developers seem wary of the device's limited capabilities — so far we've primarily seen games that pair with your iPhone, letting you get in some quick gameplay on your watch, while your phone does all the heavy lifting. But a new studio is looking to change that, with an ambitious new release slated for later this month: it's a fantasy role-playing game played entirely on your wrist. 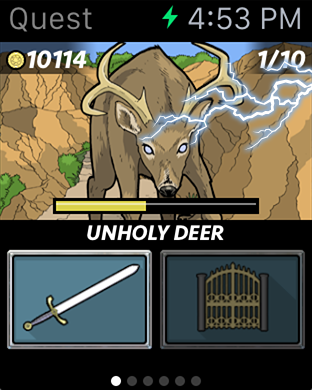 Called Runeblade, the game is a fairly typical RPG that has you venturing into a fantasy realm to ward off an impending evil. You level up your character, collect new magic spells and gear, and fight enemy creatures like dragons and unholy deer. It will be available as a free download, though it's not clear yet how the developers plan to monetize the experience. Runeblade's simple, cartoony graphics may not look that impressive, but what the game is actually trying to do is pretty ambitious. Whereas most RPGs require a huge time investment, with play sessions that can last for hours, Runeblade developer Everywear Games is aiming for what it calls "Twitter-sized entertainment." In other words, a video game that you can play in bursts of 10-15 seconds.

Everywear bills itself as "the world's first wearable games studio," and the Finnish company includes former employees from developers like Rovio and Alan Wake creator Remedy. Runeblade will be the studio's first release, and it's exclusive to the Apple Watch. When most people think of gaming on their watch, they probably think of much smaller experiences; games like Threes or Dots seem ideal to play on your wrist. But Everywear decided to go with an RPG so that players will have a reason to keep coming back. "Easy pick-up-and-play design is critical, of course, and we've dramatically simplified core gameplay," says studio CEO and co-founder Aki Järvilehto. "But there's still a depth and complexity that builds over time as you unlock spells and powers later in the game."

While games haven't yet been a big part of the burgeoning smartwatch trend, Järvilehto believes that will change, and that the Apple Watch will mirror the iPhone in some ways. "If you look at the dynamics of similar platforms, it's always been games and entertainment that make us feel passionate about these devices," he says. "As consumers, games like Angry Birds and Clash of Clans have been a significant part of our relationships with tablets and mobile. We want to have a similar impact on smartwatches."

Unlike the few Apple Watch games we've seen already, Runeblade will run natively on the device, so you won't need an iPhone to play. And while Apple's new device isn't the first smartwatch, Järvilehto says that Runeblade will be an Apple Watch exclusive for now because it lets the new studio stay focused on one platform. "Our first objective is to perfect the wearable gaming experience," he says. "And that starts with focus. In the games industry, doing one thing very well is always superior to doing many things fairly well."

Runeblade is expected to launch some time in April; the Apple Watch will be on sale starting April 24th.