We went shopping for an Apple Watch in Tokyo, Paris, and London

Apple's latest gadget goes on show around the world

The Apple Watch is available to order today, and while you could try your luck on Apple’s website the way you’d buy an iPhone, this is a different kind of product altogether. You wear it. It has to look good on you. You probably won’t want to buy one without seeing it in person. And it might not take off at all if people don’t think it’s cool.

So, Apple’s retail strategy for the Watch is a little different to other products. You can check it out in Apple’s own stores, of course, but the company is experimenting with other partners as well — places that never would have sold Apple products before. And the first phase of this occurred today, with pop-up Watch shops opening in major department stores in three fashion-forward cities: Tokyo, Paris, and London.

We were at all three. Here’s what we saw. 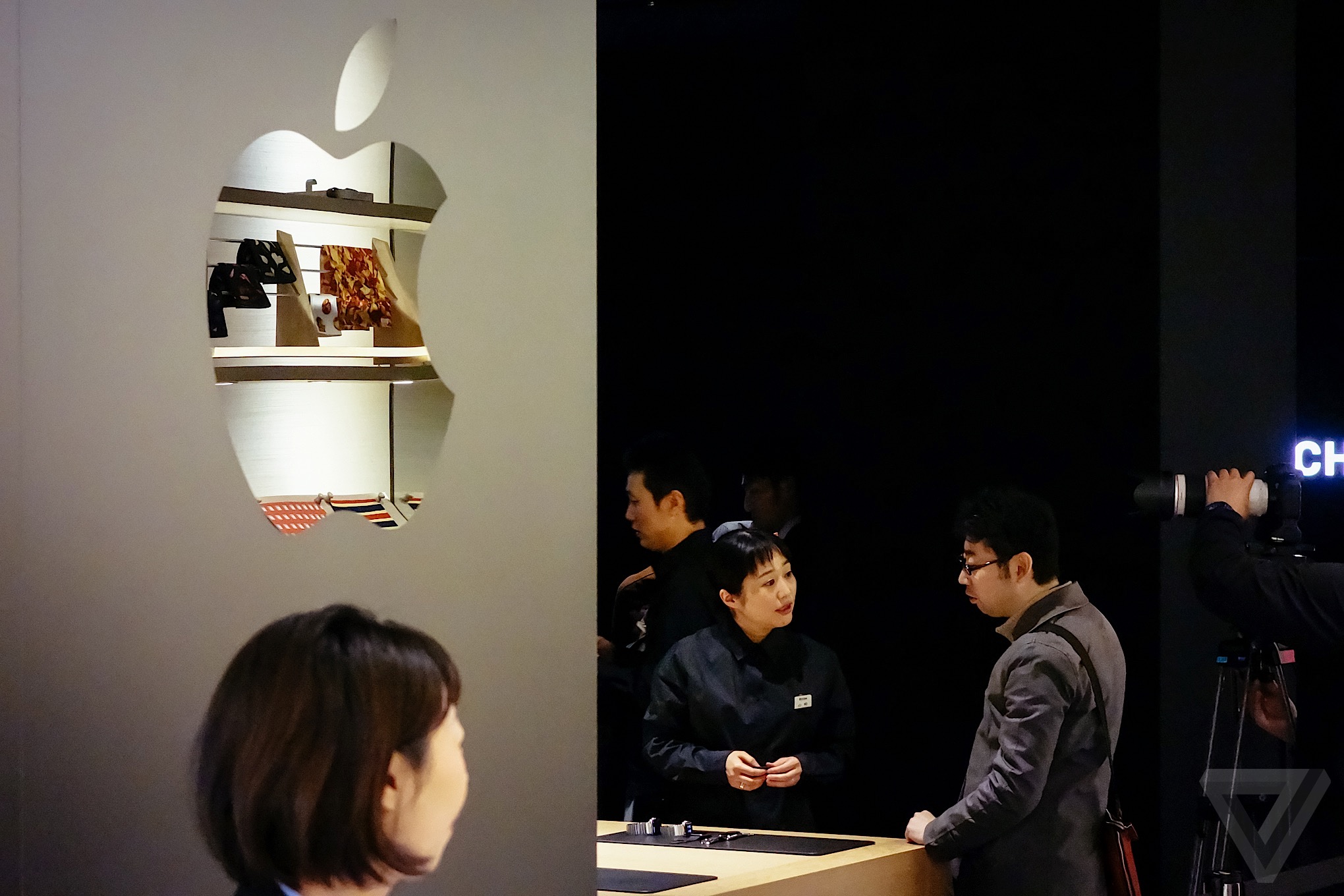 As I approached Isetan, a huge department store in the bustling business district of Shinjuku, I thought I saw a big line of people. When I got there, I found out that at least half of them were reporters and photographers, so I ended up in line behind only about 15 actual customers. That line quickly grew, though, and at 10:30AM we were shuffled inside and guided to a dark stairwell.

There, two lines formed: one for those who wanted to make an appointment to try the Watch on, and one for those who just wanted to see it in the store. This confused exactly everyone. When it became apparent that all the appointments had already been filled up until late afternoon, and soon not even then, several frustrated customers moved to the other line just so they could get a glimpse of the Watch within the hour.

The shop is nothing if not imposing

The Watch shop itself is a black void amid an otherwise well-lit department store. The neighboring, modestly shiny Cartier storefront looks like the glitziest place in the world by comparison. Glowing profile photos of the Watch adorn the walls, and the only other falls on the windowed table set up with examples of each model and band. The shop is nothing if not imposing. I've never ordered a $17,000 watch before, but I don't think this is a typical setting in which to do so.

The crowd was, as you’d expect, a little different to Isetan’s usual demographic. There were a lot of curious Apple fans, of course, and attendance was mostly male. But as I was ushered into the shop to see the Watch myself for the first time, I wound up next to a bubbly Japanese woman in expensive-looking clothes peering at the rose gold Edition and telling staff that she’d buy one when she could. If Apple can bring a few more people like that into these stores, the experiment will have been more than worthwhile.

I didn't really know what to expect this morning when I biked over to Galeries Lafayette, an upscale, tourist-drenched department store in central Paris. I figured the scene wouldn't be quite as frenzied as one of Apple's first-day-of-iPhone-sales extravaganzas, since there wouldn't be a footrace to actually buy anything, but I woke up early just to be safe. As it turns out, I didn't really need to.

I arrived at the store around 8:15 AM, 45 minutes before the doors were to open. Red velvet ropes and metal barriers had been placed in front of one of the entrances, around which a group of employees were hanging out, dressed in all-black and staring at handheld devices. There were two people standing in line, both of them 20-something males. The first was a Chinese engineering student who lives in Germany, the second a tall, lanky Belgian software developer named Gaïtano. Both spent Thursday night in front of the building.

"I had like, half-an-hour sleep, in this chair," said Gaïtano, 23, pointing to a folding chair leaned against the wall. "And he spent the night in a sleeping bag."

Like others I spoke with, the two men had already decided that they were going to purchase an Apple Watch, but Gaïtano hadn't decided on a model. Apart from them and the Apple employees who had flown in for the event, most appeared to be locals or vacationers who were there to try out the device for themselves. An older German man I later spoke with said he purchased one for his 14-year-old son as soon as preorders opened this morning; a young Chinese couple behind me in line had already decided on buying the Sport, Apple's cheapest model.

The entire area was patrolled by security guards in bright orange vests, though they didn't have much of a crowd to deal with. Perhaps 40 people had amassed outside by the time the doors opened, at which point the Apple employees ushered us inside and up an escalator to the second level. There, we were greeted with pep rally cheers and high-fives from a slew of employees, who were lined up in front of Apple's slice of the store. The welcome seemed a bit disproportionate, but I obliged with a high five or three.

Galeries Lafayette is enormous, and it's very expensive. The central part of the store is a series of circular floors that look down on an open space full of luxury bags and perfumes. Hovering above it all is an ornate stained glass dome. It's the kind of place that attracts the rich and the haut couture fashionable, which is the demographic Apple seems to be targeting. But much like its September preview event at the store Colette, a mecca of all things hipster-chic, the people who gathered this morning weren't exactly fashionistas. The clientele was predominantly male, and it was at times difficult to differentiate journalists from customers.

Apple reaffirmed decisions that were already made

Apple's slice of real estate was comparatively small, with four sections of long wooden tables — much like what you'd find in any typical Apple Store, save for the Chanel and Dior stands that bordered it. The watches were displayed under glass along the wooden tables, with some working models available for people to try out. Each section was organized by watch model and divided by tall, Apple Watch-branded barriers. (The final section was devoted to iPhones.) Other watches are stored in the tables' RFID-controlled drawers, but the high-end Edition models were kept in an undisclosed location elsewhere in the store. An Apple employee who helped me try one on cited security reasons for the separation.

Once the initial wave of excitement subsided, things settled into a more normal retail experience. If it weren't for the luxury goods and art deco architecture surrounding it, the carpeted space could've easily been part of any other Apple Store — full of clean edges and white paint. It's hard to say whether the Paris event was a "success." It certainly wasn't as chaotic as I expected, and no one I spoke with said the preview had convinced them to buy a smartwatch. Instead, it seems like Apple just reaffirmed decisions that its most loyal customers had already made. As I was leaving, I saw Gaïtano trying on an Edition. He looked at me and flashed a wide smile. 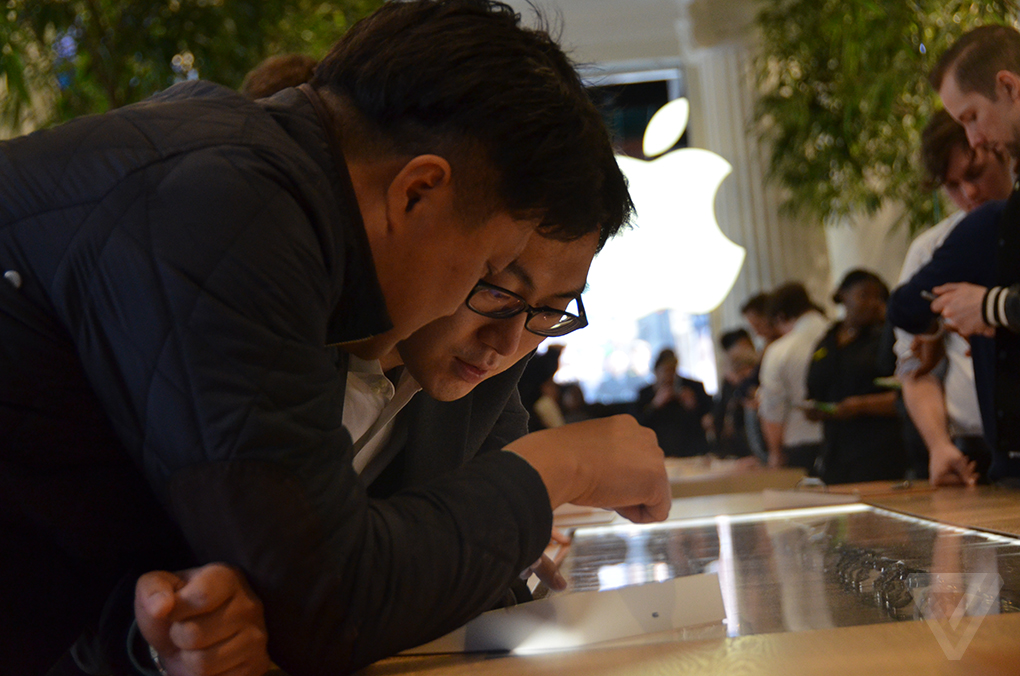 I arrived at Selfridges in London at 8:30AM. I don’t usually shop here because I simply can’t afford $3,000 leather jackets or watches that cost more than my house, but today I’m here to try on a $17,000 Apple Watch Edition. Outside were burly security guards blocking the entrance until 9AM, and just myself until a few others started arriving to form a line. I got in early with the large amount of media attendees. Selfridges is hosting its special Apple Watch preview in the the luxury Wonder Room, and Apple’s latest gadget is rubbing shoulders with Cartier, Rolex, Tag Heuer, and a host of other luxury brands. The Apple Watch Edition thinks it belongs here.

It took a long time to get the Watch Edition on my wrist. I was the first person to actually try one on, so there was security, PR, and employees scrambling to get the sacred Watch Edition for me while I live-streamed the whole thing on Periscope. It arrived with a security guard, naturally, and in a special box designed to make it as luxurious as the price tag. I tried both the 42mm and 38mm versions, and I have to say neither felt like a luxury timepiece, they just felt like gold versions of the Apple Watch. Yes the box is special, and the finish is gold, but I actually preferred the look of the stainless steel version — it does all the same things. The Apple Watch Edition just doesn’t feel all that different, unique, or premium. I joked about running away with the $17,000 42mm version, and the security guard simply smiled away and watched me head to the door. Good job I’m not a real thief otherwise I’d be in the back of a London taxi typing up my eBay auction right now.

The whole experience didn’t feel as luxury as I was expecting. It felt just like any other Apple product at a store. While a Selfridges employee did note that the leather they’re using on the pads and places to sit is the same used on Rolls Royce cars, I wouldn’t have noticed otherwise. There was no special section for the Watch Edition, and just one giant table with all the different options under glass.

If anything, the experience felt confusing. I wasn’t sure if you had to book to try one on, or speak to someone. It was just a free for all, but the staff were very helpful either way. Perhaps the most striking part is that I couldn’t even use the Apple Watch Edition on my wrist. You have to use the demo units on the counter if you actually want to know how it all works, so it’s really a gamble if you buy one. If I visited any other store to purchase a $17,000 watch I would be be able to inspect its features fully, and it would have been a much more intimate and careful process. This isn’t any other watch though, it’s the Apple Watch, and I’m sure those who will actually spend $17,000 on the Watch Edition won’t care about trying it on.

A passer-by looks at an Apple Watch on display in an Isetan window.
Most Popular
From our sponsor
Advertiser Content From