Is the third time the charm for Microsoft's tablet?

What is a laptop? What is a tablet? For most people, the answers are obvious. But for Microsoft’s Surface line, it’s been a bit murky.

Microsoft’s first attempt, the Surface RT, flopped. So much so that the company had to take a $900 million hit when it failed to sell them all. Microsoft’s second stab at tablets resulted in the Surface 2 with a sleeker design and better performance. It still wasn’t easy to use on the lap, and the lack of a full Windows OS meant it was never really a laptop and never really a tablet due to a lack of touch-friendly apps.

While mistakes have been made along the way, there’s always been something charming and unique about the Surface and the fact that it’s not just an iPad clone. It’s never quite nailed what Microsoft was looking for, but there’s always been promise there, hiding underneath that kickstand.

So now we have a third attempt, the Surface 3. It’s Microsoft learning from all of its mistakes and bringing lessons from the bigger Surface Pro 3 down to a smaller and cheaper $499 tablet. Because it finally uses a full version of Windows, you can now run all the full Windows apps you’d expect to use like Chrome, iTunes, and Photoshop. But is that enough? Is the third time the charm for Microsoft’s tablet / laptop hybrid? 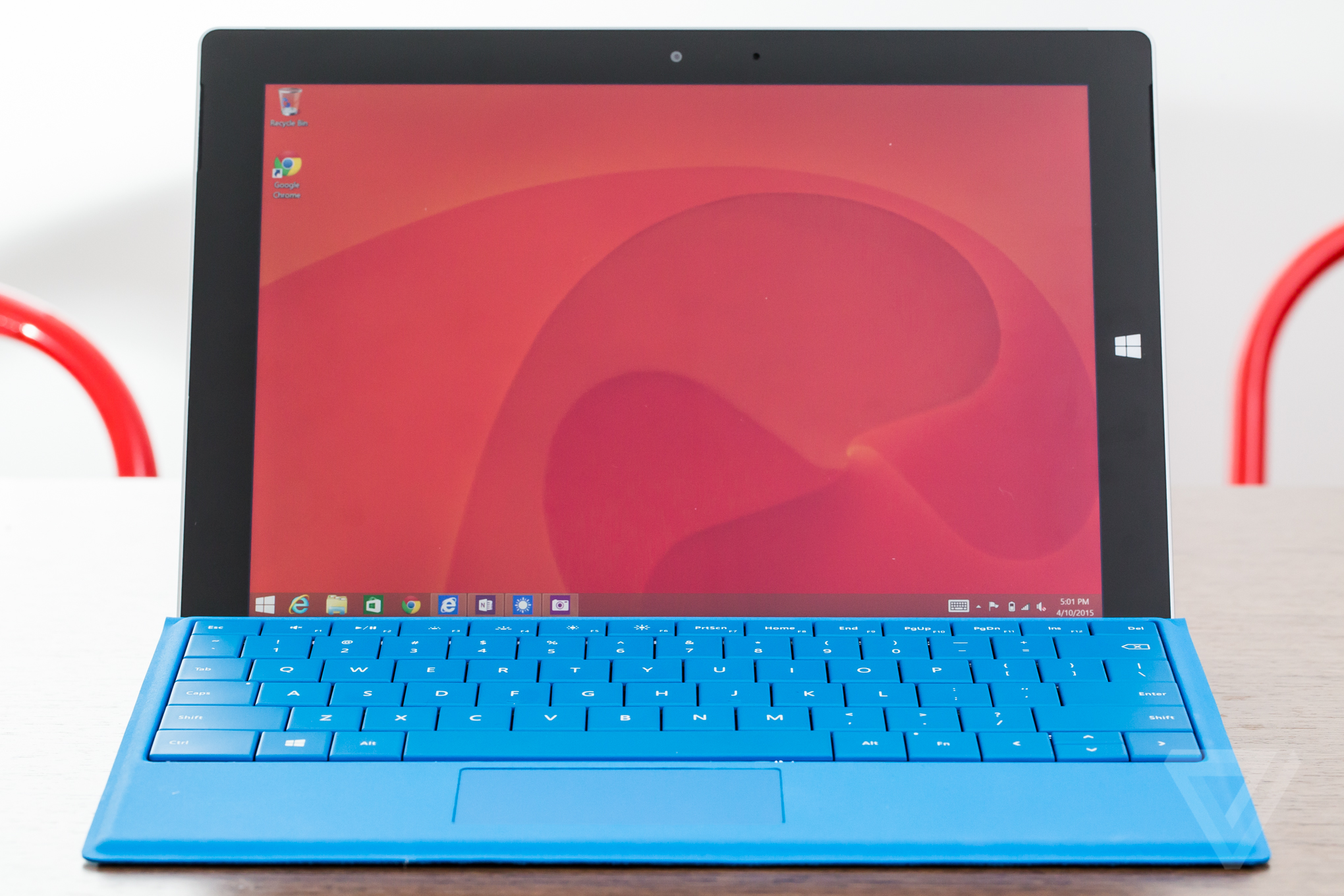 When I first looked at the Surface 3, I honestly thought it was a Surface 2 from a year and a half ago. With the same silver matte aluminum finish, it still looks beautiful, modern, and premium. Dig a little deeper and you find some subtle — but important — changes. The Surface 3 is both thinner (8.7mm) and lighter (1.37 pounds) than its predecessor, and the dimensions have changed to make this more of a tablet than ever before. There’s now a 10.8-inch display running at 1920 x 1280, which is slightly larger than the Surface 2, and a 3:2 aspect ratio finally makes it a lot more comfortable to use in portrait mode as a pure tablet. The display is bright and crisp and has great viewing angles. Surprisingly, I find the color reproduction is actually better than the Surface Pro 3, and the screen is brighter. 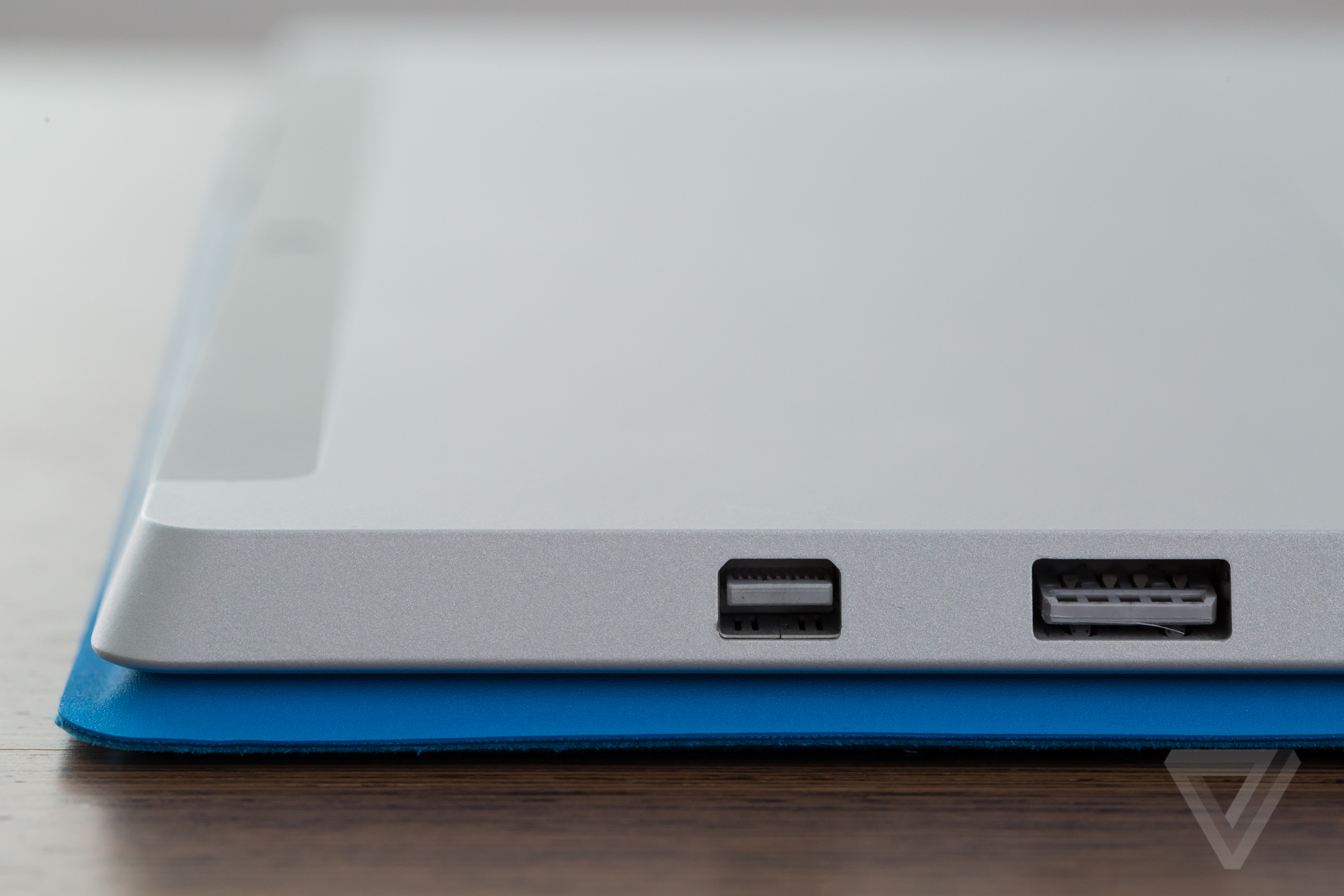 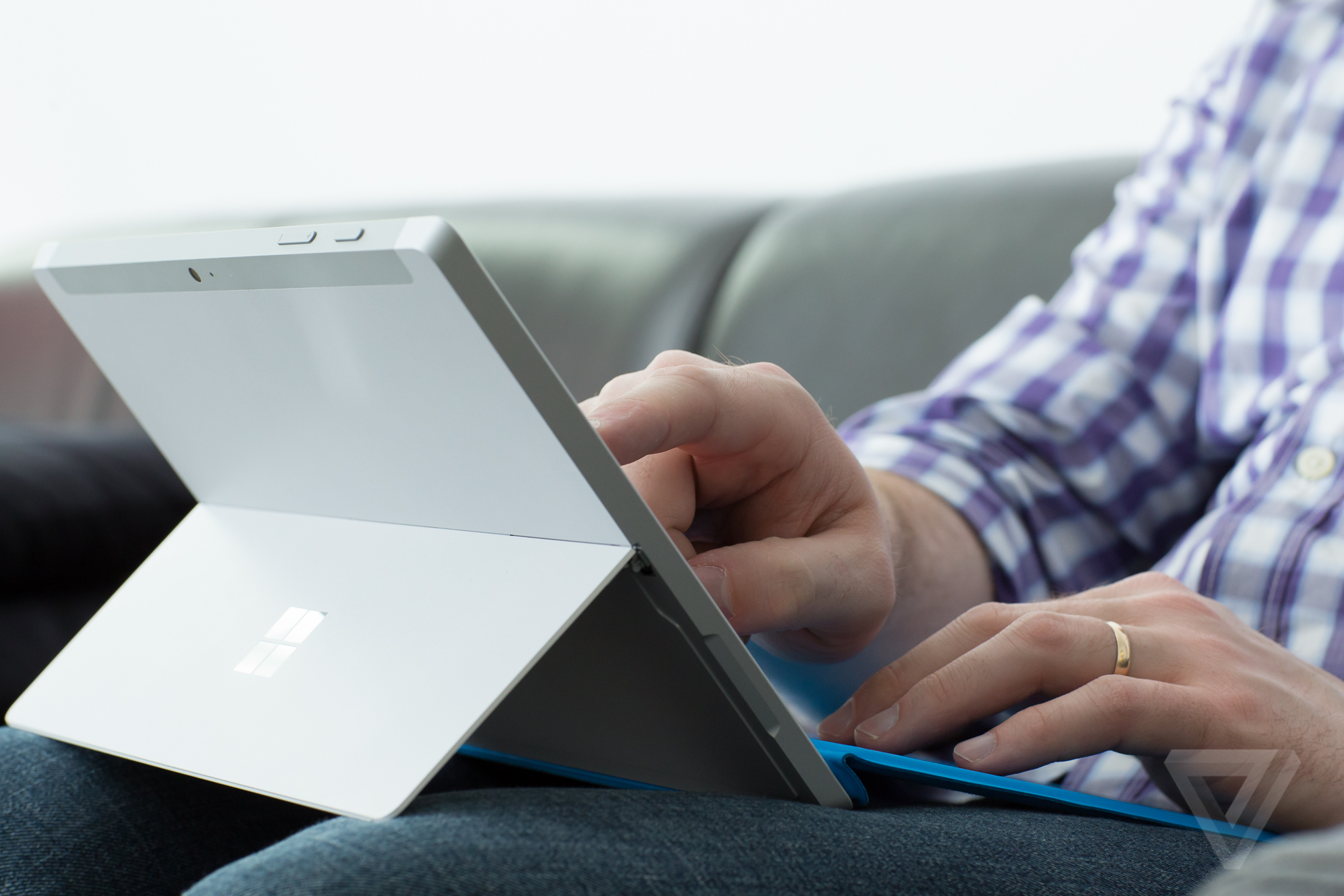 As a tablet, the Surface 3 is still bigger, heavier, and thicker than the iPad Air 2, but you’re also getting a whole lot more. There’s a single USB 3.0 port, Mini DisplayPort, headset jack, and a microSD slot underneath the hinge of the kickstand. They’re not the only ports, though: Microsoft has swapped its magnetic charging mechanism to Micro USB which means you can use a normal phone charger to juice up the Surface 3. It also doubles as a full-size USB port if you buy the necessary adaptor.

If you really want to have some fun, plug a Micro USB cable into the full-size USB and the charging port, and watch the Surface 3 charge itself. It doesn’t really, but in a quirky moment, Windows briefly says it’s charging before realizing it can’t actually redefine the laws of physics.

While the Surface RT and Surface 2 were difficult to use on your lap as a laptop thanks to the limited travel of their kickstands, the Surface 3 can work at three different angles. Disappointingly, it’s not the same redesigned kickstand that the Surface Pro 3 uses, with the hinge to allow you to set it at any angle. On the Surface 3, the first angle is totally useless for the lap, and the second is only slightly better, but I found the third was the one I used the most. It’s far from ideal, though, and I found myself longing for the adjustability of the Surface Pro 3. I use my laptop in weird positions a lot, with my legs crossed, on the floor of a trade show, in the back of a cab, and many other places.

Usually I just move the screen back and forth to adjust the angle and rely on the sturdy base, but with the Surface 3 I found I had to adjust the way I was sitting instead. If you use it on a desk it’s mostly fine, but it still becomes irritating if your desk doesn’t work well with one of those three angles. 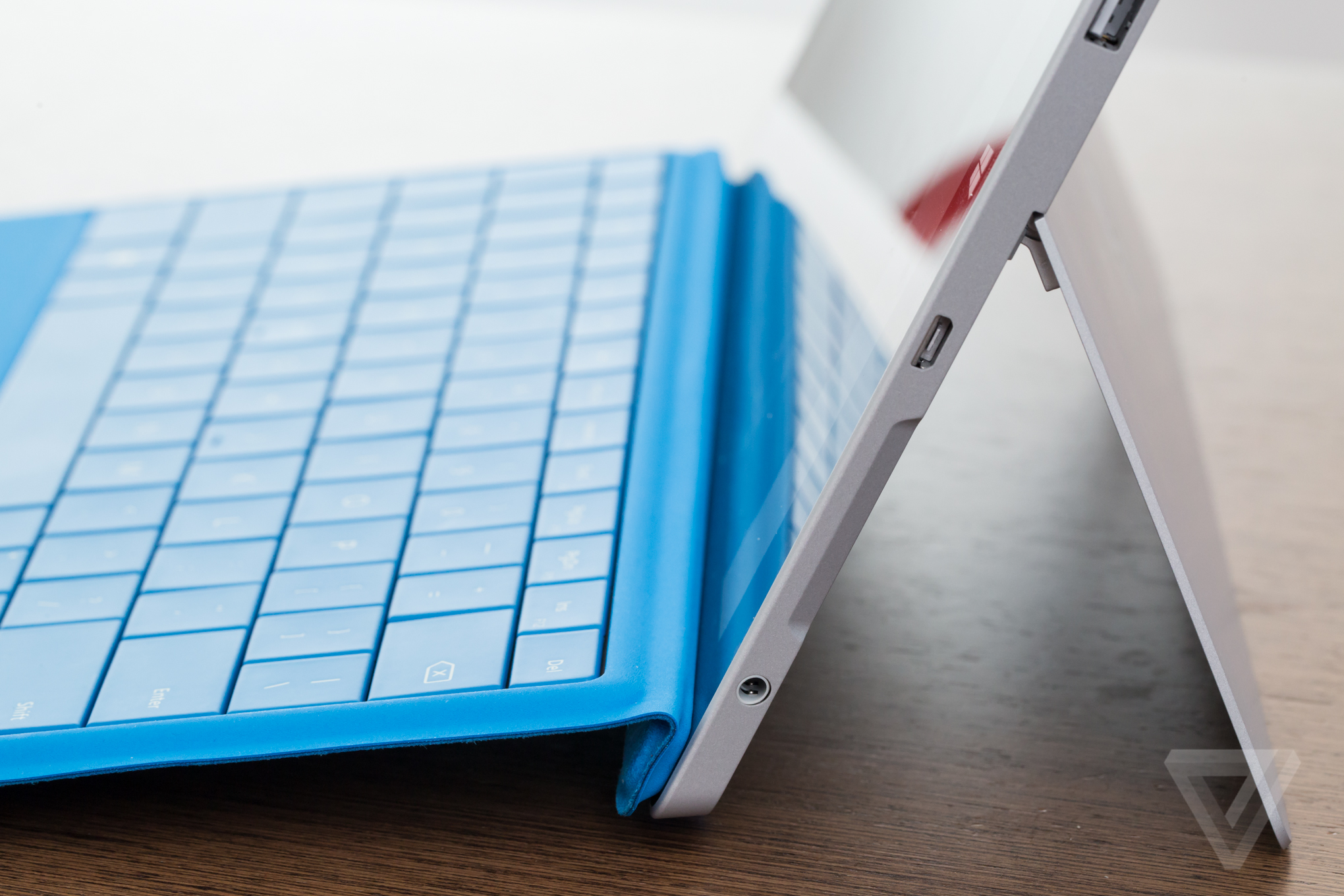 Part of the lap use is eased by the introduction of a new Type Cover for the Surface 3. It’s largely the same as the Surface Pro 3 version, just shrunk down for the 10-inch dimensions. It has new magnets that attach to both the bottom of the Surface and the screen so it’s a lot sturdier. This is a great change, and it really makes a big difference for lap use. It features a full keyboard that’s backlit, and I enjoyed typing away on it for brief periods of time. It’s still nowhere near as nice as a real, full laptop keyboard, but it’s close enough for me. Microsoft is clearly looking toward Windows 10 with the Surface 3, as the keyboard ditches the shortcuts for charms, settings, and other Windows 8 features for PrtScn, insert, and screen brightness controls. You’ll need to buy a Type Cover separately for $129.99 as Microsoft still doesn’t bundle the keyboard. 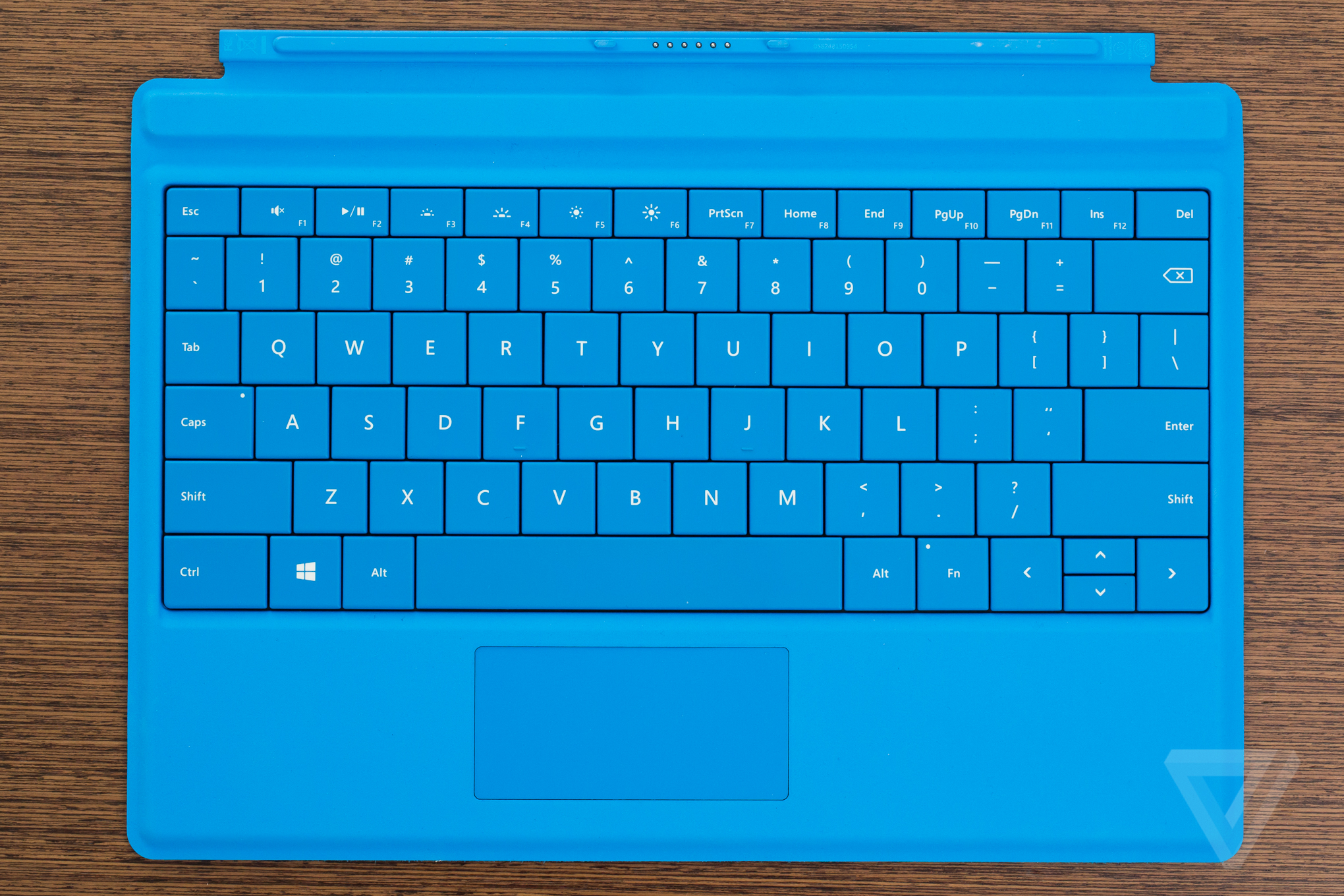 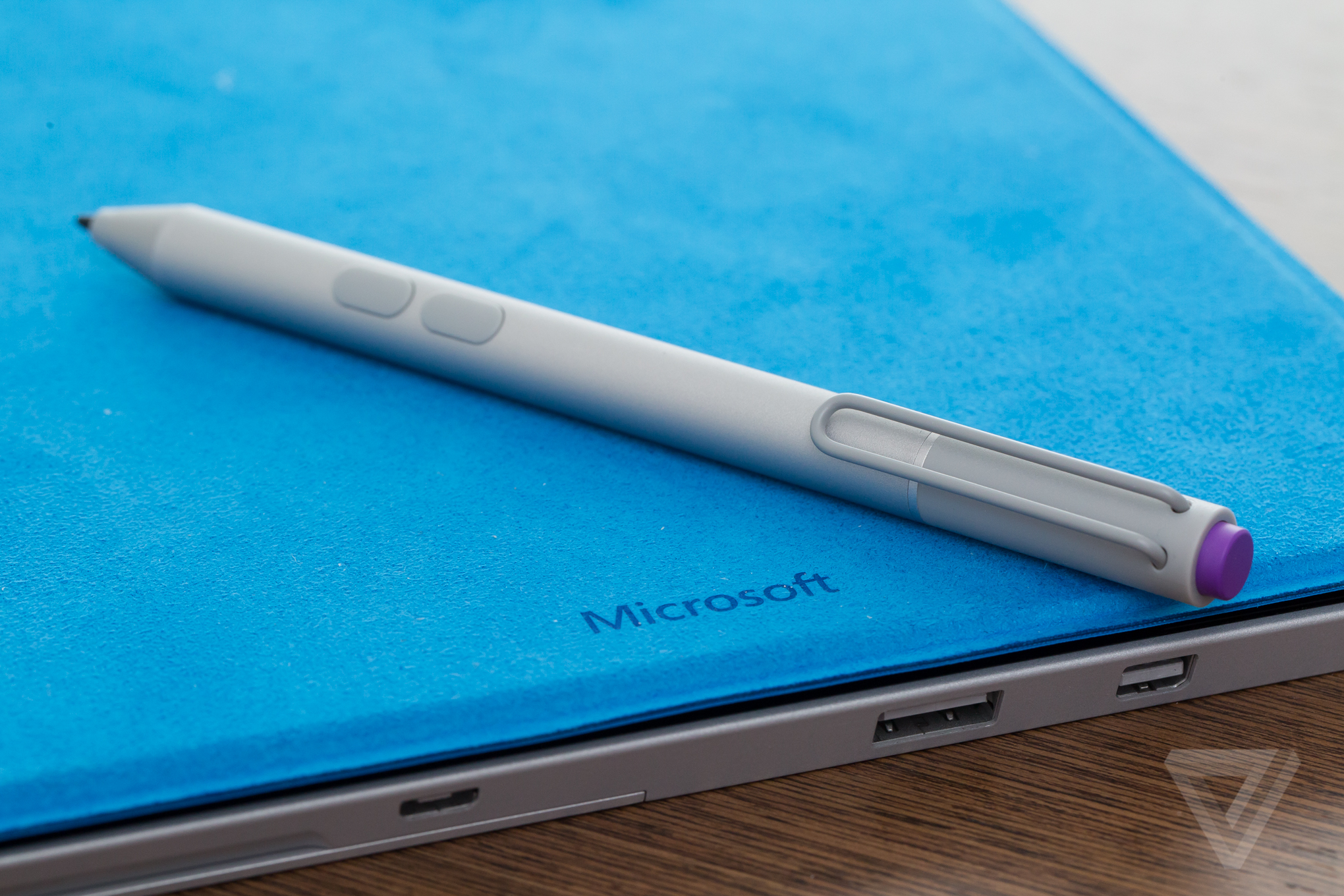 While the trackpad has improved, it’s still far too small. I complain about PC trackpads all the time, and I wish Microsoft and other OEMs would take note that they’re simply not doing a good enough job. This is the primary input mechanism if you’re using the Surface 3 as a laptop, and it spoils the experience if it mis-clicks or starts dragging files around randomly in File Explorer.

The Surface pen is accurate and natural to use

A new way to interact with the Surface 3 is with a pen. While this has traditionally been part of Microsoft’s Surface Pro offering, the same pen from the Surface Pro 3 now works with this cheaper model. It’s functionally identical, and it’s really accurate and natural to write notes in OneNote, or just draw something in Fresh Paint. Like the Surface Pro 3, you can click the cap on the pen at any time (even when the screen is off) and it will launch OneNote immediately so you can start taking notes. It still feels like Windows needs some work to fully accommodate the pen in a more natural way, but using it inside certain apps makes me want to use it more. I just wish I could stow the pen away inside the Surface, but instead there’s a weird loop you can attach to the Surface or the cover. Unfortunately, this pen doesn’t come in the box like it does with the Surface Pro 3. You’ll need to spend $49.99 to purchase it separately. 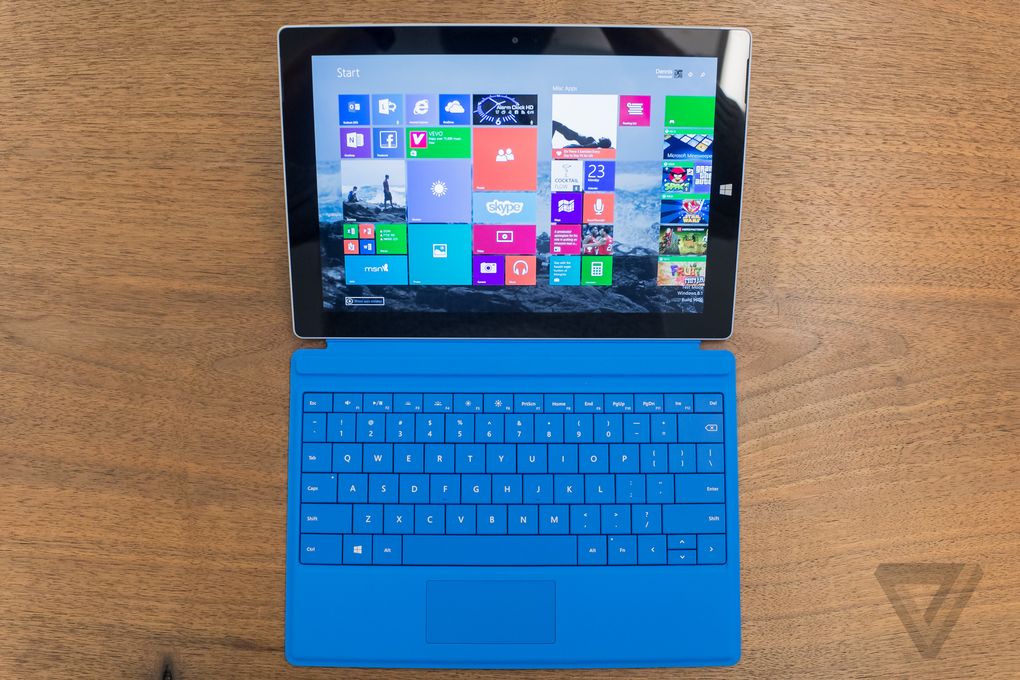 But the biggest change to the Surface 3 is what’s inside. Microsoft has opted for an Intel Atom x7 processor, which means the Surface 3 can now run a full version of Windows 8.1 with support for traditional desktop apps. This isn’t the same Atom processor from the dreadful days of netbooks, but the performance still isn’t great compared to $499 PCs. I’ve used iTunes, Chrome, Photoshop, and a number of other Windows desktop apps, and most of them run just fine at a basic level until you start to push things further. Steam is the big exception, as most of the modern games just won’t run well at all. That’s not really surprising, as this isn’t exactly designed to be a gaming laptop for those titles, but if you want to play some basic mobile games from the Windows Store, it should handle those okay. 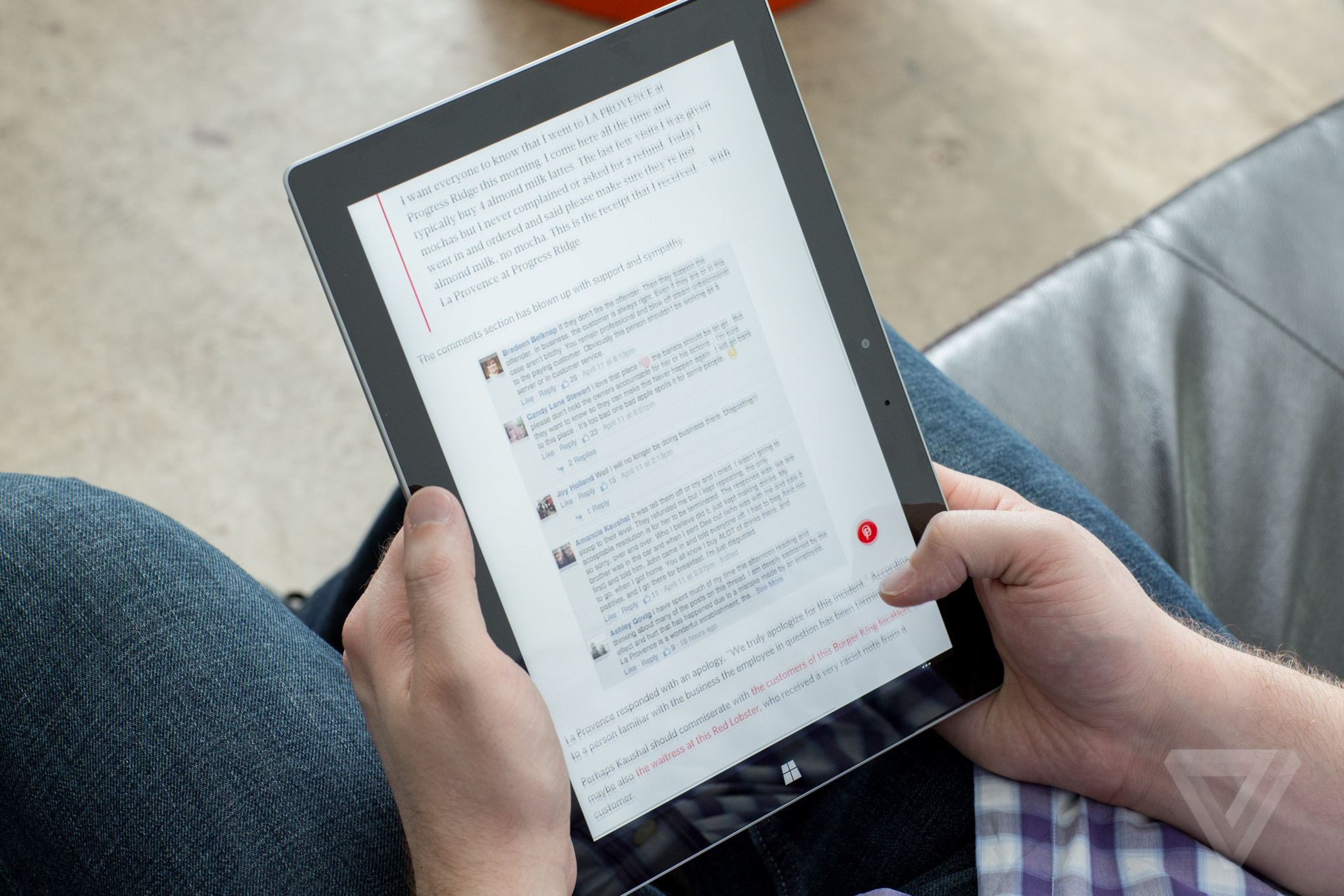 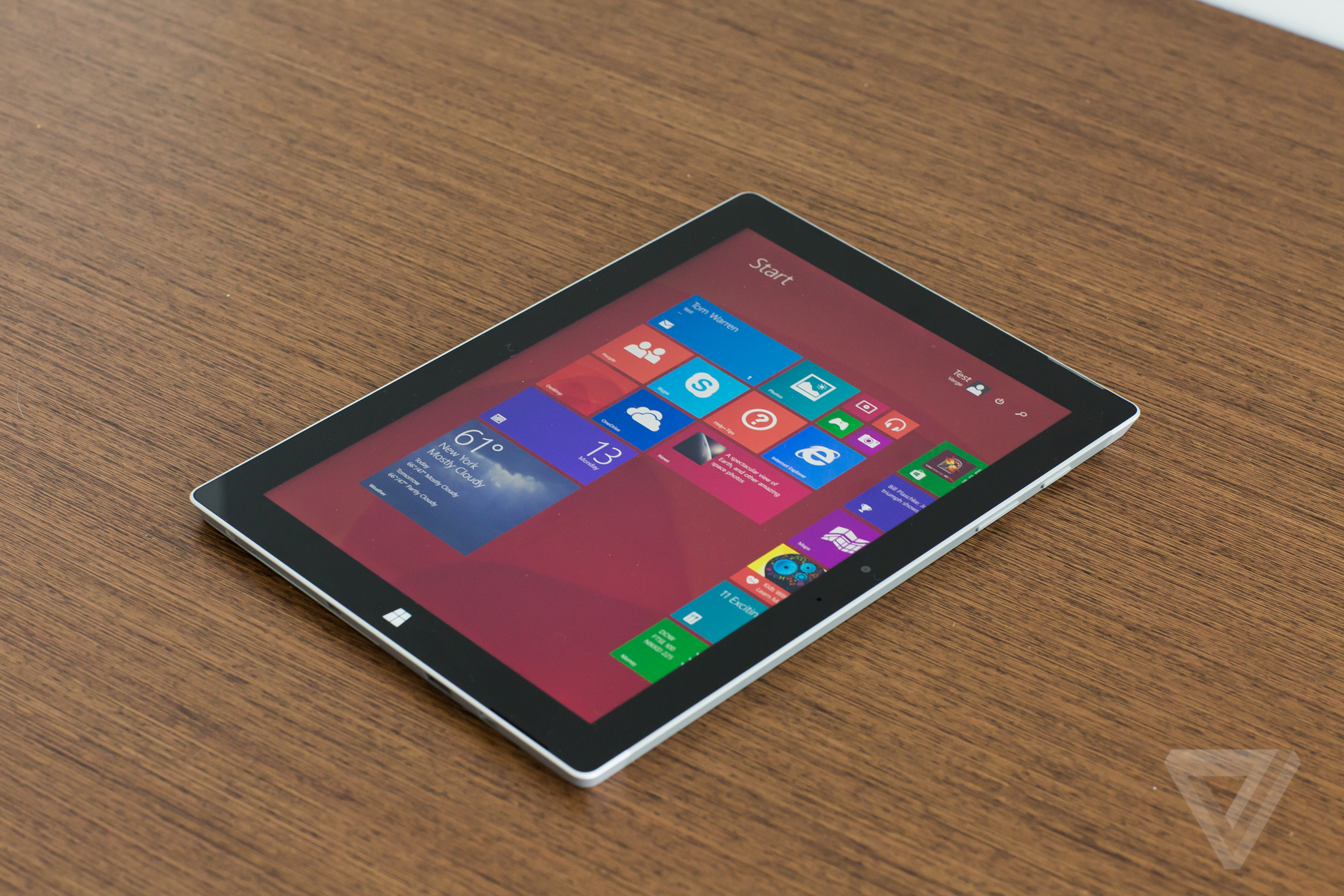 During my days of testing I found that the Surface 3 just about got me through a day of work before needing to be plugged in. It stayed alive for 7 hours and 7 minutes in our battery rundown test, which is only 40 minutes shy of the Surface Pro 3. I’d expect a little more from the Surface 3, but for many it will be enough. I have found that the Surface 3 is pretty aggressive at dimming the display or putting itself to sleep, even when it’s plugged in. If you’re charging and stop using the Surface 3, then it will sleep after just two minutes, so I’d regularly go and grab a drink and return to a black screen. It resumes instantly, but I’m not sure I need my laptop (or tablet) to turn off so quickly when it’s charging.

One of the irritating parts of the previous Surface models is the battery drain when it’s not in use. I would regularly come back to my Surface RT or Surface 2 and find it had an empty battery, but the Surface 3 is much better. I found that it drains around 2–3 percent of battery over a 12-hour period without entering hibernation mode. That’s pretty impressive, and I haven’t worried about just putting it on standby and in my bag ever since. During all this time of battery testing and running apps or games, I never found that the Surface 3 got warm. There’s no fan, no noise, and no heat, just like a tablet should be. 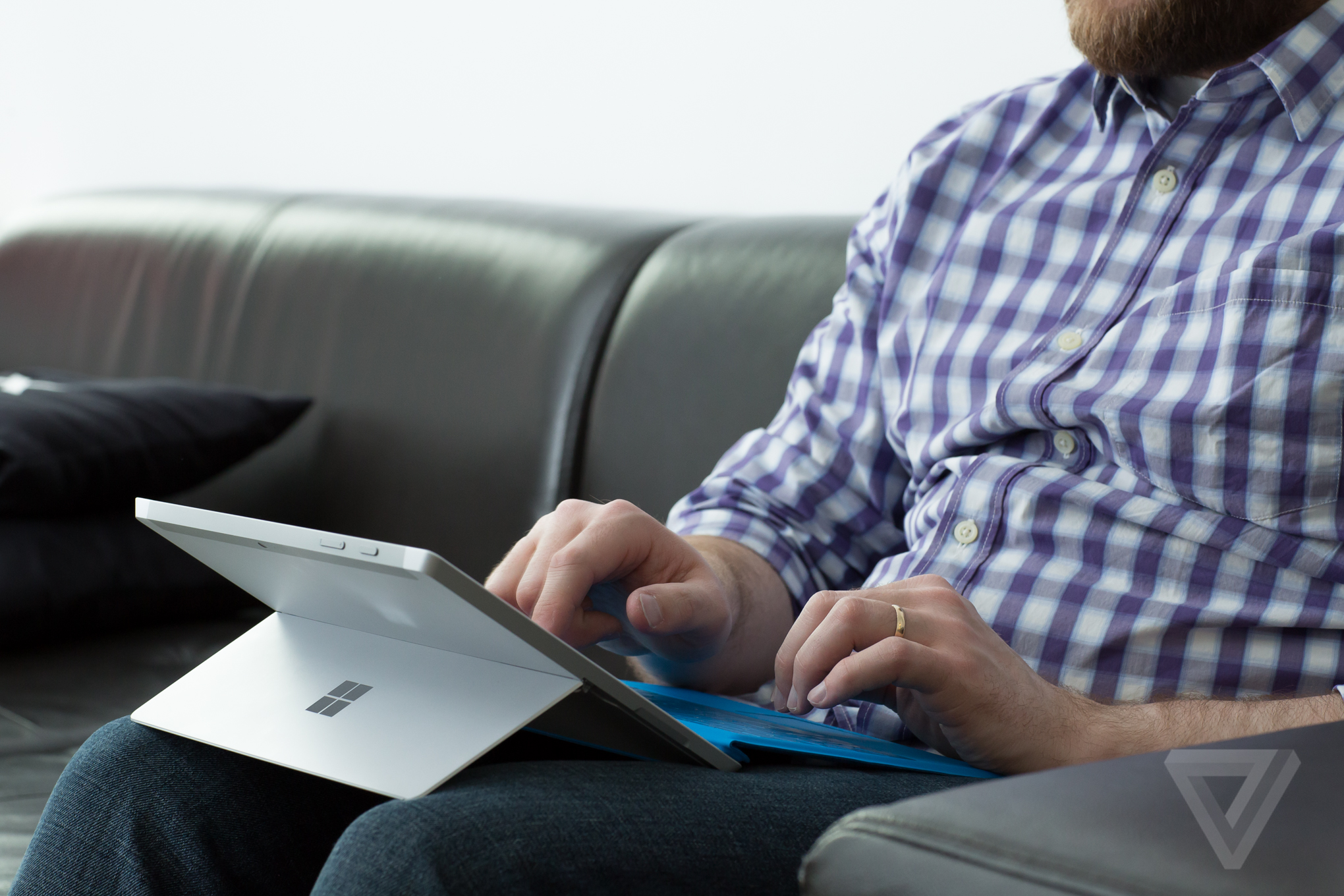 Though it will be upgraded to Windows 10, the Surface 3 ships with Windows 8.1. The fullscreen apps and awkward navigation with a keyboard and trackpad on the Surface 3 is still a frustrating experience in Windows 8.1, but as a pure tablet, I still enjoy the gestures and the Start Screen. It’s the mix that Windows 8.1 doesn’t really get right, and it underlines the Surface as a product. It’s a mash up, a weird combination of legacy and new. A laptop that isn’t really a laptop, and a tablet that’s nearly a tablet but doesn’t have the touch-friendly apps to back it up. The Windows Store is at a standstill, and I’m increasingly finding it hard to discover any meaningful finger-friendly apps. StaffPad surprised me last week as a stunning Windows app, but it’s designed more for the Surface pen than it is for touch.

It's a beautiful and confused machine

Microsoft has this same lack of apps issue on Windows Phone, and it feels like the company is waiting on Windows 10 as its hope for developer interest. Windows 10 will be a free upgrade for the Surface 3, and it should fix a lot of the weird inconsistencies of using this as a hybrid laptop and tablet, but it’s not clear if it will lead to more touch-friendly apps for Windows. It also won’t address the fact that the Surface 3 doesn’t really know what it is. It’s a beautiful and confused machine. It’s fun to use, and it’s really sleek and pretty, but I’m not sure I’d use it everyday. I love the fact that it’s more versatile than an iPad, and I can immediately transition from playing a game to writing an article for The Verge without switching machines, but it’s not good enough in either mode for me to justify giving up separate devices. 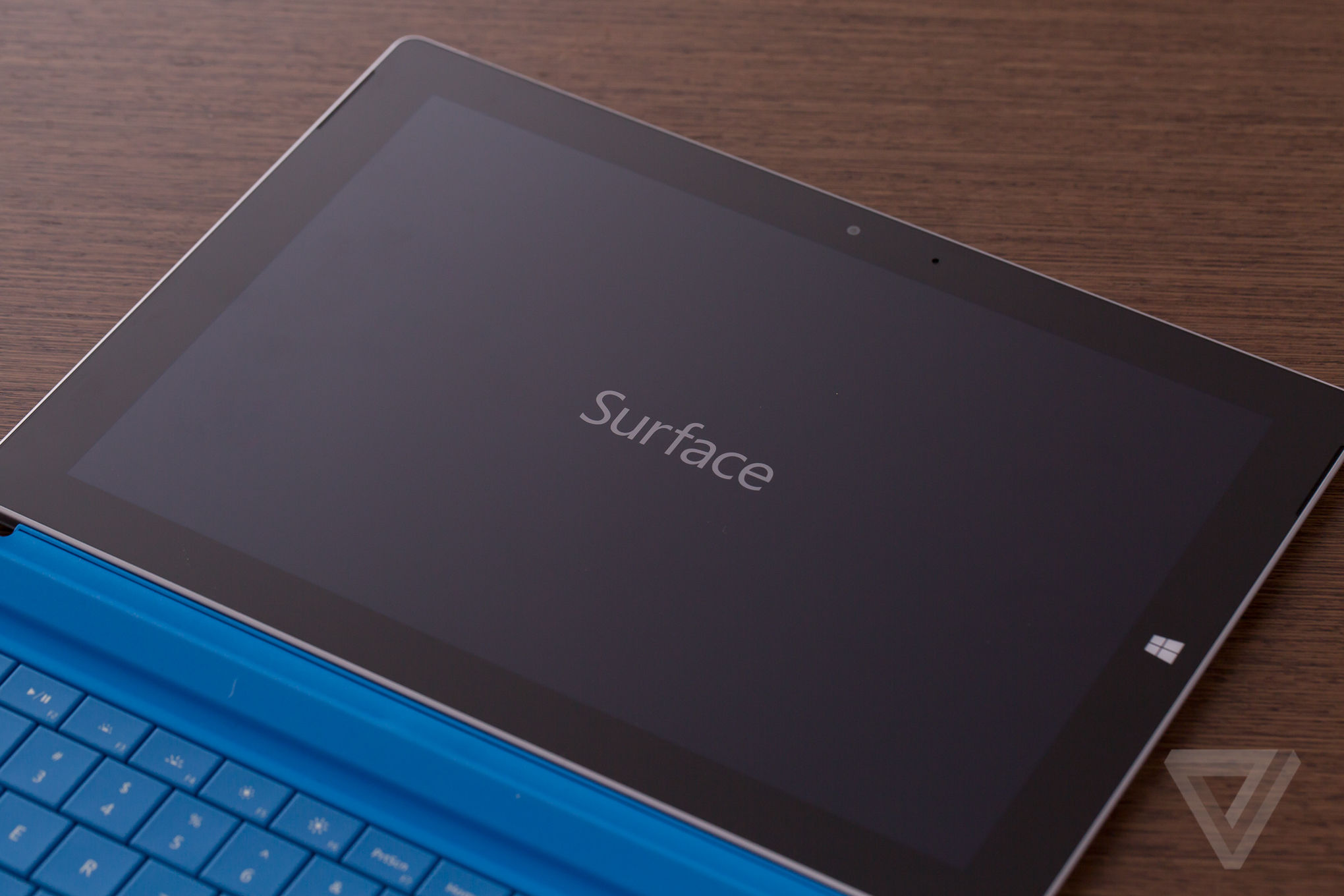 At its core, the Surface 3 is a shrunken-down version of the Surface Pro 3 that’s cheaper and less powerful. For many, the $499 price is attractive, but once you’ve added the Type Cover, it’s nearly $630 — and that’s just the base model. I reach for my Surface Pro 3 a lot at home because there’s something about it I just love, but I always travel with a laptop. The Surface 3 won’t change this for me. There ought to be a market for the Surface, because having the power of touch, keyboard, and pen in one single thin and light device is really compelling. But even three years into this experiment, there are just compromises I’m not willing to make, especially on the laptop side. Unless you’re on a tight budget, I would just recommend a laptop or at least the Surface Pro 3 with its adjustable hinge if you really want the pen and touch input.

It's time for a Surface laptop

Perhaps that’s just the story of the Surface. It’s not the "tablet that can replace your laptop" so much as it’s a tablet that wants to be a laptop, and maybe it’s just time Microsoft made a Surface laptop. That’s really what the Surface wants to be.