Touring a boat that was built to sail through garbage, at first, may not sound all that appealing. When they docked in New York last week, the six-man crew of the MOD70 Race for Water had just passed through one of Earth's five "trash vortexes" — circular oceanic currents, also known as gyres, that have collected thick layers of floating plastic debris. For the next nine months, they'll be helping document some of the worst things humanity has done to the environment. But speeding along the Hudson River, against a backdrop of Manhattan skyscrapers, they’re just a group of sailors showing off their sleek racing boat to a group of excited (if slightly shaky) passengers.

Race for Water is a nonprofit group founded by Swiss entrepreneur Marco Simeoni. With five other crew members and a host of supporters back on land, he’s attempting to traverse each of the gyres over the course of 300 days, gathering trash samples and mapping pollution with drone photography. The boat left from Bordeaux, France last month, and between research stops at vortex-bound islands, the team will dock in places like Capetown, Shanghai, and Rio de Janeiro, trying to spread awareness of plastic pollution. 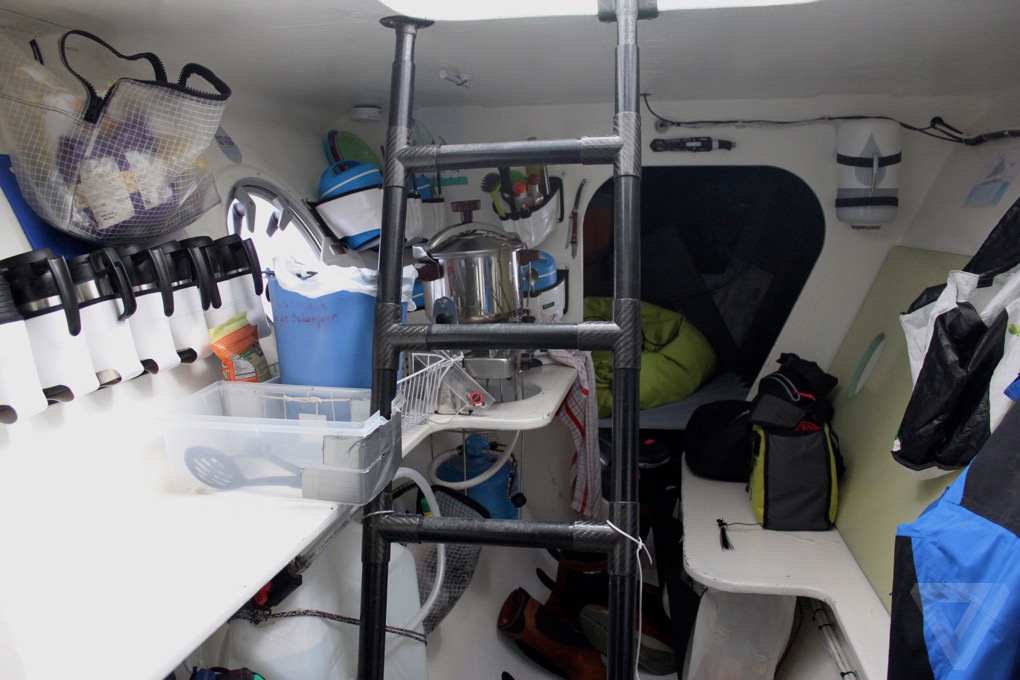 Visiting the MOD70 requires a little preparation. After putting on a full-body windbreaker, life jacket, and helmet, I joined a few other people in an inflatable motorboat, heading roughly toward the Statue of Liberty. Reaching the trimaran a few minutes later, we jumped out and got used to the feel of walking on a springy rope net. Besides some plastic panels in the cockpit, there’s not a lot of solid footing aboveboard. From the shore, it’s hard to imagine how little space six people really have on the boat.

Down a ladder, the living area starts feeling cramped after a few minutes, its walls lined with clothes, equipment, and a miniature kitchen. There are only two bunks. Back upstairs, we all have to duck the ropes, cables, and sails above our heads. But under the net floor, the whole river spreads out around us. According to Race for Water’s site, the wind-powered boat can theoretically reach speeds of 43 knots, or 50 miles per hour. Sailing World has reported a more conservative 35 knots for the MOD70 line. Skimming circles between New York and New Jersey, it edges up to the mid-20s. When we’re racing past a ferry full of tourists, this still feels pretty fast.

"I would say it's one of the biggest threats facing our oceans today."

No one knows exactly how many empty bottles, plastic bags, and takeout containers (to name a few kinds of plastic debris) have slipped into the world’s oceans. A 2015 Science study estimated that out of roughly 275 million metric tons of plastic waste produced in 2010, between 4.8 and 12.7 million metric tons of it ended up in oceans. Wherever it’s from, trash from the coast drifts into the eyes of the gyres, slowly breaking into fine beads.

References to "garbage islands" conjure images of some new plastic continent, but it’s generally a far less dramatic trash-studded sludge. This doesn’t necessarily make it less harmful. "It's more than an eyesore," said Nancy Wallace, director of the National Oceanic and Atmospheric Administration’s marine debris program, at the press conference. "I would say it's one of the biggest threats facing our oceans today. It kills wildlife, it damages habitats, it can be an issue for mariners out on the open ocean, and it costs communities a lot of money."

The most famous gyre is the Great Pacific garbage patch, which has been scouted extensively by sailor and researcher Charles Moore. But another patch sits south of it, and three more are scattered across the Atlantic and Indian Oceans. Simeoni and his team have made plans to stop at islands in each, measuring the density and location of debris. So far, their trip has taken them to the Azores and Bermuda, both within range of the North Atlantic Gyre. 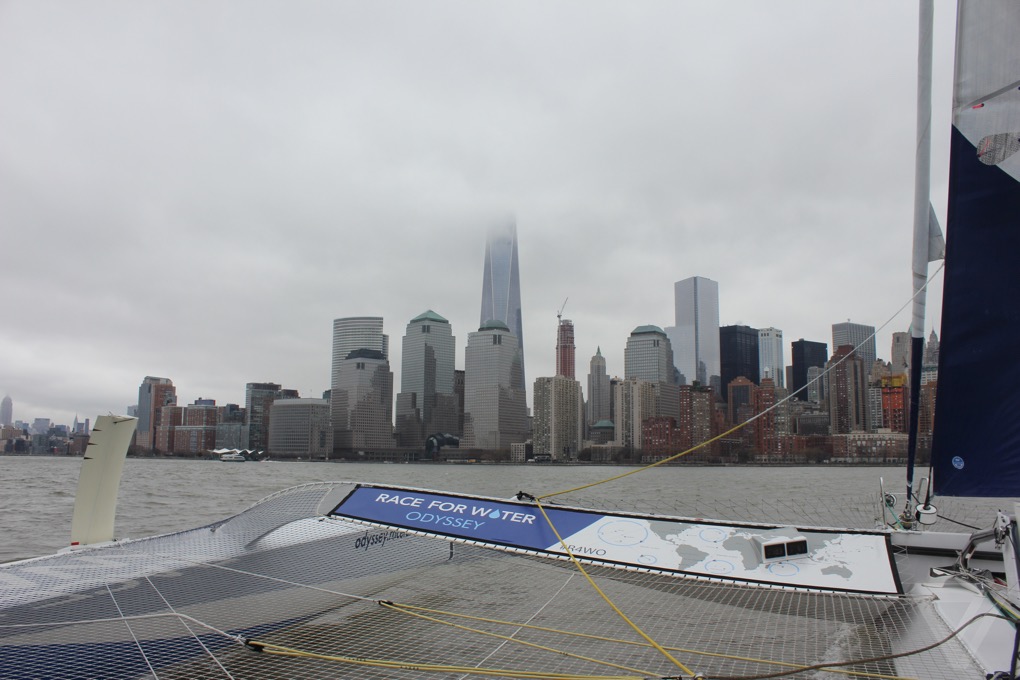 To measure the amount of plastic in an environment, the team digs up small squares of beach soil at each island, gathering a sample that’s usually heavily laced with plastic particles. There’s also another, more futuristic option: drone mapping. The boat carries a SenseFly eBee, an autonomous aircraft that looks like a 3-foot-wide, foam stealth bomber. To scout an area, the team throws it into the air, where it shoots high-resolution photos along a predetermined flight path. With the help of researchers at Duke University and Oregon State University, those pictures can be assembled into a flat collage or a 3D topographical map.

Researchers turn the drone's photos into a 3D map

Ari Friedlaender, an associate professor at Oregon State University and adjunct at the Duke University Marine Laboratory, says drones are cheap and small but deliver useful information. "We're going to be able to quantify ocean plastics or things on the beach down to about 2- or 3-centimeter resolution," he says. That means figuring out how much garbage there is, where it might be coming from, and how conservationists could eventually stop it.

Race for Water isn’t a lone effort. In addition to universities, it’s collaborating with organizations like the United Nations Environment Program. "Together, we will be more strong, and I hope we have a better voice in front of the political decision makers," explained Simeoni at the conference. Wallace praised the team’s attempt to capture usable data. "One of the things I think is so important is the science behind marine debris," she said. That includes simply learning where debris is and how much is out there. "We're really excited they're using our scientific protocols to actually get real data."

Simeoni’s trip is one of several efforts to map plastic debris, but it can’t solve the problem of them on its own. Understanding the extent of the pollution is only the first step, and fixing it will take a worldwide attempt to cut down on plastic waste. For the past few years, NOAA and UNEP have been promoting a framework called the Honolulu Strategy, which includes developing education programs, building new infrastructure to handle debris, and conducting clean-up missions around the coast. If keeping new plastic out of the oceans is hard, shrinking the existing garbage patches is an even more difficult proposition.

But Simeoni hopes that his data and publicity efforts will be enough to get the world to take notice, whether that’s with drone data or an eye-catching watercraft. "Learning more about the issue is what's going to help us solve the problem. But the other real, key piece to solving marine debris is going to be prevention," said Wallace. "The only way we're going to be able to do that is through awareness. And what this expedition is doing is raising a lot of awareness, globally."