There are soon going to be a lot of ways to get news on the Apple Watch, but Breaking News is delivering what may be the first app to actually help break news, too. Breaking News is unveiling an Apple Watch app today that'll deliver alerts on local stories and stories of interest to you. But the app also has a small experiment built in: a tip button, which will send an alert straight to the Breaking News team's publishing system. "We’re expecting new users to tap it just for fun," Breaking News co-founder Cory Bergman writes in an email to The Verge, "but over time we’re expecting more signal than noise."

As we've been seeing with other Apple Watch apps, the tip feature is super stripped down. There's nothing you can do but tap it. When you press the button, it'll send your general location to Breaking News, and that's it — there's no way to offer more information or even tell Breaking News what the story is that you're looking at. The plan is for Breaking News' team to identify when there's something important going on and then search around to see what's happening. "This is wired right into our content management system, and it’s rather easy for us to run location searches in our tool," Bergman writes.

If the tips feature seems to be working, Bergman says that it could eventually be included in the iPhone app so that it can reach more people. That's when he thinks things could really get interesting. "Imagine, for example, what an earthquake might look like," Bergman writes. "We’re already thinking about how a cluster of tips could automatically trigger location searches for editors, making it even easier for us to detect news from social media very quickly. ...Our goal is to get faster at detecting news near our users around the world." 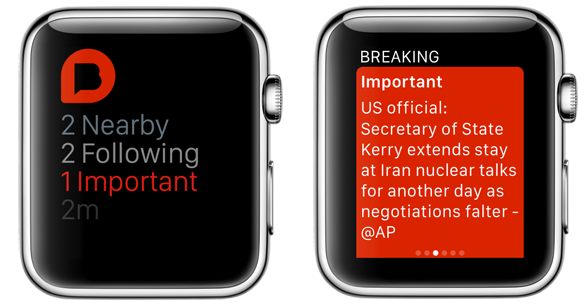 That's critical for Breaking News, which has been focusing on local alerts on the iPhone and Watch. By default, to spare you from the horrors of not-so-important breaking news alerts, Breaking News' app will only send you information on what's happening around you. Breaking News says that you'll get about one of those a day. You can get many more updates if you want them, but they'll only come if you follow specific subjects and stories. Unfortunately, every alert you get on your phone will come to your Watch — Apple doesn't provide an option to change that — so you'd better make sure you really want them.

As a news source, Breaking News' Apple Watch app is meant to be a lot like its Twitter account: something that will give you the gist on top stories. The app will hold five stories at a time, which are supposed to be a mix of local stories, major stories, and stories you're specifically interested in. The intention is to let you catch up on news with just a few flicks. "We’re big believers in the ideal of 'time saved' rather than 'time spent,'" Bergman writes. "If we’re hyper-efficient at giving people just the news that matters to them, we save them time and build loyalty in the long run." That could be perfect for news junkies, so long as notifications don't drive them crazy first.