During her first few weeks at the University of Toronto, Mare Sheppard had no idea what she was doing. She enrolled in computer science, and while she loved problem solving and had dabbled in programming, her high school hadn't offered classes on the subject, so she had little prior experience. She used to sneak glances at her peers' work in hopes of finding a classmate who might be able to help her out. She noticed that one student, Raigan Burns, always seemed to jot down notes before the teacher actually wrote them down on the board. "So I was like, 'Okay, this guy probably knows what he's doing,'" she explains.

"I have to admit," adds Burns, "I knew you were watching, so I was kind of showing off." But by the time the school year was over, it was Sheppard who ended up with the better grade.

That was in 1998. Years later the pair would form a game studio called Metanet Software. In 2004, they released the cult classic freeware game N, a platformer about a ninja jumping through perilous environments in a vaguely futuristic world. An enhanced version, N+, came to the Xbox 360 in 2008. These days, after more than 10 years of working together, the pair seems almost perfectly in sync — they finish each other’s sentences, and when one loses the thread of a story, the other picks it right up. When they talk, you hear a lot of “we” instead of “I.” Later this year, they'll be releasing the final version of the game, called N++, on the PlayStation 4. It's a game that takes all of those years of work and crams them into a single experience.

It may look like a simplistic game about an athletic stickman, and it is that; it’s also the culmination of a decade-long relationship.

"This is essentially a game that took 11 years to make," says Burns. The original N was built in just six weeks, but it took about four years for the pair to get to that point. When Burns and Sheppard first met they weren't thinking about making their own games. Instead, they played other people’s games together, using emulators to explore the libraries of old consoles. They lamented about how a career in programming computer applications seemed pretty boring.

Two people led them to realize that games were where they should focus.

One was another student, a few years their junior, named Jonathan Mak. Burns and Mak — the developer of classic PlayStation titles like Everyday Shooter and Sound Shapes — were in the same Introduction to Electrical Engineering class, and the two hit it off over a shared love of music. While Burns and Sheppard were just thinking about making their own games, Mak had already made a number of them while he was still in high school.

The second inspiration was someone they never actually met. Burns and Sheppard had become enamored with a freeware shooter called Soldat, which was made by a Polish teenager named Michał Marcinkowski. Both Mak and Marcinkowski served as inspirations at a time when indie games were still in their infancy. "If this guy could do it, we could do it, too," they thought.

"It was a huge failure."

They spent the next four years building prototypes and experimenting with ideas, but never actually finished anything until they stumbled across a contest to build a Flash game. To them, it was as an opportunity to finally complete something, and they spent the next six weeks cobbling together what would become N. It didn't win the contest, but over time N slowly built a following. Within months, an unexpected community formed around this hard-as-nails platformer; one fan built a website so players could keep track of and rate the game's many levels, another created a forum so people could discuss strategies. The game became a cult hit, ultimately catching the eye of someone at Microsoft who wanted to bring the game to the fledgling Xbox Live Arcade download store.

Burns and Sheppard enlisted the help of programmer Nick Waanders to handle the Xbox 360 port, and they eventually signed a deal with Atari to create a handheld version of the game as well. The plan was to spend some of their time supervising the ports, making sure they matched their internal standards, while also working on the next game. But it didn't work out like that. The handheld ports in particular proved onerous, and the two found themselves spending 12-hour days focused on designing new levels. That left little time to work on something new.

N+ was a modest success, selling hundreds of thousands of copies. Even today the sales are still trickling in, and it was enough to keep the studio afloat. But after the stress of porting the games and the long hours spent devoted to N, they were ready to work on something new. They had a big project in mind: Robotology, a game that would take the concept of a 3D walking simulator and translate it into a 2D platforming game. It was a huge challenge, and progress was slow. "For basically two years," says Burns, "we just did R&D on Robotology."

But after those two years, the two came to a difficult realization: it just wasn't working. They had solved many of the technical problems, but the actual game wasn't fun. "It was really de-motivating and demoralizing," explains Sheppard. "It was a huge failure." It got so bad that they had to return a grant that the Ontario government had provided to help fund development. It was like two wasted years, and the failure made it difficult to get back into the groove of making games again. "The two years after Robotology, we were essentially just depressed," Burns explains.

Then they found hope in N. 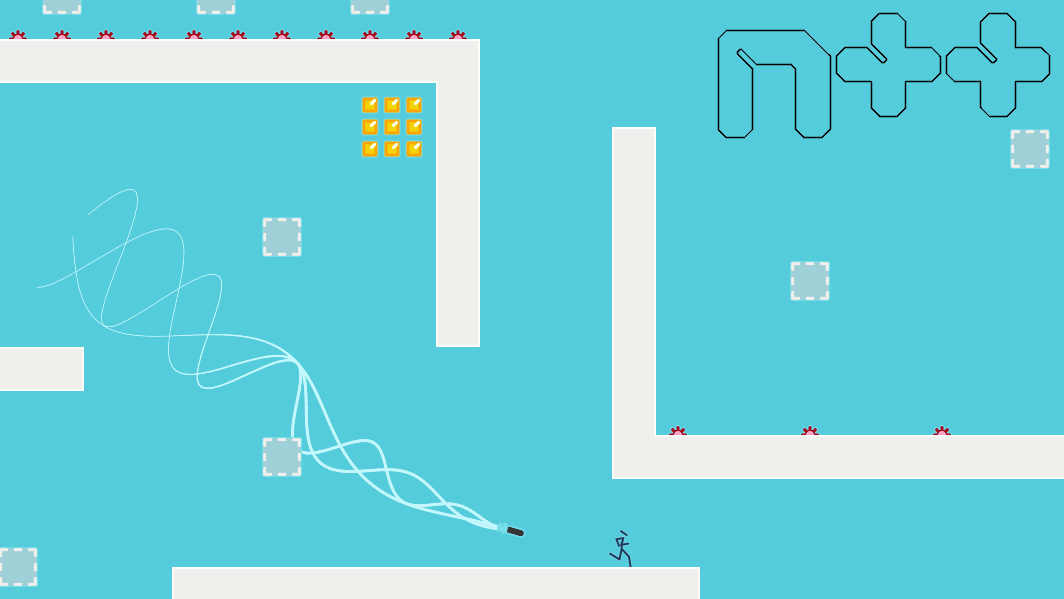 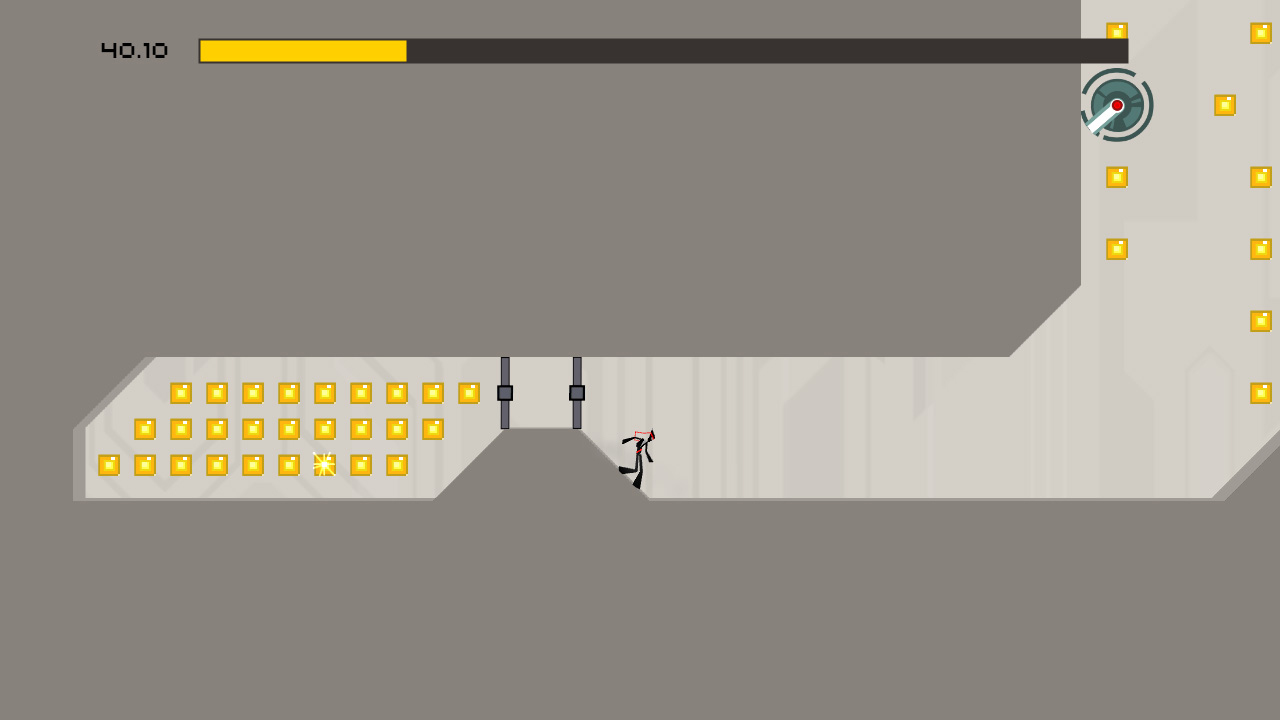 While the creators had largely moved on to other things, the game's community never went away. Players would request new features and levels, and the studio would constantly get emails from fans praising their original creation. Metanet had made a habit of updating the game every few months or so, but it was mostly small tweaks and fixes. They decided that in order to get out of their funk they should do something bigger. N was beloved, but it was a game that was rough around the edges. The menus, level design, and even the code used to build it felt wrong to the studio so many years removed from N's original release. It felt incomplete. "It's something we really wanted to finish," says Sheppard, "but we couldn't because it's something that we hated for a long time."

So they got to work creating an improved version, scrapping the original code and recreating it from scratch. And then something unexpected happened: while working on version 2.0 of N, the two rediscovered their love for making games. They had fun making new levels, and enjoyed using their newfound experience to make the game much better. It wasn’t a chore anymore. Around that same time, a representative from Sony had mentioned that they wanted to do something with the game if the studio was interested. Eventually they decided to go for it.

"The initial decision to do it was hard, because it did feel like giving up to a certain extent," says Burns of the decision to return the game. In fact, when Sheppard announced the game at GDC 2013, he wasn’t even present. "I didn't even go to her talk because I was too ashamed," he explains. "Everyone's coming out with new cool stuff, and we're still stuck on this one thing."

N++ is, in essence, the game the two had always wanted to make. It’s the version of N that was only possible after experiencing a decade of the ups and downs of game development. It has the same core philosophy of the originals — a platformer stripped down to the essentials, with a unique, blazing-fast sense of movement and a ridiculously challenging level of difficulty — but expands on that core in multiple ways. It has more than 1,000 levels, new multiplayer modes, and a level editor. The visuals are noticeably better thanks to slick new vector graphics and wonderful animation courtesy of programmer Shawn McGrath, whom the studio enlisted to help. Meanwhile, Metanet partnered with designer MASA to swap the grey, minimalist look the series is known for with something much more stylish. There's even some color this time around, with bright pinks and blues, contrasting the more subdued palette of the original.

All of this work and attention to detail — Burns says they've spent six to eight months designing the menus alone — is in service of creating the best version of N possible. "The main goal is to never work on it again in a way that we can feel good about," Burns explains. "In a way where we don't, in five years, think, 'Man, we should go back.'"

N++ is scheduled to launch later this year on the PS4, and Sheppard and Burns want it to be the last game in the series. After more than a decade, it's time for something new. The plan is to go back to making — and actually releasing — small, free experiments. And if one of those ideas resonates with players in the same way N did, they can work on turning it into something bigger for a commercial release. They don't know what kind of game it will be, and it will likely pull elements from failed experiments like Robotology, but it definitely won't be a new N.

"We hope it's not another 10 years before we come up with a game," says Burns.