Mark Zuckerberg is defending Facebook's free internet project, Internet.org, after a number of supporting companies in India pulled out this week amid protests for net neutrality. "If someone can’t afford to pay for connectivity, it is always better to have some access than none at all," Zuckerberg writes in a Facebook post discussing the recent events. Zuckerberg argues that net neutrality is "not in conflict" with Internet.org — an app that offers free internet access but only to select websites — because the service does not throttle or block other websites (though you could fairly argue that it blocks every website that it doesn't grant access to).

"It's too expensive to make the whole internet free."

Unlike in the United States, the primary net neutrality argument in India right now isn't about fast lanes — it's about what's known as "zero rating." Zero rating means that accessing some websites and apps doesn't eat into an internet subscriber's data allotment. In the case of Internet.org, access to zero-rated websites is given away for free with the goal of offering some internet connection to those who can't afford any. The side effect of this, however, is that people are much more likely to use free websites than any other websites, giving a distinct advantage to companies that are included in Internet.org. Some opponents have argued that Facebook's intention is to make people confuse the internet with Facebook itself.

Zuckerberg says that net neutrality is compatible with Internet.org (by most definitions, it's not), but his primary argument doesn't really have to do with that. Instead, he's basically just saying that it's too important to get people online to worry about these things. That's not an altogether terrible argument: at least in its incarnation at launch, Internet.org provided access to Wikipedia, an HIV prevention and counseling service, a women's rights app, a job-finding service, and Google. It also included access to Facebook and Messenger, but it's hard to argue that it's wholly troubling when more people have access to these other websites.

The issue is that more and more services are being added, and their competitors don't necessarily get a chance to be included, too. Zuckerberg says that Facebook doesn't pick what's included in Internet.org on its own — it apparently works with local carriers and governments to decide what makes sense for each country and area that it operates in. But by necessity, some websites are going to be left out. "It's too expensive to make the whole internet free," Zuckerberg writes in reply to a question. "But by offering some basic services, it's still affordable for [mobile operators], and it's valuable and free for everyone to use." 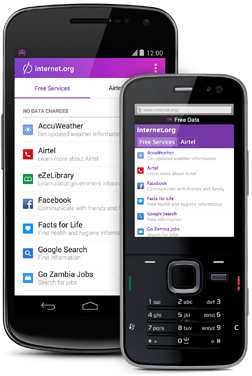 Several selected services are now pulling out of Internet.org over concerns of what it'll mean for net neutrality and the internet at large. The Times Group, which operates The Times of India, withdrew involvement of a local paper and a job-finding website (it did not, however, remove free access to The Times of India, noting that it could not do so unless competitors like India Today and the BBC also pulled out). Another publisher, NDTV, also announced that it would be removing support. As did the travel service Cleartrip. Cleartrip wrote on its blog that, although no money was changing hands as part of its involvement in Internet.org, it ultimately doesn't like "the idea of large corporations getting involved with picking and choosing who gets access to what and how fast."

Facebook says that 800 million people in nine countries are now using Internet.org. "Arguments about net neutrality shouldn’t be used to prevent the most disadvantaged people in society from gaining access or to deprive people of opportunity," Zuckerberg writes. There's little arguing with the idea that spreading internet access is important, but it's worth remembering that alongside every other website on Internet.org is that little blue button to access Facebook.

Over the past week in India, there has been a lot written about Internet.org and net neutrality. I’d like to share my...