Of all the fantasies that Hollywood serves up for us every week, there is one myth that is the most consistently unrealistic across genres, budgets, and countries of origin: our supposedly casual relationships with computers. Most film and television, no matter the story being told, offers a vision of a world in which humans in developed societies are only at a computer two, three minutes a day. It’s a disbelief we suspend almost without thinking about it, for good reason: watching someone go about their daily business on a computer or smartphone is not very entertaining. But at the same time, art and life are beginning to diverge: there's a fictional, cinematic world where the bulk of the developments in our daily lives happen in physical spaces, face to face with other people; and our real lives, where more and more of the defining moments in our lives happen on a screen.

Unfriended actually looks like our lives, for better or worse

Think about the last emotionally charged interaction you had. There's a good chance it happened on Gchat, via text, or in a tetchy exchange over HipChat. Seeing your ex with his new girlfriend on Instagram is the new seeing your ex with his new girlfriend at the bar. There's a wholly different dramatic grammar for these situations — how a moment plays out, how one reacts to it. That unreadable look on your friend's face during an uncomfortable conversation has been replaced by a speech bubble and a pulsing ellipsis.

This is the one resounding success of Unfriended, an otherwise rote teen horror film that hits theaters today. It actually looks like our lives, for better or worse.

Unfriended takes place entirely on the desktop of Blaire (Shelley Hennig), a pretty, sweet high school girl who we meet during a Skype chat with her boyfriend Mitch (Moses Jacob Storm). In an early red herring, their flirtatious banter turns menacing when Matt threatens Blaire with a knife if she doesn't take off her clothes for him on camera — she's alarmed at first, then later admits "you're sexy when you're violent," in a moment clearly meant to send any lost parents running from the theater in a panic.

Blaire and Matt are soon barged in on by the rest of their friend group, all of whom should be familiar to anyone who's seen more than one teen horror film in their lives: the vain slut, the drunk jock, the funny fat guy. We learn that it's the anniversary of the death of their classmate Laura Barnes, who was driven to suicide after a particularly gnarly drunk video of her was spread around on social media. Then someone notices there's another user in the Skype chat — but he or she is eerily silent. It's Laura's ghost, of course, returned to exact vengeance on the classmates that tormented her.

Like VR filmmaking, the director can only suggest where the eye should go

Unfriended's marketing department is playing up the topical cyberbullying angle for obvious reasons, but it undersells how revolutionary it is on a technical level. The trailer cuts to full-screen close-ups of the individual Skype windows, but this never actually happens in the film. The frame remains locked off to the exact area of the desktop; we never see a face bigger than one-sixteenth of the screen. "Cuts" are made by whatever Blaire chooses to bring up on the screen, whether its Facebook Messenger (where Laura communicates with her directly) or a paranormal forum explaining the phenomenon of the dead coming back to possess people via social media (helpfully scrolled through at a comfortable reading pace for us by Blaire while her friends argue in the background). Otherwise, we are never explicitly forced to look at anything; like the first forays into VR filmmaking, the filmmaker (in this case Russian director Levan Gabriadze, in his US feature debut) can only suggest where the eye should go via composition. 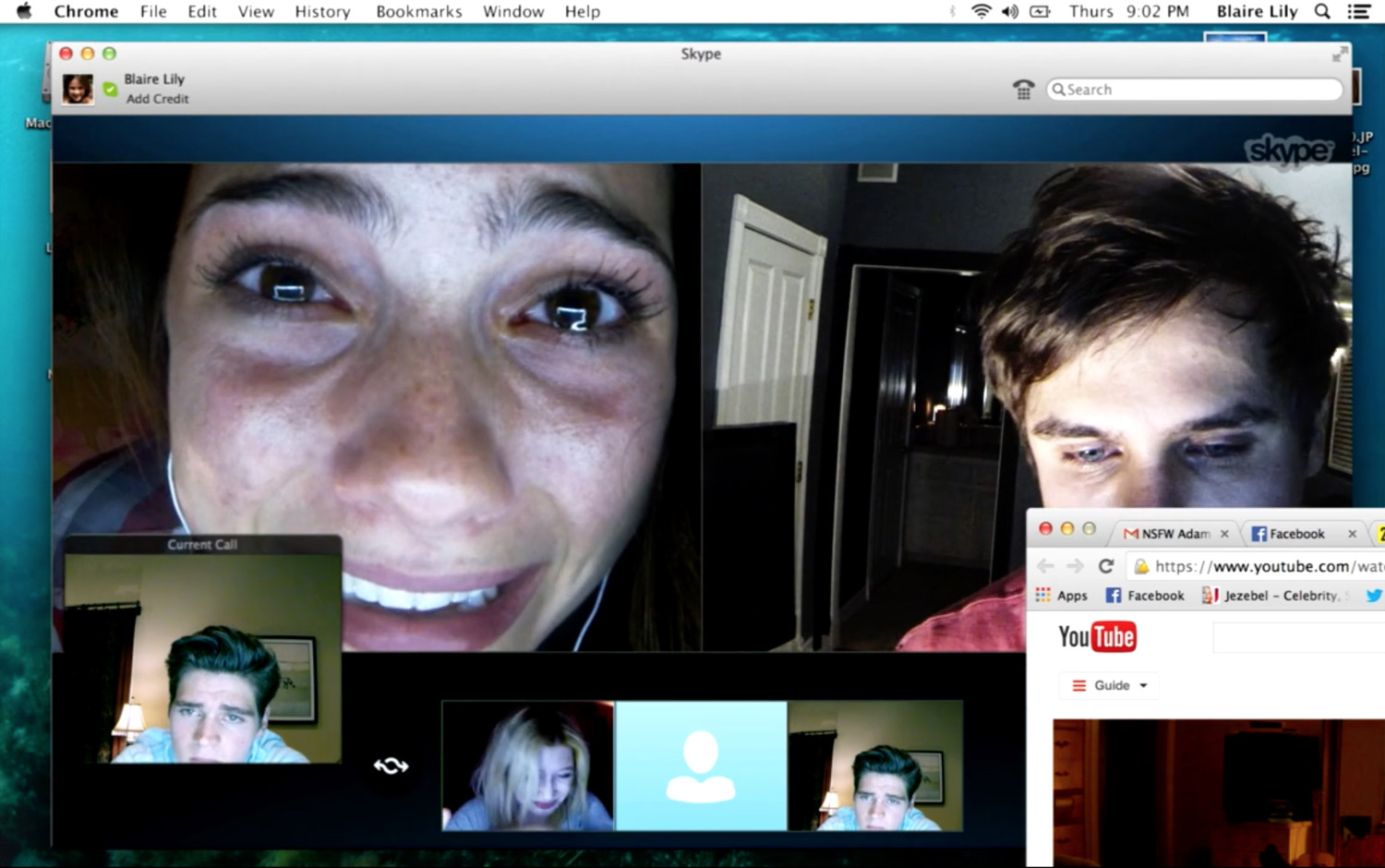 It’s the details that sell the conceit. The first moment in which my jaw dropped was simple, but astoundingly effective: at one point, Blaire is Facebook messaging with Mitch, in an effort to explain Laura’s troubled past. All we see is her typing and deleting as she tries to figure out how to say it: "When we were kids…" Delete, delete, delete. "Her stepdad…" Delete, delete, delete. "Family stuff." Send. And all the while we know Mitch just sees that "Blair is typing" notification — 15 seconds of that, followed by two words. We know what that means! That is now as standard a human expression as a lip bite or a furrowing of the brow! To see that acknowledged, and utilized for dramatic effect, was thrilling, unlike anything I had seen in a film before.

This new storytelling language is the main reason to see Unfriended, but the digital parallels of standard horror tropes are also a lot of fun, both clever and so obvious it’s a wonder nobody has taken advantage of it before. Lookout Point becomes a sexy Skype session. The desperate scramble for outside help becomes a whirl through Chatroulette. (The outdated use of the latter is meant for intentional laughs, as if to say "yup, these people are that desperate.") And the film uses glitches and video freezes as its main delivery system for digital horror: a character’s self-inflicted suicide-by-blender is all the more alarming for how little we can actually make out through the degraded stream. Hitchcock would approve.

Unfriended’s approach to storytelling has already been dismissed as a gimmick by many critics, on a continuum with the security cameras of the Paranormal Activity franchise (like Unfriended, another Blumhouse production). Much of that is due to its genre, and its by-the-numbers revenge storyline. But is it really a gimmick to create a convincing facsimile of the rhythms of our virtual interactions? At what point is a shot of a girl’s laptop any different than a shot of that same girl walking through the halls of her high school? Desktop horror — or drama, or mystery, or romance — isn’t a genre I need to see much more of in the near future, but there have been crazier ideas that have far less to say about the human experience. If art imitates life, then the next screen star may very well be the screen.