Your favorite websites can now send notifications to Chrome on Android

Your favorite websites can now send notifications to Chrome on Android

When visiting a site that supports notifications, you will receive a prompt asking you if you'd like to turn them on. When you do, that website can send you push notifications whether you have the browser open or not. You can manage those notifications in a settings screen within Chrome — unfortunately, the site-by-site settings live there, not inside the usual spot for notifications settings in Android.

No iPhone support yet

Along with an improved workflow for getting website icons on your homescreen, it's the biggest step in a long time toward giving the so-called "mobile web" a much-needed boost. Google (and other mobile web proponents) are hoping it will stem the impulse many sites have toward developing native apps just so they can take advantage of notifications. According to an August 2014 ComScore report, apps are used almost seven times as much as the browser on mobile devices in the US.

However, Google is exhorting people to take a closer look at that report, which also notes that the majority of app usage comes from just a small number of apps. The argument goes that the web is actually not doing as badly as those high-level numbers imply on mobile. More importantly, Google hopes that more app-like experiences for websites could drive more mobile usage for those sites.

That may well be the case, but for it to happen, more websites will need to update themselves to support notifications — and it's not as simple as you might hope. Google's Alex Komoroske explained that it requires an HTML5 feature called a Service Worker that, while cross-platform, does require a fairly high level of skill to implement. There's also the issue of cross-browser support. Chrome notifications will work on desktop and on Android, but not on iOS. Mozilla is expected to support a similar solution. Apple has implemented a notification feature for Safari on desktop, but it works differently and not on the iPhone. In other words, mobile web notifications aren't available on iOS yet.

Asking developers to wrangle multiple different solutions has long been a bugbear for web development, and in the short term it looks like it will be the same for notifications. One service, Roost, offers tools that make it easier for developers to implement notifications across multiple browsers and to analyze how well they're doing. Roost co-founder Tim Varner says that although "there is a fairly high level of expertise required" to develop web notifications, it will become a standard across many sites [as] soon as other browser vendors get on board with this new solution. "All browsers are going this direction," Varner argues, "web push is going to be a standard communication for the web just like it is for mobile apps." 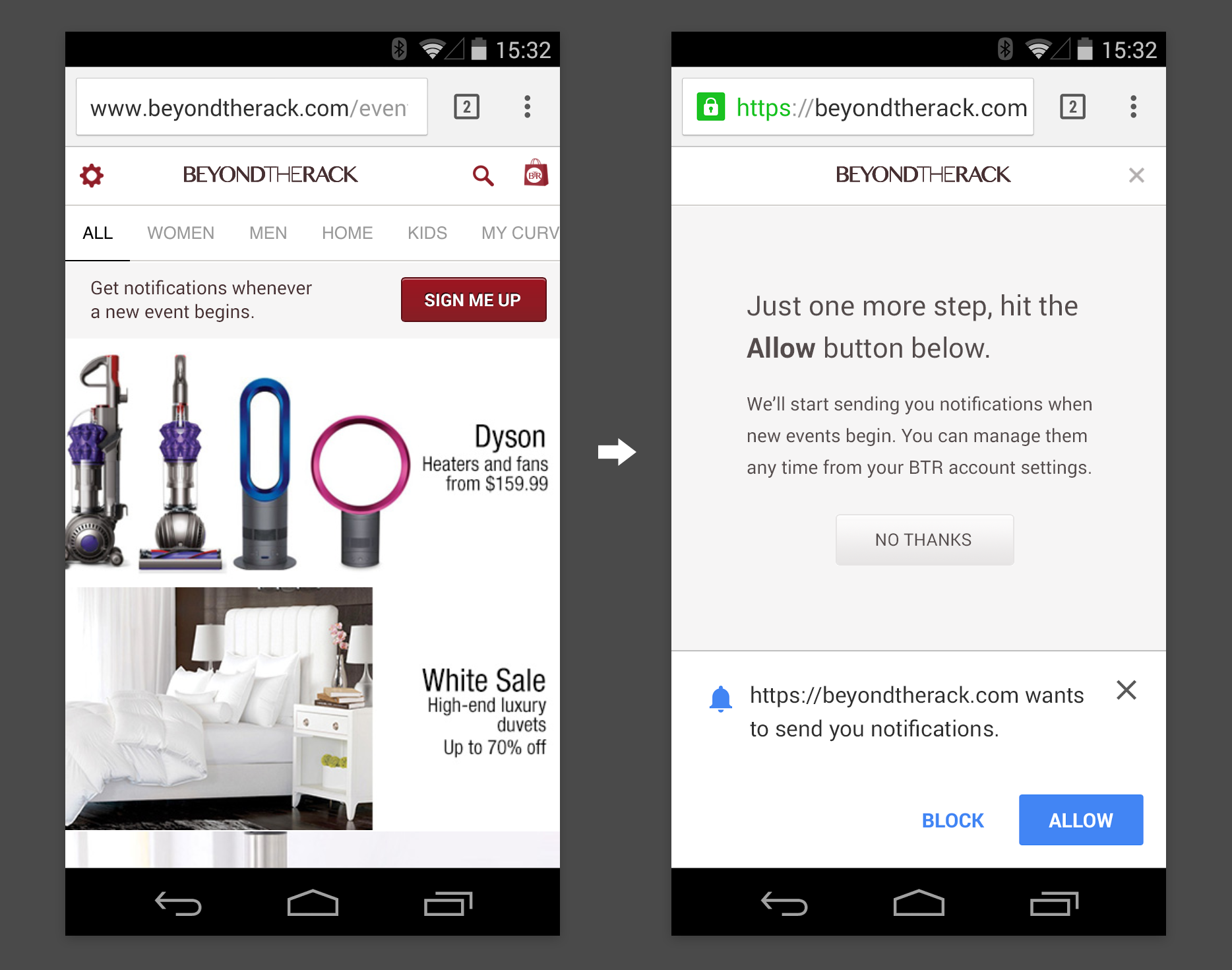 The thought of getting even more notifications (especially from websites that you only occasionally visit) could be annoying. So it will be up to web developers to show restraint in choosing which notifications they send. But it's been clear for some time now that notifications are an essential part of the mobile experience, so it's high time that the web got a solution for them. Notifications are also one of the best ways to get attention on the next frontier of mobile: wearables.