Share All sharing options for: BuzzFeed has already made a cute animal app for the Apple Watch

If you've ever needed a couple cute cat photos to get you through the day, then BuzzFeed has some plans for the Apple Watch that you're going to want to hear about. The publication is unveiling two Watch apps today that are meant to deliver bite-sized takes on some of its more addictive content. The first of those apps is an Apple Watch version of Cute or Not, a BuzzFeed iPhone app that lets people swipe left and right to vote on cute animal photos.

"A good way to get your cute animal fix very, very quickly."

"That's a good way to get your cute animal fix very, very quickly," Ryan Johnson, BuzzFeed's mobile engineering VP, tells The Verge. "We were thinking you'd just quickly go look at a few pictures of pets when you're in the need. You can get that little jolt of pet quick fix." 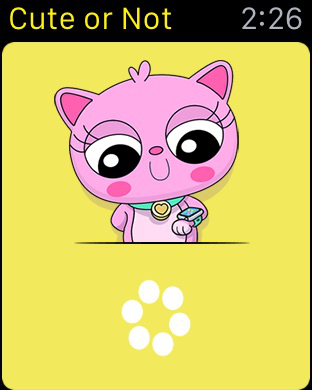 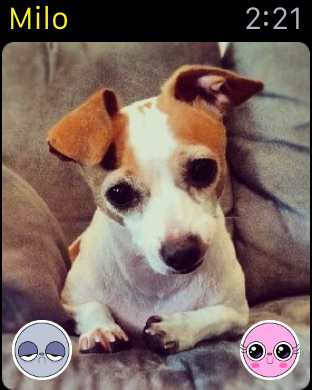 Cute or Not on the Watch is really that simple. Swipe a few times, see a few cats and dogs, and then lower your arm when you have something better to do. BuzzFeed's other app is a daily poll, which will ship as an extension of the existing iPhone app. It'll feature a single poll each day — questions include pressing subjects like "Who should Hermione have actually ended up with?" and "Which of these is the worst new word of 2015?" — with each poll appearing only to Watch users.

"We wanted to go for a quick engagement," Johnson says. "Something that would take about 20 seconds or so. That's how we landed on the poll." Johnson describes both apps as experiments. They're BuzzFeed's first attempts at playing with the Watch to see how it can be used to engage with people. "We wanted to be at the forefront of new technology and what's coming out there and experimenting with new formats," he says. "Just generally, that's how we operate." Both apps will be available today, so they'll be ready when Watches start arriving on Friday. 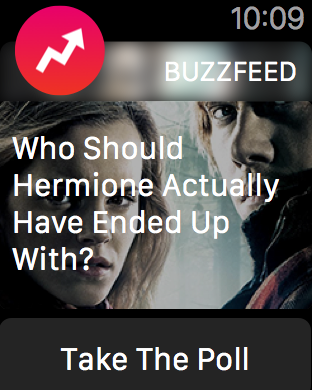 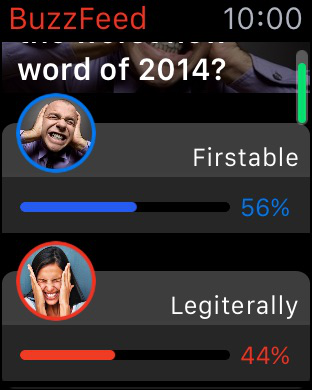 BuzzFeed has been increasing its focus on mobile apps since last year. It acquired a small developer back in December and planned to continue growing that team. Cute or Not was launched in February, and BuzzFeed is now working on a news app. It doesn't have specific next plans for the Apple Watch — nor current plans to monetize those two apps — but Johnson says that BuzzFeed is interested in how the Watch can be used for communication. "That's one thing I think we're really excited about and watching to see where it develops," Johnson says. "Is this a way that people use to communicate with one another? If so, that's something we'd like to explore further."