According to a number of studies and overwhelming anecdotal evidence, we check our phones a lot. Like, hundreds of times a day a lot. All of that, which involves turning the screen on and using apps, takes a toll on our battery life. Most phones won't last through the day without needing to be charged, but if you didn't compulsively turn it on every few minutes, they probably would.

There have been a number of approaches to help solve this problem — Motorola's Active Display and Nokia's Glance screen both aim to keep you from turning your screen on as often — but if you use an iPhone, you're left turning your screen on an awful lot. Popslate, a new accessory for the iPhone 6 and soon the iPhone 6 Plus, could potentially change that. The $129 Popslate case puts an E Ink display on the back of your iPhone, which can be used to display images and text in a black-and-white format that doesn't drain your phone's battery. It's not unlike having a miniature Amazon Kindle clipped to the back of your smartphone and is very similar to the integrated system used by Russia's YotaPhone. 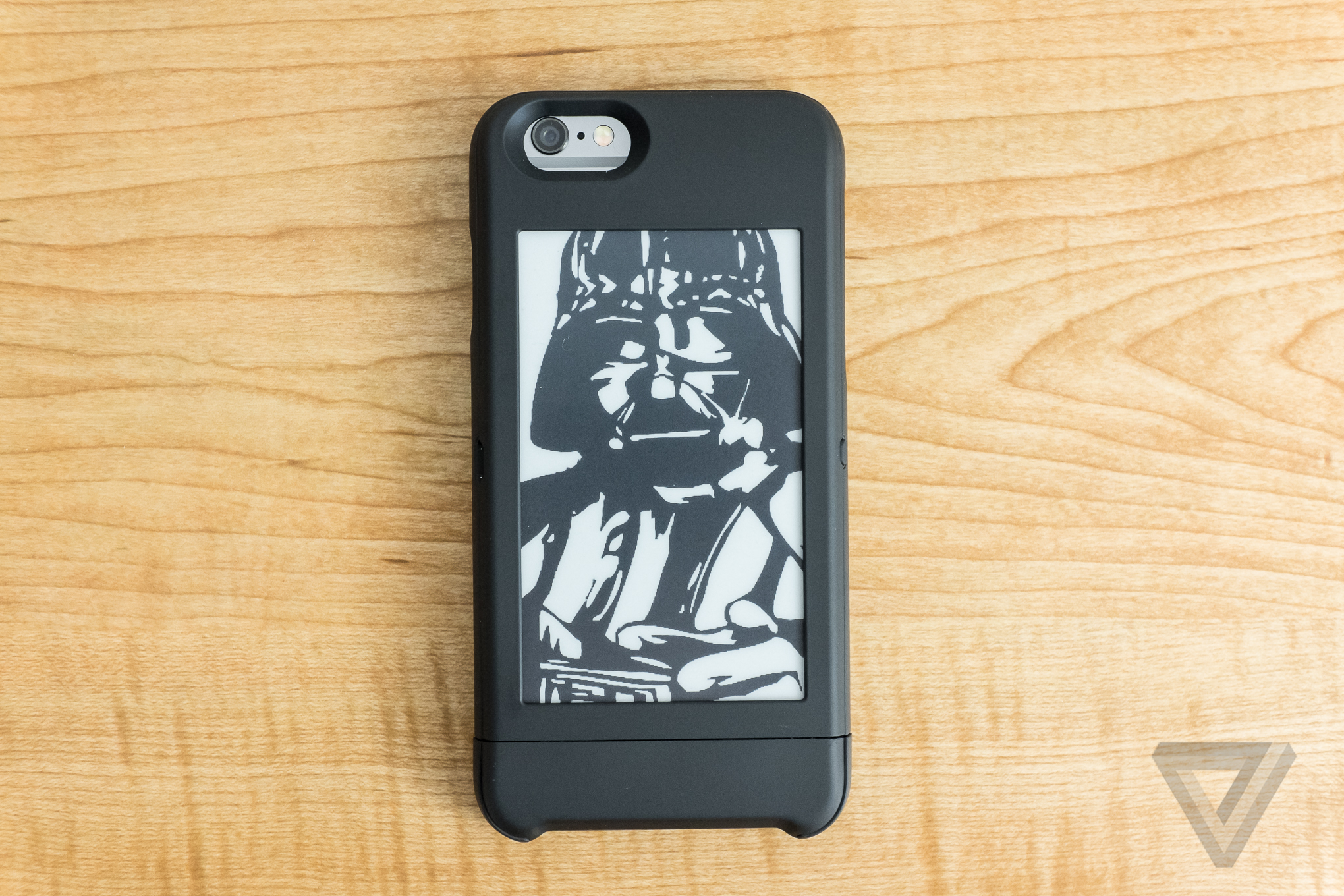 The Popslate looks a lot like a Mophie-style battery case, but instead of recharging your phone, it talks to it over Bluetooth and displays images that you "pop" to the screen on the back. The case itself has an internal battery good for five to seven days and can be recharged with a standard Micro USB cable. But even if the battery dies inside the case, the last image displayed on it will remain there indefinitely, thanks to E Ink's retentive properties.

An always-on display has a ton of potential uses

There are a lot of potential use cases for an always-on display on the back of your phone: it could show your agenda, the current weather, recent notifications, a static map, a boarding pass, or even your Starbucks card. Displaying any of those things normally requires turning on your iPhone and waking up the display, but with a case like the Popslate, that's avoided.

But the first version of the Popslate, which is shipping now, doesn't quite live up to that potential. While it would be great for the Popslate to automatically update itself based on time of day or your location, right now all you can do is push static images to it from a companion app on the iPhone. You can display screenshots, pictures, or graphics in glorious grayscale, but you have to manually change the image anytime you want to display something different. A button on the side of the Popslate lets you cycle through the last eight images stored on it, but there's no function to automatically rotate through them. (And with the eight-image limit, don't expect to use the Popslate to catch up on your favorite ebooks or your Pocket queue.) 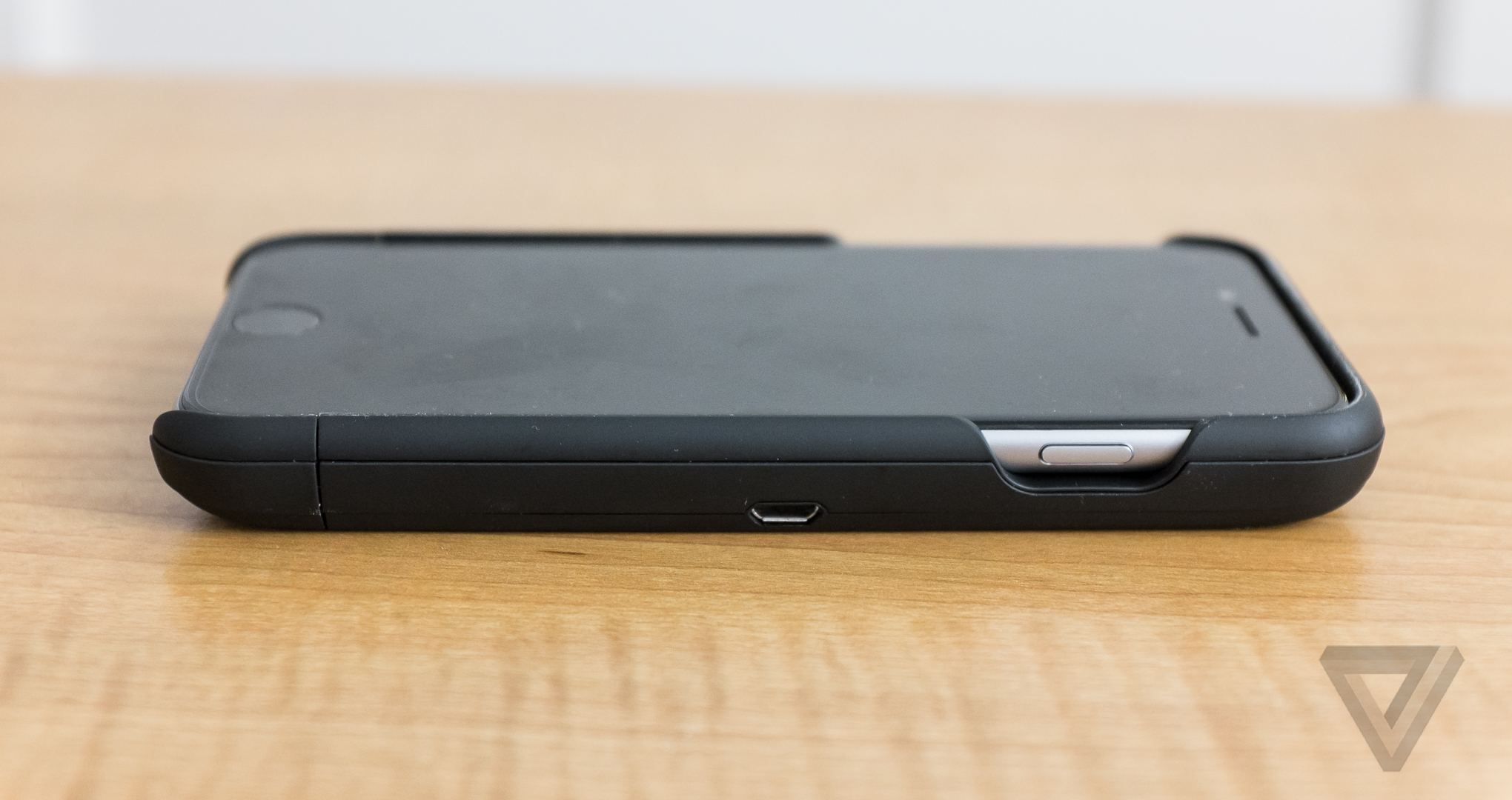 Those limitations won't be in place for long, though. Popslate co-founder Greg Moon tells me that the company plans to roll out a back-end data service that will automatically push new images to the case based on your location, time of day, or other factors. With that capability, the Popslate becomes much more than a decorative piece and can actually be useful in your day-to-day life. Imagine arriving at work and having your day's agenda automatically appear on the back of your phone or seeing the score of your favorite team's game without having to turn on your phone. This functionality is expected to be available in the next couple of months, but Moon wouldn't commit to a firm date.

The Popslate is mostly decorative for now

For now, the Popslate is mostly for deocoration — you can display your Instagram images, photos from your camera roll, or choose from a community of images and graphics via the app on the iPhone. But it's easy to see the potential of something like this, especially if it were integrated in a more fashionable or useful case design. It doesn't take a huge leap of logic to see this built into a Mophie-style battery case that not only recharges your phone, but also provides information without having to power your display on. Maybe then we'll get our smartphones to last multiple days between charges.

The Popslate is available for order from the company's website starting today, with broader retail availability planned for later this year.