Just buy an Up2

After months of delays (that didn’t go unnoticed by customers), its latest flagship fitness tracker, the Up3, is finally shipping. It’s “the world’s most advanced tracker,” according to Jawbone’s marketing campaign. Put it next to the $99 Up2 or last year’s Up24, and the company will point out that the Up3 contains more sensors, and that those sensors have more advanced capabilities. From a technology perspective, sure, this $179 Up3 is the best device Jawbone has produced. But is that enough for it to stand up against a new wave of competition?

Companies big and small are trying to build the one true fitness companion that wraps around your wrist; on the high end, Jawbone is facing off against Microsoft Band and Apple Watch. On the low end, it’s got companies like Misfit eager to establish a spot. And then there’s longtime rival Fitbit, which recently rolled out its own updated lineup of health trackers. I’ve recently taken a greater interest in staying fit and maintaining some semblance of a healthy lifestyle, so the Up3 arrived at a pretty great time for me. I just wish it were a better product. 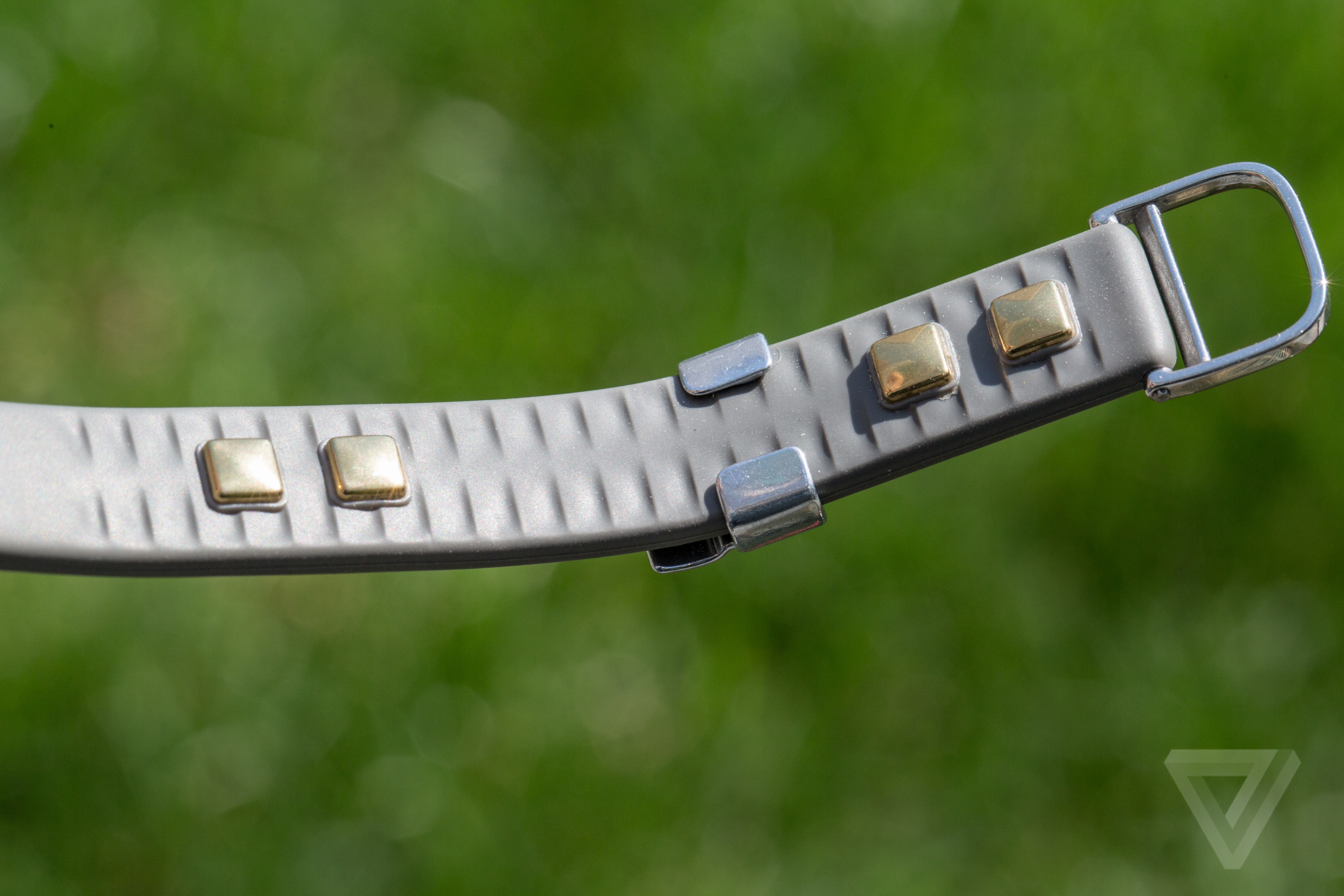 The Up3 features a design that’s not far off from the less-expensive Up2. It’s a bit larger and chunkier overall to accommodate for the added technology inside, but not noticeably so if you’re looking at the thing on someone’s wrist. Most of the Up3’s guts are located inside an aluminum casing that sits on the top of your wrist. The Up3 is splash-proof and safe for the shower, but you won’t want to submerge it. After originally promising that it would be fully waterproof (a requirement for swimmers), Jawbone realized during mass production that it couldn’t follow through and had to go back on its word. The downgrade is disappointing, but you can’t take Microsoft Band or the Apple Watch underwater, either. 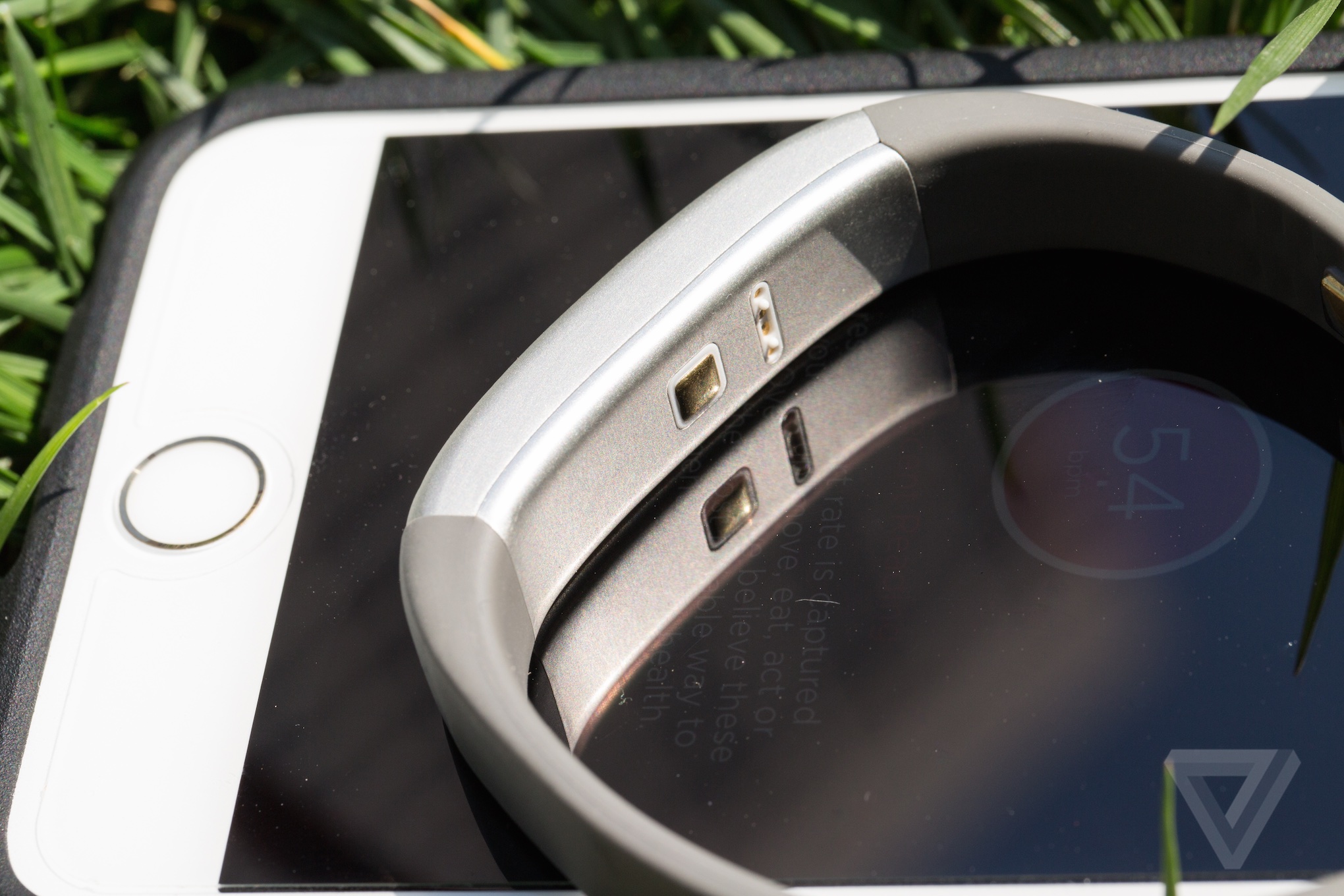 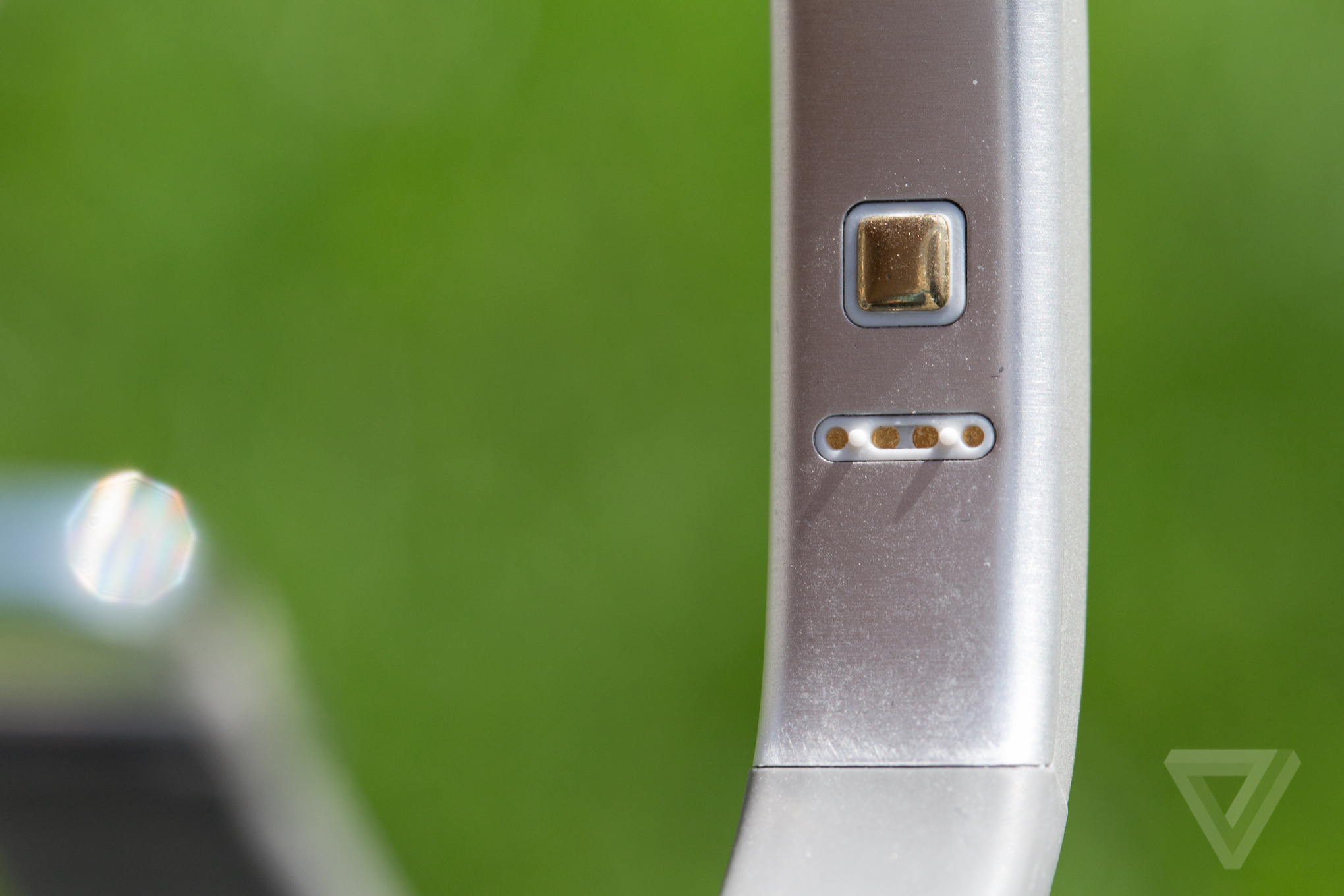 As it turns out, some of the Up3’s most important sensors are actually located on the inside of its strap. Look at the band’s underside and you’ll see a total of five gold-colored squares that make contact with your skin whenever it’s strapped on. These are what separate the Up3 from all the Ups that have come before it. They’re bioimpedance sensors that can measure your resting heart rate and make the Up3’s improved sleep-tracking features possible by monitoring your respiration rate, body temperature, and galvanic skin response.

Showering's fine, but don't take it in a pool

With these, the Up3 can track the stages of your sleep every night between light, deep, and REM. That’s something the Up2 won’t do. Instead, the less expensive model guesses your sleep patterns based on movement using its accelerometer.

Unfortunately, the Up3 has the same poorly designed, awkward clasp as the Up2. Worse yet, it doesn’t even guarantee a secure fit; the Up3 has randomly come loose on a few occasions over the week I’ve been wearing it. It’s never happened while I was asleep, but it still makes me think there had to be a better, simpler way. If there's one plus, it's that you won't be taking it off frequently. The Up3's battery life is exceptional, and it'll last nearly a week on a single charge.

A word of advice on style: go with the black one. Jawbone gave me a gray-and-silver model for review, and I never once received a compliment for its appearance. Like most other fitness bands, the black version won’t attract much attention. But this one? It screams, "Oh, that’s one of those fitness things." 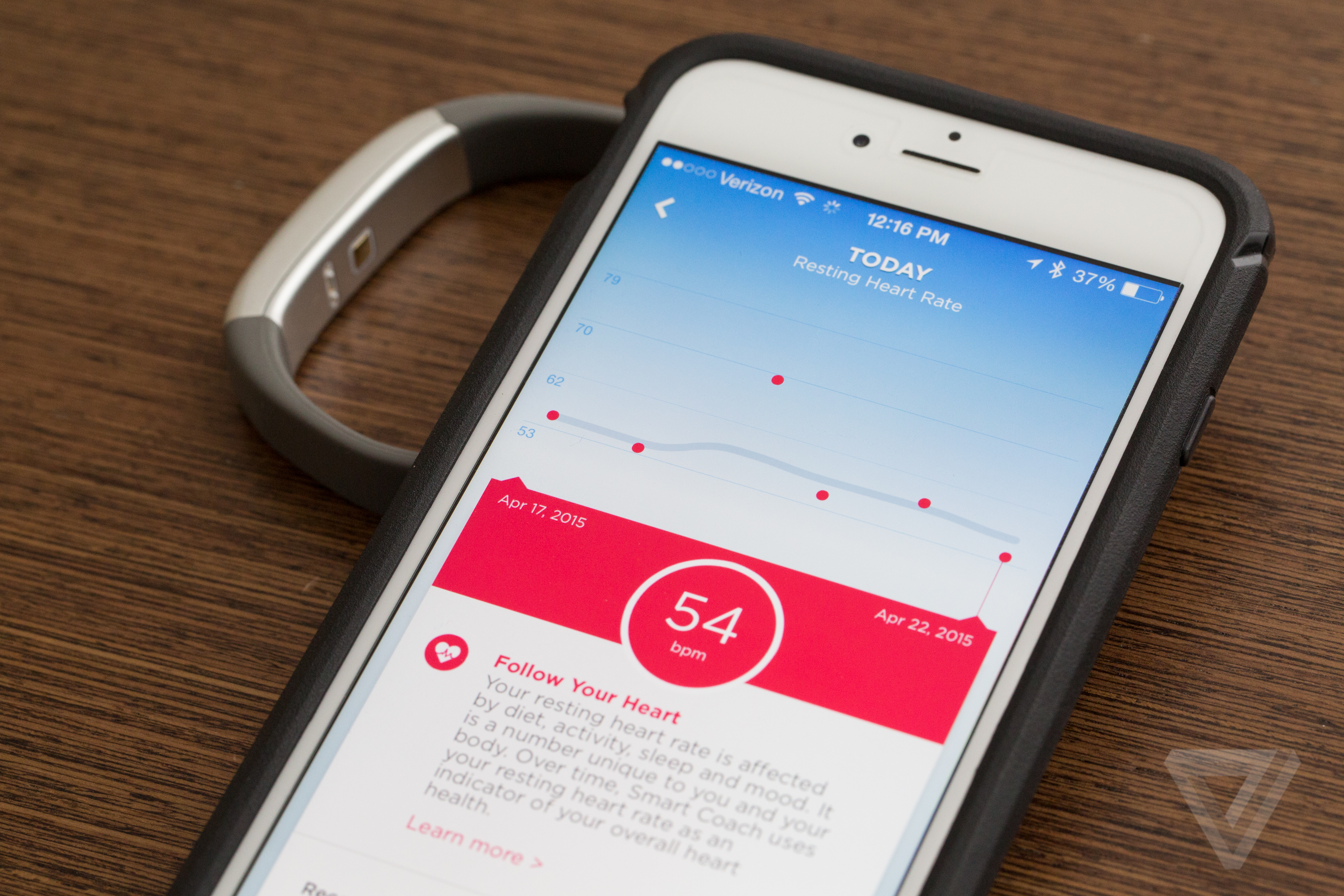 The best thing about this product is Jawbone’s app on your smartphone. I came away impressed with its ability to automatically detect when I’d started working out or fallen asleep. Jawbone does give you the option to manually switch between activity and sleep-tracking modes, and you really should, since it’s the only way for the Up3 to figure out how long it takes for you to fall asleep. 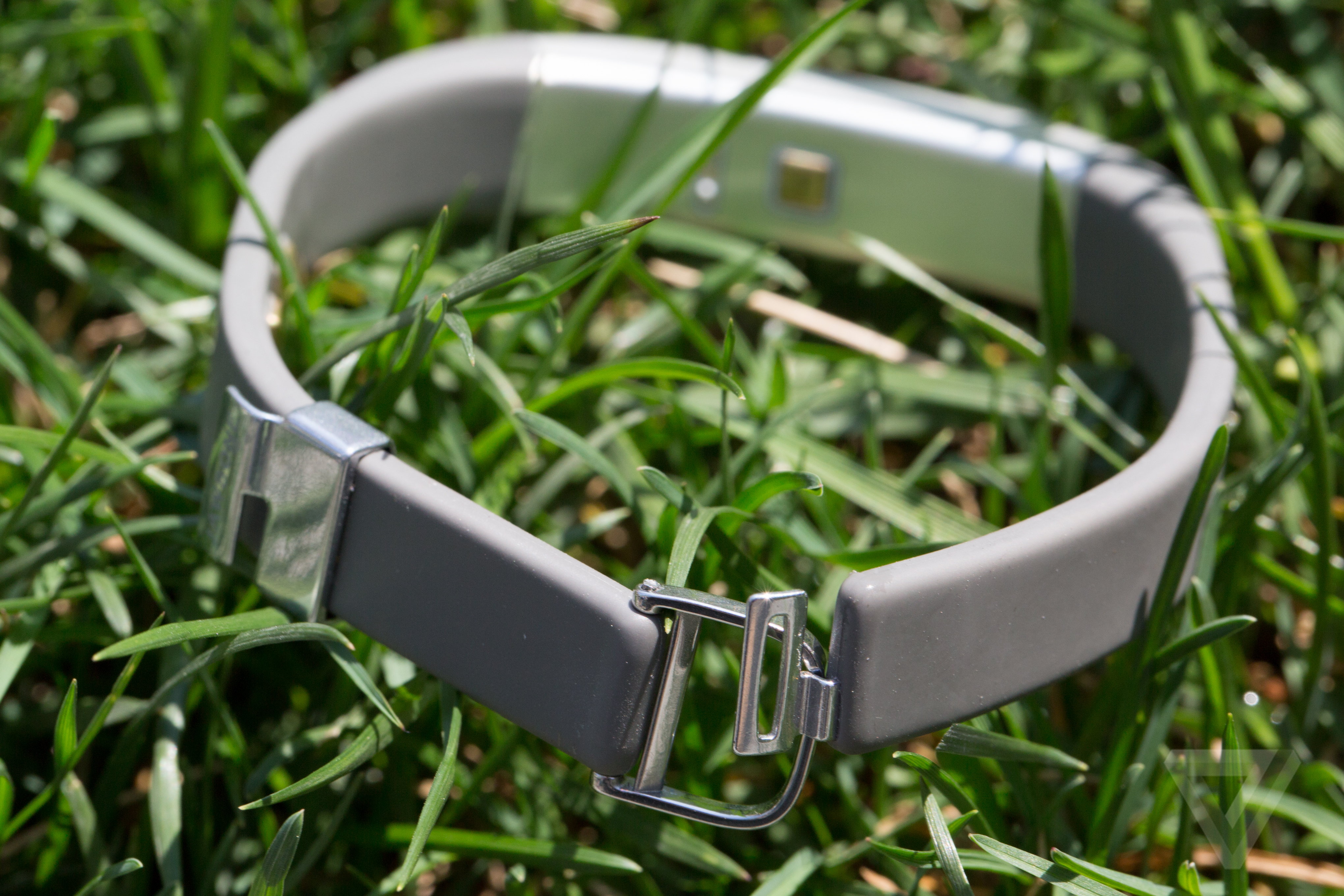 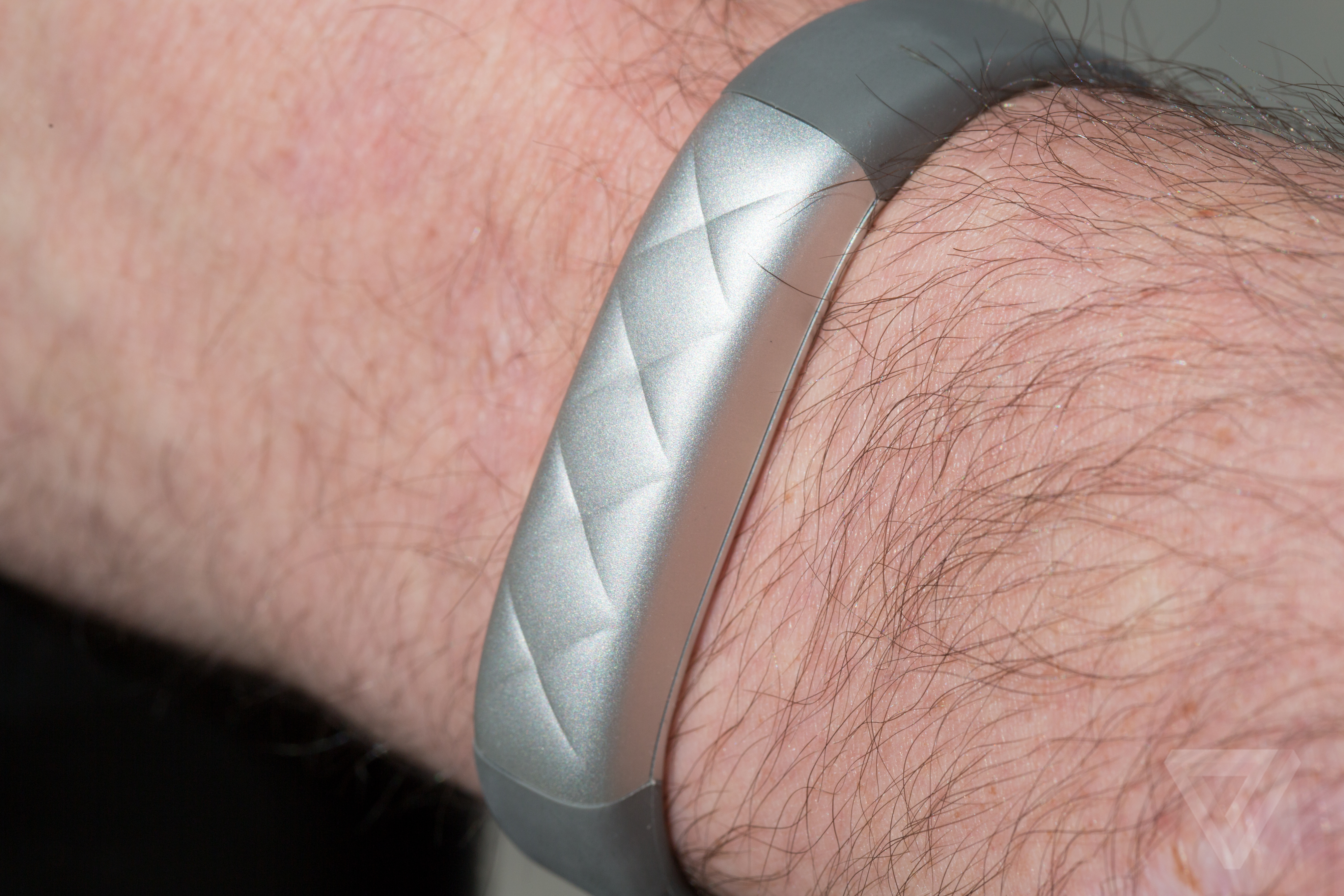 But to make that switch, you have to suffer through a pretty awful user experience. Your physical interactions with the Up3 (and Up2) are based around a bewildering system of taps. Tap twice to wake it up, and then hold to toggle between modes. That’d be simple enough if it worked reliably every time, but I regularly found myself tapping repeatedly to trigger the lights hidden beneath the Up3’s aluminum housing. Too often, it just didn’t register. Next time, they should really put a button on it. Jawbone has told me that the sensitivity around these controls might be fine-tuned in a coming firmware update.

Back to the software: Jawbone’s Smart Coach system is pretty great. After picking a daily step goal (I’ve learned 10,000 takes some effort), you can set progress alerts so the band will vibrate every 3,000 steps or at another interval of your choosing. Smart Coach constantly keeps you updated on the previous day’s progress and how you stack up against the Jawbone community at large. I felt a decent sense of accomplishment after seeing that my daily step average ranks in the top 30 percent; sometimes it’s these and other little messages of encouragement that prove most effective. The system tracks your activity milestones (like hitting 50,000 steps) and pushes you to try a bit harder by entering into "Today I Will" challenges that go beyond your daily goal.

I’m not someone who bothers with meal tracking or logging my weight. I’ve found "don’t eat like an idiot or late at night" is a sufficient strategy, and the process in Jawbone’s app always proves to be too much of a hassle. Thankfully Jawbone’s Up software lets you ignore both of these features entirely, and even better, it won’t pester you about them. I also liked the Smart Alarm option, which attempts to wake you during a light stage of sleep at any point between your target wake-up time and 30 minutes beforehand. 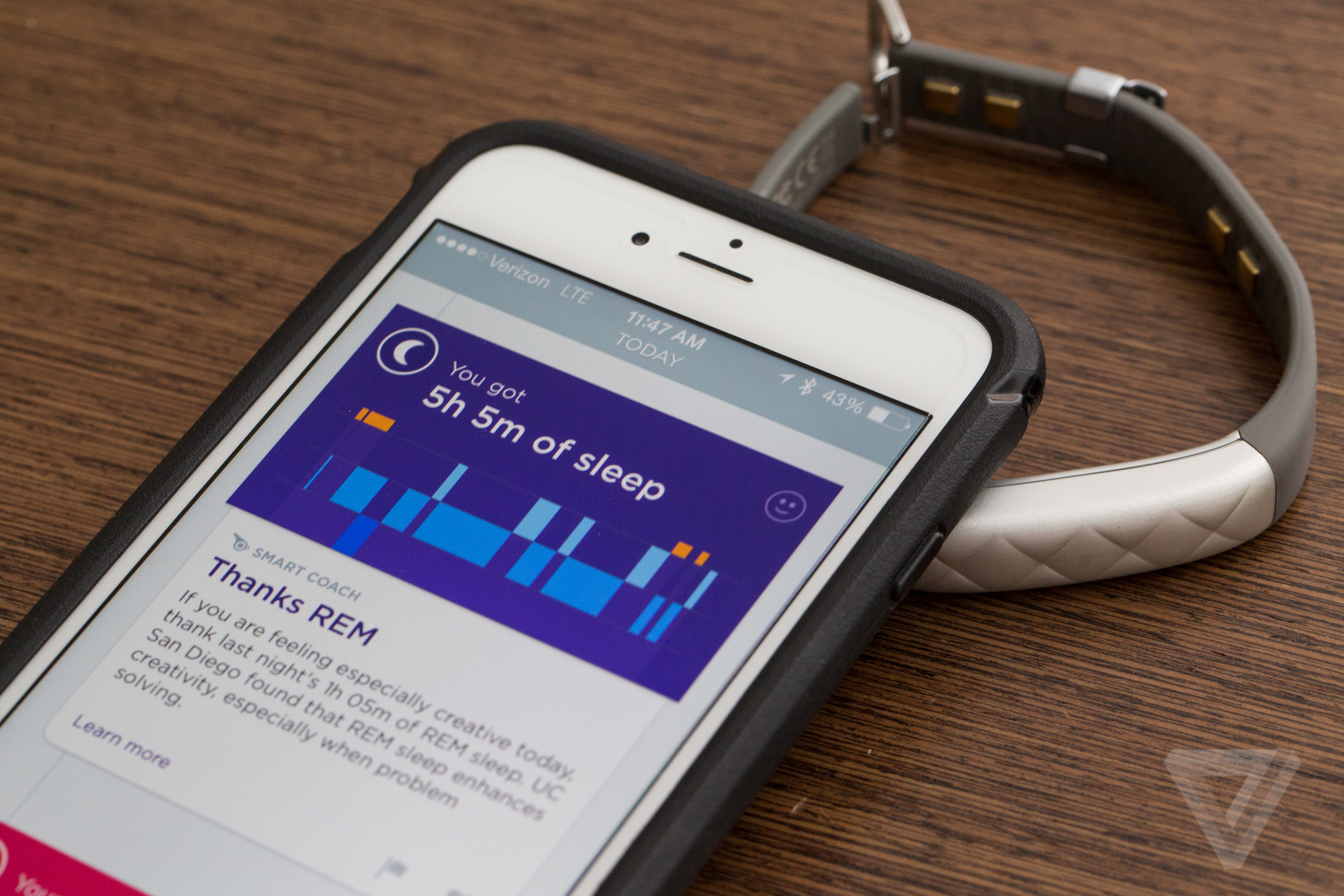 And that brings us to the heart. Initially, I was pretty excited as Jawbone executives spoke about the Up3’s heart rate monitor. Whereas Apple, Microsoft, and most other fitness bands use LEDs and sophisticated algorithms to sample your blood flow and produce a best guess at your heart rate, Jawbone went with the sensors mentioned earlier. It’s a lot like putting your finger on a treadmill’s heart rate sensor; the Up3 "measures the resistance of skin tissue to tiny electric currents," according to Jawbone. But is that more accurate than the path Fitbit, Microsoft, and Apple are pursuing? Well, it’s impossible to know. Right now, Up3 only measures your resting heart rate. And it only does that once a day. One time.

This isn't much of a heart rate monitor

Jawbone’s new flagship fitness tracker can’t tell you how hard you’re pushing your heart during a run or midway through your workout at the gym. It just won’t do it. I even opened up Apple’s Health app, hoping maybe it would pick up a reading as it does for my Polar chest strap: no dice. Measuring your heart rate during a workout is the key thing people expect when they see a fitness tracker has a monitor, and the Up3 just plain can’t do it.

Jawbone’s reasoning for this approach is that your resting heart rate is a good gauge of your overall health. Every morning when you wake up, Smart Coach will reveal your reading for that day. And when it notices spikes or sudden changes, the app will do its best to figure out why. Often this is tied directly to sleep; if Jawbone detects you had a lousy night’s sleep or woke up multiple times, it’ll urge you to head to bed sooner and try for better rest.

During my time with the Up3 so far, my resting heart rate has averaged between 54 and 58 beats per minute. That’s a bit below the wide range Jawbone says is recommended by the American Heart Association (betwen 60bpm and 100bpm). But Smart Coach never explained why. It’s not a big difference, and I attribute it to the fact that I put in 5 miles on the treadmill a few times each week. But right now, Smart Coach just basically says, "Here’s your number," and only puts in extra effort if it notices something irregular. 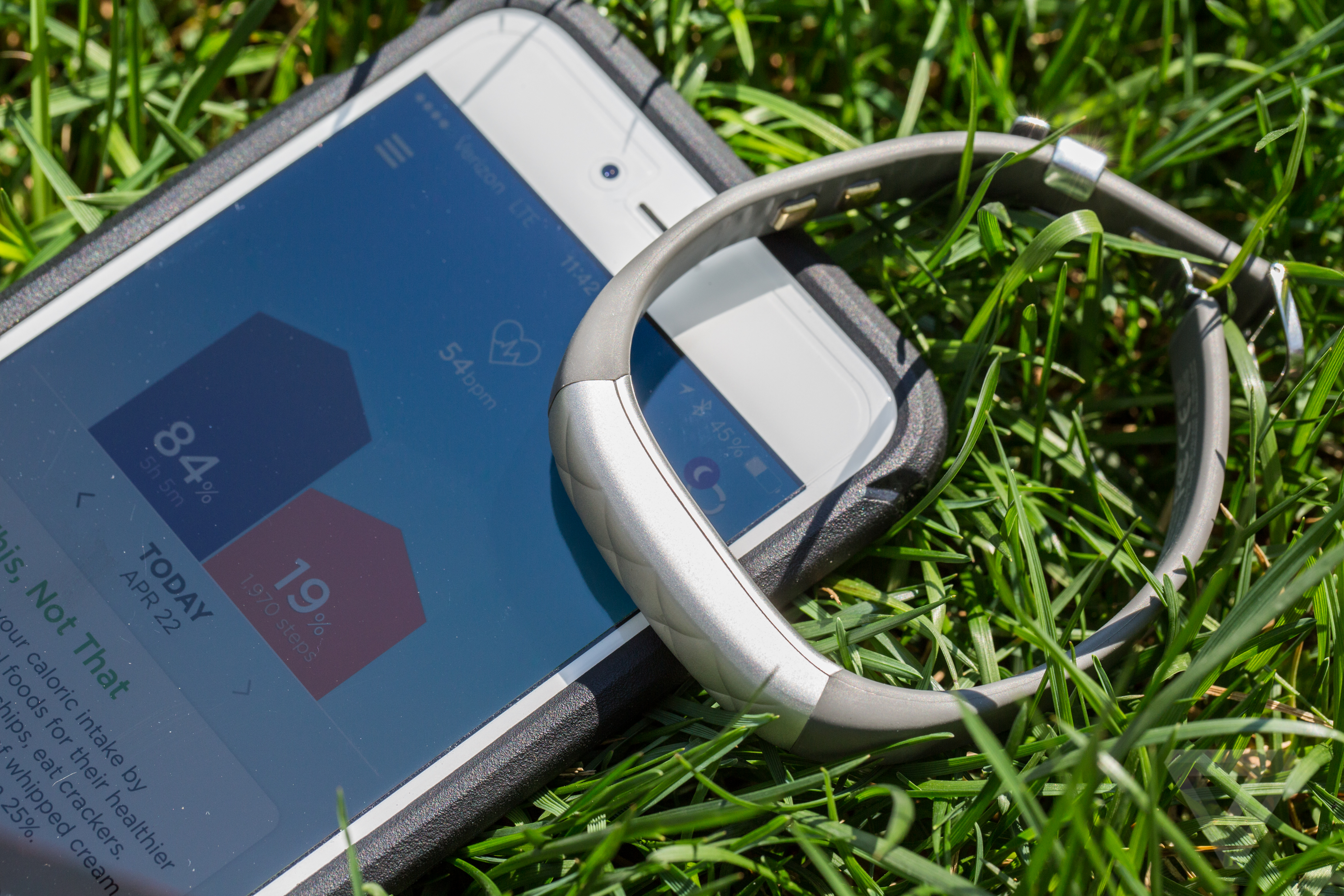 I can’t see how that’s any better than what Microsoft is doing with the Band. Even if accuracy issues remain, I have to give Redmond credit for trying experimental things and pushing forward. Apple Watch’s heart rate monitor is also said to be fairly on the mark, as is Fitbit’s Charge HR. If keeping tabs on your heart rate is important to you, the Up3 just doesn’t seem like the right choice. Hopefully Jawbone will update the device to expand its heart functionality. Otherwise, the best thing about all those advanced sensors is the sleep tracking.

When I strapped on the Up3, I was optimistic this $179 thing could be just what I wanted from "the world’s most advanced" fitness tracker. Jawbone has nailed the software end of things marvelously; Smart Coach can definitely help keep you motivated and aware of how much activity you’re getting in every day. It’s helpful and doesn’t get obnoxious about health advice. That alone is a major selling point. Still, after all the months Jawbone spent working on the Up3, I figured this might be the perfect showcase for that mobile app. It’s not.

Up2 makes more sense for nearly everyone

To be clear, the Up3 isn’t terrible. It’s got all the same activity-tracking features as the Up2 and provides somewhat deeper sleep analysis compared to that $99 product. But it’s by no means worth twice the price. I can’t imagine many people will be willing to spend $180 for a single daily record of their resting heart rate. Is it really that useful of a reference for how your health goals are progressing?

This is a flagship product that can't make a compelling case against a cheaper option in Jawbone’s own lineup. You’re better off with the Up2. It’s a perfectly fine tool for determining whether you’ve moved around enough in a given day. And in the end, the Up3 is really only good for that same exact thing. (Don’t expect much different from the upcoming Up4, as it’s basically this very product, plus an American Express card on your wrist, for $200.) I wanted far more out of this product. Using those fancy sensors to track my heart at the gym or during a run doesn’t seem like too much to ask. Maybe next time.