The best battery case for the iPhone 6

Share All sharing options for: The best battery case for the iPhone 6

We’ve all been there. It’s 3PM, your iPhone is teetering at 10 percent battery, and your friends all want to go out after work, leaving you no time to charge your phone. There’s no way your phone is going to make it. The beads of sweat start to form: “How am I going to sync up with everyone tonight? How will I call that Uber to come pick me up? How will I Instagram my crostini appetizer that never has enough toast?”

This is battery anxiety, and it is real. The iPhone 6 doesn’t make it easy for sufferers of battery anxiety. For many of us, it doesn’t last a full day and it doesn't have as large of a battery as its bigger sibling, the iPhone 6 Plus. But that doesn’t mean all hope is lost. You just need a case that can recharge your iPhone’s battery without having to plug it into the wall.

A battery case will protect your phone from the usual dings and damage of day-to-day use, just like any other case. But when your iPhone is getting low on juice, you can just flick a switch on your battery case and recharge it wherever you are — no hunting for an outlet, no tethering to a desk, no hassles required.

There are a ton of cases that promise to charge your iPhone while providing protection, and they all work in pretty much the same way. You put your phone inside of it, and the case then recharges the iPhone’s internal battery with its own battery. With most options, you can actually double your time away from a wall outlet.

The advantages of having a battery case are many: they eliminate your battery anxiety (or at least extend it until a later time), free you up from being tethered to a wall outlet, and protect your phone from usual wear and tear. The downside is that they make your phone considerably heavier and bulkier, but a good battery case is easy to remove when you don’t need the extra battery capacity. A good case also makes it easy to access the volume buttons and power key on the iPhone and doesn’t block the speaker or microphones. One annoying thing with all of the battery cases is that you need to use a headphone extender to plug in most headphones. Fortunately, all of the cases we tested came supplied with one and most will take Apple’s own EarPods without the adapter. Or you can avoid the problem entirely by using wireless headphones.

With so many options available, it can be hard to find the best battery case for your iPhone. But we’ve done the hard work, and when you factor in charging performance, ease of use, and cost, there’s a clear leader in the pack.

Our review of Incipio Offgrid Express 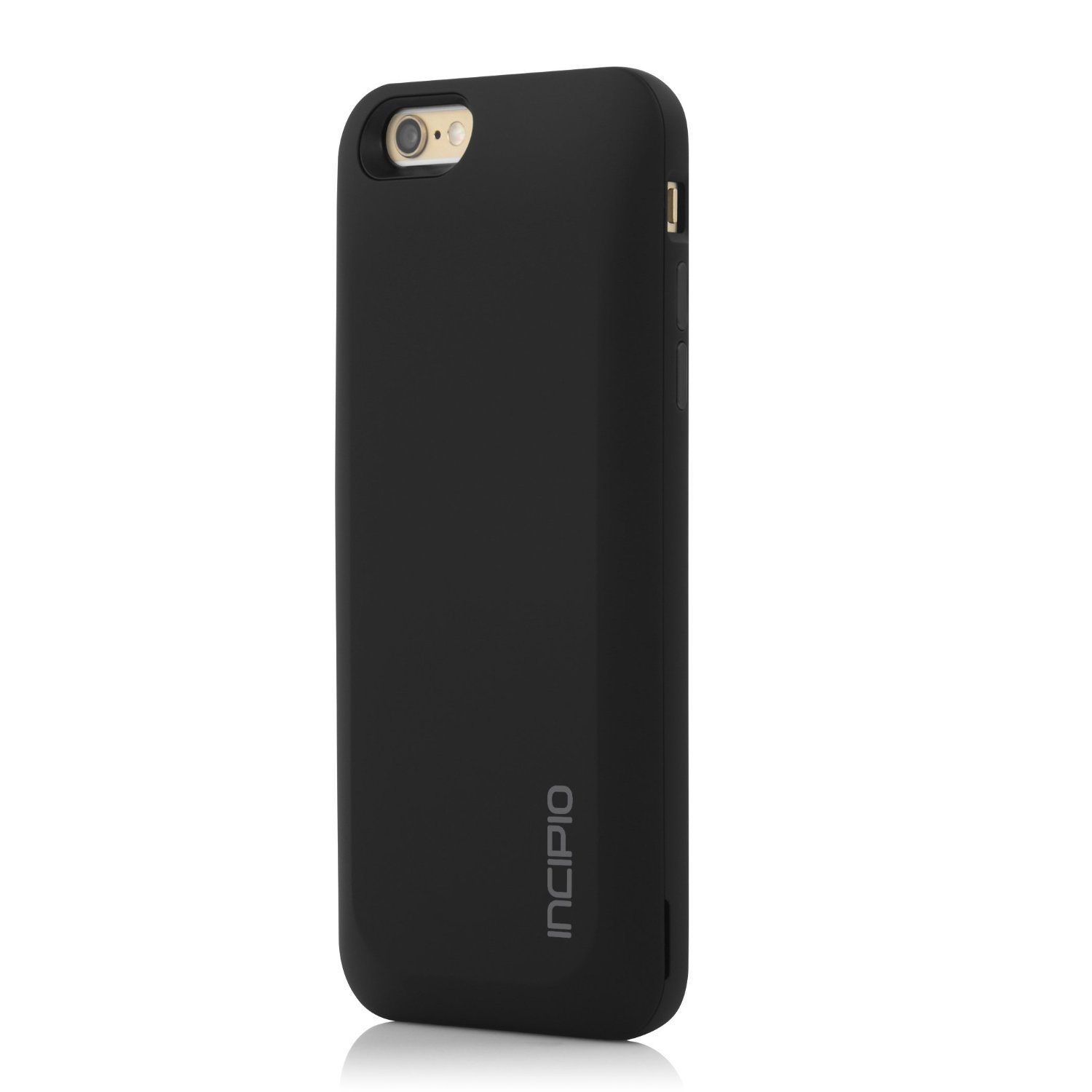 If you’re looking for the best battery case for your iPhone 6, you want the Incipio Offgrid Express. It has a 3,000mAh battery that can fully recharge your dead phone, and then some; a slim, lightweight design; and easy access to the volume buttons and power button, even while wearing gloves. It’s also easy to remove from your iPhone when you don’t need the extra bulk or battery capacity.

The Offgrid Express has a battery meter on the front, which can be used to check how much charge is available. It has four LED lights that are easier to read and understand than the single light that many other cases use. Turning on the charging function is as simple as holding down the button on the side of the case for a few seconds — the same action also turns it off. Your iPhone will go from dead to fully charged within a couple of hours, but you can continue to use it the entire time it’s recharging — a big advantage of using a battery case.

Recharging the Offgrid Express is done with the included Micro USB cable and any USB port (such as the charging brick that came with your iPhone), and the case will charge your iPhone first before replenishing its own battery when you plug it into the wall. You can even sync with iTunes without having to remove the case from your phone. The downside is that none of the Lightning cables you’ve collected over the years will work with the Offgrid Express, but this is the situation with every case we looked at, and Micro USB cables are pretty cheap and plentiful, so we didn’t find it to be much of an issue.

The differences between the Offgrid Express and the many other cases you can choose from are minor, but they add up to a better overall experience. It’s one of the least expensive cases we tested, but it outperformed many of the more expensive options. And it nails all of the key factors you want in a battery case: plenty of battery capacity, easy-to-access buttons, and ease of removal. If you’re looking to avoid that 3PM attack of battery anxiety, the Offgrid Express is the way to go.

Our review of Mophie Juice Pack Plus (iPhone 6) 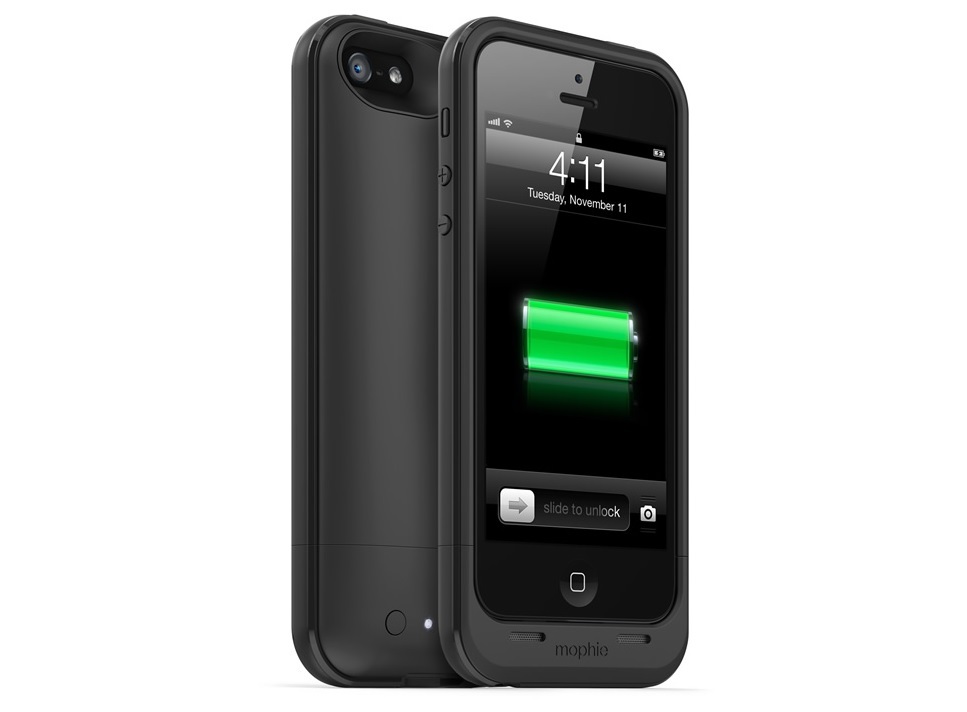 Mophie is the originator of the battery case idea, and its Juice Pack Plus for the iPhone 6 is one of its best cases yet. In fact, it does everything as well as the Incipio Offgrid Express — there’s lots of battery capacity, it has great buttons, and it’s easily removed — but it costs significantly more without offering a much better experience. It’s kind of like the Cadillac of battery cases, but it’s also priced like a Cadillac.

Our review of UNU DX-6 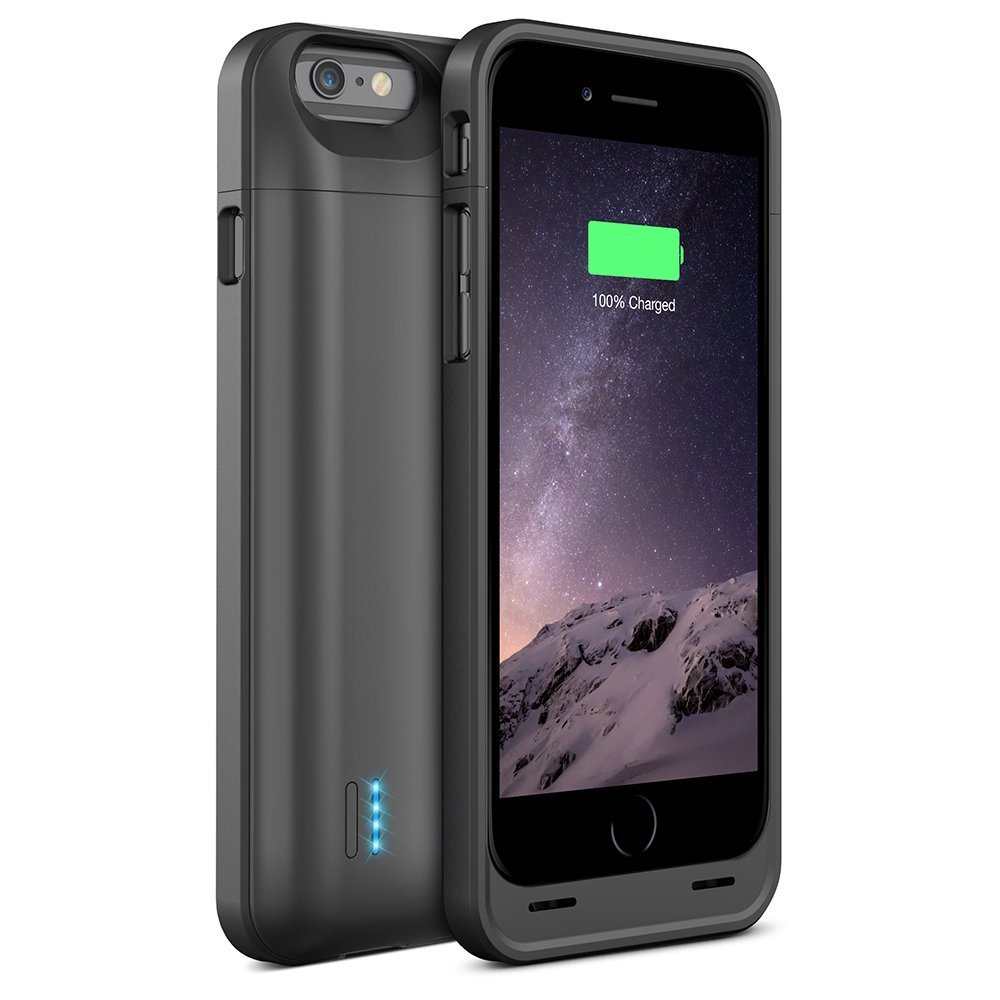 The Unu DX-6 is one of the slimmest cases you can get, and it has enough battery capacity to recharge your iPhone fully from dead. But it’s not significantly smaller than the Offgrid Express, and we found it hard to reach the volume buttons and power key when the iPhone was in it.

Our review of i-Blason Unity Power 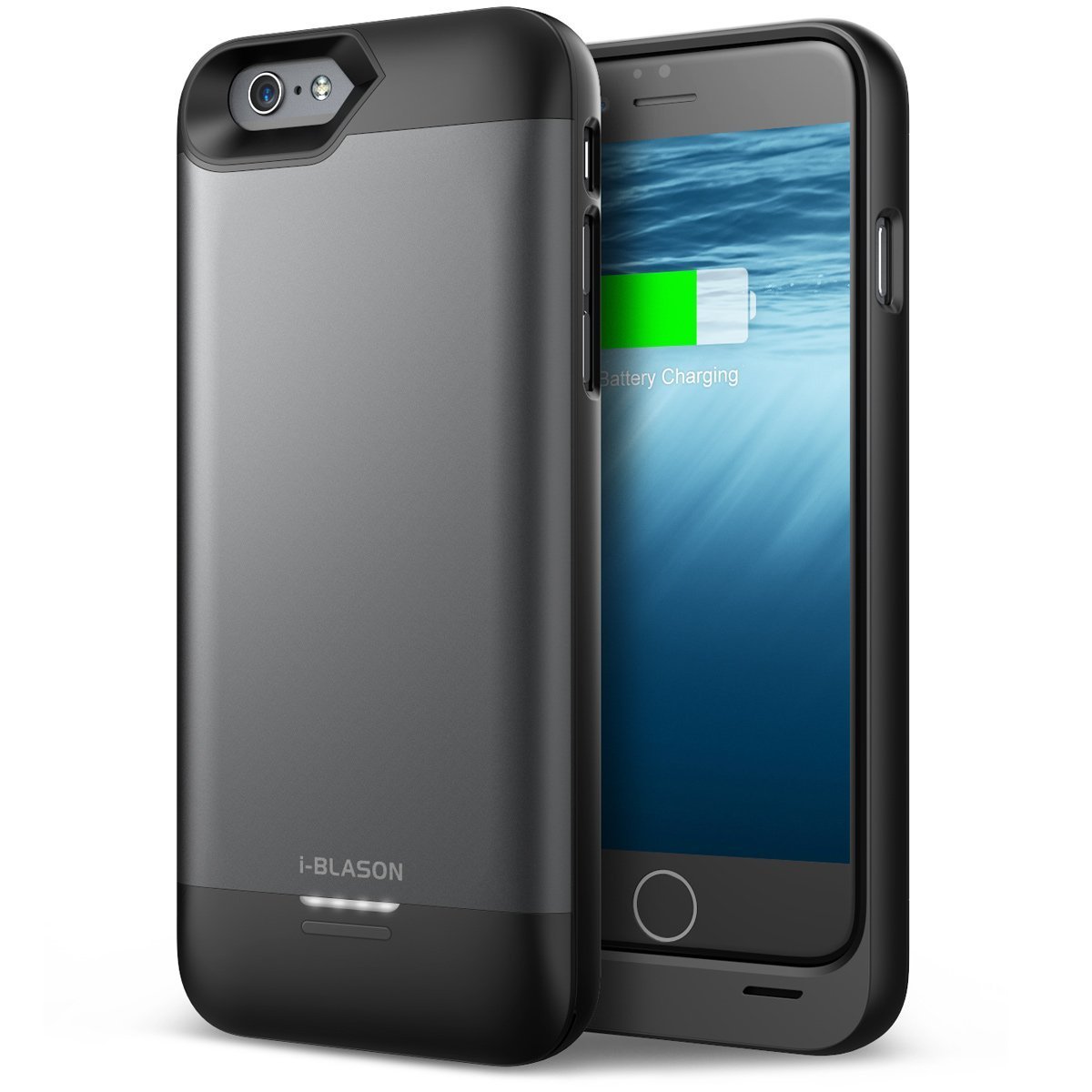 The iBlason Unity Power is one of the least expensive options, and for basic recharging, it works well. It’s not as nicely designed as the Offgrid Express and uses cutouts for access to the iPhone’s buttons instead of our preferred pass-through style buttons. You’re better off spending just a little more to get the Offgrid Express.

Our review of Otterbox Resurgence

Otterbox makes really tough, hardcore cases for your phone, and the Resurgence is exactly that. It’s the most rugged of the battery cases we looked at, and if protection is your number one concern, it’s the one to consider. But as a battery case, it has a smaller capacity; has a chunky, clumsy design; and is really difficult to remove from your phone. 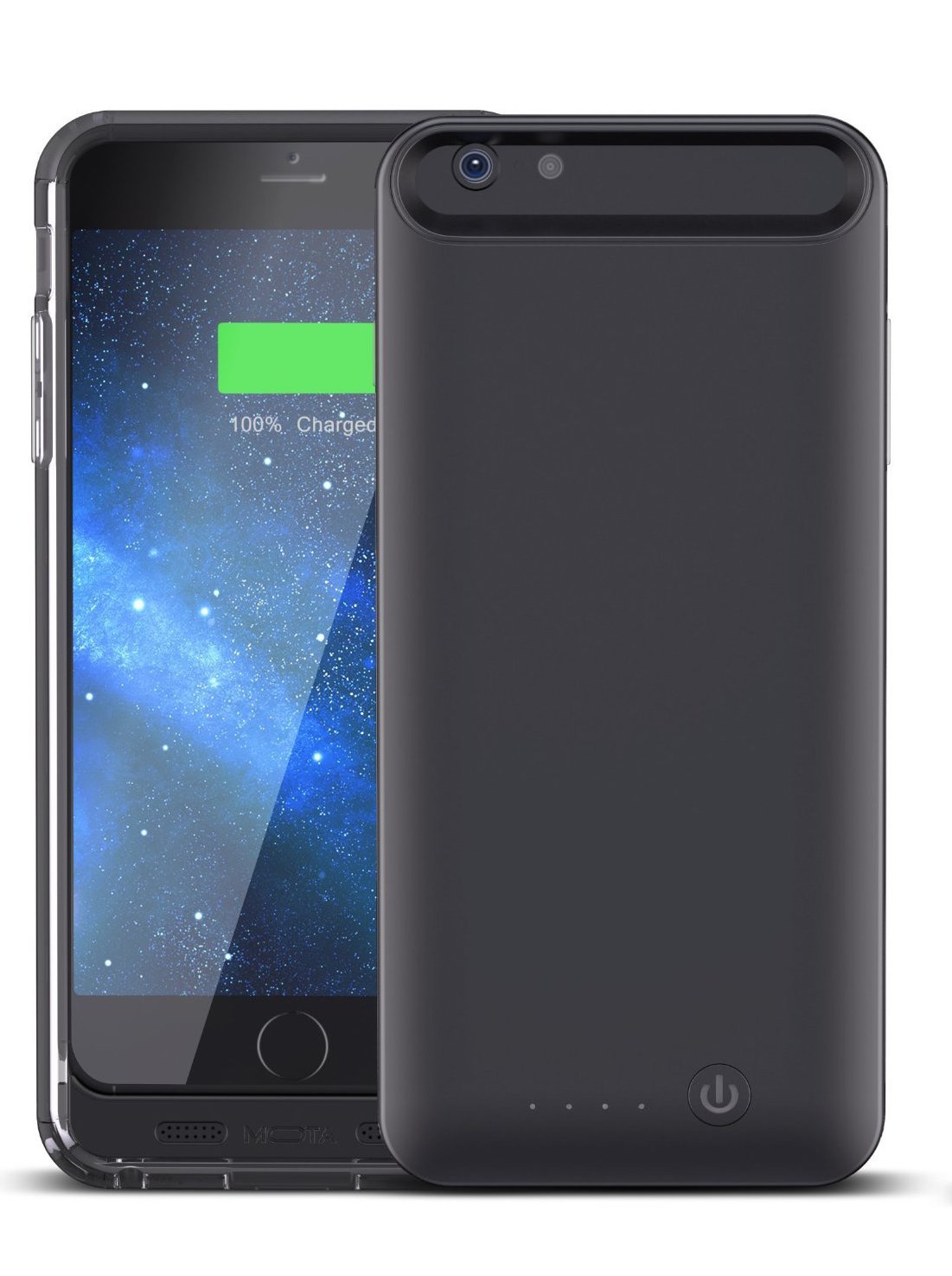 Mota’s Extended Battery Case was by far the cheapest of the field we tested — it can be found for about a third of the price of the Mophie Juice Pack Plus, the most expensive option. But you really get what you pay for here: it has the smallest battery capacity of any case we tested, and it looks and feels cheap. The buttons are especially terrible. Do yourself a favor, and spend a little more on a better case, like the Offgrid Express.