Microsoft stripped out Aero Glass — a transparent and blurry glass effect — from Windows 8, but it looks like it’s making a slight return in Windows 10. Leaked screenshots from Chinese site IT Home reveal that the latest internal builds of Windows 10 include a new blurred transparency effect on the Start Menu. While this doesn’t extend to app windows themselves, the glass effect looks identical to the Aero Glass used in Windows Vista and Windows 7. It’s only applied to the Start Menu, and the transparency effect is removed when the Start Menu transforms into a fullscreen Start Screen.

With just a day until Microsoft’s Build 2015 keynote, it’s clear the software maker has plenty of UI tweaks to reveal. In other Windows 10 build 10102 screenshots, you can see changes to Live Tiles. A new 3D flip effect is present, in what looks like a move away from the flat Metro-style flipping Tiles of the past. It’s subtle, but an animation change that matches the pop effect of the Start Menu itself. Microsoft is also greatly improving the UI of the Cortana digital assistant. Cortana is now more closely integrated into the Start Menu search experience, and it now features a hamburger menu to access settings and options quickly. The black and white aspects of Cortana match the theme changes Microsoft is making to Windows 10. 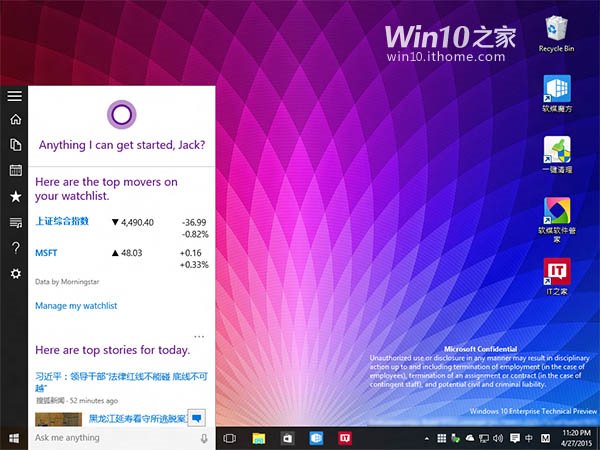 While these are mostly minor changes to Windows 10, they do demonstrate that the operating system is far from complete. Microsoft has promised to deliver a final version of Windows 10 in the summer period, and AMD’s CEO recently hinted that it could arrive in late July. Microsoft is planning to detail its Windows 10 plans at its Build 2015 developers conference tomorrow. The Verge will be live blogging Microsoft’s most important keynote of the year starting at 11:30AM ET tomorrow morning.