Sometimes, the development of a game threatens to overwhelm the game itself. You can't talk about Duke Nukem Forever without talking about its many years of gestation, and for a while it seemed like the same might be said of Broken Age, a classic-style adventure game from Tim Schafer and his studio Double Fine. Broken Age was the original Kickstarter blockbuster. The campaign launched in 2012, and the studio was initially looking for $400,000, but the game eventually raised more than $3 million through crowdfunding as fans clamored for a return to the long-dormant genre.

With more money came more ambition, and Broken Age eventually grew into a much bigger game. In January 2014, it finally launched, but not all of it — in order to further fund development, Double Fine decided to release the game in two acts, so that sales of the first could further fund the second. Today the game is complete, and you can finally play through the entire, heartwarming adventure from beginning to end. And while the protracted development may have initially overshadowed the game, now that it's finished, one thing is clear: we've gotten exactly what we were promised when Double Fine Adventure raised all of that money way back in 2012. And that’s both good and bad. 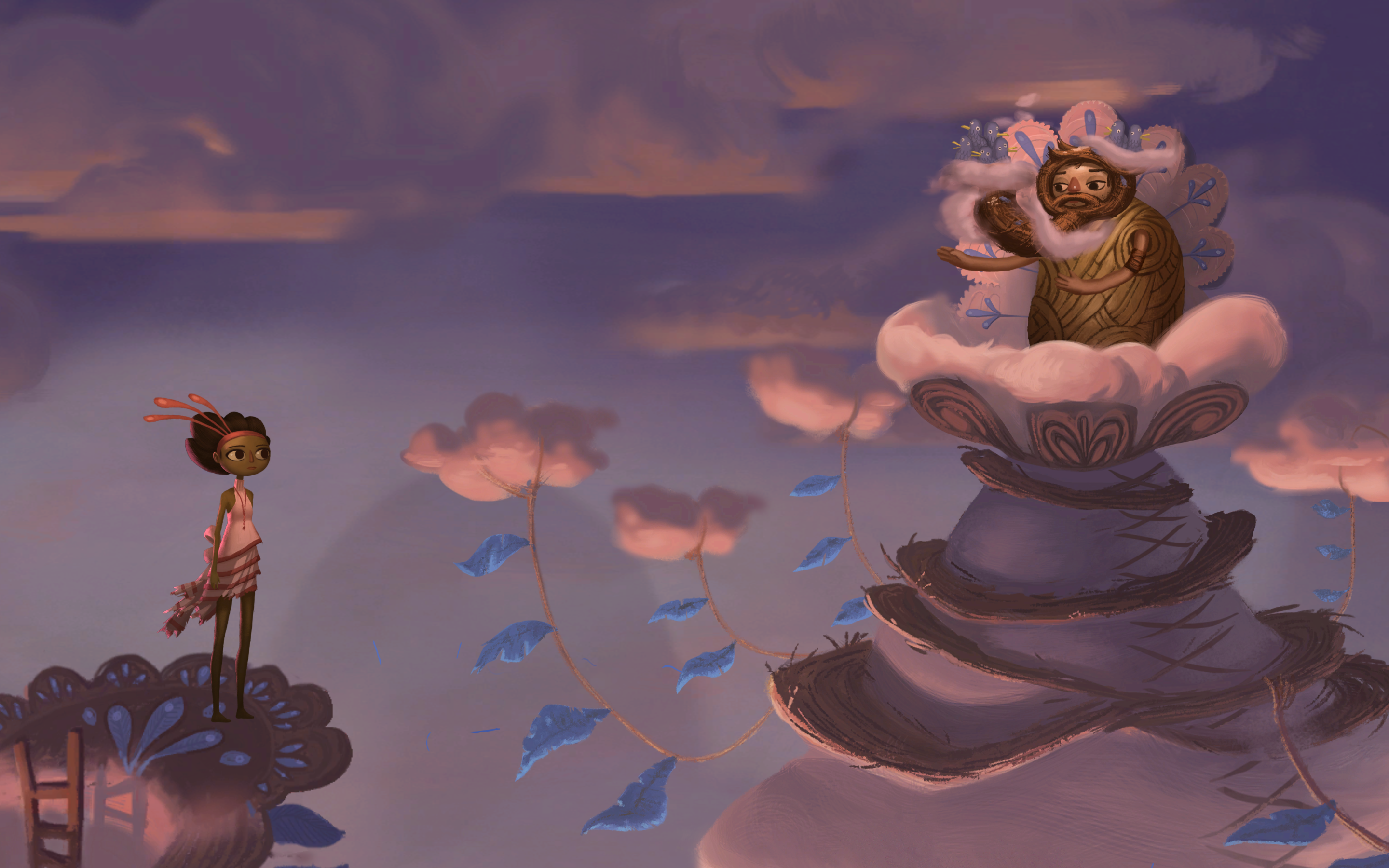 If you played the first half of Broken Age, you'll know exactly what to expect. The game plays like a traditional point-and-click adventure in the mold of Monkey Island or Sam & Max. These games aren't about action, but instead focus on dialogue and puzzle solving. Broken Age doesn't break out of this formula in any real way, but instead updates it with adorable art and wonderful, witty writing. The game stars two characters, who you can switch between at any point in the game: Shay, a coddled space explorer who goes through the same routine every day, and Vella, a young girl saddled with the "honor" of being sacrificed to a giant monster.

Act one ended on a somewhat shocking cliffhanger, and it's been a long wait to see just how things play out (you’ll probably want to replay the first part before diving into act two). The two characters' stories intersect in surprising and fun ways and — spoiler alert — the second half sees them swap places, with Vella stuck on the spaceship and Shay sent out into the big, wide world for the very first time. What's most interesting about the game's story is that, even though it is incredibly crazy and at times nonsensical, I was invested the whole time. There are a number of mysteries at the heart of Broken Age — why people are being sacrificed, why Shay was kept captive on a spaceship, and how all of these elements connect — and the answers are all satisfying, and kept me pushing through to the end. The second act also takes some darker turns, so the goofier elements, which include harp-playing robots and trees that vomit sap, do a great job of lightening the mood.

But while act two does bring the story to a satisfying conclusion, it's also a showcase for the pitfalls of adventure games. Namely, it feels padded with tedious, and often annoying puzzles that can leave you scratching your head. Worse still, some of the more obnoxious puzzles are repeated multiple times; one particularly tricky puzzle has you re-wiring robots using a trial-and-error system, and when you get the correct answer, you’ll need to remember it to use later in the game (you should definitely keep a pen and paper handy for the game's last section). Since there's no hint system in the game, your only options when you’re stuck are to hope you eventually stumble across the right answer, or to go online and find the solution. In order to complete the game I had to use both options, and neither were particularly satisfying.

This kind of design is a holdover from the earliest adventure games, and it hasn't exactly aged well. When I replayed the remastered version of Grim Fandango, also from Double Fine, I lamented that the developers hadn't added in some sort of hint tool to make the more onerous puzzles less frustrating. And that was for a game made in 1998. For a modern successor like Broken Age, not having a hint option just feels antiquated. Most players will end up using a walkthrough anyway; why force them to leave the game to do it?

Broken Age was originally billed simply "a classic point-and-click adventure" — and that’s exactly what we got. It has all of the clever writing and focus on dialogue that has made the genre so beloved. It even has some modern touches, including a ridiculously charming art style that literally puts a face on almost everything in the game, from spoons to elevators. Seeing a smiling fork warmed my heart every time. But the game is also saddled with frustrating puzzles, particularly toward the end.

You should still play it, especially if you long for the glory days of LucasArts, but just be sure to keep your laptop and a game FAQ handy.