The end of the carousel: What do we want from Mad Men’s final episodes?

Sticking the landing on a show about constant change

Share All sharing options for: The end of the carousel: What do we want from Mad Men’s final episodes?

When Nic Pizzolatto decided to end the highly scrutinized eight-episode run of True Detective's first season with what was essentially a high five, the internet community of television obsessives (see also: the internet) cried foul. How could a mystery this pitch dark and paranormally tinged — the antlers, the pedophilia cult — all end with male bonding? Who knows what we wanted out of the end of that show. (I'm using the royal We; I wanted a space vortex and I got it, so I've been loving life for the past year.) What we did know is that this was the kind of show that had to stick the landing. There were too many moving parts, too many signs and symbols and trails of breadcrumbs we had followed; we needed to see it all snapped back up so that we could be assured of order and purpose in this fictional world we had invested two whole months in.

It was a mini-flashback to the mid-aughts' crop of loopy, conspiracy-driven shows like Lost and Battlestar Galactica — that frenzied kind of analysis that scrutinizes the trip but only insofar as it informs the destination. The nice thing about these shows falling out of vogue, supposedly, is that sticking the landing on more conventional serial dramas isn't so much a technical feat as it is an emotional one. And emotional satisfaction, unlike jokes and mysteries, has a much blurrier scale of success.

Mad Men is a show about the trip

Mad Men is a show about the trip; it's barely even about sub-destinations within the trip. Like life, at any given point in any given season we're seeing the builds and decays of so many arcs and relationships at once that the overall impression is that of a straight line. The ads for its final half season hail it as "the end of an era," but if we've learned anything from its seven-plus-year run, it's that something so discrete as an "era" doesn't really exist. The '60s will run into the '70s, and only in hindsight will we decide that there was a clear line of demarcation.

Nowhere is that more clearly demonstrated than through Jon Hamm's perennially falling Don Draper. In the opening of Sunday's midseason premiere "Severance" we find him in such a déjà vu-inducing place (shocking spoiler alert: bourbon, cigarettes, woman in furs, intermittent existential crises) that even a pro-trip viewer such as myself felt a fleeting tinge of regret at having poured so much time into this show. It's only when we revisit more dynamic characters like Peggy and Joan that we are reassured that we haven't just gone in a time warp back to 1960.

And that's the point Matthew Weiner is making, I suppose: everyone else at SCD&P has gone through dramatic changes in circumstance (especially Roger Sterling's upper lip) except for handsome enigma Don Draper. Don is trapped in stasis because of his lack of connection to his colleagues and family; as everyone gets swept up by one of the most earth-shattering decades in modern history, he's left in the dust. Part of me can't help but feel like that's a cheat; a way to retain the viewers who are just into the show for the retro fashions and antiquated cocktail recipes. By keeping Don Draper staunchly in his midcentury happy (or sad) place, you can still keep the cocktail app updated, you can still sell the limited edition Banana Republic line. 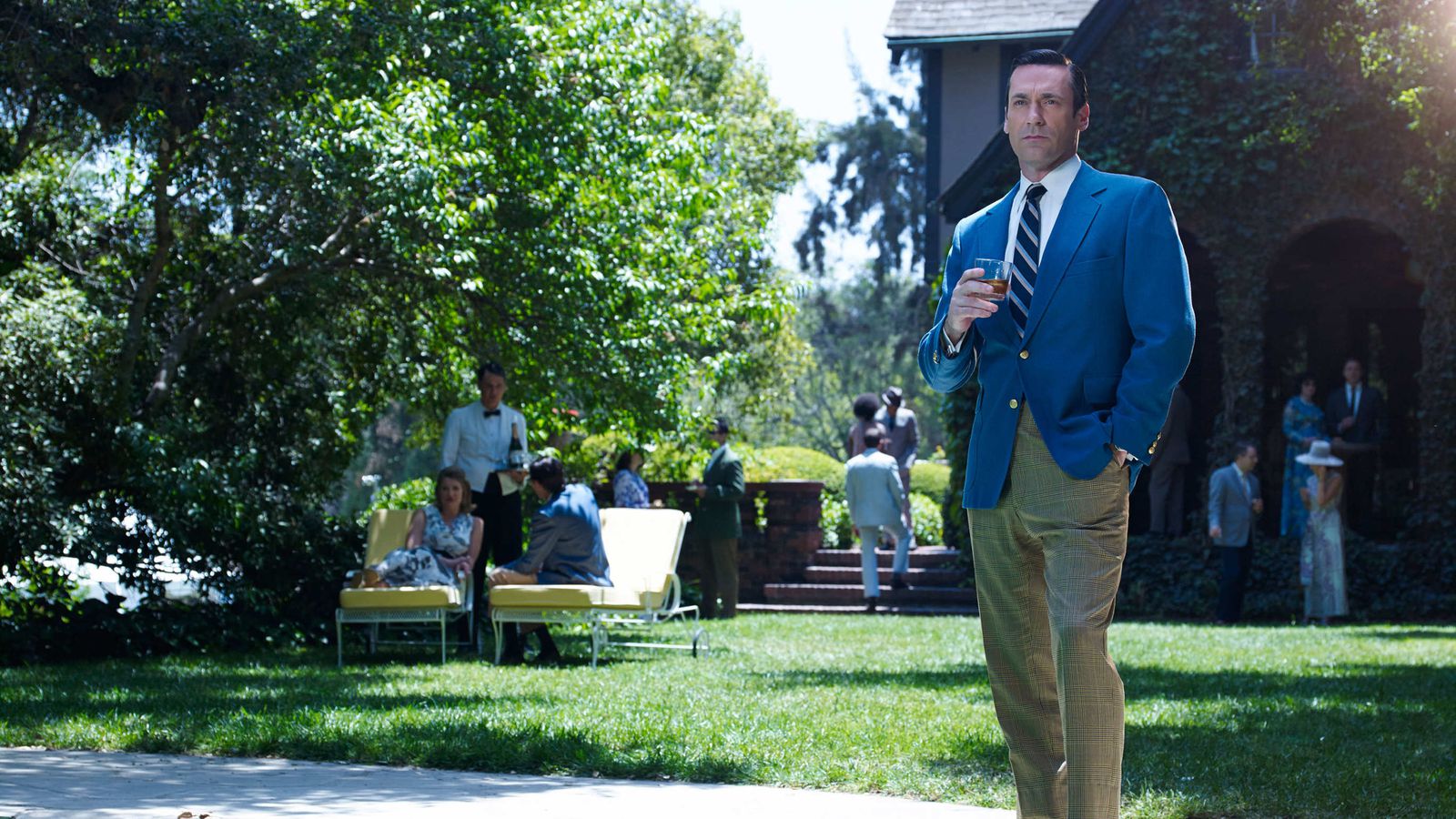 That's always been a part of the disconnect of Mad Men for me; it reels you in with pristine, museum-like nostalgia (and still, after all these years, has that awful, canned-sounding jazzy filler music running under the office scenes) while insisting all the while that it's a show about our shared existential nothingness. In "Severance," the semi-return of one particular character from an earlier season only underlines this. When people fall out of Mad Men's central orbit, it is without fanfare, when they return, it seems as unremarkable as running into an old acquaintance at the supermarket. Mad Men's whole point is that there is no point, that we're all just slides on a carousel going round and round until we get burnt out or hang ourselves on our office door. People don't change, time passes, and then you die. Which, after this many episodes, is a little like having a friend who got super into existential philosophy in college who's on the cusp of his '30s and still reminding you that there's no point to the rat race (insert mind-blown emoji.) "Okay, I believe you!" you want to tell that friend, shaking his shoulders. "But what else you got?"

When people talk about the satisfactions of Mad Men, they talk about the trip; they talk about going back and watching season one and marveling at how different everyone is. But that should be a bare minimum for a serialized television show; that should be the bare minimum for a daytime soap. And if that's all you want from Mad Men — different stuff happening over time — then you will probably find "Severance" compelling. You will remember that at the end of season 7A, quite a few of our central characters were about to go through a significant change: after the sale of SC&P to McCann Erickson, those who have a percentage of the company are all millionaires.

And this suddenly places Mad Men in boringly familiar realm: it is now a Rich People Behaving Badly (and sometimes being sad about how rich they are) Show. Mad Men has always been about a certain amount of glamour and material lushness, but now it's been cranked up to the logical peak. It's Mad Men's Gossip Girl season. It's Mad Men's Drake season. At first glance, at least, this is a weird look, for a show that already featured plenty of vice going down in a sprawling Upper East Side apartment. It seems redundant that all of our usual suspects are permitted to sink right back into their old habits, buffered by wads of cash.

Getting a hint of what an unimaginative destination the show might be heading to puts me fondly in mind of Season 6's T-Shirt-Gate, which ended up revealing nothing other than a swath of Mad Men fans' underlying desire for a grand scheme. And I have to wonder if some of that disappointment means that we're all still secretly hoping for a space vortex, no matter how much we tell ourselves we're here for the journey.

Increasingly I realize that when I say "we" I mean people who write on the internet for various media corporations, for whom Mad Men's web of New York / Los Angeles creative offices most closely resembles their own experience. Mad Men has pulled a fun, probably-but-not-necessarily-accidental trick of flattering the people with the megaphones — as white, upper-middle-class people of all professions can attest, it feels good to see something that resembles your lifestyle represented in popular media. It might move you to declare something is "the most important TV show in history." It might also make you expect to be reassured of some satisfying sense of meaning. Maybe Mad Men's last trick will be to leave us, the people who look to it for answers more than anyone else, as unenlightened and unchanged as Don. No lessons learned, and nothing more to recap.