Microsoft has been struggling to explain why its Surface tablet needs a pen. Most 30-second commercials for the Surface involve circling things with a pen, but not a lot else. While it’s obvious you can use the Surface Pen for note taking or drawing, a new Windows app is trying to do something truly unique with Microsoft’s tablets: musical composition.

StaffPad debuted last week as a Windows 8 app, and it’s designed to let composers scribble notes on screen to convert handwritten music into a typeset score. While the recognition is impressive, you can also quickly edit, playback, share, and even print the score. It’s targeted at musicians, and it’s already being described as "groundbreaking" by professionals who have been waiting for a music handwriting app that actually works. A lot of composers still use pen and paper, so a digital alternative is appealing. While there have been a few iOS apps that have promised similar things for the iPad, the lack of a native pen means they’re less accurate and cumbersome to use. StaffPad has been specifically designed for the Surface Pen after years of trial and error. 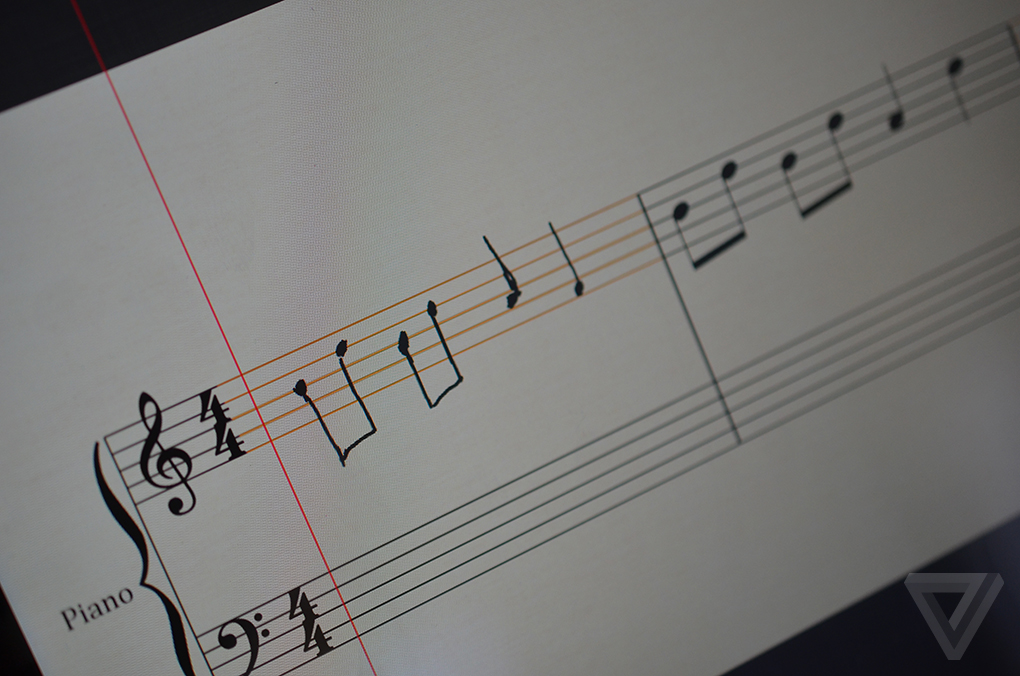 "I love the iPad, but it’s just not the right device for this app."

"I tried really really hard to do it for the iPad when it came out five years ago," explains David William Hearn, co-founder of StaffPad, in an interview with The Verge. "I just realized that if you’re going to do this then it’s only going to be a bit of a toy." Recognition mistakes, performance issues, and just the mix of adjusting for touch-only forced Hearn to look elsewhere. While there are Bluetooth pens, capacitive styluses, and other options for the iPad, Hearn has investigated them and found accuracy issues or just simple lag that kills the experience. "I love the iPad, but it’s just not the right device for this app." After searching around, he found lead developer Matthew Tesch on Google Code. Tesch had an outline of a similar project and the necessary skills to bring it to life with Hearn over the past three years of development.

Initially, the pair focused on Wacom tablets to see what was possible. "We developed a cross-platform prototype for Mac and Windows that you needed a Wacom tablet for," says Hearn. "Just out of the blue, Windows 8 turned up," and Hearn decided to focus on Microsoft’s new OS because of the touch integration. Then six months later, Microsoft announced the Surface Pro tablet with a stylus and it all fell into place. It’s a big risk betting on Windows apps for Surface when it’s not widely used, but Microsoft’s Surface Pro 3 is gaining in popularity and the cheaper Surface 3 model will debut next month with pen support.

This app explains why the Surface Pen matters

I’ve been using StaffPad for the past few days, and it feels like the perfect app for Microsoft to really show why the Surface Pen matters. A technical question from StaffPad to Microsoft’s developer support team eventually led to the Surface marketing team noticing the app, and now the software maker is highlighting it in a new Surface Pro 3 marketing video that does a much better job of explaining the uses of touch and pen on this hybrid tablet / laptop.

At $69.99 StaffPad might sound like an expensive option, and it is one of the most expensive Windows Store apps out there, but it’s a bargain compared to other options. While you can type into music notation software like Sibelius, it’s priced at $600. Other tools are equally expensive, and you could get this app and a Surface 3 tablet for $30 less than the price of Sibelius alone. If you’re a musician interested in the app, I highly recommend Sibelius Blog’s extensive overview of StaffPad.