Exclusive: Google is close to making Android Wear work on the iPhone

Exclusive: Google is close to making Android Wear work on the iPhone

But will Apple let it happen?

Google is working on getting its Android Wear smartwatch platform to work with the iPhone, and it is close to finishing the final technical details, according to a source close to the development team. If Google released it and if Apple allowed it on its platform, it would put Android Wear smartwatches directly in competition with the soon-to-be-released Apple Watch for the first time.

In its current state of development, Android Wear works along with a companion app on the iPhone and supports basic functions like notifications — as you can see in the photo below. As it does on Android, on the iPhone Android Wear also supports Google Now's ambient information cards, voice search, and other voice actions. It should also support some more advanced features with Google's own iOS apps, like replying to Gmail messages. 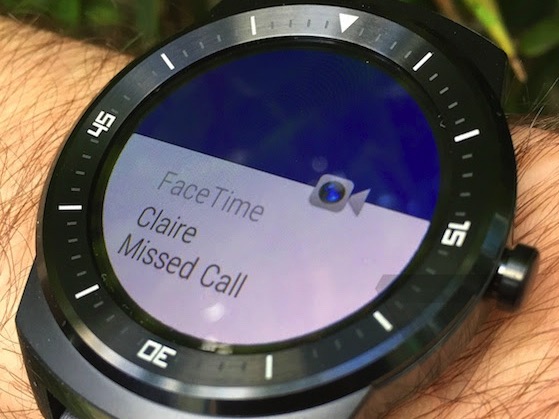 The LG G Watch R with a FaceTime notification from iOS

But beyond that, there are plenty of unanswered questions. Pebble, who makes a smartwatch that works with both Android and iOS, has managed to get features like music control and watch apps working on its smartwatch with the iPhone. So it's possible that Google could do the same.

Some third-party developers have already hacked together a solution that makes Android Wear work on iOS. Another developer has discovered "iOS related code" in Android 4.4 that he believes implies that Google has been working on iOS compatibility for Android Wear. Last October, Android Wear product manager Jeff Chang didn't rule out the possibility that Google could be working on it, telling The Huffington Post that "We always want as many users as possible to enjoy our experience, so in terms of enabling more people to use Android Wear we're very interested in making that happen."

"Apps or metadata that mentions the name of any other mobile platform will be rejected."

But a bigger question is whether or not Apple would actually approve the companion app into its App Store. Certainly it doesn't have much incentive to do so in the middle of the launch of the Apple Watch, its biggest product launch in years. Google and Apple have a history of contentious app approval processes — Google's Voice app and Maps app have had issues in the past — though it's been quite awhile since the two companies have butted heads over apps. But here's another possible problem: way back in 2010 it came out that Apple may reject apps that mention competing platforms. It specifically rejected an app for mentioning Android. The guideline still exists today. Since Android Wear is called, well, Android Wear, that could be a problem.

Apple declined to comment for this story. Google said it "has nothing to announce at this time."

Meanwhile, we've also heard that Android Wear for Android will be getting a significant update in the near future, including support for gestures and Wi-Fi.