In the first two minutes of The Witcher 3: Wild Hunt you witness a horse being decapitated and a crow spear itself through a man's eye. A few moments later you see a naked couple taking a bath together. This is a game that really wants you to know that it is dark, mature fantasy, and it wastes no time telling you that.

The latest entry in the Polish role playing series is essentially what would happen if you mashed up Game of Thrones and Grand Theft Auto. It takes place in a gritty fantasy realm beleaguered by horrific happenings. Not unlike Westeros, here is a place where magic and monsters exist alongside people. Characters die in brutal ways, and seemingly every story has a tragic element. The Witcher 3 is also an open-world game, a huge virtual playground where you can go practically anywhere and tackle things however you like. If the main story doesn't interest you, simply wander off and hunt some monsters in the woods or investigate murders in a bustling medieval town.

But no matter what you choose, you're going to have some fun. 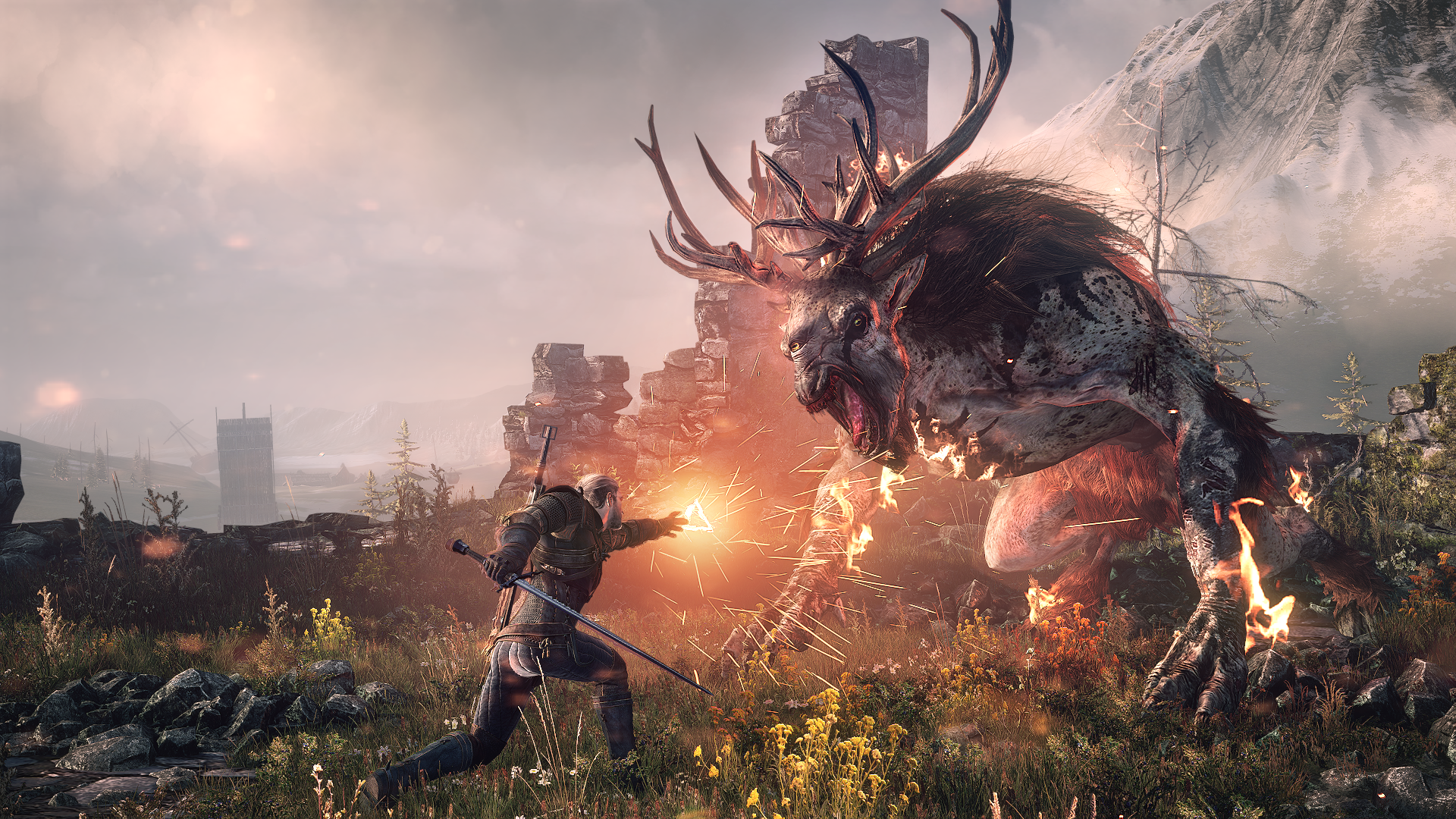 Wild Hunt once again stars series hero Geralt, who comes from a line of supernaturally powerful monster hunters called witchers. He's basically a genetically engineered problem solver: he travels the world aiding everyone, from kings to peasants, armed with magic spells, superhuman strength, and the ability to track like a bloodhound. Think of him as a work-for-hire Jedi who doesn't mind slicing people up with his giant swords. (He carries two — a silver one for monsters and a steel one for regular folk.) Wild Hunt sees Geralt on a quest to find Ciri, his former student, who is being chased by a mysterious, powerful group called The Hunt, for reasons that aren't exactly clear. Over the course of the game, he finds himself constantly one step behind his protégé and her pursuers, venturing from bustling cities to frigid, haunted islands.

Wild Hunt is remarkably welcoming to players new to the franchise

There's a lot going on in the game, as this all happens against the backdrop of a war and a prophecy that the appearance of The Hunt signifies the end of days. There are two previous games and multiple books' worth of backstory and lore, but even still Wild Hunt is remarkably welcoming to new players — don't let that three in the title fool you. I've never played a Witcher game before, and I was able to ease into the world with little problem. There are plenty of optional ways to catch up, whether it's the in-game encyclopedia or just conversations with other characters. But you don't have to do any of this: the core story is simple enough to understand even if you have no knowledge of the game's universe. You might not know every name mentioned, but you'll get by just fine.

Part of this has to do with the way the game is structured. Instead of one giant, epic quest, Wild Hunt feels more like a collection of short stories. Each quest is like its own self-contained thing that also, usually, connects back to the main story. Like in every other RPG, everyone you'll encounter wants something from you, whether it's the mage who can't perform a spell until you find his lost goat, or the townsfolk who won't give you any information until you kill that pesky, hen-eating werewolf. But Wild Hunt feels different because virtually every quest has a fascinating story nested within its objective. You're still doing relatively straightforward things like killing monsters and tracking down thieves, but they always feel like more than simple fetch quests.

Part of the reason is the top-level storytelling, which, much like Game of Thrones, constantly keeps you on edge with its brutality. Even the simplest-sounding quest will have elements of death or betrayal, and even though I eventually learned that bad things would happen basically all the time, these scenes still managed to catch me off guard. In one of the early villages I encountered, for example, a woman asked me to help her find her missing frying pan. I found two corpses while getting it back. And that's just a basic quest, as things get much more brutal from there. There's even a scene that can only be described as the Red Wedding with bears, and it's just as awful as that sounds. Luckily, the drama also lets up every now and then, with some refreshing doses of self-aware humor. While this is a world where corpses hang from trees and stillborn babies can turn into monsters, it's also one where you can have awkward sex with a sorceress on top of a stuffed unicorn. 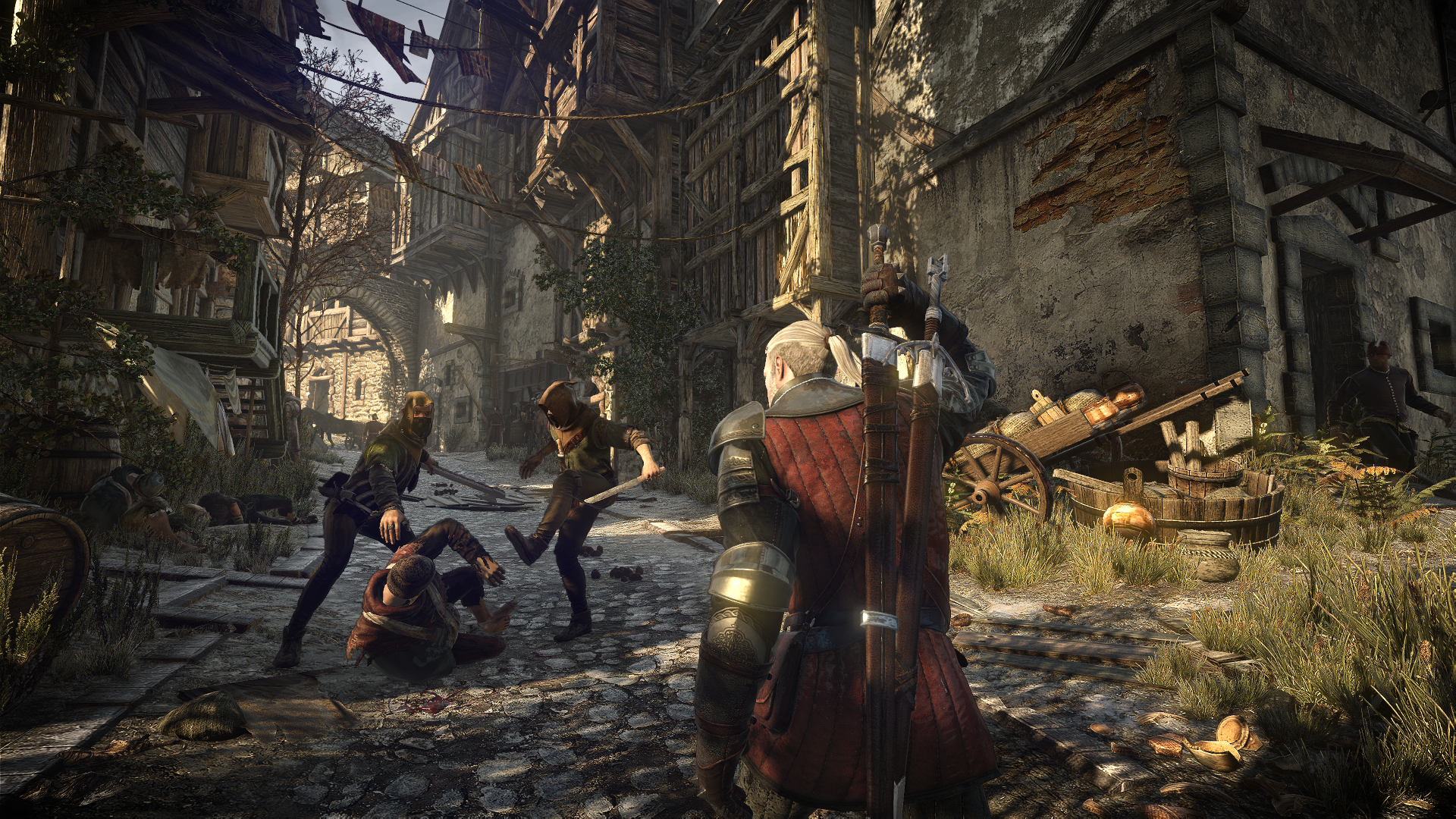 These quests also feel incredibly dynamic. While there is a main storyline to follow, and plenty of side quests that you can seek out by visiting local message boards, the most interesting moments in Wild Hunt are when you find yourself unexpectedly pulled into a brand new story. Just in the course of riding my horse from one town to the next I stumbled across wagons being attacked by monsters, young children orphaned by the war, and even a feeble, dragon-like creature trapped in a cage. I didn't go looking for any of these moments, but they kept presenting themselves, and almost every single one ended up being an engrossing tale that pulled me away from the core story. (They're also mostly optional.) For me, side quests in RPGs are usually just a tool to earn some gold and experience, and I don't think about them much beyond that. But in Wild Hunt, I welcomed them. Every time I started up the game, I was excited about seeing something new or funny or sad.

In fact, the only place the game really stumbled is toward the end, when the focus shifted to the main story of finding Ciri and confronting her attackers, and moves away from the smaller tales. There are some touching, important moments to be found, but the whole thing is drawn out for way too long and just becomes exhausting. Several times I thought the story had reached its climax only to realize there were still multiple hours left to go. In fact, what could be described as the last chapter of Wild Hunt is longer than some entire games.

This is obviously a huge game, but unlike a lot of open worlds, it's also one that feels lively. The developers at CD Projekt Red have spent a lot of time ensuring that it's not just a collection of towns connected by empty space. Even outside of the quests I stumbled across, there was a lot to do out in the world, whether hunting monsters or exploring ancient ruins. The game is so beautiful and so full of surprises, that I rode my horse most places instead of using the fast travel option that lets you zip around the map. I didn't want to miss anything. I absolutely loved just trotting around, watching the sun set and rise over the mountains, lakes, or wherever I happened to be at that moment. It's a nice palette cleanser after dismembering some ghouls in a bloody swordfight.

Of course, like most modern open-world games — whether it's Dragon Age Inquisition or Assassin's Creed Unity — this freedom comes at a price. Wild Hunt isn't the worst offender, but I still ran into plenty of glitches and bugs over the course of my playthrough. Some were just visual, like the jittery goat that was stuck in the background of an otherwise heartfelt cut-scene, or the corpses of slaughtered sirens that would float in mid-air at the edge of a cliff. But others actually made it hard to progress in the game. At one point I was battling a wraith, which would dive into the ground and then pop out for a surprise attack. Problem was, halfway through the fight it decided it no longer wanted to pop out again. Since I need to kill it to fulfill a contract, this meant that I had no choice but to abandon the quest and restart.

I was actually very intimidated when I first started playing Wild Hunt. Not only was I unfamiliar with the franchise, but the developers have said that it can take upwards of 100 hours to complete, depending on how deep you want to dig. That's just a huge number; I love RPGs, but I don't have a few dozen hours to spare. I managed to finish the game in somewhere between 30 and 40 hours, and I don't really feel like I missed out on anything. There was plenty of stuff I avoided — I didn't spend much time on alchemy or crafting, and there's a trading card game I skipped completely — but I’m still entirely satisfied by the experience. The fact that The Witcher 3 feels like a collection of quests rather than one huge epic makes it easier to pick and choose what you want to do, without a terrible case of FOMO.

In fact, I’ve made sure to keep a save file from before the end game kicks in. I don’t need to experience this lengthy game again, but already I can feel the urge to go for a quick horse ride through the forests in the north. The only thing I don’t know is what I’ll find when I get there.