Apparently when he picked the lamest costume at Party City, the new Hamburglar forgot to pick up candles and a cake. The first video, which is being promoted via McDonald's Twitter account, stars the lone ranger cosplayer-turned-McDonald's evangelist in what boils down to 30 seconds about a nagging wife. What?

That's the whole game of the scene, so to speak. The Hamburglar is supposed to be out running errands for his wife — sounds like a birthday party of some sort — but is instead filming an ad for a hamburger. He lies to her about it, which is a weird thing to lie about when you're the hamburglar and leave the house dressed to burgle hams. Also, he never puts his phone on vibrate or airplane mode.

McD's is after me (apparently, so is my wife)! Tweet #RobbleRobble to keep them off my trail. https://t.co/JBVThrmHir

Sigh. I liked him better before the plastic surgery. 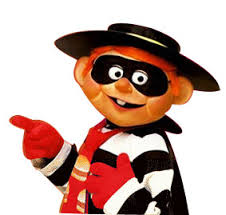 "The clip that was posted to Twitter this afternoon wasn’t a commercial. As part of Hamburglar’s takeover of the McDonald’s Twitter account, the short video shows his double life: grabbing Sirloin Third Pound Burgers while keeping his identity under wraps via a call back to his family in the suburbs."There's also been another video since publish: