We're in the middle of an explanation about the night's next act when a group of men dressed in all black begin making a mesh perimeter around a makeshift catwalk. Holding tall metal poles attached to loose transparent netting, they silently work their way around the crowd. The lights are raised. Music thumps. And out come the drones. Floating up from the dusty floor with the delicacy of a gasoline explosion, they carry garments like a robotic display of dominance. At least until their batteries give out, which happens quickly.

Alas, this isn’t some future hellscape where humanity is being pitted against an unstoppable collective of robots, but the crescendo of Silicon Valley’s inaugural “fashion week." I use those scare quotes because this event is just three days long, and mostly a chance for local companies to hawk their wares and have a big party. Not that either of those is a bad thing.

The drones are here to serve both as a reminder this is not a traditional fashion show, and that we are in the backyard where new technologies are being imagined. Today it's human models. Tomorrow, robots. Or something like that. Basically, people just want to see drones carrying sparkling shirts, and it ends up giving nearly every piece of clothing a kind of wonderful, ghost-like appearance.

You can blame this on Burning Man

The idea for all this can be traced back to Burning Man, says Betabrand CEO Chris Lindland, whose company is responsible for things like the poop emoji button-up shirt and a line of sweat and yoga pants that can be confused with dress attire. It's not the drugs talking, if that's what you're thinking. Instead, about a third of the company ends up going to the week-long annual event in the Nevada desert, or otherwise making specialty clothing for it, but can’t really show off their wares once they’re there in fear of attracting a lawsuit from the gathering's creators. This show is designed to bring those designs front and center, though it has also ended up as a way for other companies to pitch things, which for better or worse (but mostly worse), makes the whole thing skew more on the side of an advertisement than feeling like art or human expression.

"This is not a snooty fashion show. This is really just saying ‘let’s give a fashion runway to the people who would perform at DEMO or TED,'" Lindland says, in earnest. "We’re going to try to conceptualize a conversation around technology and tech products, but give them a runway because that’s a different way to look at them." 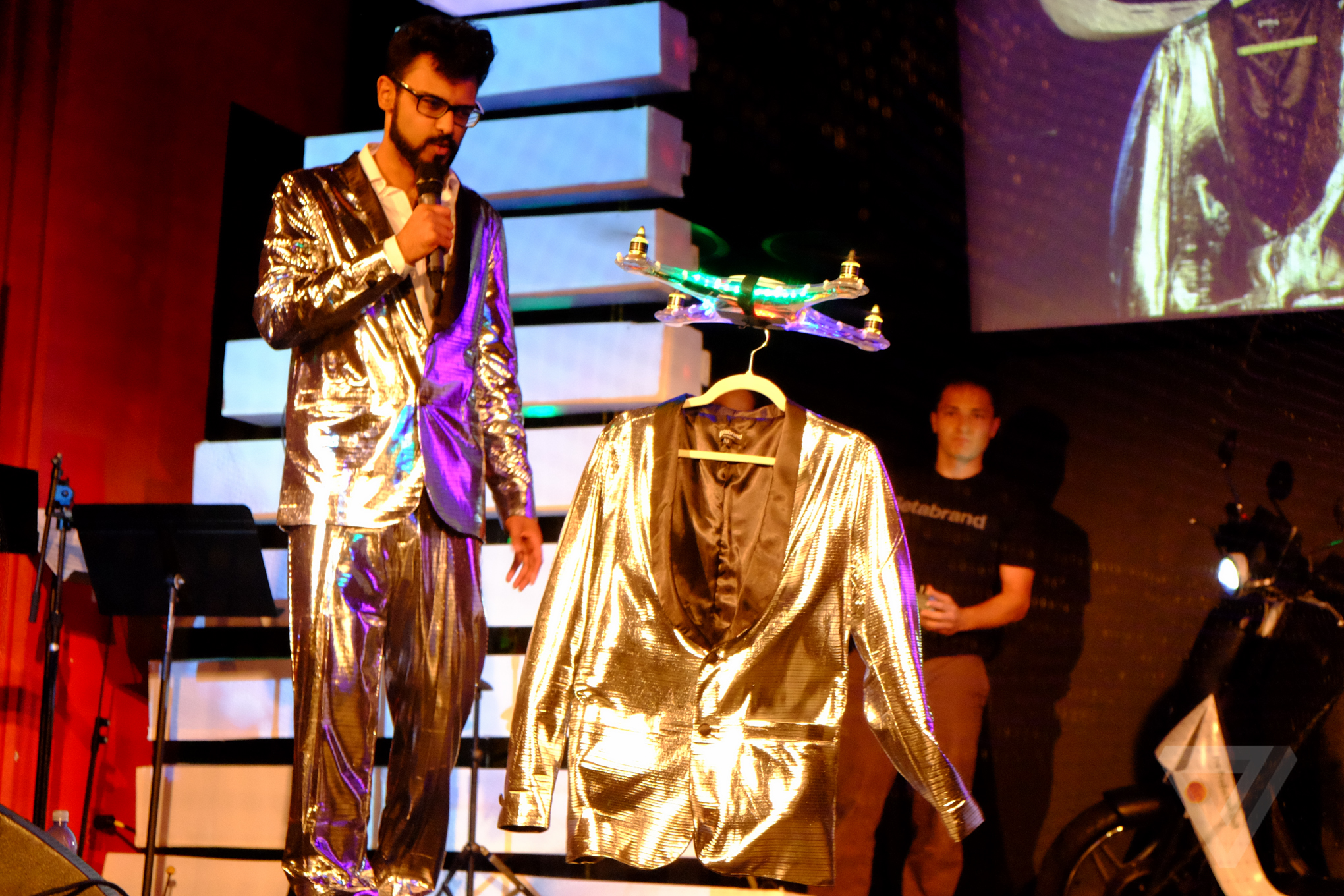 A "disco tuxedo" jacket from Betabrand (which put on the show) rises up from the catwalk via drone.

That may be true, but last night — which is the first night — often feels like an infomercial. The theme is "electric motion," so companies like Torch Apparel are here showing off a bike helmet that has built-in headlights, along with locally based bike electric company Genze, which is here with its $2,999 electric scooter. There are also fitness trackers from Sensilk, which is known for its smart sports bra, and Misfit, which made a name for itself with a disc-shaped health tracker and has since expanded into smart lightbulbs. These items are brought out onto stage, at times being presented like an item on QVC.

Can your pants become drums? Yes, Yes they can

Amid the product pitching, we're treated to some sideshows, including a pair of BMX trick riders, one of whom goes off stage and hits a reporter. The show wraps up with a very talented woman, who artfully climbs around a bicycle on a rope attached to the ceiling. No reporters are injured, though everyone has noticeably taken a step or two back by that point.

Tonight, the drones return yet again, but the theme is wearables. There will be established companies like Pebble alongside brand new ventures like DrumPants, which are just what you think they are. A YouTube video explainer for the pants seems to answer a question few might be asking: could my pants become drums? Yes, yes they can. But only if you’re willing to fork over $139.99 and attach sensors to yourself. A small price to pay, really.

The three-day show culminates in a closing night theme of "crowdfunded fashion," which will include the likes of Ministry of Supply (which raised $429,276 on Kickstarter before getting private funding), Google Ventures-backed digital fabric printers Vida, and several designers who pitched products to be made by Betabrand as part of its own crowd-funding and textile manufacturing program. 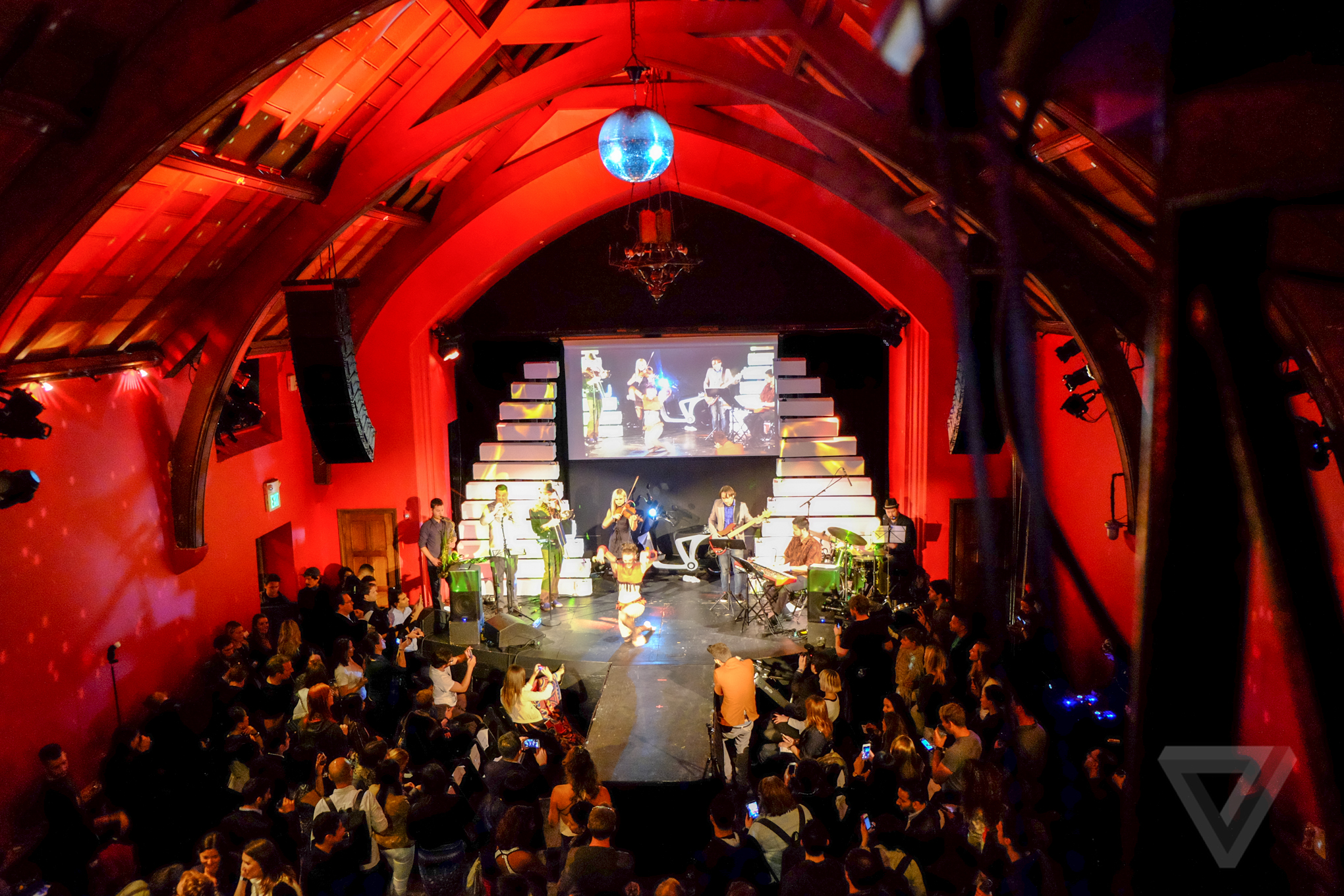 Lindland is not waiting to see whether all of this will be successful enough to do again. In fact, he’s already registered a trademark for "Silicon Valley Fashion Week," in case there are future shows. The 1,200 tickets for this show sold out in three days, with other companies wanting to glom together for a fourth, fifth, and even sixth night. Even so, Lindland says it all still seems highly experimental.

"For us, it’s going to be about handing the designer a mic, and you’re going to learn how and why they make these things," he says. "It will either be a funny flash in the pan, or something we end up doing annually."

And if that's the case, then who knows what it will take to stand out next year? Maybe drone models won't seem that odd. After one night, that already seems to be true.

This is an electric light up hoodie from Sovo Gear. It's lit up with an electroluminescent wire.
Most Popular
From our sponsor
Advertiser Content From