How Periscope should redesign its interface to reduce abuse

How Periscope should redesign its interface to reduce abuse

The first time I used Periscope, I was hooked. It felt immediate and real: I watched my friends as they walked to dinner and went for runs, and I could interact with them, commenting on their stream and hearing them reply. Streaming my own video felt good, too, at least until strangers showed up and started talking about dicks. Each time this happened, I fumbled with my phone, trying to tap the person’s name to block them, but before I could, their name would disappear, and I’d decide to end the stream.

This kind of drive-by harassment, where random users leave abusive comments on another user's live video stream, has been a problem since Periscope launched. It overwhelmingly affects women, who are subject to a barrage of lewd comments whenever they stream. It’s likely not a coincidence that only 29 percent of Periscope URLs are posted by women. To its credit, Twitter, which bought the company in March, has moved quickly to fix the issue by adding features that limit who can comment, but the problem persists. As an interaction designer, I was curious: how does Periscope’s layout and interface encourage or deter harassment?

Abuse has been a problem since Periscope launched

First of all, while Periscope has a great blocking feature — once a user has blocked someone, the blocked user can’t see or find who blocked them — the interface makes it difficult to actually use. Comments pop up and disappear too quickly for users to tap the harasser and click to block. You’d have to end the video, then scroll through users to select individuals to block. It’s a clunky interface, but the more I played with it, the more it became clear that mitigating drive-by harassment on a live-streaming app needs to start at a more basic level than blocking tools — after all, even if you could block everyone who left an abusive message, you’d still be playing an endless game of Whac-a-Mole. Instead, Periscope should redesign its interface so that it doesn’t encourage so much random interaction, which begets drive-by harassment. It should also slightly change its comment-disabling tool. The changes might seem small, but they could have a big effect on how users interact on the platform.

When harassment first started getting attention, Periscope added a feature for users to film "private" videos that only the people they tag can view, and it recently added the ability to disable the comments on individual videos. However, this isn’t a persistent feature, meaning it’s not a setting on a user’s profile that can be toggled on and set for all videos unless toggled off. Users have to tap on a menu on the filming start screen to disable comments every single time they live-stream. Periscope should make this a set, long-term feature. 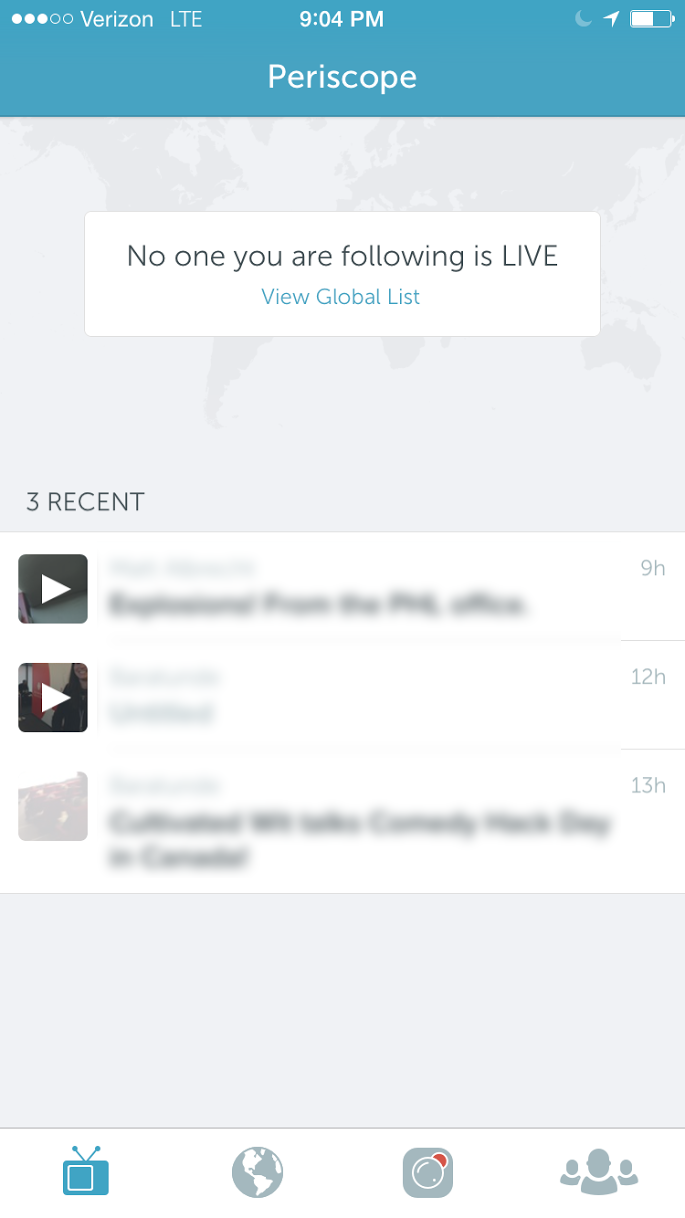 The larger change has to do with the way Periscope highlights users. Right now, Periscope’s design favors random interaction. If someone you follow isn’t streaming when you log on, the first thing you see is a button linking to the "Global" feed, a stream of strangers from around the world, above a few older streams from your friends.

There’s a second invitation to click on the global feed on the bottom menu, right next to the button for the main feed.

By having two calls to engage with the "Global" tab, it becomes the dominant feature, encouraging more random user interactions. Unlike Instagram, where the user’s feed is defaulted to friends only, the first thing a user sees when launching Periscope is an invitation to access the global feed, and then a few friends’ videos. Random interaction begets harassment for the same reasons people catcall, yell at people out of a car, or play ding dong ditch: when you’re interacting with strangers, you feel like you can get away with it. What’s the worst that will happen to you? You’ll get blocked? You’d probably never see your target again anyway, and there are plenty more people to harass. 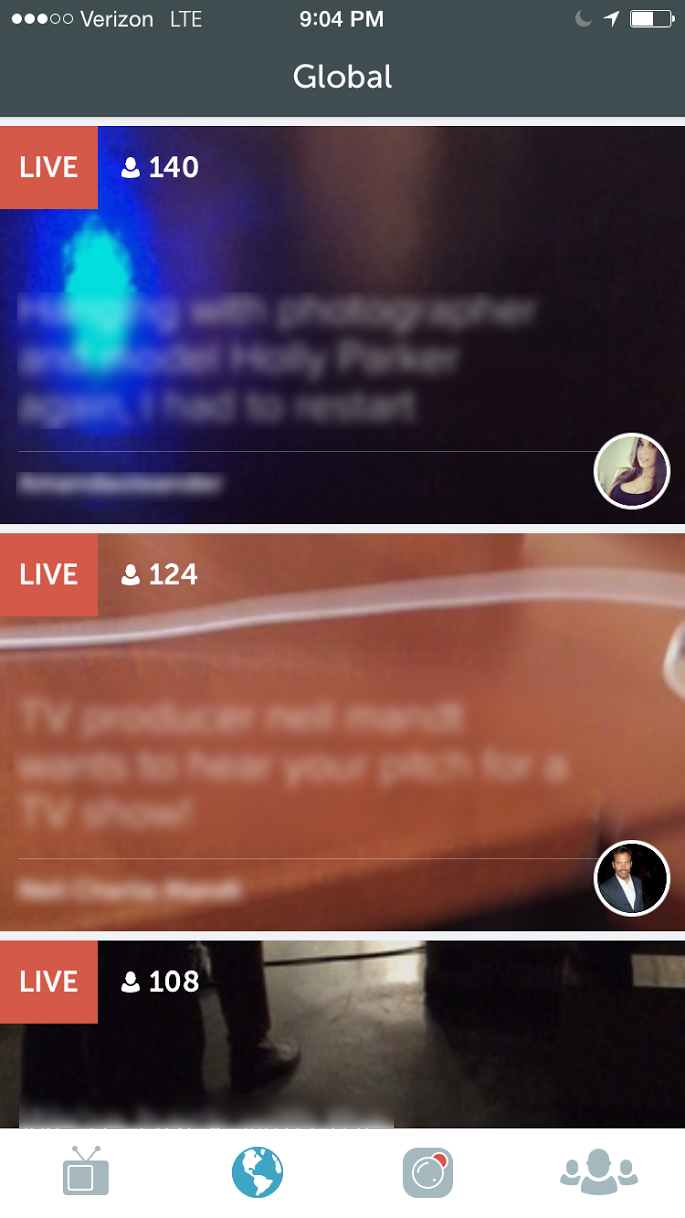 Periscope could mitigate this by curating more toward suggested users or friends of people the user is already following. If Periscope adjusts its inclination toward interactions with the "People" tab (where Twitter followers are and most popular users are), harassment could fall off. Minor changes in default settings can have large impacts. Riot Games' League of Legends saw a 17 percent decrease in harassment when they changed their in-game chat default feature to "off" instead of "on"; to activate, users had to select the game chat, and then turn it on.

The first step toward reducing harassment would be to default to a more tailored feed, something built on the current "People" tab. The "People" column is split between suggested users, taken from whom you follow on Twitter, and "Most loved," which lists popular Periscope users. Periscope could make a feed from "Most loved" and move it onto the "Global" tab so these two feeds live in one screen. It could then build out their suggested users to be not just Twitter followers on Periscope, but suggested, curated Periscope users, like the way Instagram recommends users based off other users you have followed. The home screen could feature a button to this Instagram-like stream instead of linking to the "Global" tab. These little changes may seem insignificant, but they could really change user behavior and stymie random, "drive by"-esque harassment by moving the default away from random interactions.

Not only would better curation and filtering cut down on harassment, it would make Periscope more interesting. Part of what makes Instagram so compelling is being able to search via hashtags, terms, and recommended users. I, as a user, want to be able to see things I’m interested in and search for them, rather than see whoever happens to be streaming at the time. Periscope is not Twitter, and it’s not Instagram, and it shouldn’t have to be, because it offers something different: real, live-streaming video. Having a more robust search feature, better recommendation features, and persistent filtering tools will improve the platform but not alter what gives Periscope its identity. Fortunately, Periscope is still small, so it can can play around with filtering and anti-harassment tools and interfaces. If it wants to become a bigger, safer, and more engaging platform, it’s going to have to.

Verge Video: A look at how Periscope works