What happens when you splice a smartphone with a Kindle?

What would it take to get you to put down the iPhone and switch to an Android alternative as your main smartphone? It's the question that every Android phone maker obsesses over, and the typical answer is a combination of higher specs, bigger screens, and even louder hyperbole. But the truth for most people is that they grow accustomed to whatever phone and software they are using and it takes a lot to get them to look elsewhere. It takes something unique.

The YotaPhone is most definitely unique. You might not be able to tell from the front, but flip this handset over and instead of a plastic flap or a stitched leather cover, you're faced with... another front, this time made up of an E Ink display much like the one in Amazon's Kindle e-reader. There have been numerous gimmicky attempts at making Android run on an electronic paper display, but what sets the YotaPhone apart from them is that it actually works. The second generation of this phone was introduced in December of last year and made massive strides forward in ergonomics and functionality. Now that it's received a hefty price cut, a new white version, a comprehensive Android Lollipop upgrade, and a tentative July release date for the United States, it's time for us to put the YotaPhone 2 to the test. 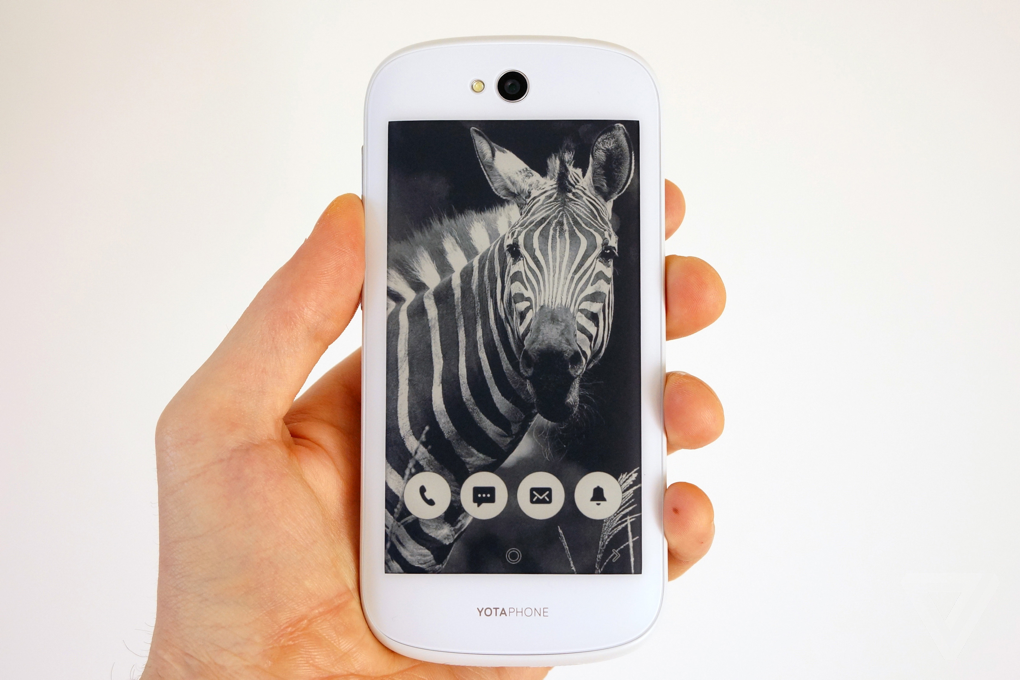 The essence of the YotaPhone's appeal lies in its combination of an extremely energy-efficient E Ink display with all the modern versatility of an Android smartphone. Think about how many commutes to and from work you can while away with the help of a Nook or a Kindle, and then imagine not needing a separate e-reading device at all. You have your smartphone with you all the time anyway, why not build the e-reader right into it, the same way that cameras, music players, and GPS units have already been integrated?

another step forward in the ceaseless march to smartphone convergence

That's what YotaPhone 2 gives you: another step forward in the ceaseless march to smartphone convergence. It's not the first Android device with an E Ink screen, but it is the first to make that duo work harmoniously. Instead of trying to jam the full-fat Android experience onto the slow e-paper display on the rear, Yota has wisely contented itself with adding useful widgets and interactive panels. There is a Yota Mirror mode that allows you to run Android entirely on the back, but this is strictly optional and mostly to be used when trying to extend battery life (such as by reading an article in the browser without deploying the full-power display). 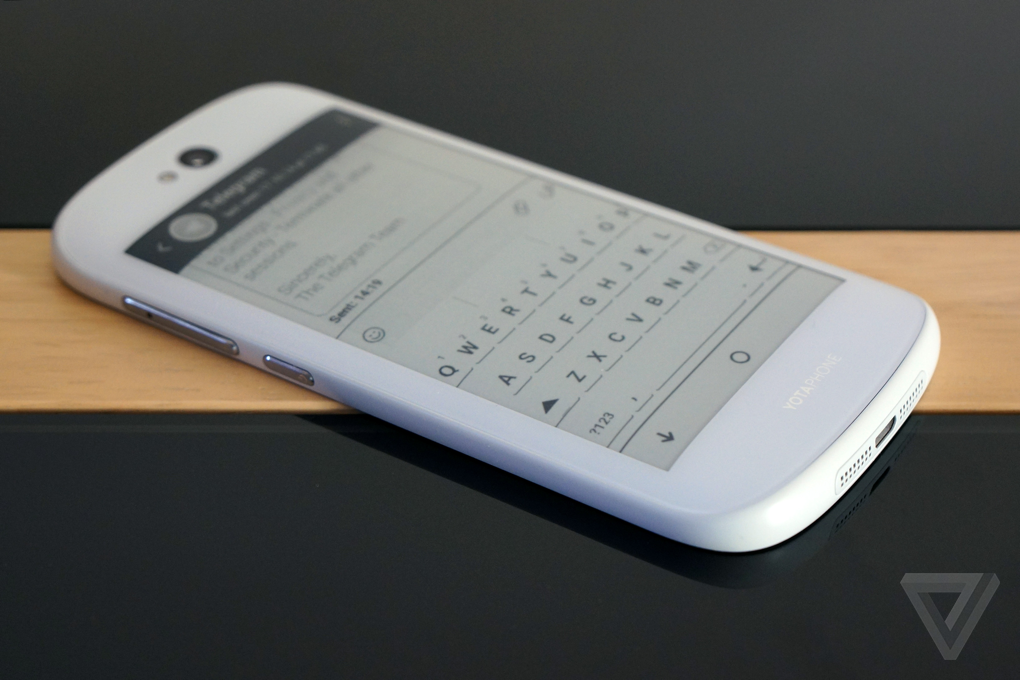 On the other side of the 4.7-inch E Ink screen is a 5-inch AMOLED display. The latter has a 1080p resolution, but suffers from poor color accuracy: it tends to oversaturate the picture and renders tomato reds in a carrot-like orange. These aren't new issues for OLED displays, and they're certainly tolerable in daily use, however the recent excellence of the Galaxy S6 has raised the bar of expectations and the YotaPhone 2 just can't compete. Yota clearly had to cut some corners in order to fit within budget, and it's elected to sacrifice some quality at the front for the greater versatility of having a display at the back.

The same is true of the YotaPhone 2's design. Much like its display, the phone's construction is just okay, nothing especially premium. It has a well rounded, uncomplicated shape that makes for comfortable ergonomics, but it also has a slight rattle in the volume rocker and a shallow power button that offers little tactile feedback. Competently made, though not something I'd ever fall in love with. But the YotaPhone 2's design story doesn't end when you buy the phone. The best part of it is only beginning. 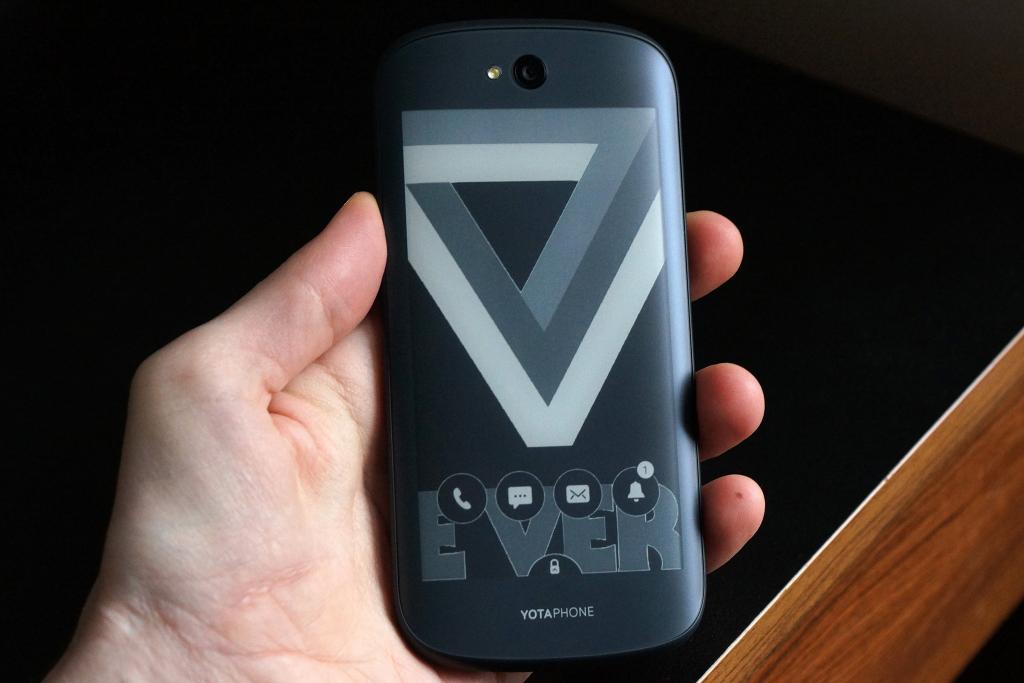 Motorola's Moto Maker will let you customize your smartphone only once, whether it be through the addition of pink accents or a wooden back or some classy leather, but the YotaPhone has no such limitations. Yota Covers convert the E Ink display into a canvas for expressing yourself. They can be cutesy, artistic, funny, or professional, it doesn't matter — when the screen isn't being used for information, it serves as an instant outlet for personalization and creativity. This is what makes this otherwise unremarkable phone so appealing to me: it's ridiculously easy to make it feel like it's my own, special device.

It's ridiculously easy to make it feel like it's my own, special device

Back in December, the original YotaPhone 2 software had a confusing nomenclature for its E Ink elements, distinguishing between images that served as Covers and widget-laden Panels that did something more than just look good. Transitioning between the two was awkward and unintuitive, however the new YETI (Yota E Ink Technology Integration) 2.0 update rectifies that by treating both categories pretty much like an Android home screen. There's a nice customization app, accessed via the regular OLED display, where I was able to quickly set up a couple of utility Panels and one image-cycling Cover. Switching between them is done via lateral swipes, and there's now a familiar Home button at the bottom of the E Ink display that always brings me back to my starting screen. With the new software, I can also access and manage my Android notifications directly on the back of the phone. 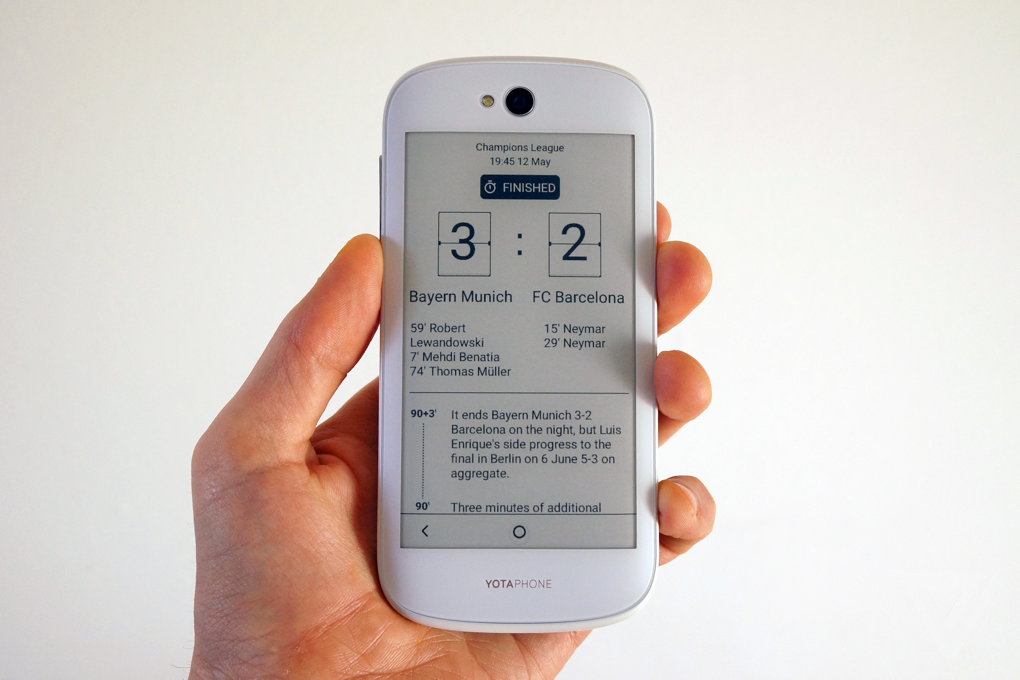 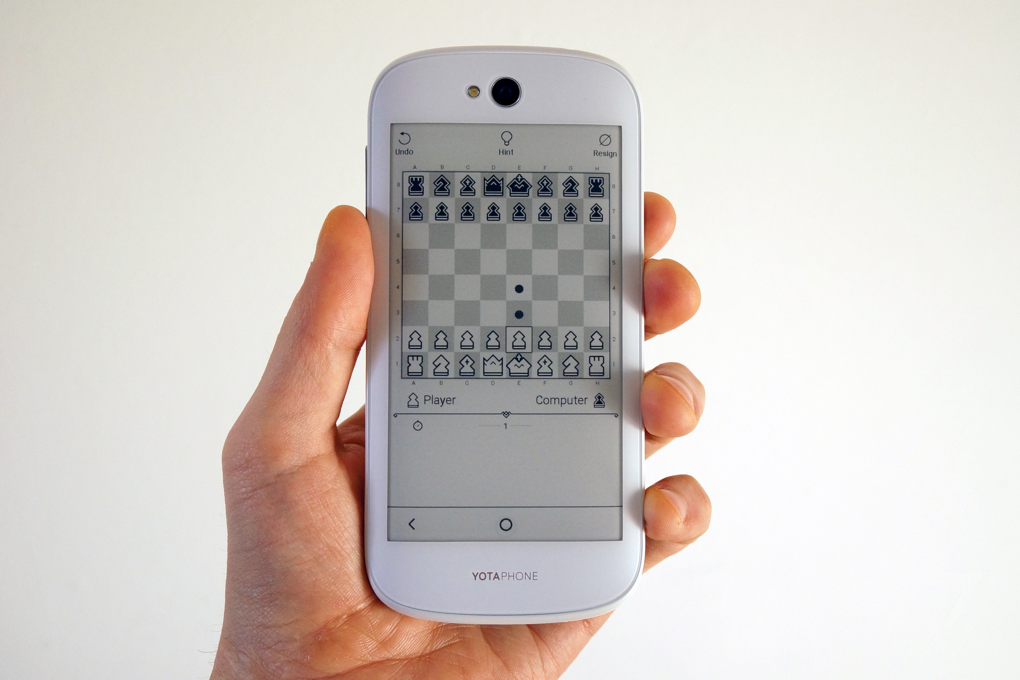 One of my big frustrations with smartwatches is how often they instruct me to open something on my phone instead of taking care of the task directly. It rather defeats the purpose of transposing the interaction away from the phone. I've found a few instances of that same issue with the YotaPhone 2, but they're the exception rather than the rule. For such a small company, Yota has done a remarkable job of quickly creating widgets for some of the most popular social clients like Twitter, Facebook, and Instagram, and also building up its own app portfolio with things like YotaFit, YotaRSS, YotaSports, and even Yotagram. The latter is a customized version of Telegram — which happens to be my favorite messaging app — that allows me to carry on a conversation entirely on the E Ink screen. And it's not just limited to typing out missives: there's a one-tap voice response option, which I found useful when conducting casual chats while doing something else.

Most of the attention has been lavished on the back, leaving stock Android on the front

The YotaPhone 2 successfully offloads a number of the most common smartphone interactions from the main, power-hungry display to one that barely uses any energy at all. It tells me the time, lets me know about upcoming calendar events, and keeps me socially connected, all without necessitating that I flip the phone around and get back into the conventional smartphone experience. In fact, the issue I have more often is about sending stuff from the front of the phone to the back — such as a particular map area or an article I want to read — which is still not as easy and straightforward as it could be.

The YETI 2.0 software adds a dedicated Gmail widget for the E Ink screen, however the one piece of Google software that seems tailor-made for a device like the YotaPhone — Google Now cards — isn't coming anytime soon. Yota CEO Vlad Martynov tells me that the company would love to implement Now cards, but it's up to Google to make them compatible with always-on displays of this kind. 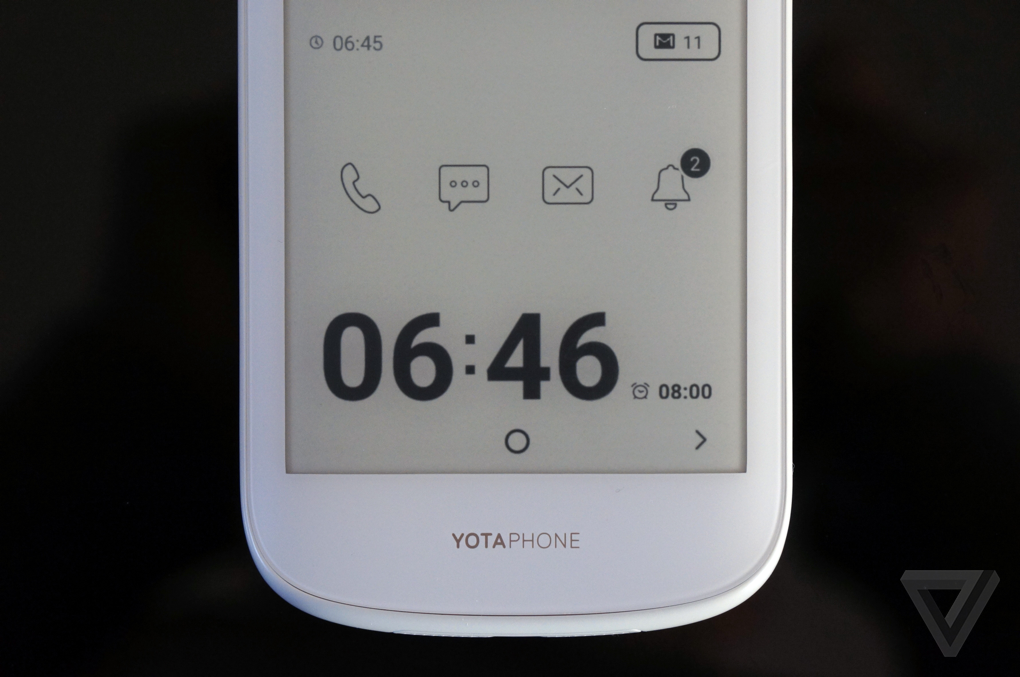 With so much time and attention committed to making the E Ink display useful, Yota's customizations to the regular Android experience are pretty much nonexistent. Android Lollipop on this device is scarcely distinguishable from Lollipop on the Nexus 6 or Moto X. The visual similarities don't extend to performance, however, as the YotaPhone is noticeably slower and nowhere near as smooth as other devices running Android's latest. Animations often stutter, and while responsiveness is decent, it leaves me wishing for an escape to something more rapid and satisfying like LG's G4 or Samsung's Galaxy S6. This is the one thing that Yota really needs to upgrade going forward: ensuring that its "regular" Android experience doesn't fall behind users' expectations while still building out the unique advantages that the E Ink screen provides.

Getting the most out of the YotaPhone 2 will depend on your circumstances. I often find I require the backlight of the front screen when checking notifications in my poorly lit office, but outdoorsy types will find it a boon out in the sunlight where OLED displays struggle. After two weeks with the YotaPhone, I was still stuck in the old habit of turning on the phone to handle notifications quickly, which suggests the E Ink software isn't really immediate enough to suit my needs. Not surprising, but something to bear in mind.

The YotaPhone is also not the phone for anyone looking for outstanding camera performance. It has an 8-megapixel camera, which has gotten better with the new software update (Yota credits Google's improved Android Lollipop camera software for much of this), but it's still decidedly average. Yes, very much like the build quality, display, and basic specs of this device, the camera does just enough to check the box — it's there and it works. 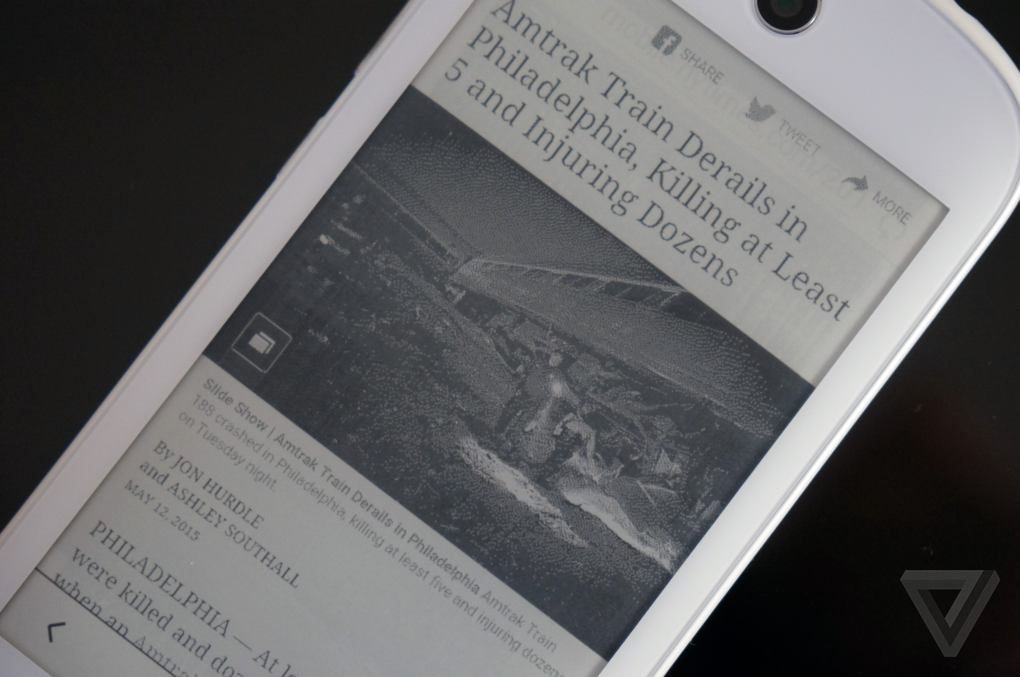 Battery life, on the other hand, is an area where the YotaPhone 2 has an obvious advantage over its competition, but you'll have to use it the way it is intended to be used. Running it as a regular Android smartphone, I found it to be, once again, mediocre. It's when you start trusting the E Ink display to be a useful alternative to the OLED one that you will truly notice a difference. I was able to extend the typical one-day battery life to more than two after I committed to checking things on the e-paper display. An added bonus that Yota didn't announce when it first launched the phone is that it supports Qi wireless charging. The company is now selling a neat wireless charging accessory that doubles as a portable battery, meaning it will let you charge wirelessly even without being connected to a power outlet.

If your top priorities when seeking out a new smartphone are camera performance, fast responsiveness, and an amazing display, you should look elsewhere. By the usual, extraordinarily high standards for smartphone quality, the YotaPhone 2 is underwhelming and unimpressive. But that's just the sacrifice you have to make to get the benefit of the E Ink display. Unlike many others, this device feels like it has a clear purpose and reason for being. And that reason is a joyous one: it almost feels like cheating to be able to enjoy an ebook on an e-reader and then just flip it around and find yourself inside the familiar confines of an Android smartphone.

It's not enough to convince me to step away from the iPhone (or the Galaxy S6, for that matter), but it's certainly a unique phone that offers real diversity in a saturated market.