Puzzles & Dragons on 3DS could hint at Nintendo's mobile future

Puzzles & Dragons on 3DS could hint at Nintendo's mobile future

By the end of this year Nintendo will release its first game for smartphones. The developer announced a partnership with mobile company DeNA back in March, and more recently said that we'd see five games released by the end of 2017 as part of the deal, including one in 2015. "We aim to make each title a hit," Nintendo president Satoru Iwata said. The thing is, we have no idea what those games might look like. Nintendo still makes some amazing experiences, but some of its early forays into free-to-play, mobile-style games haven't been so great. DeNA, meanwhile, is best known for the terrible digital card game Rage of Bahamut. So what will happen when these two companies collide?

The answer might look something like Puzzles & Dragons: Super Mario Bros. Edition, which launches on the Nintendo 3DS next week.

"We aim to make each title a hit."

Puzzles & Dragons has been a huge hit on mobile. As of January the game had been downloaded more than 40 million times across iOS and Android, with 6 million of those coming from players in North America. It's sort of like Candy Crush mashed up with Pokemon: you match like-colored gems in groups of three or more, and doing so will cast spells on monsters you're fighting. You can collect monsters, fuse them together, and evolve them into even more powerful creatures. It has that addictive gotta catch 'em all mentality that has made Pokemon such an enduring hit, and it's a perfect game to pick up and play for a few minutes at a time.

The new Super Mario-themed version does away with the monsters and replaces them with characters from the Mushroom Kingdom. You can build a team of Marios and Luigis, and fight against goombas, blooper squids, and the koopa kids. You can still evolve characters; give a goomba the right power-up, and it'll sprout wings. Aside from a few gameplay tweaks, it's the same game as on mobile, just with a new coat of paint. For Mario fans, there's the familiar characters, music, and power-ups, and you even move around a board that looks ripped right out of Super Mario 3D Land. (The other difference, of course, is that this is a game that you buy for $30 bundled with Puzzles & Dragons Z, so it doesn't have all of the free-to-play trappings of the mobile version.) 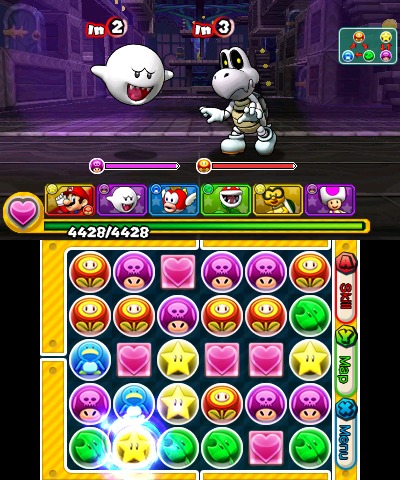 It actually works quite well, and the developers have done a good job of cleverly integrating Mario elements into the experience. When you battle a squid, it'll shoot ink that blacks out some of your screen, and you can collect a number of variations of Mario and other characters. No collection is complete without raccoon Mario. These features don't fundamentally change the game, but they'll likely make it appealing to an audience who doesn't care about collecting and evolving dragons and trolls.

And that's exactly the point: Nintendo's new mobile initiative is designed to introduce new players to the company's characters and games, and then hopefully lure them to console and handheld experiences. "We will deploy our game business on smart devices not because we think that the dedicated game system business will wane, but because doing so will encourage a greater number of people to associate with Nintendo IP, to become familiar with the charms of video games, and, eventually, to explore more premium experiences on our dedicated game systems," Iwata explained during a recent financial results briefing.

The new Puzzles & Dragons for 3DS is just one potential way the company could do that; take an existing, popular mobile-style game and give it a Nintendo twist. I, for one, would definitely play a mash-up of Clash of Clans and Fire Emblem.