Share All sharing options for: Google redesigns Play Music on the web with a bigger focus on artwork

A few months ago, Google's Play Music smartphone apps were updated to showcase the company's colorful material design interface. And today, Google is giving a similar fresh coat of paint to Play Music on the web. Load the company's music portal and you won't notice any drastic differences from what was there yesterday, but a slew of design tweaks have brought Play Music into a more cohesive experience that feels more app than website — and that's the whole point.

"We're moving towards making the web feel more like an app and less like a series of web pages strung together by links," said Google UX designer Bryan Rea by email. "The new header, the slick transition as you scroll, the collapsible nav, new animations, these all feel like things you expect in an app not on the web." Aside from some updates to fonts and transitions, you'll also notice a much greater emphasis on artwork. High-resolution photos fill the screen behind every playlist, album, and artist bio page. "For the increased focus on big, immersive artwork, when you're listening to music, you can get lost in it (in a good way)," wrote Rea. "With the new album and playlist pages, you enter an immersive world focused on the music you're enjoying." 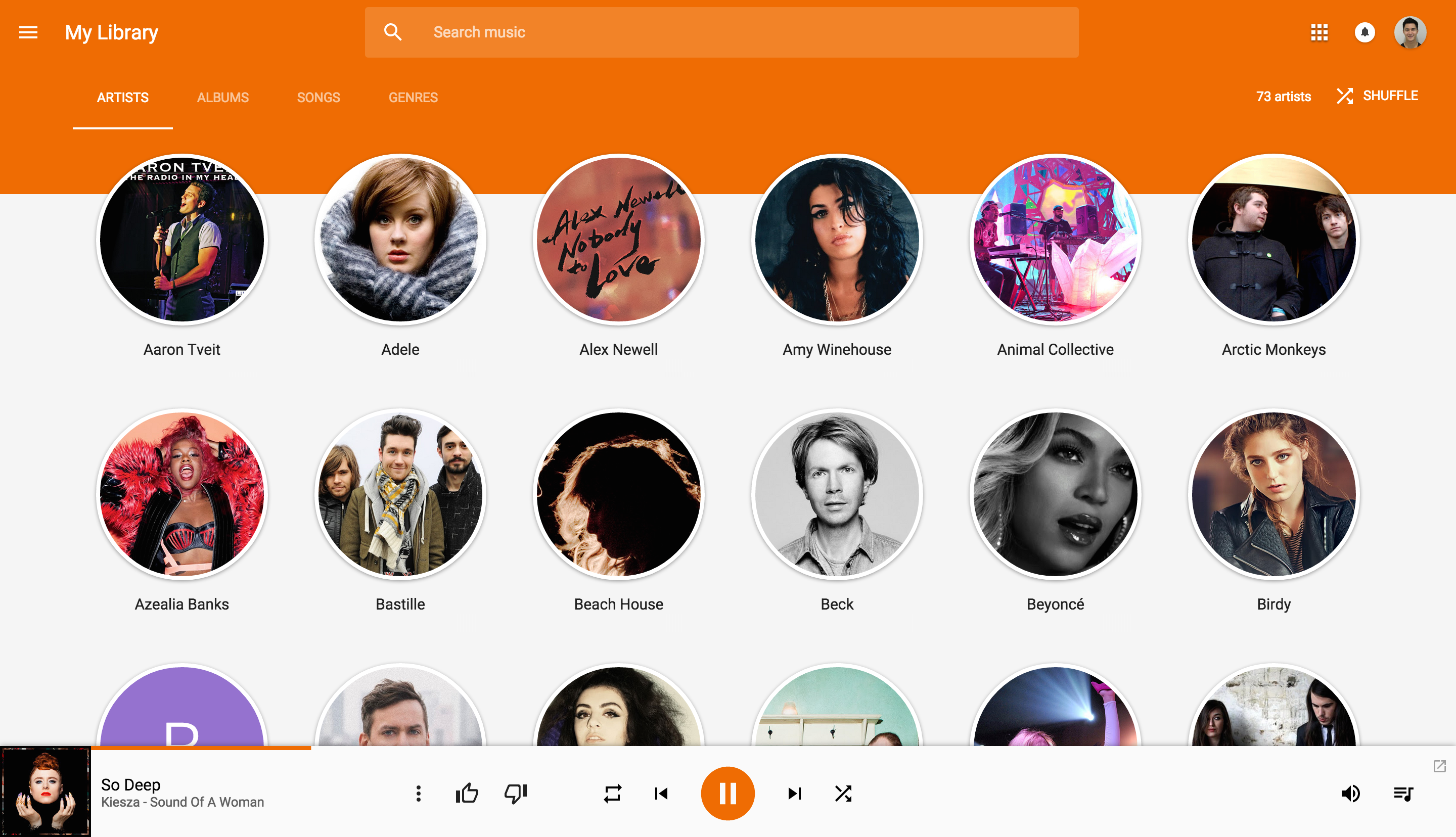 Another small change: the artist page has moved away from square photos in favor of circle crops — the same switch Android, iOS, and third-party apps have made when it comes to displaying your contacts. "We're trying to differentiate people from other content, making artists and bands first class citizens in the experience and not just another card," said Rea. "Circles feel more organic than sharp edged squares and rectangles which makes them a perfect fit for people's faces." Design talk aside, the most useful addition to this update is a new queue pop-over that you can toggle on by hitting an icon at the bottom right. Previously, this disrupted your music browsing and took you back to a dedicated queue page. Now, you can continue looking around for new music and quickly see which songs are coming up in your playlist. Google has also made some accessibility improvements, introducing "lots" of new keyboard shortcuts and Screenreader compatibility.

Google is making these changes as it continues to compete against Spotify, Tidal, and soon Apple in the paid music subscription business. Play Music's two-pronged approach of combining generous free cloud storage with a paid, on-demand subscription service helps it stand out against those rivals. And unlike Tidal, which has somewhat shamelessly cloned Spotify's look and feel, Google's Play Music maintains a look all its own. As Spotify and Apple prepare to make news, this is Google's answer in the streaming music wars. It's not a bad choice. Below you'll find some more images of Play Music's refresh on the web. If you're not seeing the changes just yet, don't fret; they're gradually rolling out over the course of the day.

DeviantArt is expanding its system for flagging stolen NFT art