This is the first fully warm-blooded fish

This is the first fully warm-blooded fish

At first glance, the opah looks like a giant, bloated disc armed with oh-so-puny fins. The two-meter-long creature is fun to look at, and maybe laugh at, but it's got a lot more to share with you than its looks. As it turns out, it's the only "truly warm-blooded fish," according to National Geographic — and it's pretty fast, to boot.

Usually, a fish's overall temperature matches the water it's in

Usually, a fish's overall temperature matches the water it's in. There are some exceptions — some fish can heat parts of their bodies — but the rule holds true if you're looking at a fish's entire body. Fish generally don't have the ability to warm their hearts, or their brains. But the thing is, the opah does. Its whole body is usually about five degrees Celsius warmer than the water it's swimming in. 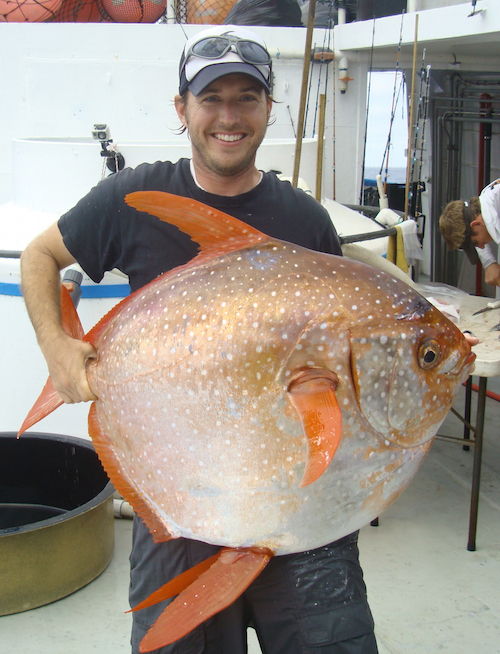 The discovery, published today in Science, was an accident. Nicholas Wegner, a biologist at the National Oceanic and Atmospheric Administration, told National Geographic that his team caught some opah during a research trip, and subsequently decided to find out more about the species. During a dissection, Wegner noticed that the gills were sporting the same kind of blue and red blood vessels, called retia mirabilia, that tuna and sharks use to heat parts of their bodies. Except that unlike sharks and tuna, the opah's red and blue blood vessels were located inside the gills, rather than in the fish's swimming muscles.

The cold blood stays mainly in the gills

The finding means that when the opah flaps its pectoral fins to generate heat, warm blood gets to travel through the entire body before being cooled by water in the gills. When that happens, the cold blood in the gills — blood that's now also oxygen-rich because of the exchange with water — gets heated by oxygen-depleted, warm blood coming from the body. Thus, cold blood never gets to exit the gills. As Ed Yong puts it, the opah seems to have flipped the conventional arrangement by isolating the cold part of its body, its gills, from the warmer regions — regions like its brain, its muscles, and its heart.

No other fish warms its own heart.

This is a pretty big deal, but the opah had more surprises in store for Wegner and his team. Because of its size and shape, they assumed that the disc-like creature was a slow swimmer. They were wrong. By tagging some of these fish, the researchers learned that they migrate thousands of kilometers. "All indications are that this is a very fast fish and an active predator," Wegner said.