It's one of LG's most impressive displays of screen technology yet: a 55-inch OLED panel that's just 0.97mm thick and weighs just 1.9kg (4.1 pounds). The panel is so thin that it can be stuck to the wall using a magnetic mat before being peeled off like wallpaper, reports Korean news agency Yonhap. But while the new display is much thinner than LG's flagship OLED TVs, this is most likely because it doesn't incorporate the circuitry that would actually make it function as a TV, with most of the electronics hidden somewhere off-screen.

OLED displays might be the future — but they're tricky to make and expensive, too

But while this "wallpaper" display might not be a commercial product, it does signal the continuing ambition of LG Display — the LG subsidiary that manufactures screens for the company — to push forward with its OLED (organic light-emitting diode) technology. Because OLED TVs don't need backlights, they can be much thinner than rival types of technology. However, OLED displays are tricky to manufacture, and poor yields have led to exorbitant prices for consumers. Rivals like Samsung and Sony have even chosen to move away from the technology. LG, however, seems dedicated to it — with the company announcing seven new OLED TVs at CES earlier this year. With prototypes like this, it's easy to see why they remain hopeful about the technology. 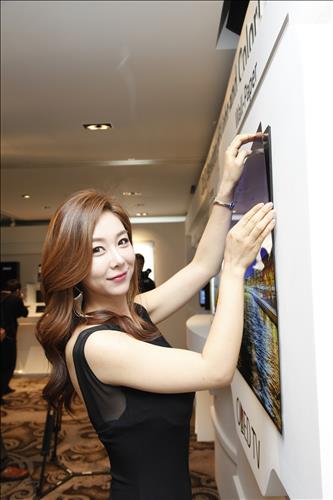 A model pulls back the top corner of the prototype display at an LG event. (LG/Yonhap)
Most Popular
From our sponsor
Advertiser Content From