The best keyboard for the iPad Air 2

A little help for when you need to Get Stuff Done

Share All sharing options for: The best keyboard for the iPad Air 2

The iPad Air 2 is great, and by now the myth that you can't get "real" work done on it has been thoroughly debunked. You can use office apps from Apple, Microsoft, and any number of elegant text editors to Get Stuff Done. For most people, work means typing, and it usually means typing a lot. Doing that on the iPad’s touchscreen is a hassle, so you're going to want a keyboard — a real one.

If you're going to pick out a keyboard for the iPad Air 2, you're in for a rude awakening: there are literally dozens of them, and they're all a little different. But you can assume a few things at the outset about all of them. They all use Bluetooth to connect to the iPad and most of them have battery life that's rated in terms of weeks, not hours. They all mostly offer a near-full-sized deck of keys about the same width as the iPad itself, and you should never have to hassle with custom software on the iPad to use them.

But then you get to the differences: some turn your iPad into a laptop, some have weird origami cases, some fold up into tiny packages. Those differences may not seem like a big deal when you're looking at photos on Amazon or checking them out at Best Buy, but they add up. Problems like an awkward case, mushy keyboard, or iffy wireless connection won't take long to frustrate you enough to just put the damn thing in a drawer.

So what should you expect in a keyboard for your iPad Air 2? First and foremost: it should feel great to type on and not drop keystrokes. You'll also want it to hold your iPad up at the right angle (or angles). You really want something that will work on your lap. Most importantly: it really shouldn't cost too much, certainly not more than $150.

Believe it or not, hitting even those basic requirements turns out to be too much for the vast majority of keyboard cases we tested for the iPad Air 2. But there's one keyboard that managed to do it all. It might surprise you who makes it; it surprised me. 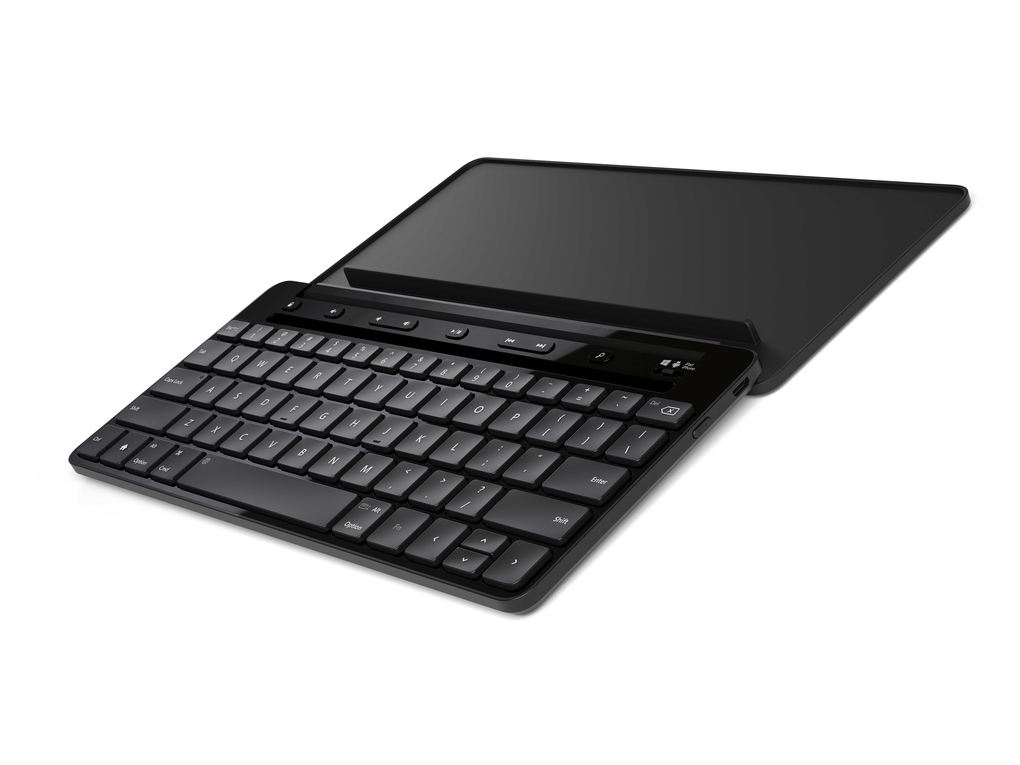 Microsoft, yes Microsoft, makes the best Bluetooth keyboard for the iPad Air 2. Unlike most of the other keyboards we tested, this isn’t a case. Instead, it’s a slim, well-built keyboard that sits underneath a hinged plastic cover. Open it up, and it turns on, and you can fit the iPad into a slot in the keyboard’s cover at one of two angles in either portrait or landscape. It works well on your lap or on a table, and you can even remove the cover and set it back a distance from the keyboard.

Obviously, the most important thing is that it’s a good keyboard to type on — and it is. The keys have enough travel to feel satisfying when you hit them and are spaced widely enough to be comfortable. None of the keyboards we tested were full-sized, but it was pretty easy to get comfortable with this one. I also liked the layout of the special keys for controlling music because they are separated out and didn’t make you learn to use some Fn-based key combo.

Going with a separate keyboard does have one disadvantage: you’ll have to remember to lug it around. But that’s about the only downside. One of the main reasons I like this keyboard is that it will work with any iPad case so long as it’s not too thick — 10mm is the max, 4mm thicker than the iPad Air 2. So if you already have a case, you can keep using it. If you don’t, you can just go get the one you *actually* want instead of using whatever comes with your keyboard. Other keyboards we tested were great to type on, but weren’t compatible with iPad cases at all.

One other reason to like this keyboard: it works with your phone too, whether it’s Android or an iPhone, a Windows computer, or any future tablets you might buy.

But the best part is the price: it retails for well under a hundred bucks.

Our review of Belkin QODE Ultimate Pro for iPad Air 2 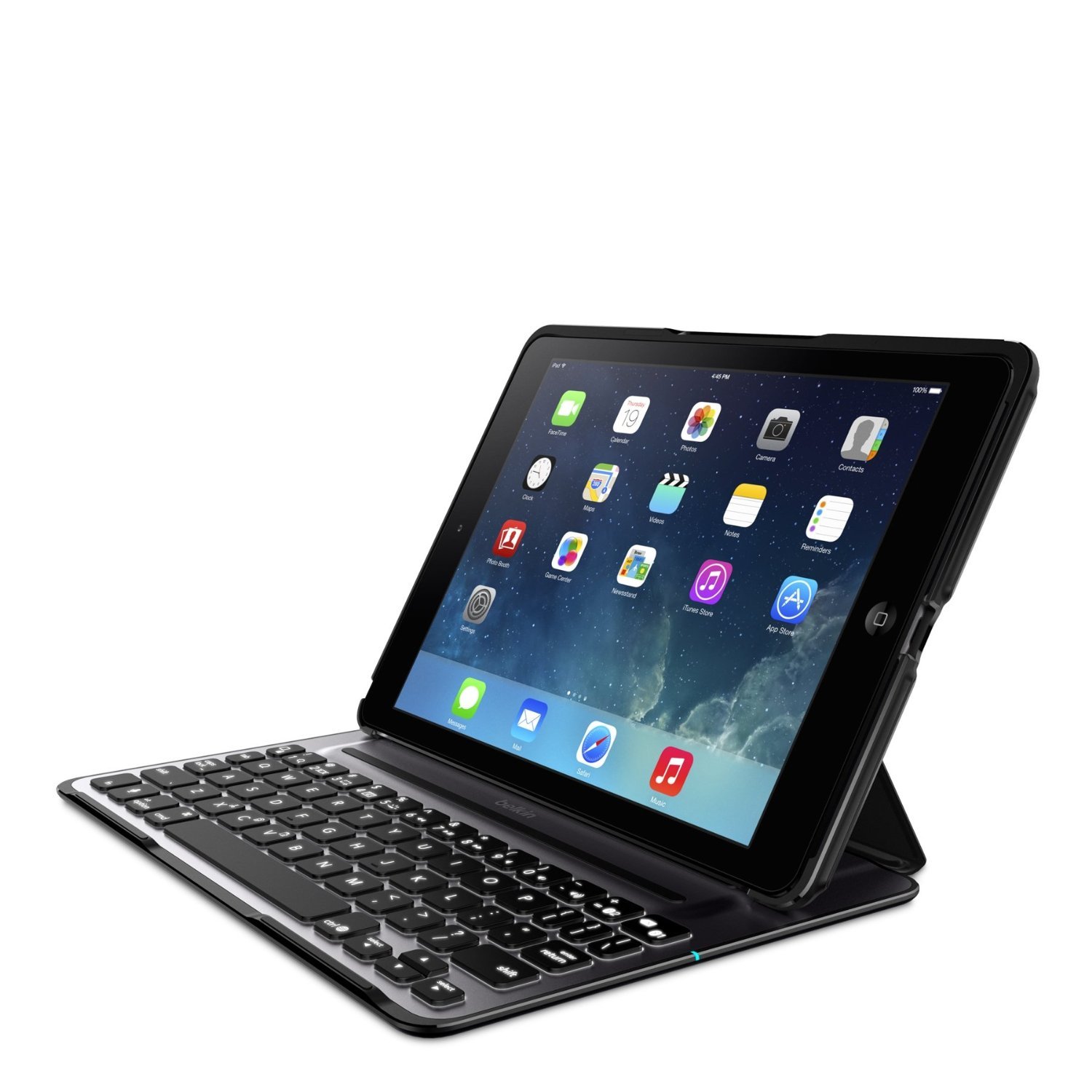 If price is no object and you don’t already have a case you like for your iPad Air 2, the best of the rest is Belkin’s QODE Ultimate Pro. (Beware, there are a few different models of QODE Ultimate keyboards, the one you want is the Pro.) It really offers everything. It starts with a really nice, backlit keyboard that you can detach and is great to type on.

It’s also a nice-feeling protective case that can even work with Apple’s own Smart Covers. It attaches to the keyboard with magnets and uses the magnets to turn the keyboard on. You can position the iPad at two different angles in both portrait and landscape, too.

The only problem with the QODE Ultimate Pro is that it costs basically twice as much as Microsoft’s keyboard. That’s a pretty big investment — especially since it won’t really work with any other device.

Our review of Logitech Ultrathin (for iPad Air 2) 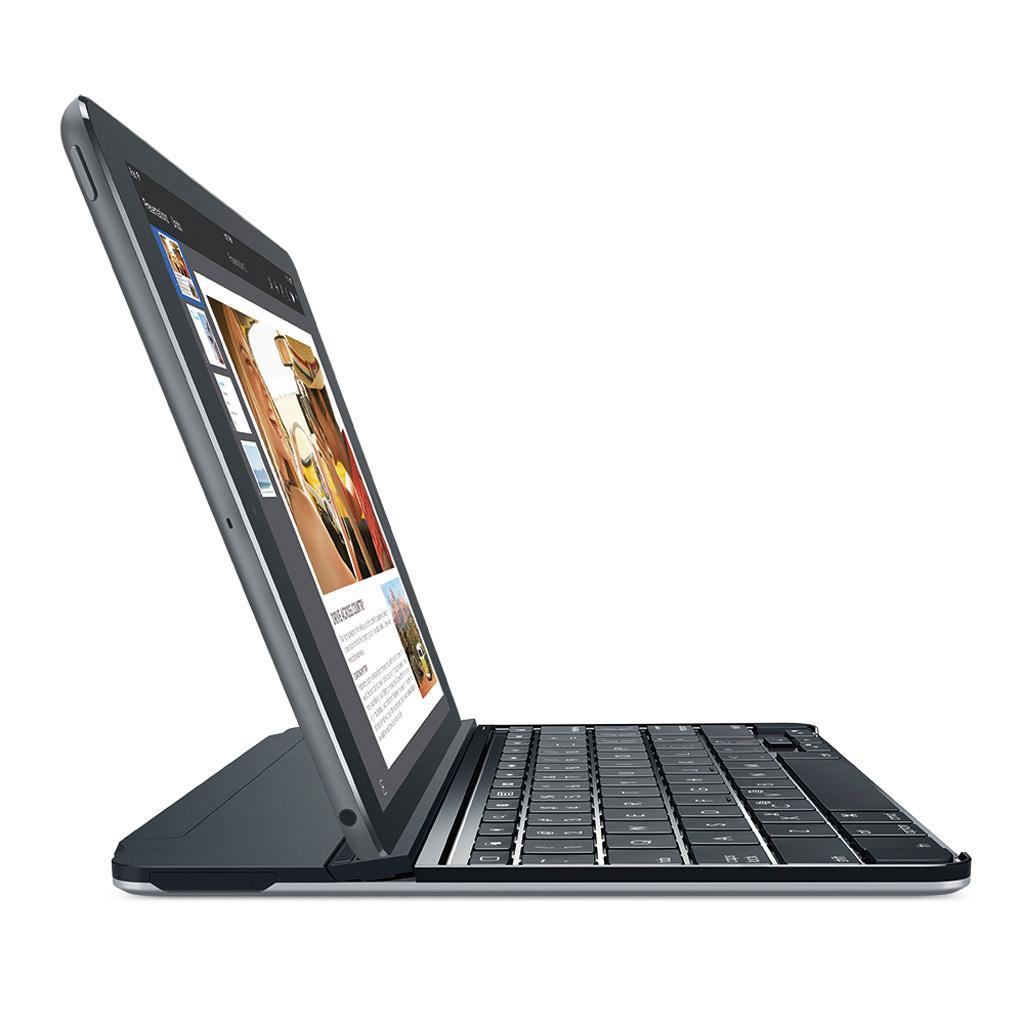 This is a very popular, stand-alone keyboard case, and it's received numerous rave reviews. It acts as a cover and lets you slot in the iPad and then adjust it to multiple angles. The iPad Air 2 model has replaceable, rechargeable batteries, and typing on it is pretty good, too. But you can't use it with any case except Apple's smart cover.

Our review of Kensington KeyFolio Thin X3 for iPad Air 2 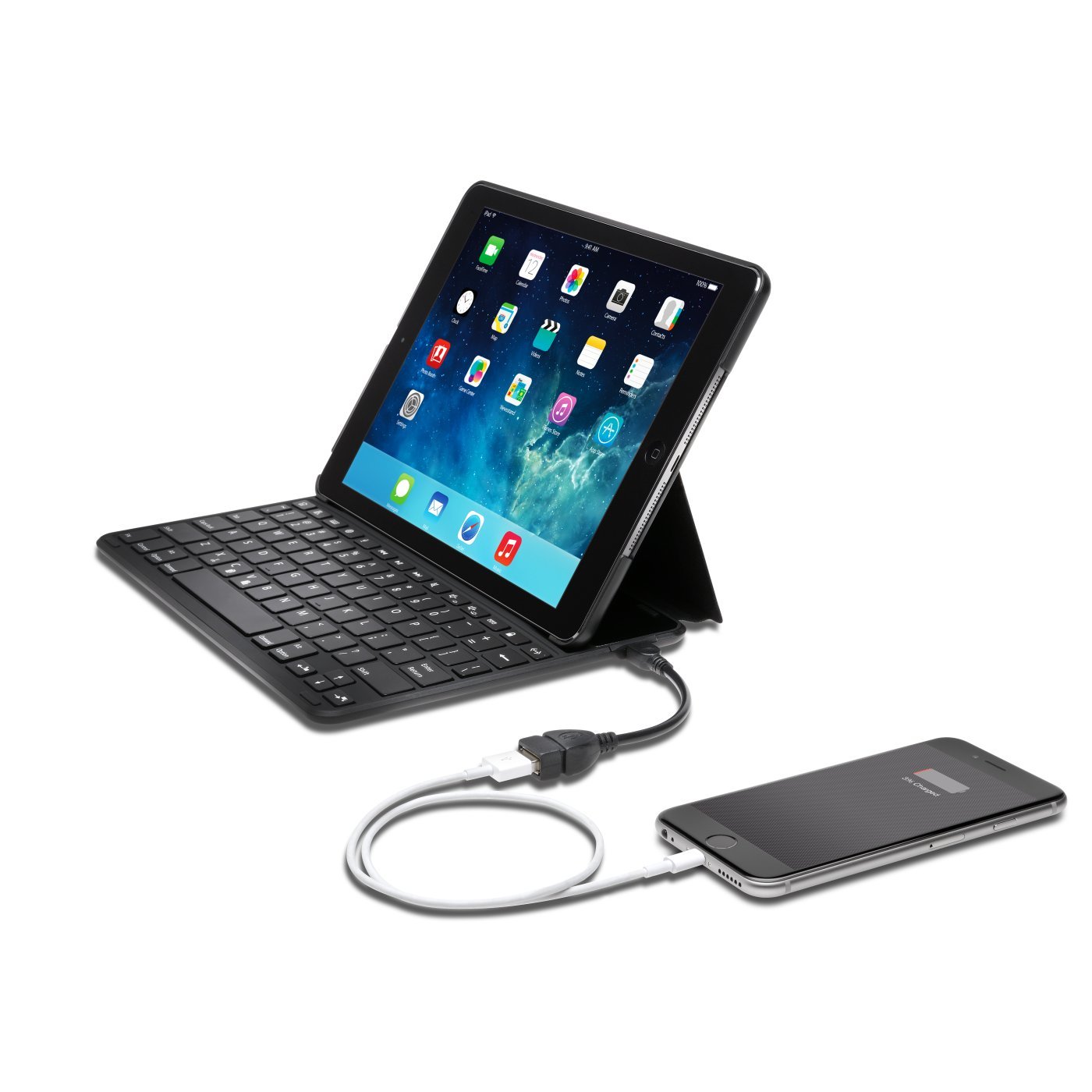 Kensington makes a bunch of vaguely differentiated keyboard cases for the iPad Air 2. The Folio Thin X3's gimmick is that it can serve as a backup battery for an iPhone in a pinch. That's neat, and the whole package feels well made, tight, and compact. Like most folio cases, it only lets you type at one at one angle. 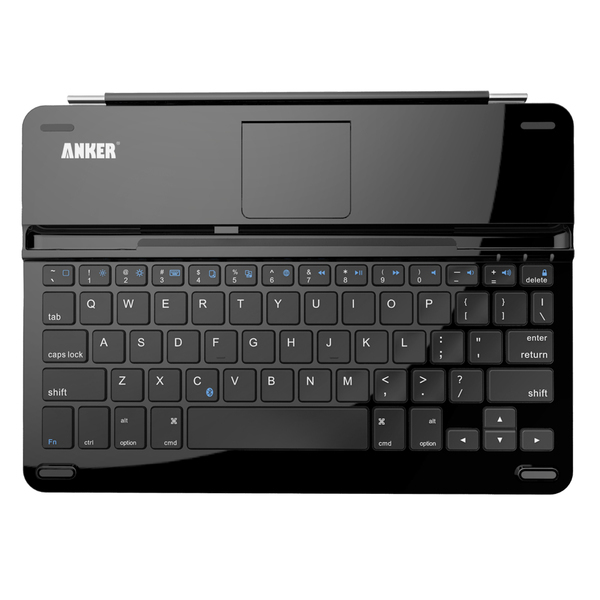 The Anker Bluetooth Ultra-Slim Keyboard Cover is a stand-alone keyboard with a slot for your iPad. You can attach it via magnets to use it as a cover, and when you slot in the iPad, a clever little stand pops up to prop up your tablet. That's all nice, but it won't work with a case.

Our review of Logitech Type+ (for iPad Air 2) 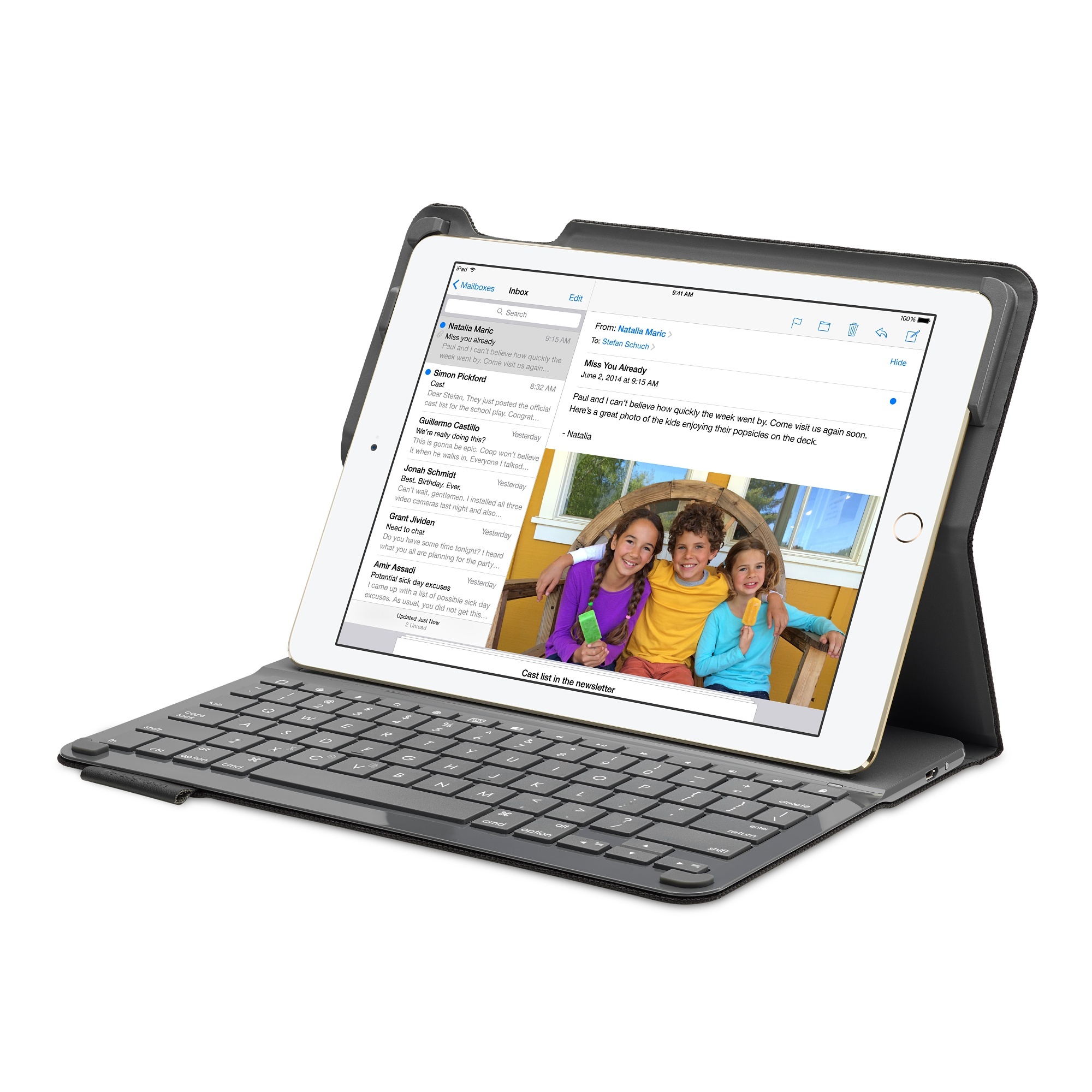 This is a really handsome, folio-style keyboard case for the iPad Air 2. It has an almost canvas-like finish that's really easy to grip and protects against the usual wear and tear. Unfortunately, it can only work at one typing angle. 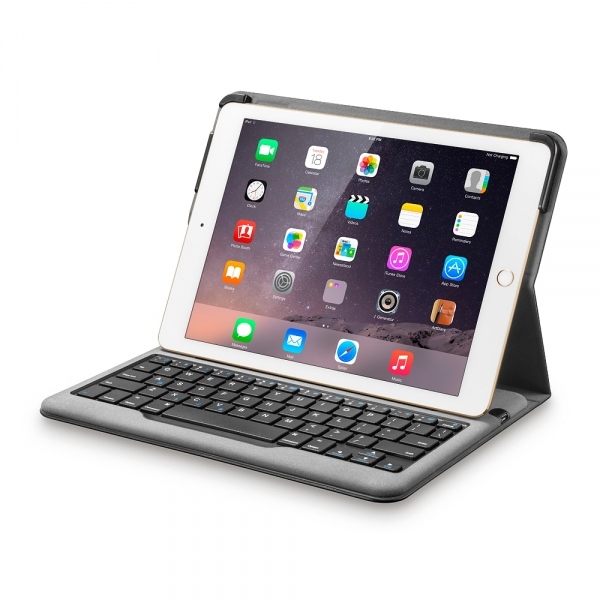 This keyboard case has felt on the inside to protect the iPad and a leather-like finish on the outside for added grip. Like other folio keyboards, though, you can only use it at one angle in landscape mode. Anker makes great batteries and chargers, but this keyboard case doesn't really stand out. 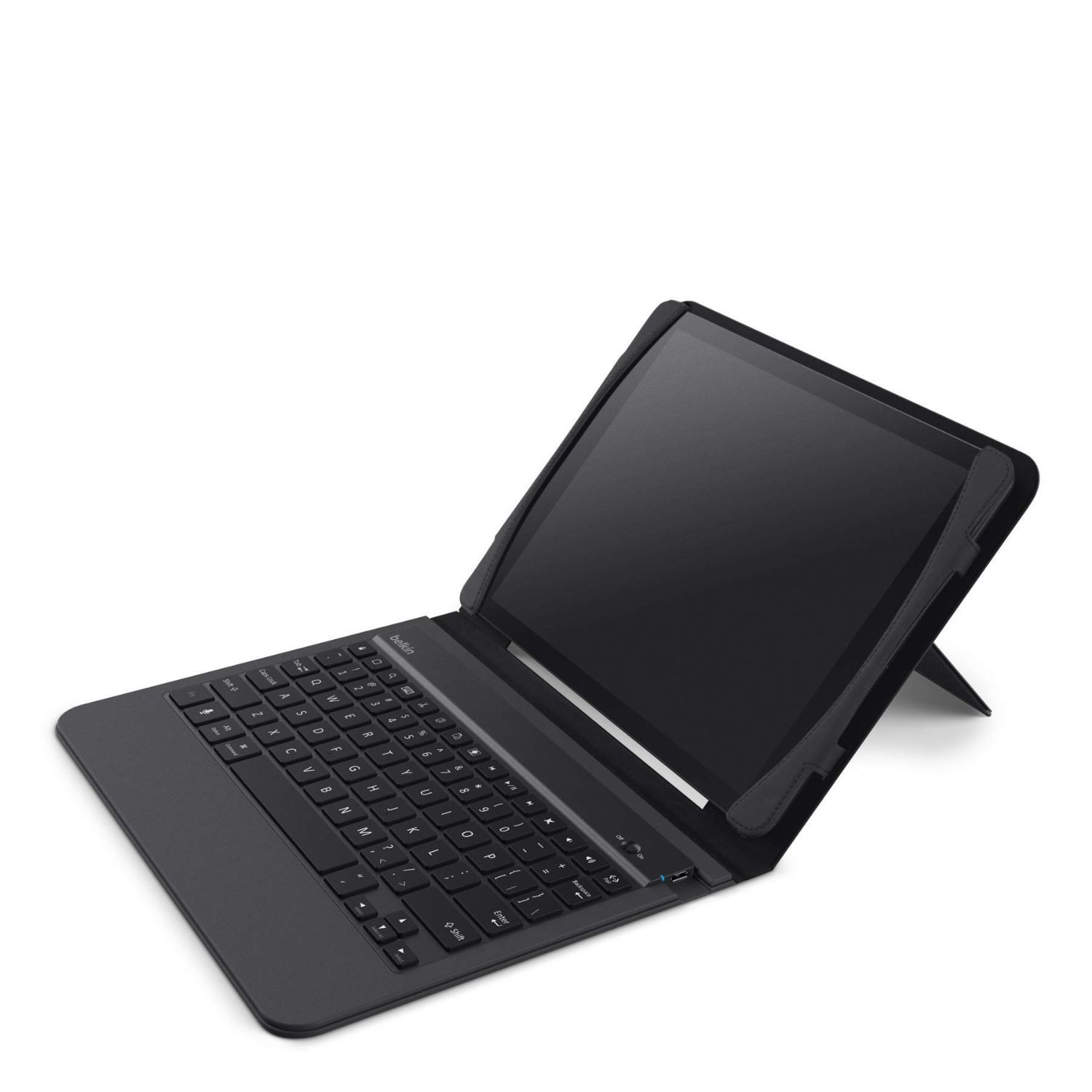 This folio-style case does the job, but it can leave you fumbling a bit when you just want to use the tablet without the keyboard. We found that it's actually really hard to get the iPad in and out of the plastic corners that hold it in place. On top of that, the build quality really felt sub-par.

Our review of Moshi VersaKeyboard for iPad Air 2 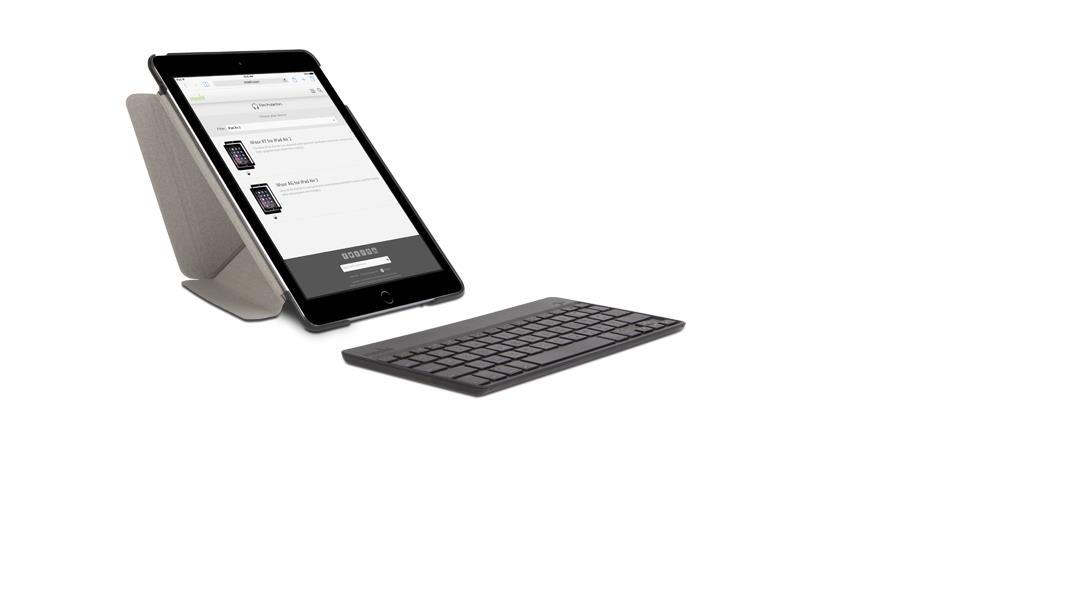 The Moshi VersaKeyboard has bad ideas of what you want in a keyboard for your iPad. The keyboard sits in a slot on the back of the case, and you have to remove it and use it separately, using the case to prop up the iPad. That makes it pretty much impossible to use on your lap unless you really enjoy balancing two things there. 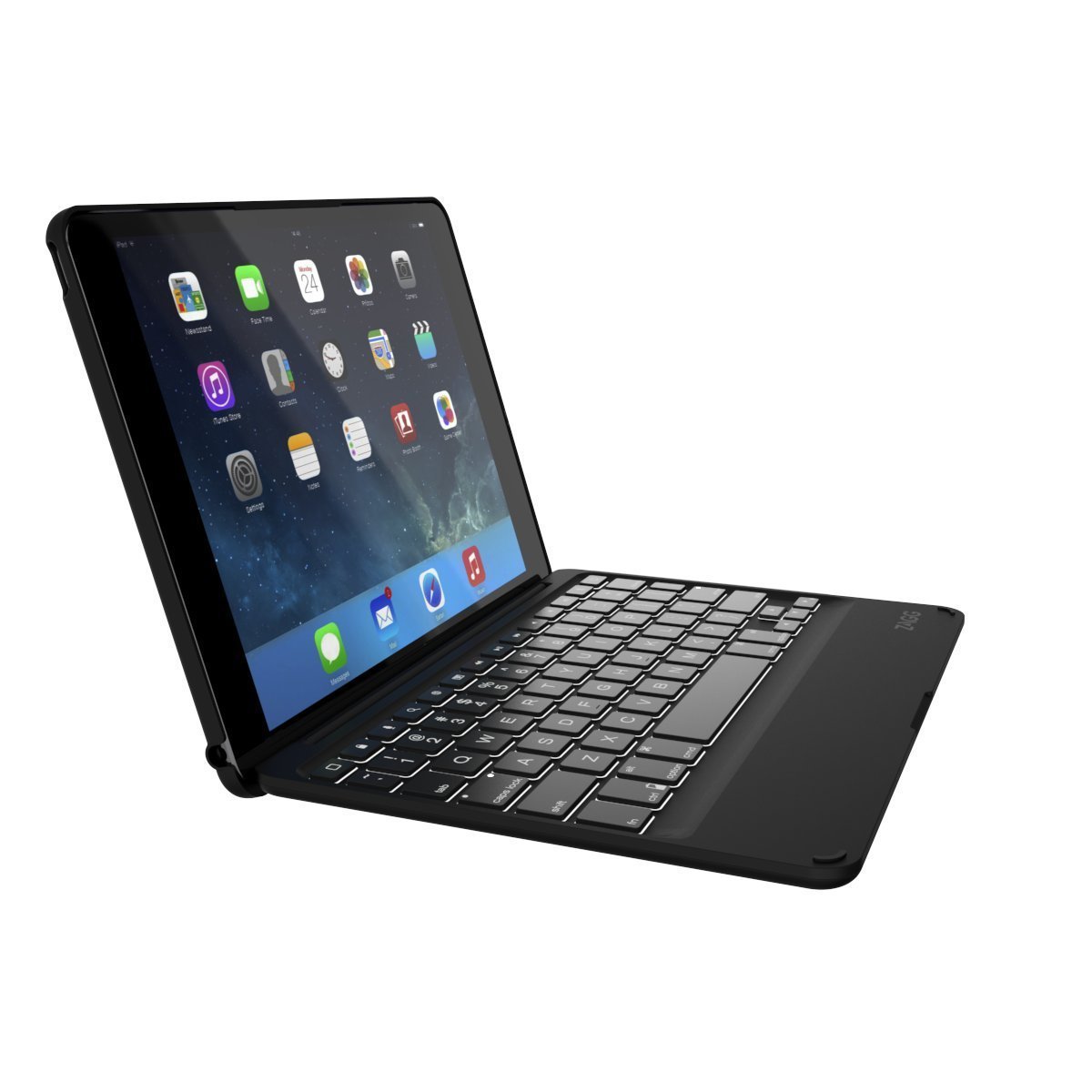 Once you fit the iPad into the plastic receptacle, you will discover that you basically have a laptop here, not a tablet. You can't use your iPad like the tablet it's supposed to be, since you can't fold the hinge around. Even if you were willing to live with that, the whole package ends up feeling a little unbalanced on your lap.

Our review of Zagg Pocket 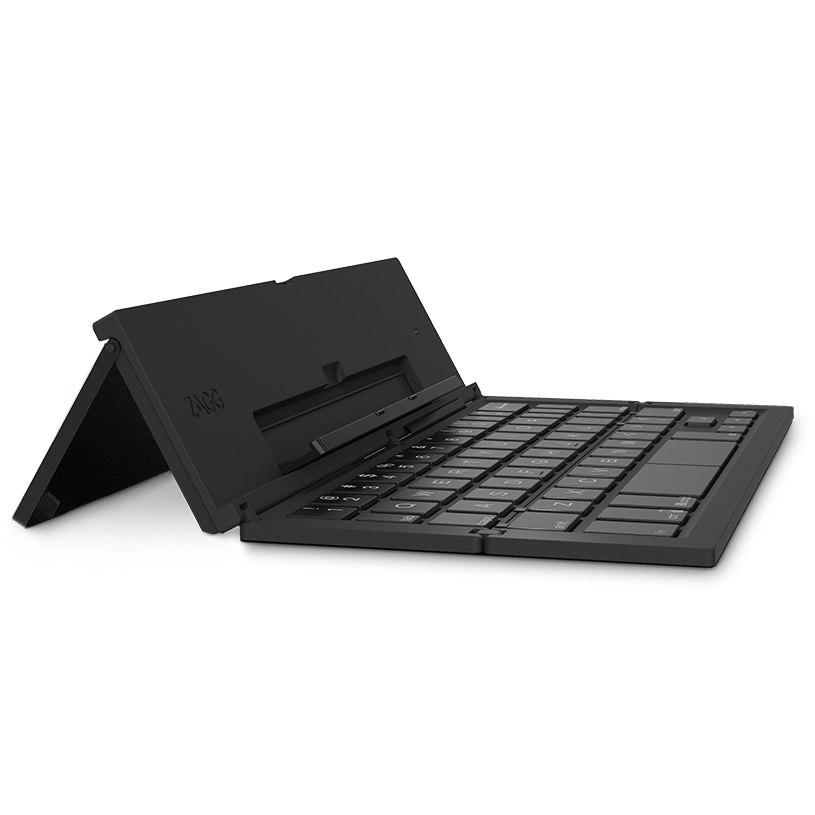 The Zagg pocket seems like a sci-fi wonder: a tiny little keyboard that folds up into an even tinier package (kind of like the old Stowaway keyboards for Palm Pilots, if you're old enough to remember those). But once you actually try to use it, you'll discover that it feels flimsy and does a terrible job of holding up your iPad on anything other than a table.